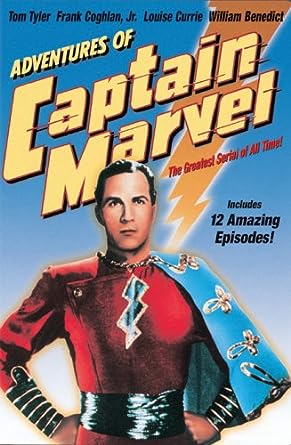 Modern fans might assume the first comic-book superhero to get the movie treatment would have been Superman or Batman. In fact, one of their biggest rivals throughout the 1940s beat both of them to the screen by several years. According to Wikipedia, Republic Pictures did try to make a Superman serial first, but National Periodicals (which later became DC Comics) turned them down. The studio then approached Fawcett Comics, publishers of Captain Marvel, who was introduced shortly after the Man of Steel and quickly became one of the Golden Age’s most popular heroes. The concept that kids flocked to was simple. Orphaned 12-year-old newsboy Billy Batson is selected by a wizard named Shazam to replace him as Earth’s protector. When Billy says the Wizard’s name—an acronym of the assorted gods and heroes who were the source of his power (Solomon’s wisdom, Hercules’ strength, Atlas’ stamina, Zeus’ power, Achilles’ courage, and Mercury’s speed)—he’s transformed by a magic bolt of lightning into Captain Marvel.

The movie version is somewhat faithful to the comics. In a cave somewhere in Thailand, a Billy Batson who looks to be somewhere in his mid-to-late 20s (Frank Coghlan Jr.) is granted the powers of Captain Marvel (Tom Tyler) by the old Wizard (Nigel De Brulier). This Billy works as the radio operator for an expedition into “The Valley of Tombs,” where a bunch of American archaeologists break into an ancient tomb over the objections of the local natives. While Billy finds Shazam and gets his superhero identity, the explorers discover “The Scorpion,” a bug-shaped device that functions as a “solar atom smasher,” concentrating the sun’s rays through a series of lenses into a powerful beam that can destroy human life or turn ordinary objects into gold. The Scorpion, which is placed in a heavily fortified tomb, is one of the local culture’s most sacred objects, so naturally, the white archaeologists just take it for themselves. That draws the ire of a mysterious evildoer also named “The Scorpion,” who is the serial’s villain.

He sets out to reclaim the atom smasher, while the archaeologists divide its many lenses amongst themselves in order to protect it; over the course of the 12 chapters, the Scorpion sends his henchman to retrieve each crucial piece while Billy and Captain Marvel try to thwart his progress. Serials like ‘Adventures of Captain Marvel’ were originally programmed to run in weekly installments at theaters around the country. They weren’t meant to be watched in one sitting—and frankly it shows. The episodes all rely on a handful of tropes (chase scenes, fist fights, cliffhangers) that begin to get awful repetitive over the course of more than three hours of action. If you’re going to watch ‘Captain Marvel,’ your best bet is to do it the way it was intended; in small chunks before other feature presentations. That’ll keep things from getting too stale, and let you bask in the film’s pleasures in smaller, more manageable doses.

Those pleasures are mostly of the two-fisted action variety. ‘Captain Marvel’ was directed by John English and William Witney, who were well-known in their day for their thrilling, stunt-laden serials. This one is no different, and even on a relatively limited budget (and with some bargain basement special effects) they do a very respectable job of conjuring Captain Marvel to life. Some of the stunts are dodgy, but a lot of them still work, like Captain Marvel bursting through walls like they were made out of cardboard (probably because they were made out of cardboard) or breaking rifles over his knee like they’re made out of wax (probably because they were made out of wax). And the fight scenes, which rely on the actors’ and their doubles’ athleticism instead of frenetic editing and shaky camerawork, are fantastic. The centerpiece battle in Chapter 10 between Billy Batson and the Scorpion’s goons, for example, is more fun than anything in ‘Taken 3.’ And there’s at least half a dozen more fights just like it.

There’s less to recommend about the story itself, which is mostly about Billy trying to track down the true identity of the Scorpion. Before too long, he realizes the Scorpion is actually one of the archeologists attempting to subvert the group from within, but he guesses incorrectly several times before the real bad guy reveals himself in the final chapter. (And this guy’s supposed to have the “wisdom” of Solomon? Yeah, no.) There are no clues or any real sense of mystery; it’s mostly just a process-of-elimination guessing game. Again, part of this is the nature of the beast; a serial is meant to be so simple that each chapter can be understood on in its own, in case a viewer happened to catch, say, Chapter 3, at the theater without seeing the first two. It’s easy to see why Republic wanted comic-book heroes for their serials; they’re well-suited to the format. Not only were comics loaded with the sort of action and intrigue that were the serials’ bread-and-butter, but the construct of a hero and his secret identity also served as an effective cost-cutting measure. Most of the film could follow the human alter ego sleuthing or romancing his leading lady, while reserving his costumed personality.