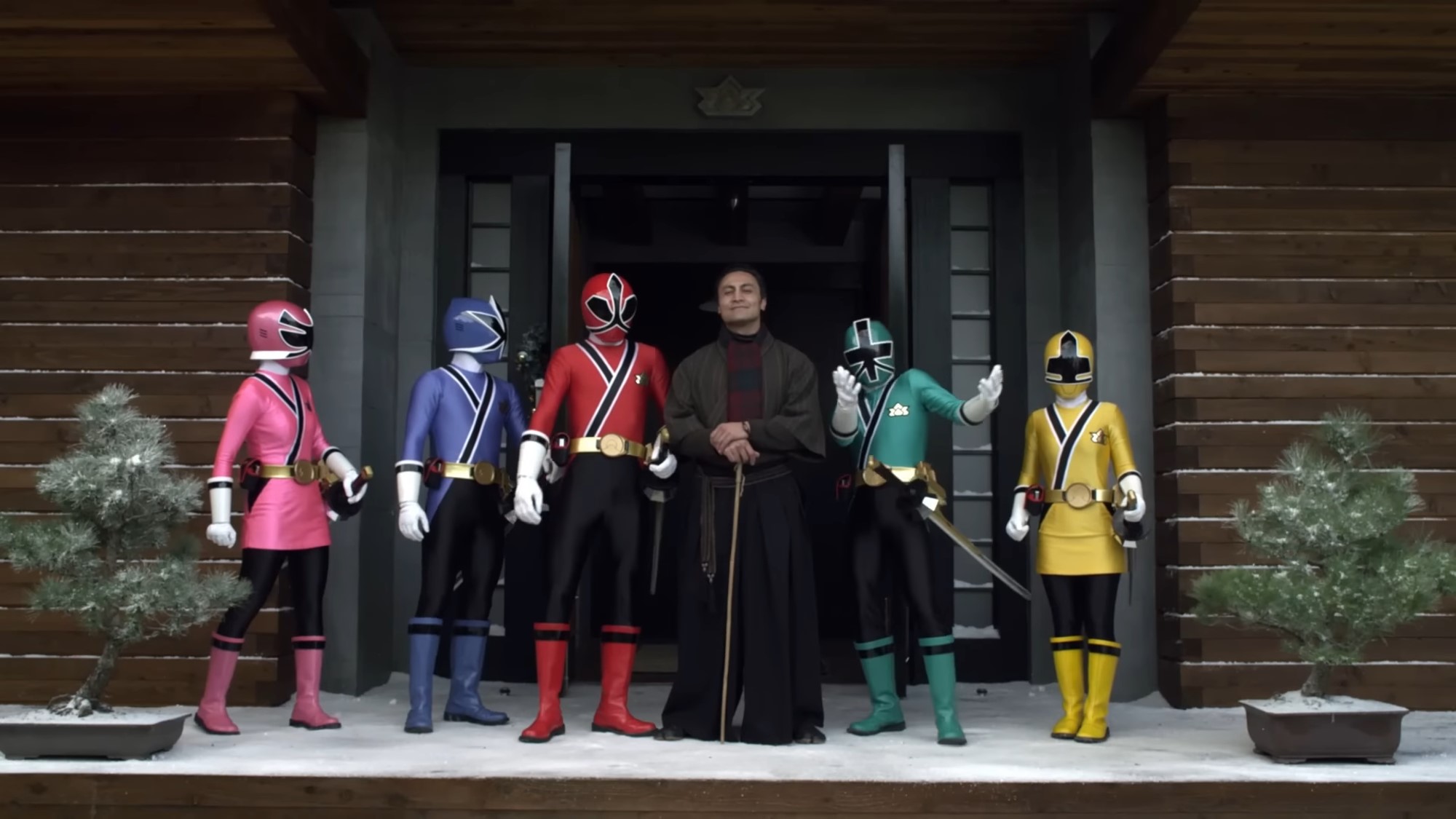 Jii sets up the Christmas Tree, the Rangers fight Gred in a quarry. Mike fights it off and then they destroy it and fight it with the Battlewing Megazord. Once the monster is destroyed, they are stuck in the Megazord and must find a way out. So the flashbacks start. Kevin recalls Antonio programing the Clawzord. Jayden reminds Kevin that Kevin was able to help them with his plans.  At the Shiba House, Mentor Ji opens the door to find Bulk (dressed as Santa) and Spike (dressed as an elf). Spike wants to deliver a present meant for Mia. Jayden remembers the time when Kevin and Mike were stuck together. Mia asks Emily what they should wear for Christmas. Mia remembers the time they went on a shopping spree in the “Strange Case of the Munchies” episode. Bulk asks if ‘drill sergeant’ is at the dojo. We see a flashback of Emily training Bulk and Spike. 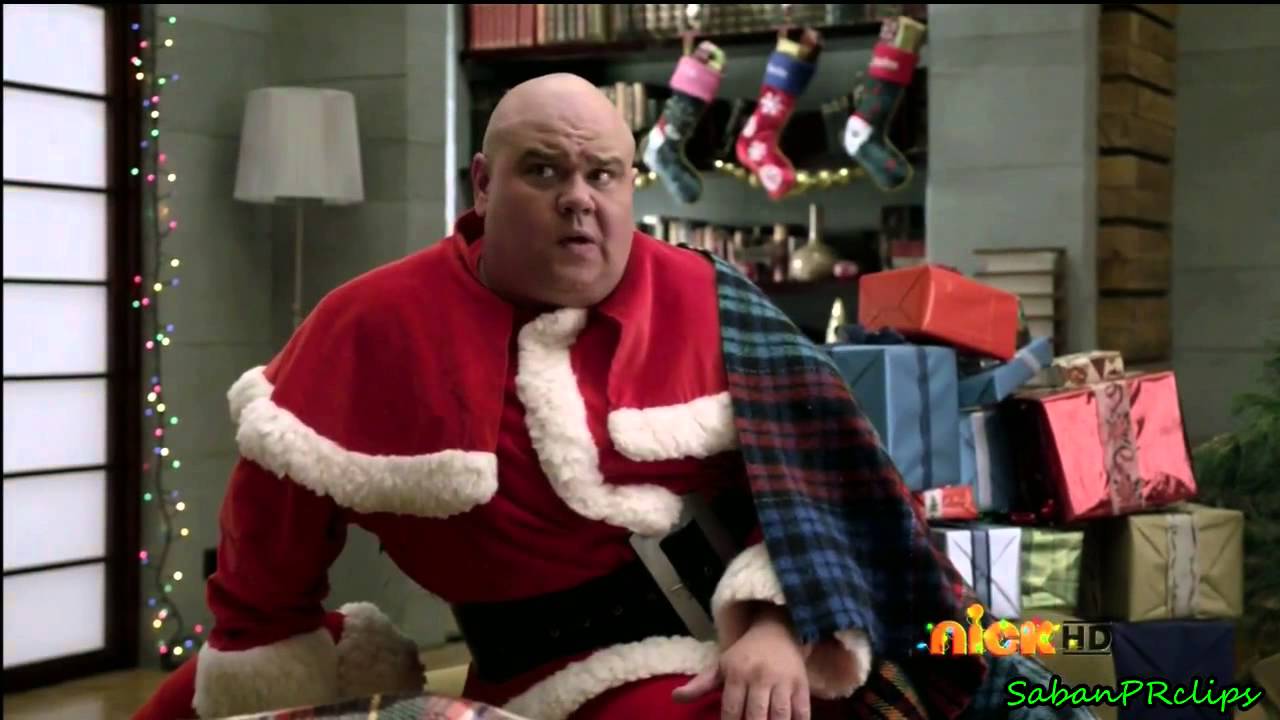 Bulk and Spike help Mentor with the tree. Jayden calls Jii about what is going on. Mia and Emily cheer up Mike with a flashback of Antonio’s concert and when Mike took a pic of Kevin in a ballerina outfit. Spike attempts to put the angel on top of the tree. Bulk and Spike remember the day they saved the cat. Jii tells them they are heroes and gives them cookies. Bulk tells Mentor that they have helped the Rangers. We see a clip of Bulk and Spike running from Moogers. Mentor replies that they are all lucky that the Rangers protect everyone.

Clips of several battles where the Rangers defeat the Nighloks are shown. The Rangers say they owe a lot to Mentor. Mia thinks he is lonely all alone. Spike tells Mentor how he met Mia and she told him to never give up.  Bulk says Mia introduced them to a young fisherman named Antonio. Jii didn’t realize it was so late. Kevin continues on the Megazord repairs. Almost everyone is sleeping.

He fixes the problem with red and green wires, saying it is a Christmas miracle. Emily screams “Merry Christmas.” Jayden calls Mentor that they are on the way. Mentor asks for a quick favor on their way home. Bulk and Spike wake up and want to sneak out before ‘the drill sergeant’ returns. Mentor Ji stops Bulk and Spike and tells them that he has a surprise for them. The Power Rangers (morphed) walk inside the Shiba House, shocking the two, and thank the two for their help. The duo leave happily. The Rangers close the door. We see Santa fly across the moon and then we see Bulk and Spike fly in a motorcycle and they say “Merry Christmas to all.”

Another clipshow episode, but still enjoyable, the highlight was the Bulk, Spike and Jii Story.

In the city, Bulk and Spike admire a bike but can’t afford it. Bulk decides to buy some hot chocolate. At the Shiba House, Ji delivers the Christmas tree. Mia wants to decorate it with pink stuff. Mike tells her that they need to set up the tree first. Mike calls Emily to help out. Emily wants to write her sister a Christmas letter. She starts the email about their memories of the Origins episode. Emily continues with her times with Mike and then writes about Mike’s journey as a Samurai. Emily turns her attention to Mia, who has always been a great role model. She writes about her memories of Mia, including their wedding mission.

Back at the Garage, Bulk prepares to rebuild his old bike for Spike. Back at the Shiba House, the Rangers continue to set up the tree. Mia enters the room and remembers her moments with Jayden. She continues with Kevin’s dedication to the Samurai life. Kevin asks Mia for the tape. They remember Mia’s bad cooking skills. The guys finish the Christmas tree and prepare for egg nog. Emily writes about Antonio and the Gold Ranger in her email. She follows up how they worked as a team and learned to never give up. Back at the Garage, Spike and Bulk talk about their good and bad memories. Emily saves her favorite memory for life: the first time that they morphed. Emily concludes her email and gives her snow globe a final shake. In the morning, the Shiba House is surrounded with snow. Mike wakes his friends up to a swarm of gifts under the tree. Bulk and Skull wake up to a snowy Christmas. Mentor Ji hands out the gifts. The Rangers love their gifts. Mike doesn’t have a smile on his face. Ji reveals Mike’s gift: a motorcycle. Bulk and Spike prepare to head outside. Back at the Shiba house, Mike returns with no bike. He gives up his bike to people that truly need it.

A Nice Christmas episode, that although it is a clipshow it is still fun.

The Samurai Rangers learn to harness the power of the legendary Black Box to form all new Megazord combinations and become Super Samurai!

Through the power of the Black Box, the Samurai Rangers are able to tap into the power of their ancestors and unlock Shogun Mode to help protect humanity from the Netherworld’s vile villains. The Black box also allows the Super Samurai to morph into Super Mega Mode inside the Megazord cockpit, which enhances their powers to aid in the battle against super monsters. In addition, a new super weapon, the Bullzooka, will make its first appearance, harnessing some serious laser power to help in the battle to stop the evil Serrator. And with each new adventure, the day gets closer and closer when Jayden, the “Red Samurai Ranger”‘s secret will be revealed.

The Highlight of Super Samurai is Lauren the True Red Leader, she is both stunning and likable, plus she comes very close to defeating the lead villain.   Super Samurai brings a end to the Samurai Rangers in a fitting  fashion, with the villain defeated at the end it’s nice to imagine what future these heroes have in there daily lives. A new generation of Power Rangers must master the mystical and ancient “Samurai Symbols of Power,” which give them control over the elements of: Fire, Water, Sky, Forest, Earth and Light. Under the guidance of their all-knowing mentor and the aid of their devoted animal Zords, they battle the dark forces of the Netherworld and a mysterious warrior who is bent on destruction.

Season 18 is where Saban took the rights back from Disney. This Season brings us a likable group of heroes, although the Blue Ranger does come across as being on steroids lol. We even get the return of Bulk who has not been seen since season 10.

Many criticize this season for being slow moving , but I feel the season goes at a nice pace. Deker is an excellent villain thou he may not be the big bad of the show, he is a worthy adversary. In volume 3 we get introduced to Antonio, The Gold Ranger a fun addition to the team.

The Season comes to a close with the apparent death of Deker, thou the story continues in Super Samurai