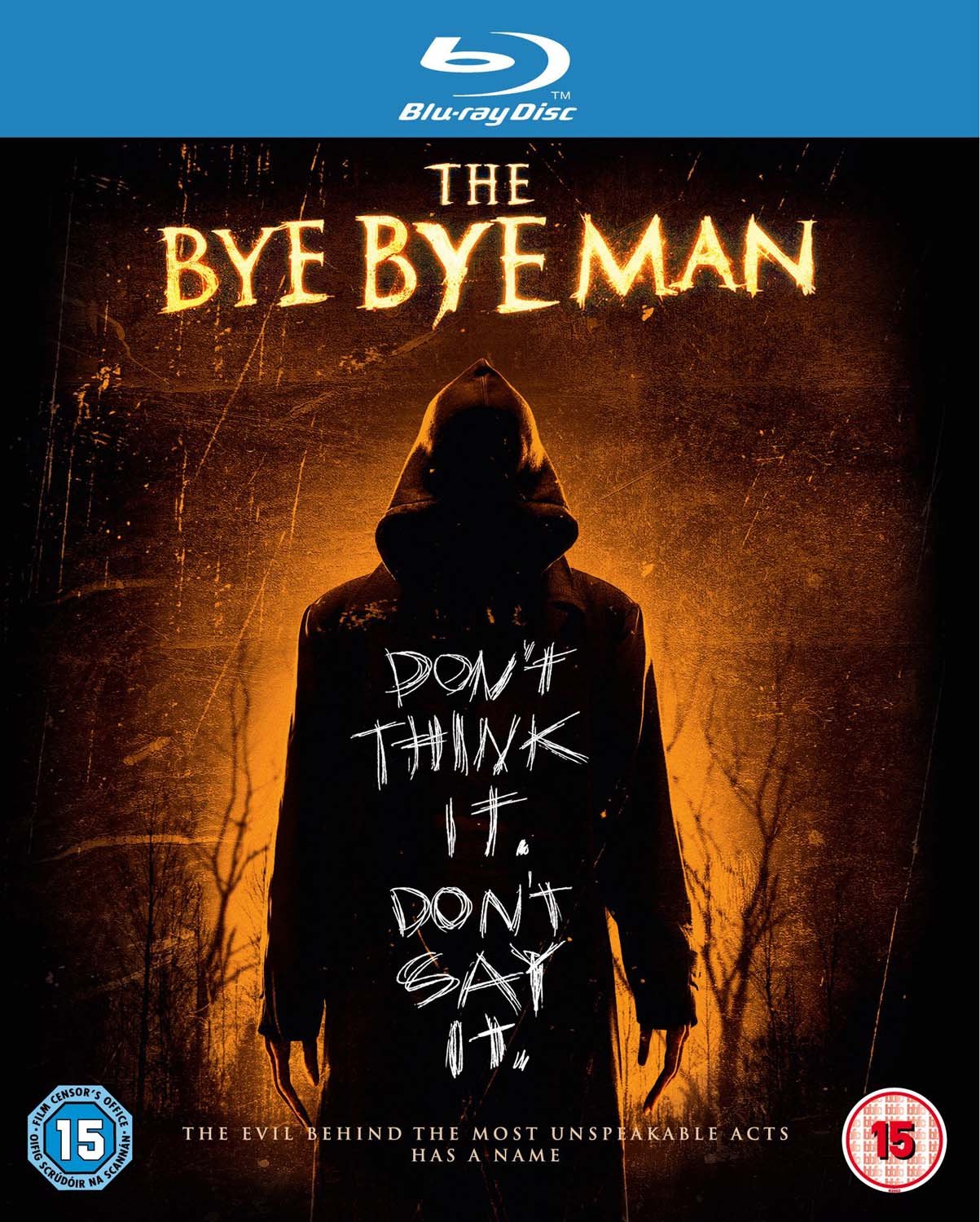 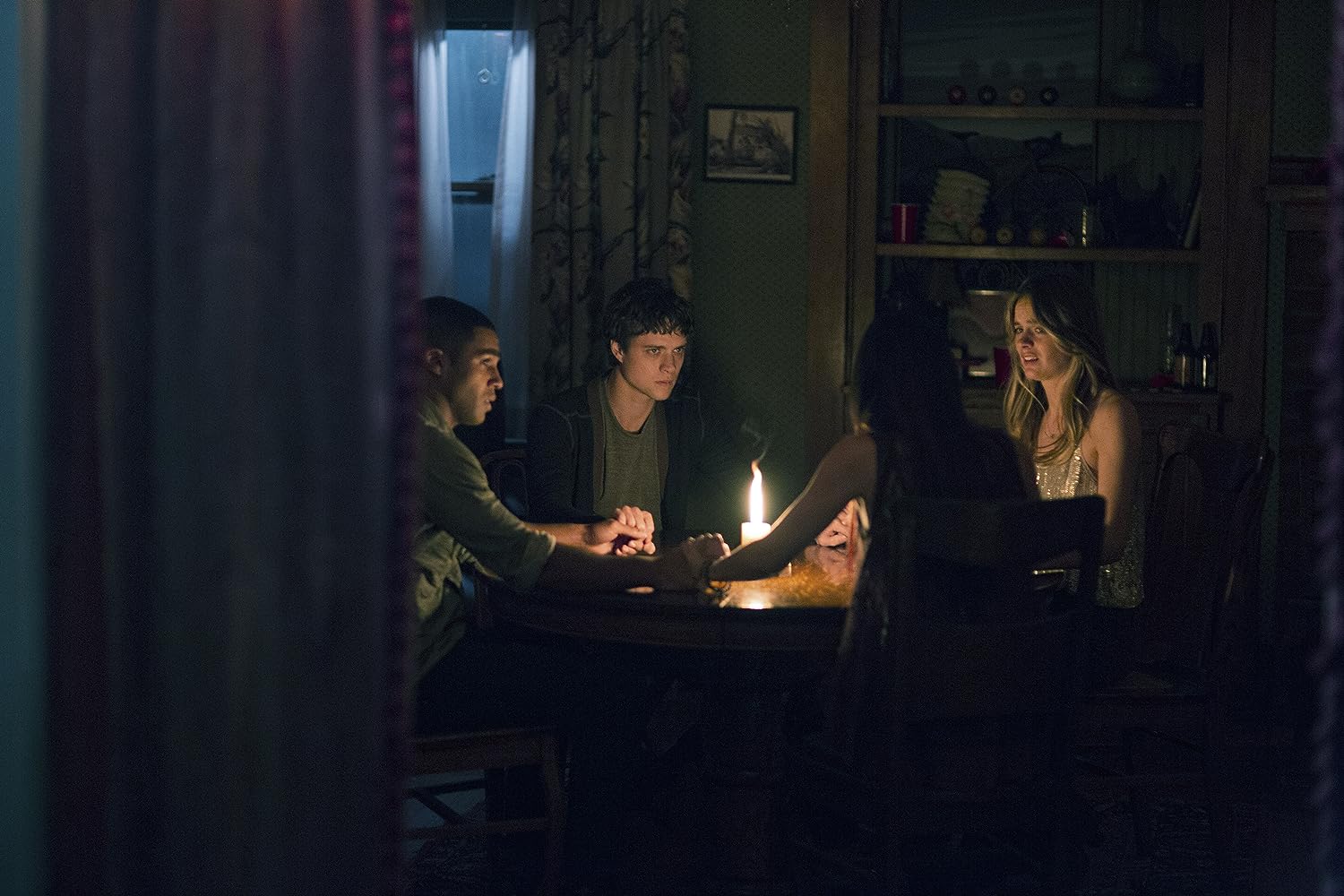 In 1969, a mass murder occurs in which a man kills people on his block. As he shoots the neighbors, he continuously asks if anyone spoke about “the name” which cannot be said. He also repeats the same thing over and over: “Don’t say it, don’t think it; don’t think it, don’t say it.”In present day, Elliot, his girlfriend Sasha, and best friend John move into an off-campus house not far from their college. Soon, mysterious things start to happen, such as Sasha developing a strange cough and Elliot finding coins in a nightstand that continually reappear. Elliot also finds writing consisting of “don’t think it, don’t say it”, and a name: the Bye Bye Man. During a seance involving their friend Kim, the name is mentioned.Sasha continues to become sick as Elliot and John start experiencing hallucinations and stranger activity. Elliot begins to suspect that Sasha is cheating on him with John. Elliot’s brother Virgil also becomes suspicious. Kim is killed after she is struck by a train. Elliot is taken in for questioning by Detective Shaw, and is released when Kim’s suicide note reveals she killed her roommate and was planning on killing Elliot, Sasha, and John.The librarian shows Elliot a dossier about the Bye Bye Man; a teenager killed his family and told a reporter that the Bye Bye Man made him do it. The same reporter later became the mass shooter during the ’60s, who killed himself after realizing people knew about the Bye Bye Man. Elliot also visits the widow of the reporter, who reveals that the curse causes insanity, hallucinations, and eventually death. Signs of his coming are coins mysteriously appearing, sounds of a train, and a large, skinless hound. The only way to prevent it is to not think of his name or speak of him. If someone already knows, they must be killed. The librarian is hit by Elliot’s car by accident, after she killed everyone in her home, coming for Elliot next.Sasha and John are also suffering from the hallucinations. Elliot finds John stabbing Sasha. He shoots John, but after he picks up the corpse, it is revealed to have been Sasha that was stabbing John; therefore, Elliot killed Sasha. The Bye Bye Man appears and gives Elliot a hallucination. Elliot keeps Virgil and his daughter Alice away long enough for him to shoot himself with a gun. Virgil and Alice get away before the entire house goes up in flames.While riding home, Alice reveals she found the coins from the nightstand near the trash, along with the writing. However, she could not read it due to her poor night vision. Detective Shaw arrives at the scene, where John is found to be alive but wounded. He struggles to whisper “Bye… Bye…” but the screen cuts to black before the sentence is finished. 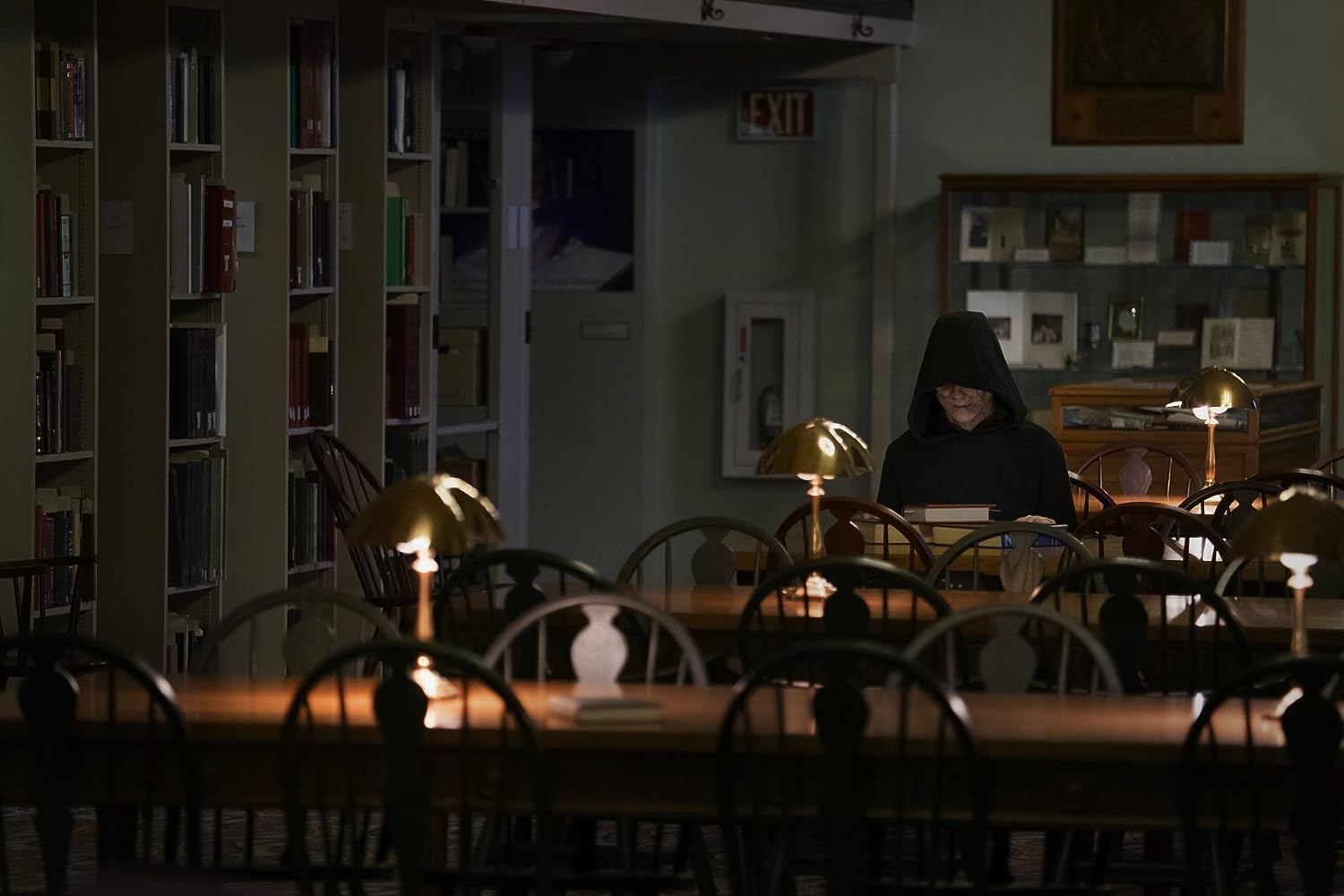 Overall If you are looking for an amazing horror film then this probably isn’t for you. If you want something fairly enjoyable for 90 minutes i can think of worse films to watch. 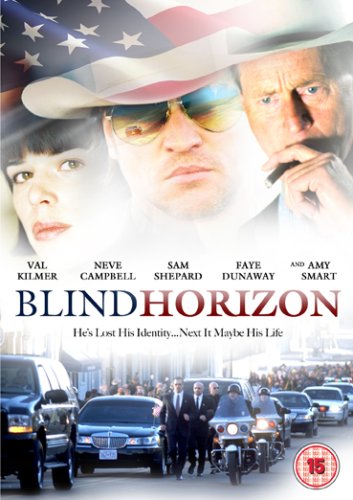 The film begins in the outskirts of rural New Mexico where an unconscious Frank Kavanaugh (Kilmer) is discovered by two local ranch hands. Suffering from a gunshot wound to the head, he is rushed to a nearby hospital in a small town called Black Point. Due to the extent of his injuries, Kavanaugh is placed in an intensive care unit under the care of a trauma nurse named Liz (Amy Smart). After regaining consciousness, Kavanaugh is interviewed by Sheriff Kolb (Shepard), however, because of his head injuries, he is unable to explain what has transpired due to a case of temporary amnesia. Given his condition, Kavanaugh is ordered to stay in the hospital for closer observation.Much to their dismay, Sheriff Kolb and his deputies are unable to find any clues as to what might have happened to Kavanaugh. After a thorough search of the crime scene, Sheriff Kolb returns to the hospital to find that Kavanaugh, in a violent and confused state, is claiming to have knowledge of a possible assassination attempt on the president of the United States. Dr. Conway (Gil Bellows) persuades Kavanaugh to remain calm and later explains to Sheriff Kolb that his paranoia stems from a delusional side effect of the amnesia. Amongst the added confusion, Kavanaugh experiences a myriad of images that could be pure fantasy or actual pre-amnesiatic memories. The most vivid image, one in which a dark, shadowy figure is seen talking with a mysterious woman named Ms. K (Dunaway), hints at various details of a possible assassination attempt involving key government parties. However, because of Kavanaugh’s deranged state, he is unable to differentiate between reality and fantasy. 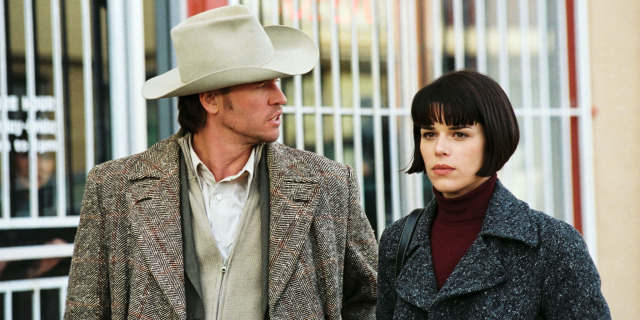 Sheriff Kolb believes that there is some credibility to Kavanaugh’s story and continues to question him. To further complicate matters for Kavanaugh, his fiancée, Chloe (Campbell), arrives at the hospital and makes arrangements for his immediate release. It is then revealed through Chloe that she and Kavanaugh are actually from Chicago and that Kavanaugh works for the IRS. She produces documentation that verifies Kavanaugh’s employment with the government, and further explains to Sheriff Kolb that she and Kavanaugh were in New Mexico on vacation. She also produces a seaside photo of Kavanaugh and herself walking on a beach as further proof that she is his fiancée. Kavanaugh still strongly believes in an imminent attempt on the President’s life and later calls the US Secret Service and warns them of an assassination plot that will occur in Black Point within the next few days. Distraught over his situation, Chloe convinces Kavanaugh to leave the hospital with her, and she drives him back to the motel they had checked into a few days earlier. Incidentally, recent news updates reveal that the President and his campaign team have been touring the Southwest and will arrive in New Mexico within the next few days.As the President arrives and prepares to address the public, Kavanaugh attempts to follow what evidence he has to warn the authorities and avert the assassination. While he views the President from a nearby building, he discovers a set of sniper’s equipment, including a rifle, which he instinctively assembles. Taking aim out of the window, he sights the President through the scope of the rifle, and realizes that he, in fact, is the assassin, and that his flashbacks are of all the preparation leading up to the date of the event. He notices another assassin taking aim at the President with his sniper rifle from the other side. Understanding that he has the power to change the course of events, Kavanaugh aims at the other assassin through his scope and shoots him, killing him and averting the assassination.The directing was well-placed. There were other stories to tell for such a small town and this movie showed them all without leaving the central theme. The mystery unravels bits and pieces at a time; like it should and you never really know for sure what’s going to happen next. Terrific film. 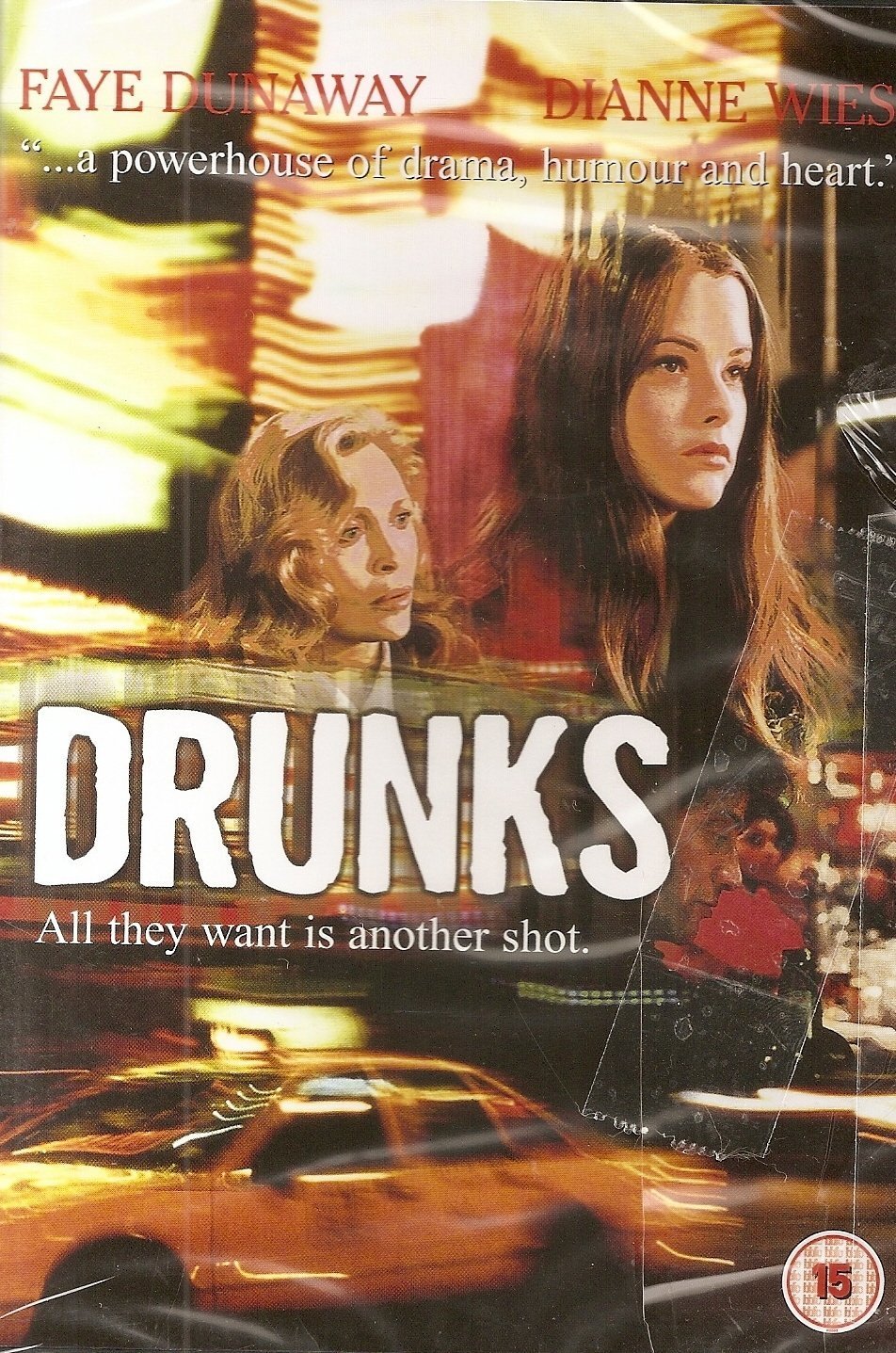 An inside peek at the goings-on of an unusually attractive Alcoholics Anonymous meeting. Richard Lewis’s character exists to provide a moral center for the film as it examines his desperate efforts to stay sober. The various members of the AA group provide different glimpses at what contributes to alcoholism and demonstrate that there is no one profile for what constitutes a drunk. 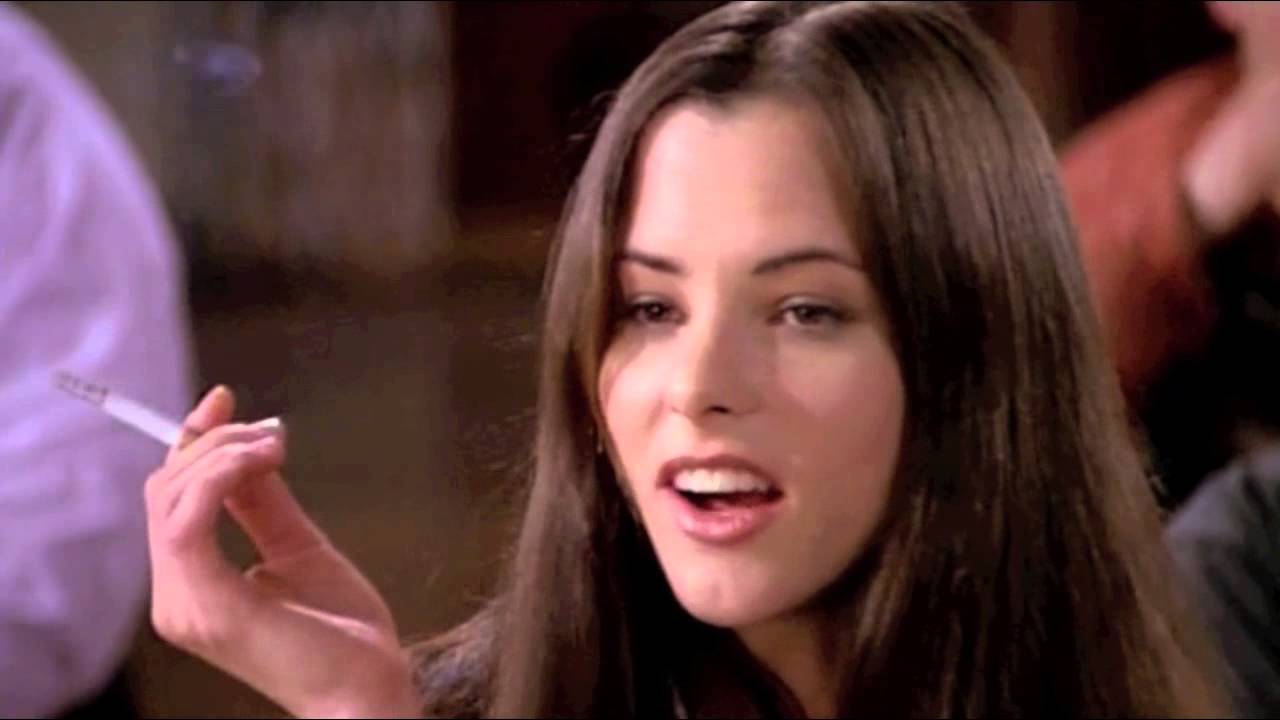 There are very nice performances in this film, particularly those of a pre-Ally McBeal Calista Flockhart and Parker Posey. The film’s scene stealer and the most memorable drunk of all, however, is monologuist Spalding Grey, doing a hilarious turn as a church choir member who shows up at the wrong church. In the midst of explaining his blunder to the group he rhapsodizes brilliantly on the importance of Guinness in his life and discovers quietly that gee, maybe he too has a drinking problem.

Overall the individual performances divert attention from the main storyline and provide more of a center for the film than Lewis, whose story is ultimately uninteresting. But check it out for a young Calista Flockhart.

After accidentally losing the Omegahedron, Argo City’s power source, Kara Zor-El (Helen Slater) embarks on a journey to go recover it before Argo City perishes. Upon arriving on Earth, she discovers she has superpowers and adopts the identity of Supergirl, which she uses to help others while on her quest to recover the Omegahedron.Elsewhere, the Omegahedron has fallen into the hands of Selena (Faye Dunaway), a flunky witch who quickly becomes powerful because of it and who sets her sights on Supergirl, ready to eliminate the Girl of Steel the first chance she can get. Can Supergirl recover the Omegahedron before Argo City goes dark and Selena is victorious? 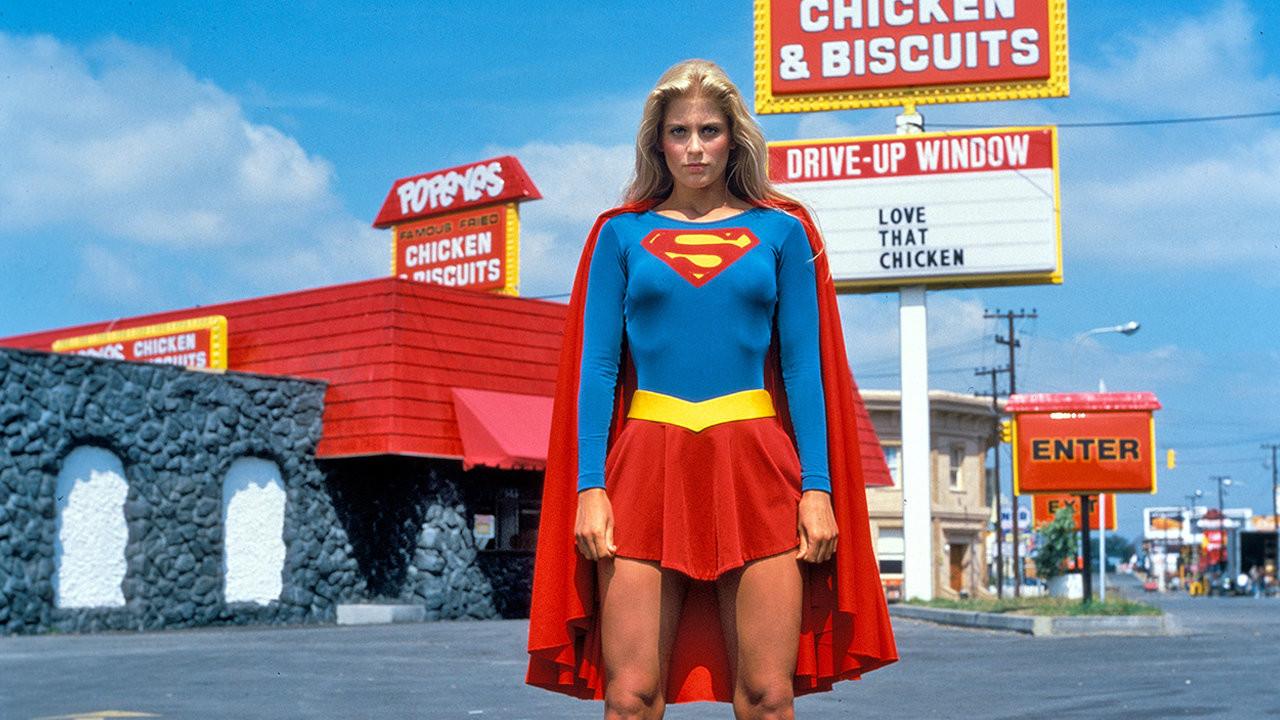 This flick is every bit a part of my childhood as the Superman movies were. At the time, of course, I was too young to understand the story, but now older, it’s not too bad. Sure, it has some flaws and continuity issues, but at its heart it’s the story about someone trying to right a grievous mistake, something that most of us can relate to.

The visuals and hints of Kryptonian mythology put forth quickly link it to the Superman movies—Supergirl identifies herself as Superman’s cousin while in costume, and also as Clark Kent’s cousin when she’s in disguise as Linda Lee; her supersuit is basically the Christopher Reeve costume from the waist up—and it has a cinematic score that carries a similar heroic tone to that of its male counterpart. Likewise, Marc McClure reprises his role as Jimmy Olsen from the Superman movies and appears as Lucy Lane’s boyfriend (Lucy is Lois Lane’s younger sister). 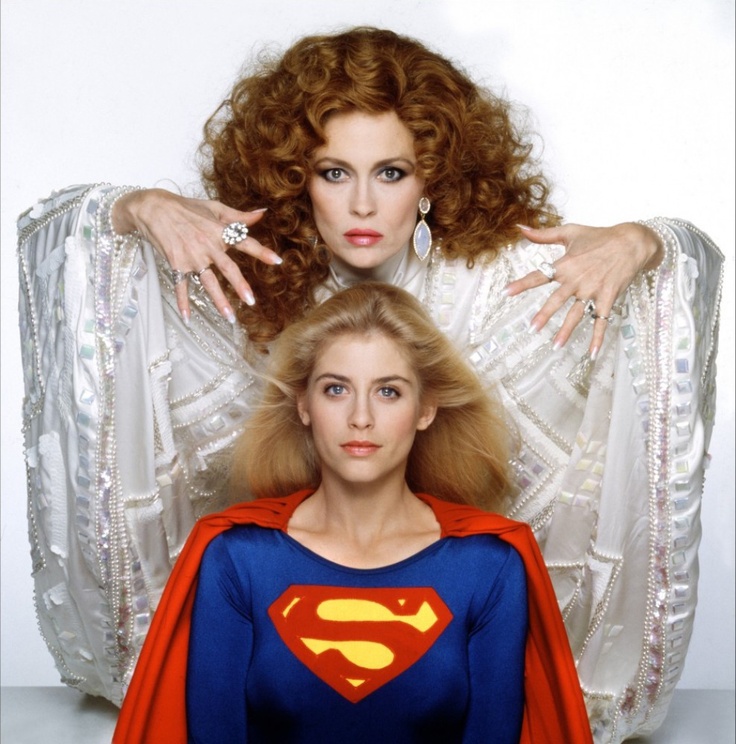 They seem to want to jump right into Kara being Supergirl so don’t give an explanation as to why she leaves Argo City in that bubble ship in one outfit then transforms inside the ship and flies out of the water in her supersuit, but whatever. They do a good job of showing her discovering her powers, the joy of having them, and also the satisfaction of using them for good.  As hopeful and cheery as this flick is at times, it’s also equally dark thanks to Selena being a witch. There is a ton of occult imagery. The pacing was pretty decent and each obstacle Supergirl must overcome as the movie rolls along keeps getting bigger and bigger until the end when it seems all hope is lost and even the Girl of Steel is helpless. What was especially cool is during the time of Supergirl’s tenure on Earth, Superman was elsewhere in the galaxy doing his thing, so when the story wraps up, Supergirl asks those who knew of her presence to forget she was there and flies off triumphant back to Argo City. This, of course, kept the two super franchises separate while still linking them.

In the end, Supergirl is an overall enjoyable flick that is from a time before superhero movies got all dark and gritty, the hero was filled with angst and turmoil, and it enjoys itself for what it is: a movie about a girl who can fly.