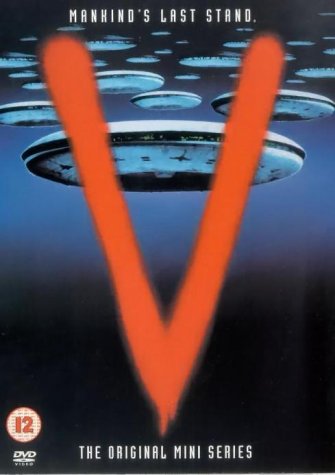 Down from the clouds lumber a horde of value-sized flying saucers that creep eerily across the skies before parking over the population centers of the world. Earthlings cower below, their puny fighter jets utterly unable to approach even one of the craft, when finally, a message emanates from the invaders: “How y’all doin’?” Turns out they’re visitors from somewhere near Sirius, who just stopped by for a few billion cups of some mineral we’ve got that’d save their dieing planet. In exchange, they won’t kill us, er, they’ll give us technology. Weird thing is these rather ordinary looking folks don’t seem much like space aliens except that when they talk they sound like they’re on crummy cell phones and they insist on wearing cheesy Blue Blocker shades. Things are great until a nosey reporter by the name of Mike Donovan (Marc Singer) stows aboard the ship hovering over Los Angeles and comes face to scales with the truth.The visitors are Giant Lizards masquerading as Earthlings, and they are none too pleased when Mike tries to out them live on NBC. But it’s Fugitive City for TV boy when his transmission is blocked, and the Visitor propaganda machine somehow twists the incident around as part of their sinister scheme to brand the world’s scientific minds as conspirators and terrorists. Someone’s got to prove that resistance is no where near futile and whup some over-grown horny toad hiney, and that somebody might as well be Killer Blonde, M.D. (Faye Grant).V was an analogy of World War II, and it works really well. This mini series started it all and went on to spawn another Mini Series and two TV Shows.