The film focuses on several characters. One of the main protagonists, Dean (Justin Long), has been a waiter for four years since graduating from high school, and has not earned a degree during his four years at a community college. When Dean learns from his mother that a former high school classmate, Chett (Travis Resor), now has a bachelor’s degree in electrical engineering, he begins to rethink his direction-less life. Dean’s lecherous friend and co-worker, Monty (Ryan Reynolds), is in exactly the same situation, but has accepted that his future lies with the restaurant, Shenaniganz. Monty is put in charge of training Mitch (John Francis Daley), a newly hired waiter who is constantly interrupted throughout most of the film before he can speak, usually by Monty. Also working with Dean is Calvin (Robert Patrick Benedict), a hopeless romantic who cannot urinate in public, and Dan (David Koechner), the uptight manager who is grooming Dean as his protégé. Rounding out the staff are 17-year-old hostess Natasha (Vanessa Lengies), abrasive waitress Naomi (Alanna Ubach), waitress (and Monty’s ex-girlfriend) Serena (Anna Faris), Dean’s girlfriend and fellow waitress Amy (Kaitlin Doubleday), stoner busboys T-Dog and Nick (Max Kasch and Andy Milonakis), head chef Raddamus (Luis Guzman), the insane, unsanitary chef Floyd (Dane Cook), lesbian bartender Tyla (Emmanuelle Chriqui), and the pensive and philosophical dishwasher Bishop (Chi McBride).

The waiters preoccupy themselves with endless gossip, complaining about the customers, seeking covert revenge on particularly rude or annoying patrons, and playing a special kind of game which involves flashing genitalia at a fellow worker (the “Penis Showing Game”). Each employee has his or her own problems and stories, which are interwoven with the ebb and flow of business. A common phrase used throughout the film, which is referred to in the Shenaniganz training video is “The only thing different between extraordinary and ordinary, is that little bit of extra!” This phrase is mocked by many of the wait staff during the film.

Minutes before the restaurant closes, however, Chett and his girlfriend come in for dinner and leave Dean a hefty tip out of pity. This prompts Dean to quit his job—turning down an assistant manager position Dan offered him at the beginning of the film—to seek a more promising future. When the shift ends, the staff head to a party at Monty and Dean’s house. At the party, Monty is able to resist having sex with Natasha (although he says they will have sex the following Wednesday, when she will be 18), Calvin attempts to fix his relationship problems, and Mitch bashes most members of the staff after being constantly interrupted throughout the day. He concludes by giving them all The Goat from the “Penis Showing Game”, which Raddimus had told him earlier that if it is achieved, will instantly grant the man god-status. Sure enough, Monty swears his undying allegiance to him, telling Dean he’s been “replaced.” The film ends with the staff talking about the incident with Mitch, and Dan showing up at a disgruntled customer’s house after Natasha gave him the wrong address to the party.Not claiming to be high brow or anything other than a fun comedy with some sick scenes and a clear message to those intending to be rude to their waiting staff…. if you like films along the lines of American Pie then you will love this….ing 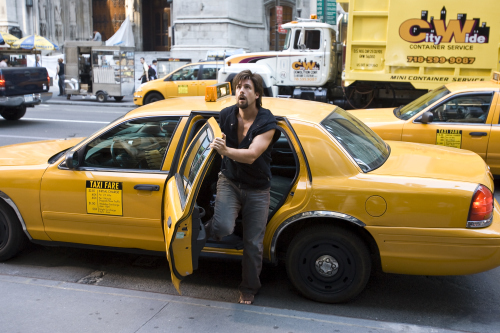 I went into Zohan not expecting anything but pure frivolous humor. You don’t go into films like this with any expectations, and I think that’s where a lot of the reviewers prior to myself went wrong. They went in expecting to see an evolution of Sandler’s humor, and while I would say that Zohan raised the bar a tad, it’s still Adam Sandler. Yes, it’s going to have a corny ending, a lot of physical humor.

I found Zohan funny I think  a lot of the other reviewers missed, is that the film in no way expected to take itself seriously. The only serious moments were cheesy, predictable, and ultimately corny, which is irony in itself and only contributed to my bemused chuckling. Yes, a lot of the humor bordered on racial stereotyping, there were a lot of over-the-top accents and allusions to the Middle East, so if you’re the type to get touchy about that, feel free to skip. I found it to be a rather hilarious joke on the seriousness that everybody applies to the stereotyping. The stereotyping is, actually, rather fair and towards the end even shows plenty of good stereotyping. 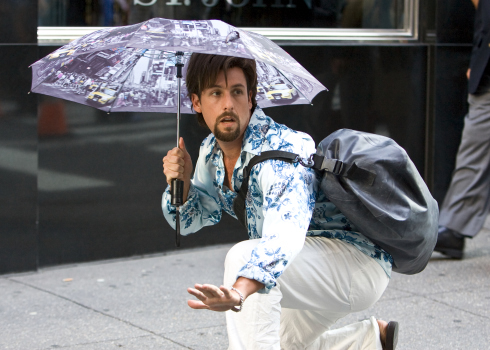 If you want to spend an hour or two snickering and have an open mind, give Zohan a shot. Don’t expect an evolution of comedy. Don’t expect the bar to be raised, because that’s not what this film was trying to do. It was trying to be ridiculous and make people laugh.