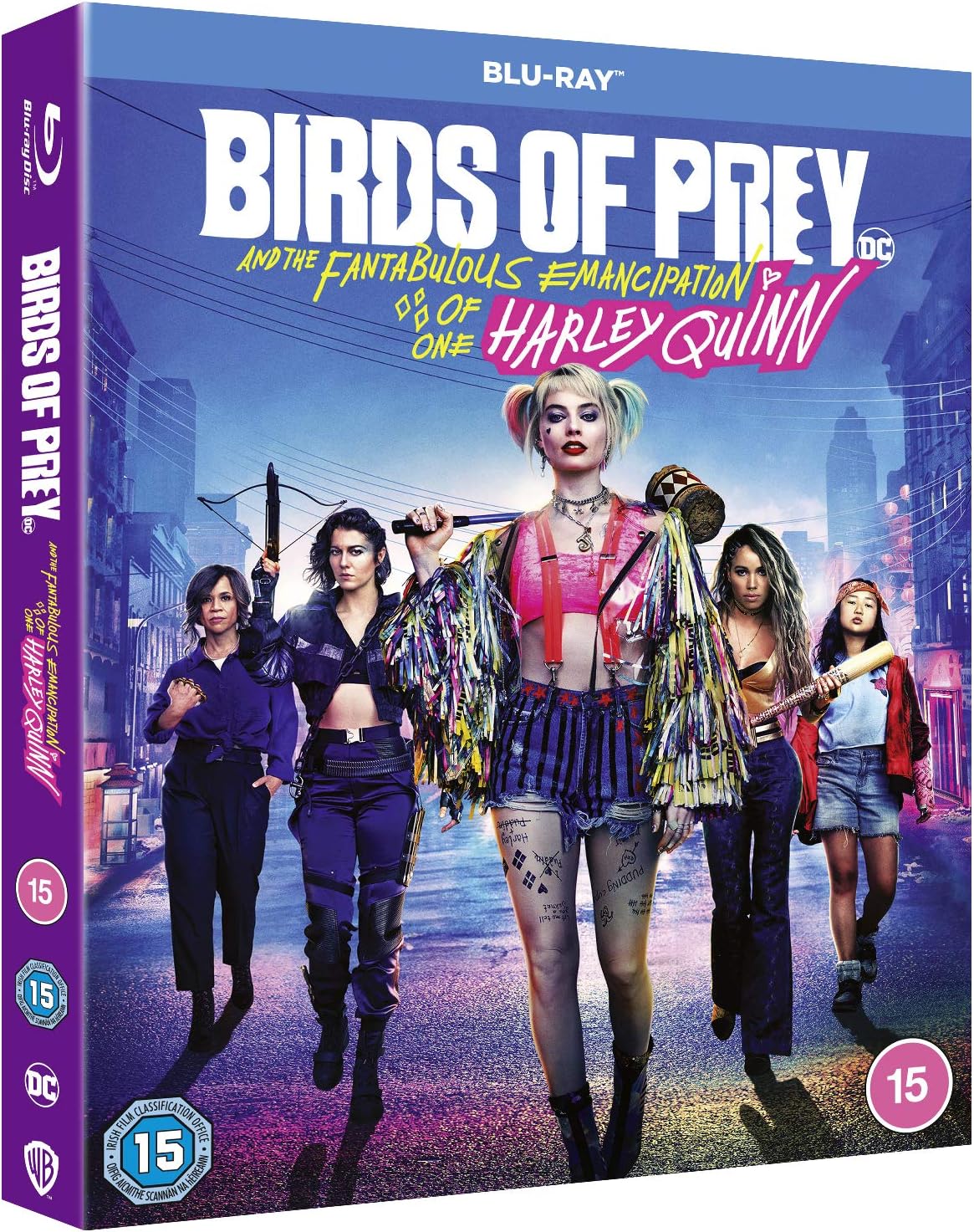 Sometime after the Enchantress’ defeat, the Joker breaks up with Harley Quinn, throwing her out on the streets of Gotham City. She is taken in by Doc, the elderly owner of a Taiwanese restaurant, and recovers from her relationship by cutting her hair, adopting a spotted hyena (whom she names after Bruce Wayne), and taking up roller derby.One night, Harley gets drunk at a nightclub owned by gangster Roman Sionis, and cripples Roman’s driver after he insults her. She then meets burlesque singer Dinah Lance, who later rescues an intoxicated Harley from an attempted abduction; that night, Harley blows up the Ace Chemicals plant where she pledged herself to the Joker years prior as a way to publicly announce their breakup. Spotting the scuffle from his bedroom, Roman is impressed by Dinah’s skills and appoints her as his new driver. Meanwhile, GCPD Detective Renee Montoya investigates a series of mob killings carried out by a crossbow-wielding vigilante. Finding Harley’s necklace at the scene of the Ace Chemicals explosion, Montoya notes that Harley is in danger without the Joker’s protection. She approaches Dinah about being an informant on Roman for them, but Dinah rejects the offer.Roman sends Dinah and his sadistic right-hand-man Victor Zsasz to retrieve a diamond embedded with the account numbers to the fortune of the Bertinelli crime family, who were massacred years ago. Young pickpocket Cassandra “Cass” Cain steals the diamond from Zsasz, but swallows it after she is arrested. Harley, fleeing from Montoya and several other people she had wronged in the past, is captured by Roman’s men. Zsasz informs Roman that Cassandra has the diamond, and Dinah warns Montoya about the situation. As Roman tortures Harley and prepares to have her killed, she offers to recover the diamond for him. Roman agrees but also places a bounty on Cass to shake up the competition. Breaking into the GCPD with a variety of firework-inspired non-lethal grenade launcher rounds, Harley frees Cassandra and the pair escape to the evidence warehouse. They are ambushed by a number of thugs, but manage to kill them all.After escaping from the evidence warehouse, Harley and Cassandra bond while hiding out at the former’s apartment. Doc is approached for information by the “crossbow killer”, who is revealed to be Helena Bertinelli. Having survived her family’s massacre and becoming trained as an assassin, Helena has been targeting each of the gangsters responsible for her family’s murders, preferring the moniker of “The Huntress”. Quinn’s apartment is later bombed by criminals looking for Cass, and Doc sorrowfully reveals that he betrayed Harley, selling them out for money. Harley calls Roman and offers to turn Cassandra over in exchange for his protection, agreeing to meet at an abandoned amusement park (mostly one of the Joker’s former hideouts). Dinah notifies Montoya of the rendezvous, while Zsasz notices Dinah’s treacherous text message en route to the park and informs Roman. Devastated by Dinah’s betrayal, Roman dons his ritualistic mask from which he gets his villainous nickname, “Black Mask”.At the park, Montoya confronts Harley, but Harley knocks her out of a window. Zsasz arrives and tranquilizes Harley before holding Dinah at gunpoint, but he is killed by Helena, who reveals Zsasz was the last of her family’s killers. Montoya returns and a stand-off ensues, until they realize Roman has arrived with a small army of masked criminals, known collectively as the False Face Society. Using Quinn’s old gear, the makeshift team successfully withstand and repel their attack. During the battle, Cass is captured by Roman, while Dinah reveals her metahuman ability of supersonic-level screaming, defeating an additional number of mobsters aligned with Roman.

Harley gives chase on roller skates, and with assistance from Helena, the pair pursue Roman. At a nearby pier, the final confrontation occurs. Taking aim at a shadowy figure in the distance she believes to be Roman, Harley wastes her last bullet as Roman appears from behind the figure, which is revealed to be a statue. Roman holds Cassandra hostage and prepares to kill her. However, Cassandra pulls the ring from a grenade she had taken from Harley’s weapons chest earlier, slipping the grenade in Roman’s jacket. Harley throws Roman from the pier just before the grenade detonates and kills him.In the aftermath of destroying Roman’s criminal empire, Montoya quits the GCPD. With the money within the accounts hidden inside the diamond, she joins Dinah and Helena in establishing a team of vigilantes – the Birds of Prey. Harley and Cassandra escape, selling the diamond itself to a pawnshop and starting their own contract killing business. In a post-credits audio sequence, Harley is about to reveal a secret about Batman, but the film ends mid-sentence.After Suicide Squad split DC fans down the middle, one might’ve assumed that Harley Quinn’s story in the DCEU was over. It wasn’t. Birds of Prey delivers a stunning new look at the DCEU. It’s additions of Black Canary, Huntress, and Renée Montoya provide a new type of character develop that we’ve never seen in DC movies before. In addition to Black Mask, this badass team of superheroes provides a perfect blend of insanity, awkwardness, and that feeling of total badass you get from watching the team plow through Black Mask’s entire army. Of course, I couldn’t close off this review without mentioning Margot Robbie’s stellar performance as the siren herself. Nobody else could possibly pull off Harley like she does.