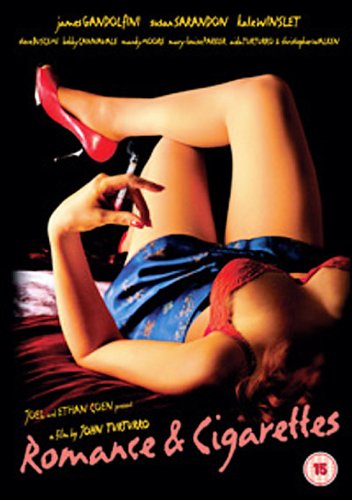 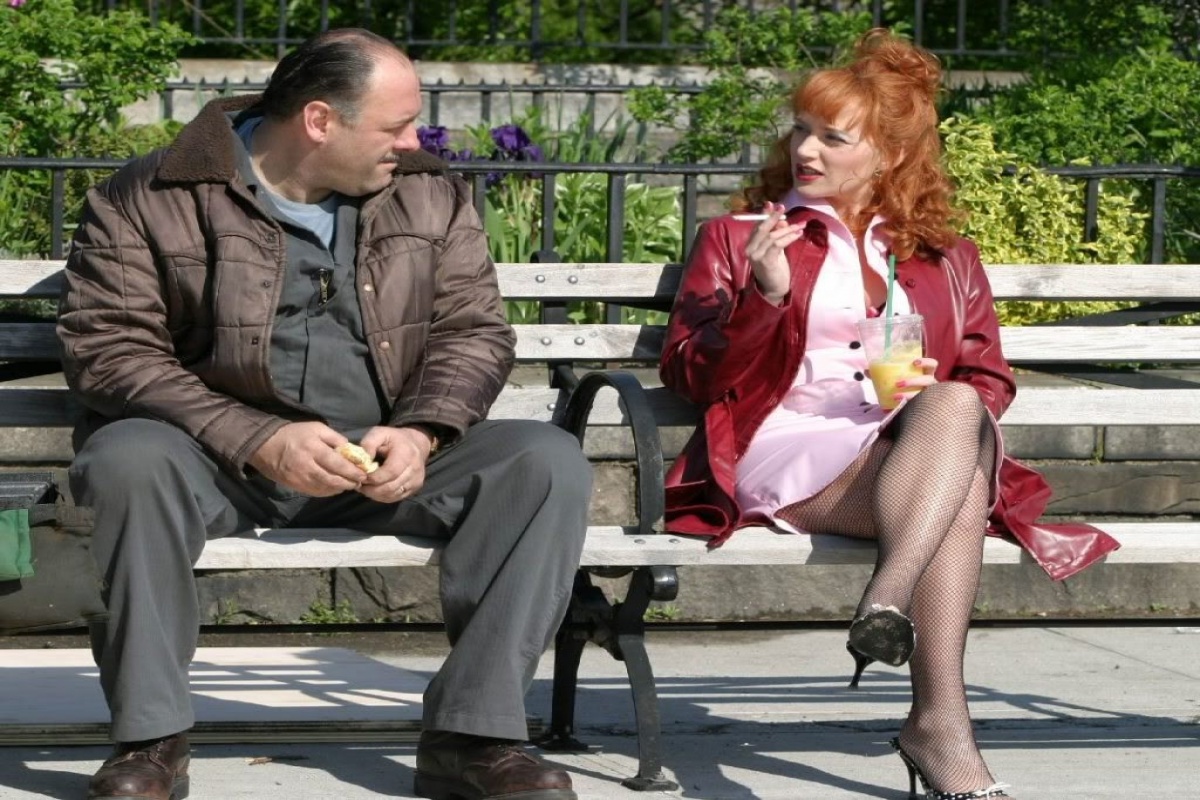 This film is fresh and original and, when at its best, extremely and surprisingly funny.  Gandolfini plays Nick Murder, a man who loves his wife Kitty (Sarandon), but can’t seem to lay off the women on the side – the one He’s now with, Tula (Winslet) – is a fiery redhead. Right at the start there’s an argument and a near fight, and the rest of the film becomes a rumination and celebration of love and lust and other crazy things involved with the human heart, leading up to redemption.

There’s a certain quality to Romance and Cigarettes that marks it as a pop-marked must-see, a picture with terrific songs. There’s an exuberance that Tuturro reaches for that he achieves like few who’ve made musicals in the past several years; his actors, however much they do or don’t seem to be singing with the songs playing on during the numbers, are into the groove, the abstract/surreal quality that at times makes it like a whacked out extended dream sequence on the Sopranos.

Kate Winslet is astoundingly good here in a part that requires her to be tart-tongued but not a floozy, sophisticated in a manner of speaking even if the ‘girl on the side’. She gives it her all.A brilliant film that takes you unawares with it’s originality and energy. Terrific soundtrack and wonderful, hysterically funny, dance sequences.

Charlie Cantilini (Jennifer Lopez) is a temp/dog walker/yoga instructor and aspiring fashion designer from Venice Beach, California, who meets doctor Kevin Fields (Michael Vartan). She thinks he’s gay at first, based on a lie Kevin’s former girlfriend Fiona (Monet Mazur) told her. But then Kevin asks her out, and Charlie believes that she’s finally found the right man. Things start to go wrong when Kevin introduces Charlie to his mother, Viola Fields (Jane Fonda). Viola is a former newscaster who has recently been replaced by someone younger, and is in the midst of a meltdown. Loathing Charlie from the outset, Viola becomes even more distraught when Kevin proposes to Charlie. Fearing that she’ll lose her son the same way she lost her career, she sets out to ruin Kevin and Charlie’s relationship. With Ruby (Wanda Sykes), her assistant, she tries everything possible to drive Charlie away.

Charlie eventually catches on to Viola’s plan and fights back. On Charlie’s wedding day, Viola turns up wearing a white dress instead of the peach-colored dress specially made for her. This leads to a violent stand off between the two, leading with Viola refusing to accept Charlie and states she’ll never be good enough for Kevin. Suddenly, Viola’s own dreadful mother-in-law, Kevin’s grandmother, Gertrude Fields (Elaine Stritch), appears and they have an indignant argument, while Gertrude takes a liking to Charlie, saying she is stunning, her grandson is a lucky man, that she is an “exotic Latina”, and if only her son, Kevin’s father, was as lucky to find a woman like Charlie. Gertrude’s resentment of Viola bears a strong resemblance to Viola’s feelings of animosity toward Charlie. Gertrude even believes that Kevin’s father had died years ago of “terminal disappointment,” for which Gerturde holds Viola responsible. Viola counters stating Gertrude “smothered him to death” because she thought nobody was ever good enough for him(basically similar to how Viola is). Gertrude, satisfied she got her last word in, leaves; showing she still favors Charlie. Charlie decides to back down as she witnesses Gertrude and Viola’s relationship. “Nothing’s going to change,” she laments to Viola after Gertrude leaves the room, “In thirty years that will be us.”

Charlie exits to tell Kevin that the wedding is off. But before that can happen, Ruby enters and talks with Viola. Viola is miffed that Charlie compared her to Gertrude, although Ruby points out that Viola is actually far worse than Gertrude, as she doesn’t ever recall Gertrude trying to poison Viola once, referring to earlier at the rehearsal dinner when Viola put crushed nuts (which Charlie is highly allergic to) in the meal’s gravy. Ruby points out that Viola’s efforts against Charlie to make Kevin happy are unwarranted. “Whatever made you think he wasn’t?” is her final point. Viola has an epiphany and realizes that she wants Charlie to stay, and they reconcile, which ends the feud. Charlie then explains to Viola that she wants her to stay, too, on one condition: if Viola accepts the boundaries Charlie needs, if she is present at any family event, and if she treats her children with love. Charlie and Kevin then get married and when Charlie throws her wedding bouquet, Viola catches the flowers. As Charlie and Kevin drive away to their honeymoon, the film ends as Viola and Ruby walk out of the celebration.

The two central characters are both strong women so it makes for some big confrontations and funny moments as they try to get one-up on each other. There is a good support cast too. It is very enjoyable to watch on repeat viewings.