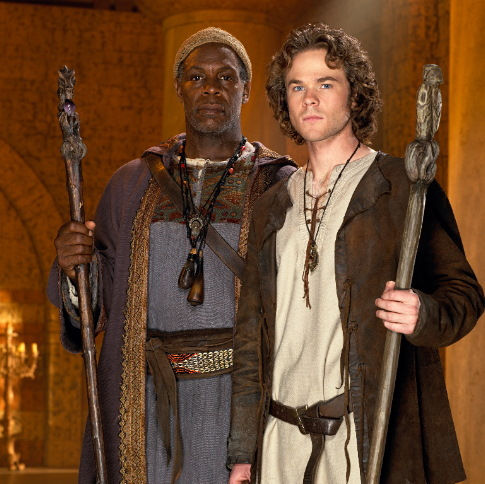 In the land of Earthsea, a young wizard named Ged has visions about a girl and doors opening. Meanwhile, King Tygath wants to rule the land and release the Nameless Ones, demons from whom he hopes to learn the secret of immortality. He sends men to attack Ged’s village, in search of the wizard of prophesy (Ged). Ged learns his first spell from an elderly woman. When the invasion comes, Ged uses a mist spell and lures the invaders over a cliff, saving the village. However, Ged also falls off the cliff.  Tygath tries to convince High Priestess Thar to release the Nameless Ones, but she refuses. She is poisoned by Rosa, her attendant who has been tricked by the king’s lover, Kossil, every time she has tea.

A magus named Ogion arrives at Ged’s village and revives Ged. He tells Ged his true name and takes him for training, but Ged is too impatient; he is sent to the magic school on Roke. There he meets the bully, Jasper, and befriends a student named Vetch. Ged shapeshifts into a hawk to show off. Jasper then challenges him to raise a spirit from the dead, leading him to accidentally release a Nameless One. The demon attacks Ged before being driven away by the Archmagus, who tells him that this Nameless One will hunt Ged down and try to possess him, using Ged’s power for further destruction. Ged must go somewhere in hiding until he can find its true name and destroy it.With the help of Jasper, King Tygath takes control of the magic school. He throws a knife at the Archmagus, apparently killing him and making Jasper the new Archmagus.

With the help of Ogion, Ged confronts the Gebbeth and attempts to drown him using a rock, however, it escapes with Ged’s likeness and voice. Ged’s impersonator becomes a murderer, and Vetch, a magus himself, chases Ged until he realizes Ged is not possessed by the Gebbeth and they decide to hunt it together. They are attacked by the dragon, Orm Embar, but Ged uses the dragon’s true name to bind him and ask three questions. He wastes his first question, but with his second, he learns the Gebbeth’s location. The dragon tells him where to find the two pieces of the Amulet of Peace, which when reunited would save Earthsea, but Ged could have asked the true name of the demon. Meanwhile, Thar appoints a successor, Tenar, and tells her the incantation to release the Nameless Ones. Kossil strangles Rosa and frames Tenar, leading to her imprisonment.

Ged and Vetch return to Roke for help in decoding the dragon’s riddle. The Archmagus survived Tygath’s attack and made the real Jasper into a village fool as punishment. He sends Ged and Vetch to unseal the Nameless Tombs on Atuan, but Ged is captured and brought before Thar, who mistakes him for an evil wizard. In the labyrinth, Ged is locked in the cell next to Tenar. They break free and recognize each other from their visions. Thar realizes her mistake right before her death. Kossil tries to force Tenar to reveal the incantation and fails, so Tygath kills Kossil and follows Tenar to the gate of the Nameless Ones.  Vetch finds the tomb first and is taken by the Gebbeth. Ged encounters Tygath in the labyrinth and fights him but then escapes into the tomb. He encounters the Gebbeth and realizes its true name is his own, because it is the darkness in himself. The demon is absorbed into Ged, making him whole again and strengthening him to strike Tygath in the tomb. Tygath forces Tenar to release the Nameless Ones with the incantation. The Nameless Ones are released and take Tygath into the sky before flying off. Ged reveals part of the key is the second half of the amulet. The Amulet of Peace is made whole, dispelling the Nameless Ones with a bright light and restoring peace to Earthsea. Ged is seen victorious with Tenar and they kiss.

I haven’t read the books, But this is very decent fantasy film. The story and charecterisation was strong throughout.