In Texas in the year 1858, the Speck brothers, Ace and Dicky, drive a group of black slaves on foot. Among the shackled slaves is Django, sold off and separated from his wife, Broomhilda von Shaft. The Speck brothers are stopped by Dr. King Schultz, a German dentist-turned-bounty hunter from Düsseldorf, who asks to buy one of the slaves. When he questions Django about his knowledge of the Brittle brothers, a group of outlaws for whom Schultz is carrying a warrant, Ace becomes irritated and threateningly aims his shotgun at Schultz. Schultz, a superior gunslinger, immediately kills Ace in return and leaves an injured Dicky at the mercy of the newly freed slaves, who kill him and follow the North Star to freedom.

As Django can identify the Brittle brothers, Schultz offers Django his freedom in exchange for help tracking them down. After hunting down the Brittles, the liberated Django (who adopted the surname “Freeman”) partners with Schultz through the winter and becomes his apprentice, and Schultz discovers that Django has a natural talent of being an incredible crack shot. Schultz explains that he feels responsible for Django since Django is the first person he has ever freed, and felt more obliged to help Django (whom he described as a “real-life Siegfried”) reunite with Broomhilda. Django, now fully trained, collects his first bounty, keeping the handbill for good luck.

In 1859, Django and Schultz travel to Mississippi, where they learn the identity of Broomhilda’s owner: Calvin J. Candie, the charming but cruel owner of the Candyland plantation, where slaves are forced to fight to the death in brutal wrestling matches called “Mandingo fights”. Schultz, expecting Candie will not sell Broomhilda if they ask for her directly, feigns interest in purchasing one of Candie’s prized fighters for far more than the normal price. Schultz and Django meet Candie at his gentleman’s club in Greenville and submit their offer. Intrigued, Candie invites them to his ranch at Candyland. After secretly briefing Broomhilda, Schultz claims to be charmed by the German-speaking Broomhilda and offers to buy her.

During dinner, Candie’s staunchly loyal house slave, Stephen, becomes suspicious of Schultz and Django’s motives. Deducing that Django and Broomhilda know each other previously and that the sale of the Mandingo fighter is a ruse, Stephen alerts Candie and admonishes him for his greed. Candie is angered at being fooled and having his time wasted, but contains his anger long enough to theatrically display his knowledge of phrenology, which he uses to theorize why the slaves have failed to kill their oppressors, despite ample opportunity. Candie’s bodyguard, Butch Pooch, bursts into the room with his shotgun trained on the two bounty hunters, and Candie explodes in anger, threatening to kill Broomhilda. He offers an alteration of the original deal, with Broomhilda taking the Mandingo fighter’s place at the same price, and threatens her death should the deal be rejected. After business appears concluded, Candie insists that the deal be sealed through a handshake, which Schultz initially refuses but eventually appears to concede. However, Schultz snaps and kills Candie with a concealed derringer. Butch shoots Schultz dead and Django kills him in turn, and an extensive gunfight in the mansion between Django and Candie’s henchmen ensues. Django guns down a great number of his opponents, but surrenders when Broomhilda is taken hostage. 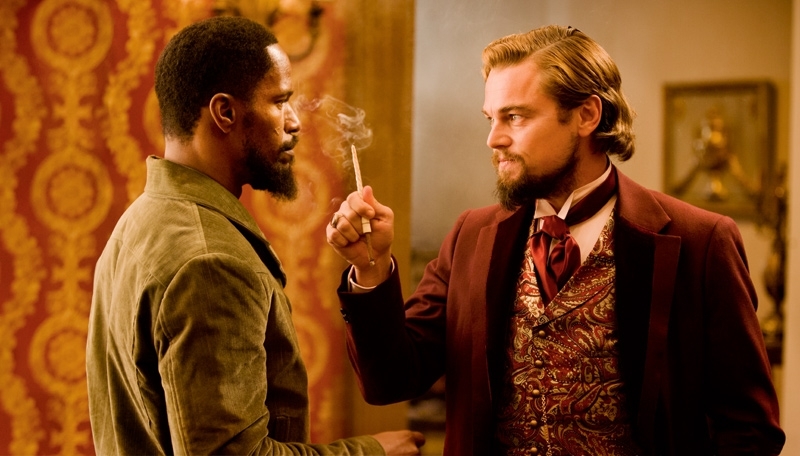 The next morning, Stephen tells Django that he will be sold to a mine and worked to death. En route to the mine, Django proves to his escorts that he is a bounty hunter by showing them the handbill from his first kill. He convinces them that there is a large bounty for criminals hiding at Candyland, and promises that they would receive the majority of the money. The escorts release him and give him a pistol, and he kills them before stealing a horse and returning to Candyland with a bag of dynamite.

Returning to the plantation, Django kills more of Candie’s henchmen, takes Broomhilda’s freedom papers from the dead Schultz’s pocket, bids goodbye to his late friend and frees Broomhilda from a nearby cabin. When Candie’s mourners return from his burial, Django kills the remaining henchmen and Candie’s sister Lara Lee Candie-Fitzwilly, releases the two remaining house slaves, and kneecaps Stephen. Django then ignites the dynamite that he has planted throughout the mansion, and he and Broomhilda watch from a distance as the mansion explodes with the incapacitated Stephen inside, before riding off together.

A brilliant movie. Very entertaining and I loved it. We don’t get many westerns any more so this was a welcome addition to the genre. Tarantino is of course well known for the violence in his films, which renders them as not being for the squeamish, but on top of that they usually feature touches of levity to brighten up the more grisly proceedings. Above all he assembles highly accomplished actors and good stories with some great lines. The cinematography is superb and the music excellent. Oh, and there is some wonderful horsemanship. An excellent film which can be highly recommended.

I enjoyed how this film opened with the scenery, the titles and music like something from the past when Westerns were seemingly always being made. And as you start to watch the film you do notice that it is quite clichéd, trying to evoke all those good old Westerns, albeit with added comedy.

The actual story is a romance and a good guy fighting a baddie, all standard formula for this genre, and it has to be admitted that there is some great comedy here. The place is Arizona, the year is 1882 and Arthur has just lost his girlfriend to the moustachioed owner of the moustache salon. But when Arthur meets a woman new to town he finds her giving him assistance with his girlfriend leaving him, but what secret is she hiding?

This does fall flat at times when for instance Arthur starts going on about the different ways to die in the West and some of the dialogue is way too modern for the period, which does annoy at times. However there is some brilliant comedy such as the prostitute played by Sarah Silverman who is sleeping with everyone in town, but like a good Christian girl doesn’t want to sleep with her boyfriend until after marriage. The wonderful Silverman gives us some great dialogue with the things she gets up to when working. With some excellent sight gags which crop up every now and then we can quite plainly see that life can be very dangerous, even when you are just standing around or helping to move an object.Not a great movie but just a good movie to pass some time.