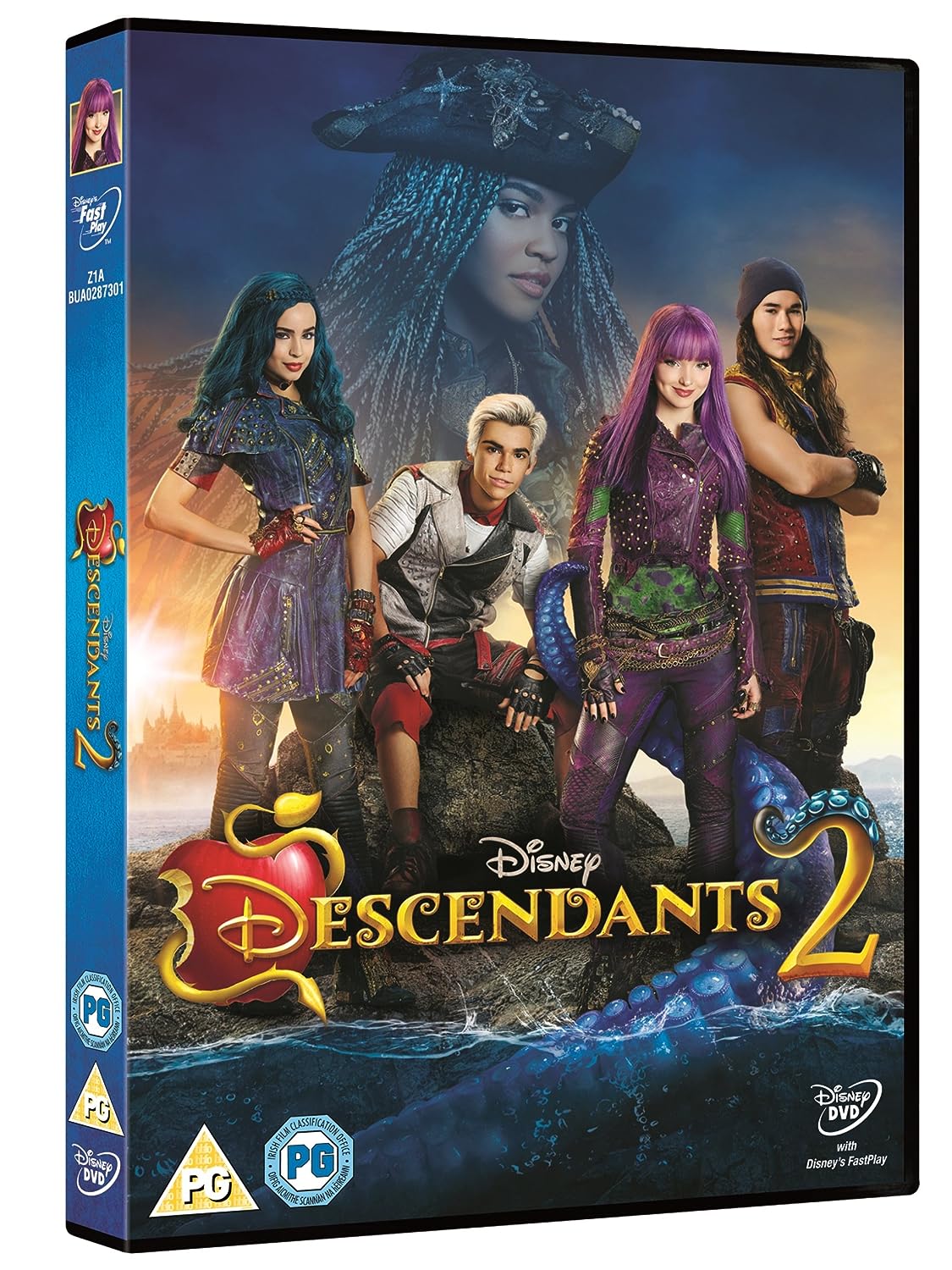 Mal struggles with her new celebrity life as the girlfriend of King Ben, dying her hair blonde, and maintaining a princess-like personality that she is uncomfortable with. She admits her issues to her friends Evie, Carlos, and Jay, but they are content with their new lives in Auradon and do not wish to return to the Isle of the Lost. Evie scolds Mal for relying on her mother’s spell book to solve her issues. Carlos, wishing to ask Jane to the upcoming Cotillion dance, turns to Mal for help to be honest with her. Mal gives him a sweet that will make him speak the truth, but his dog Dude eats it, magically speaking the truth in English and very frankly as a result.Ben eventually discovers Mal’s reliance on magic, and she comes clean about her insecurities, causing the two to have a falling-out. Mal returns to the Isle, now ruled by her former friend Uma, Ursula’s daughter, along with Harry and Gil, the sons of Captain Hook and Gaston. Mal visits hair stylist Dizzy Tremaine, Drizella’s daughter, who restores her signature purple hair, saying she felt that Mal’s blonde hair was unnatural. Harry discovers Mal has returned and informs Uma.Ben, Evie, Jay, and Carlos learn of Mal’s departure and sneak onto the island to find her, but Gil recognizes them. Ben confronts Mal, who rejects his feelings for what she thought was both his sake and Auradon’s. Ben leaves dejected, only to be captured by Uma, who orders Mal and her friends to retrieve the Fairy Godmother’s wand or Ben dies. Carlos and Jay return to Auradon Prep, where they create a replica of the wand using a 3D printer. They are caught by Lonnie, Mulan’s daughter, who blackmails them into letting her come with them, having previously been rejected from Jay’s sports team based on her gender.Uma speaks with Ben, bitter that she and the others were not chosen to go to Auradon. Ben takes this into account and invites her to Auradon, but Uma instead plots to make her own way there. Mal’s group return, handing over the fake wand in exchange for Ben, but Uma realizes it is a forgery. The group flee back to Auradon, but Mal and Ben’s relationship is still on the rocks. The villains’ children come to terms that they cannot run from their pasts and agree to be honest with themselves and each other. Carlos confesses to Jane but struggles a little bit, while Jay appoints Lonnie as the captain of his team.Aboard a ship during the Cotillion, Ben stuns everyone by appearing with Uma, who he declares as his true love and announces he will destroy the barrier on the Isle. Jane unveils a stain glass display Ben commissioned to show his affection for Mal, who realizes he loved her for who she was all along. Suspecting Uma has given him a love potion, Mal confesses her love for Ben and kisses him, breaking the spell. Feeling infuriated, Uma leaps into the water, using Ursula’s magic seashell to transform into an octopus, Mal fighting back by transforming into a dragon. Ben intervenes, quelling the battle, and Uma returns the ring, that Ben had originally given her, when he had declared her as his true love, and swims away despite his offer still standing. Mal and Ben reunite, Mal surrendering her spell book over to the Fairy Godmother. Mal and Evie request that Dizzy be allowed to attend Auradon Prep. When she is given the offer, Dizzy accepts it immediately. In a post-credit scene, Uma addresses the audience, promising that the story is not over.You may think that sequels aren’t good as the first ones but Descendants 2 is the exception. We get to see more chemistry between the characters and the movie isn’t just focused on Mal, we finally get to know more about the other characters’ feelings. The choreography, the songs, the plot, for me, are way better than the first movie. Don’t judge the movie just because it’s a Disney Channel Original Movie if you give it a chance you may like it. 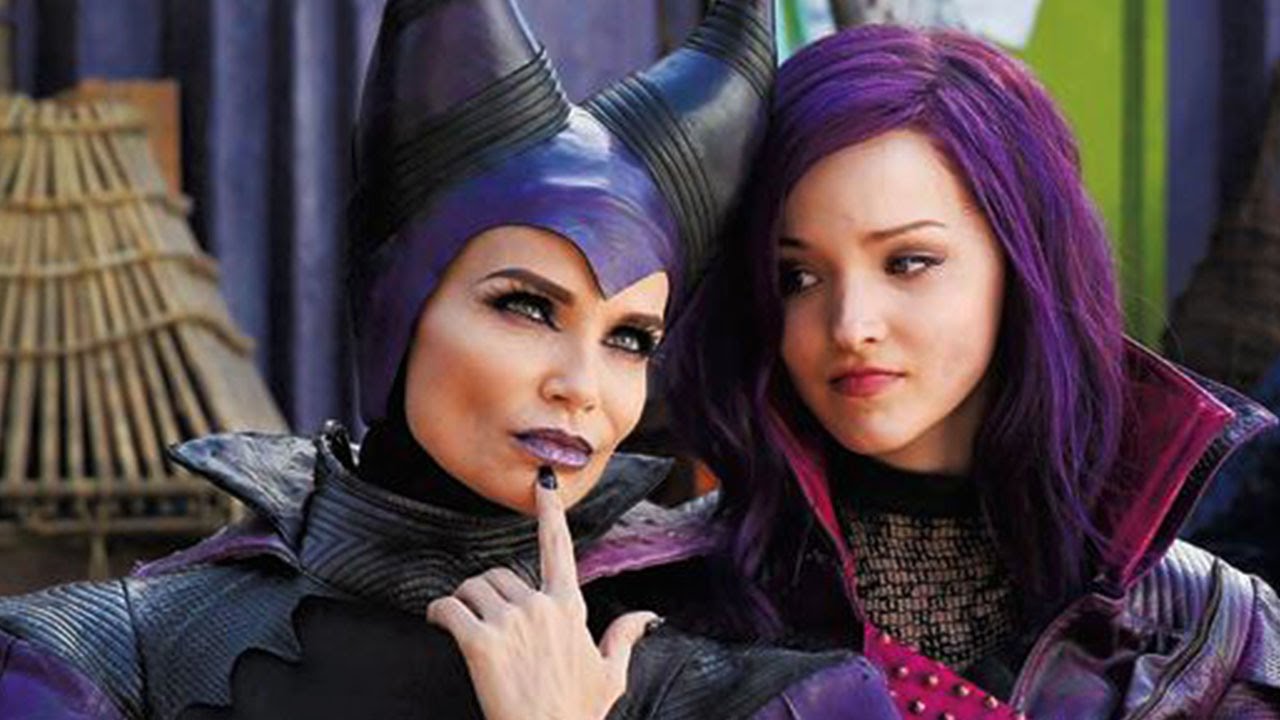 After their wedding, Belle and Prince Adam form the United States of Auradon from the surrounding kingdoms, creating a prosperous new nation, and are elected King and Queen. The kingdom’s enemies are imprisoned on the Isle of the Lost, a slum where magic is forbidden and surrounded by an inescapable barrier. Twenty years later, Prince Ben is to ascend the Auradon throne and informs his parents that his first proclamation will give the Isle of the Lost’s children the chance to live in Auradon away from the influence of their villainous parents. On the island, Maleficent instructs the four chosen children to find and steal the Fairy Godmother’s magic wand to release the villains. The children, those of the Evil Queen, Jafar, Cruella de Vil, and Maleficent, are Evie, Jay, Carlos, and Mal. Travelling to Auradon Prep, the four meet Ben and his self-proclaimed girlfriend Audrey, daughter of Princess Aurora, and the Fairy Godmother, who is the school’s headmistress. Evie uses her mother’s pocket-sized magic mirror to locate the magic wand, located in a nearby museum, but they fail to steal it. Learning the Fairy Godmother will use the wand during Ben’s coronation, the four wait it out by attending classes but start to fit in with the students. Jay is recruited into the school’s “tourney” team (a football-like sport), while Carlos surpasses his cynophobia by befriending the school mutt Dude. Evie, though intelligent, acts vain to impress Chad Charming, son of Cinderella, but ends up doing his homework for him. Dopey’s son Doug encourages her to not pander to others and be herself. 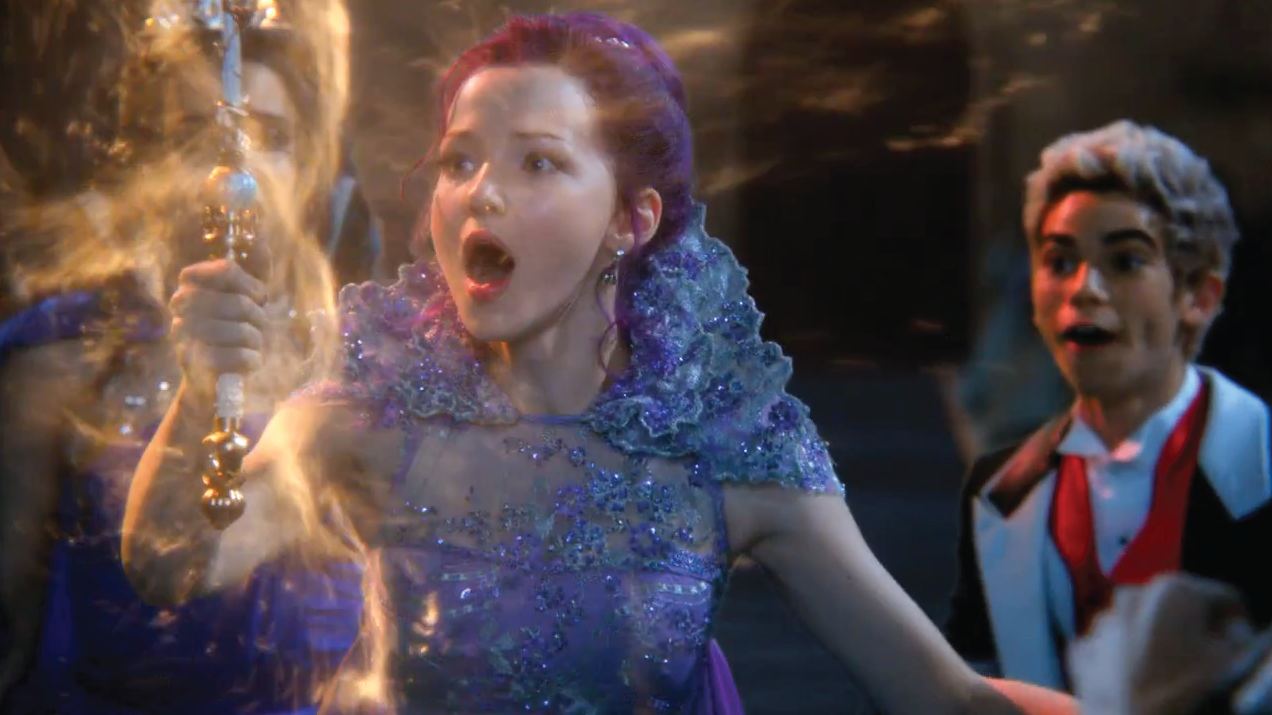 Mal becomes popular, using Maleficent’s spellbook to improve the looks of the Fairy Godmother and Mulan’s daughters Jane and Lonnie. Learning that Ben’s girlfriend will be seated close to the magic wand during the coronation, Mal creates a cookie laced with a love potion and gives it to Ben, who falls madly in love with her, much to the shock of his friends. On a date with Ben, Mal becomes conflicted with her inherit goodness and desire to please her mother, unsure how to react to Ben’s feelings towards her. During the school’s family day, the villains’ children are ostracized after an encounter with Audrey’s grandmother Queen Leah, though Ben and Doug remain friendly towards them.  On the day of the coronation, Mal gives Ben a brownie containing the love spell’s antidote, believing it was cruel to trick him, but he reveals he was already freed of the potion when he went swimming in the “enchanted lake” during their date. During Ben’s crowning, Jane grabs the wand from her mother, accidentally destroying the Isle’s barrier. Mal takes the wand from Jane, but torn over what to do, is encouraged by Ben to make her own choice rather than follow Maleficent’s path. Mal recognises that she and her friends found happiness in Auradon, and they decide to be good. Maleficent crashes the ceremony, freezing everyone in time save herself and the children. When they defy her, Maleficent transforms into a dragon. The four children use a counterspell, turning Maleficent into a tiny lizard, based on the amount of love in her heart. Mal returns the Fairy Godmother her wand and she unfreezes everyone. While the villains watch the celebration from afar, Auradon Prep’s students party into the night, Mal and her friends finding happiness.

Excellent film for all family. If you know your fairy tales you’ll love this.