In the not-too-distant-future, Britain is embroiled in a cold war with China. Scientist Vincent McCarthy (Toby Stephens) is in charge of giving cybernetic implants to brain-damaged soldiers; while they seem to become mute soon after, they regain all their physical and mental faculties. He hopes that he can use this technology on his daughter, who suffers from a debilitating neurological disorder. Then he meets Ava (Caity Lotz), a brilliant young scientist who has created an A.I. which is almost human. With her help, Vincent begins work on a sentient android by scanning her brain into a quantum computer… and after she’s unexpectedly murdered, Vincent uses her likeness and brain scan for The Machine (also played by Caity Lotz), a gynoid who is almost indistinguishable from a human.

In fact, she’s a little TOO human — she feels emotions like fear, love and remorse, and has a sense of morality that Vincent encourages. She also is capable of communicating with the cyborgs. Since the sleazy government/corporate boss Thomson (Denis Lawson) wants a mindless killing machine, he’s not too pleased by this. So he demands that Vincent lobotomize away Machine’s humanity.

The plot of “The Machine” is one we’ve seen before — someone builds a robot who turns out to be more human than expected — but Caradog W. James does an excellent job without being too preachy. It certainly helps that he includes some very realistic aspects to the story, such as conflicts with China and medical advances that are actually plausible (such as prosthetic limbs connected to the nervous system). And James uses that bedrock to build a very simple yet emotionally complicated story, which slinks along in moody, tense scenes that click together by the end. The movie is rather slow at times, focusing mostly on Vincent discovering how human Machine is while Thomson tries to corrupt her. After so many quiet scenes, the gruesome and chaotic climax comes as a bit of a shock.

The movie was made for less than a million pounds, and at times it shows — almost the entire story takes place in a military base, with some generic hallways and a big leaky airline hangar. However, the special effects are beautifully done, and James cloaks the bleak sets in shadows and bright lights, puddles of glimmering water and red, foggy alert lights. This is also a movie that heavily relies on its actors, and both Stephens and Lotz are absolutely sublime here. Stephens plays Vincent as a prickly, worn-out man whose only enthusiasm seems to be for saving his daughter, until he encounters the pure humanity of Machine. Lotz is also quite excellent — she plays Machine with a wide-eyed, childlike wonder at the world, which she maintains even after coming face-to-face with its horrors.

There’s also a good supporting role for Pooneh Hajimohammadi, who gives an effectively silent performance as the leader of the cyborgs. And Lawson also deserves some praise for being a very plausibly despicable villain — like the real-life military, he doesn’t care about wounded veterans or innocent people. He just wants obedient super-soldiers and new ways to kill. It’s all too realistic. While the concept is not new, “The Machine” is a slow, powerful little sci-fi movie that sets itself in a chillingly plausible future world. If nothing else, watch it for Stephens and Lotz’s excellent performances.

Three years after the destruction of the Death Star, the Rebel Alliance has been driven from their former base on Yavin IV by the Galactic Empire. The Rebels, led by Princess Leia, set up their new base on the ice planet Hoth. The Imperial fleet, led by Darth Vader, continues to hunt for the Rebels’ new base by dispatching probe droids across the galaxy.

While investigating a potential meteor strike, Luke Skywalker is captured by a wampa. He manages to escape from its cave with his lightsaber, but soon succumbs to the brutally cold temperatures. The ghost of his late mentor, Obi-Wan Kenobi, instructs him to go to the Dagobah system to train under Jedi Master Yoda. He is found by Han Solo, who uses the warmth of his dead tauntaun to keep Luke warm while he sets up a shelter. Han and Luke make it through the night and are rescued by Zev Senesca.

On patrol, Han and Chewbacca discover the asteroid Luke had planned to investigate is actually a probe droid, which alerts the Empire to the Rebels’ location. The Empire launches a large-scale attack, using AT-AT Walkers to capture the base. Han and Leia escape on the Millennium Falcon with C-3PO and Chewbacca, but their hyperdrive malfunctions. They hide in an asteroid field, where Han and Leia grow closer. Vader summons bounty hunters, including the notorious Boba Fett, to assist in finding the Falcon. Luke, meanwhile, escapes with R2-D2 in his X-wing fighter and crash-lands on the swamp planet Dagobah. He meets a diminutive creature who is revealed to be Yoda; after conferring with Obi-Wan’s spirit, Yoda reluctantly accepts Luke as his pupil. 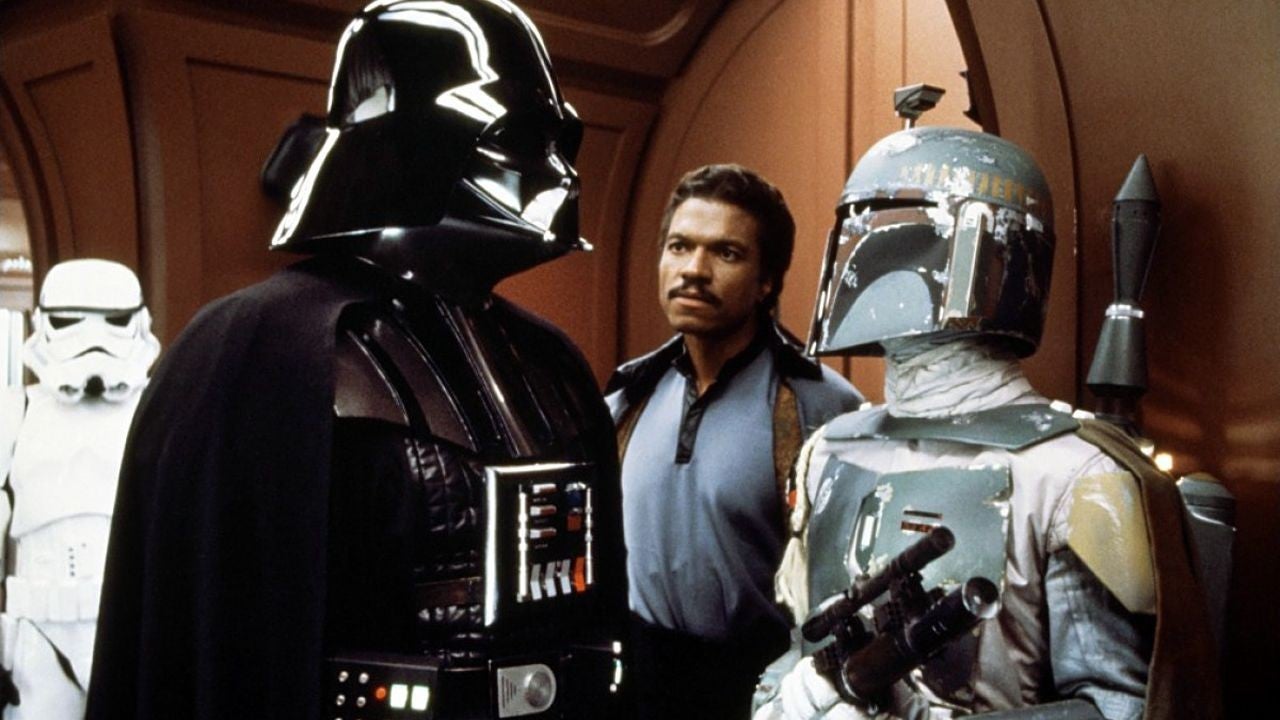 After evading the Empire, Han sets a course for Cloud City, a floating colony in the skies of the planet Bespin. Cloud City is run by Han’s old friend, Lando Calrissian. Unknowingly, the Millennium Falcon has been tracked by Boba Fett; shortly after they arrive, Lando leads the group into a trap and they are handed over to Darth Vader. Vader plans to use the group as bait to lure out Luke, intending to capture him alive and take him to the Emperor. During his training on Dagobah, Luke sees a premonition of Han and Leia in pain and, against Yoda’s wishes, leaves to save them.

Vader goes back on his agreement with Lando and takes Leia and Chewbacca into custody. He intends to hold Luke in suspended animation via carbon freezing, and, as a test, freezes Han in a block of carbonite. He hands the frozen Han over to Fett, who intends to leave for Tatooine to deliver Han to Jabba the Hutt and claim the bounty on Solo’s head. Lando, who was forced into cooperating with the Empire, initiates an escape and frees Leia and the others. They try to save Han but are unable to stop Fett. They then flee Cloud City in the Falcon.

Luke arrives at Cloud City and falls into Vader’s trap. The two engage in a lightsaber duel that leads them over the city’s central air shaft where, as his mentors warned, Luke proves to be no match for Vader who severs Luke’s right hand, causing him to lose his weapon. After Luke refuses to join Vader against the Emperor, Vader reveals that he is Luke’s father. Horrified, Luke falls through the air shaft. He is ejected beneath the floating city and makes a desperate telepathic plea to Leia, who senses it and persuades Lando to return for him in the Falcon. R2-D2 repairs the Falcon’s hyperdrive, allowing them to escape the Empire. Later, aboard a Rebel medical frigate, Luke’s amputated hand is replaced with a robotic prosthetic. Lando and Chewbacca set off for Tatooine in the Falcon in order to save Han. As the Falcon departs, Luke, Leia, R2-D2, and C-3PO look on and await word from Lando.

Tho more famed for its dark undertones, Empire is for sure still a very fun movie, C3PO goes into camp overdrive and Han Solo ups his quip quota by some margin. Then of course there is Yoda, in himself a comedic joy. The action sequences beg for repeat viewings, a battle on the ice laden planet Hoth is a marvel and the choreography for Skywalker’s fight with Darth Vader is out of the top draw. But ultimately it’s with the dark side that the picture excels. Complex and amazingly posing moral quandary’s, The Empire Strikes Back is quite an experience, one that will forever hold up to repeat viewings for this particular viewer.

The galaxy is in a civil war. Spies for the Rebel Alliance have stolen plans to the Galactic Empire’s Death Star, a heavily armed space station capable of destroying planets. Rebel leader Princess Leia has the plans, but her ship is captured by Imperial forces under the command of the evil Sith lord Darth Vader. Before she is captured, Leia hides the plans in the memory of an astromech droid, R2-D2, along with a holographic recording. The droid flees to the surface of the desert planet Tatooine with fellow droid C-3PO.

The droids are captured by Jawa traders, who sell them to moisture farmers Owen and Beru Lars and their nephew, Luke Skywalker. While cleaning R2-D2, Luke accidentally triggers part of Leia’s message, in which she requests help from Obi-Wan Kenobi. The next morning, Luke finds R2-D2 searching for Obi-Wan, and meets Ben Kenobi, an old hermit who lives in the hills and reveals himself to be Obi-Wan. Obi-Wan tells Luke of his days as a Jedi Knight, former Galactic Republic peacekeepers with supernatural powers derived from an energy called The Force but were wiped out by the Empire. Contrary to his uncle’s statements, Luke learns that his father fought alongside Obi-Wan as a Jedi Knight. Obi-Wan tells Luke that Vader was his former pupil who turned to the dark side of the Force and killed Luke’s father, Anakin. Obi-Wan offers Luke his father’s lightsaber, a Jedi weapon.

Obi-Wan views Leia’s complete message, in which she begs him to take the Death Star plans to her home planet of Alderaan and give them to her father for analysis. Obi-Wan invites Luke to accompany him to Alderaan and learn the ways of the Force. Luke declines, but changes his mind after discovering that Imperial stormtroopers searching for C-3PO and R2-D2 have destroyed his home and killed his aunt and uncle. Obi-Wan and Luke hire smuggler Han Solo and his Wookiee first mate Chewbacca to transport them to Alderaan on Han’s ship, the Millennium Falcon. 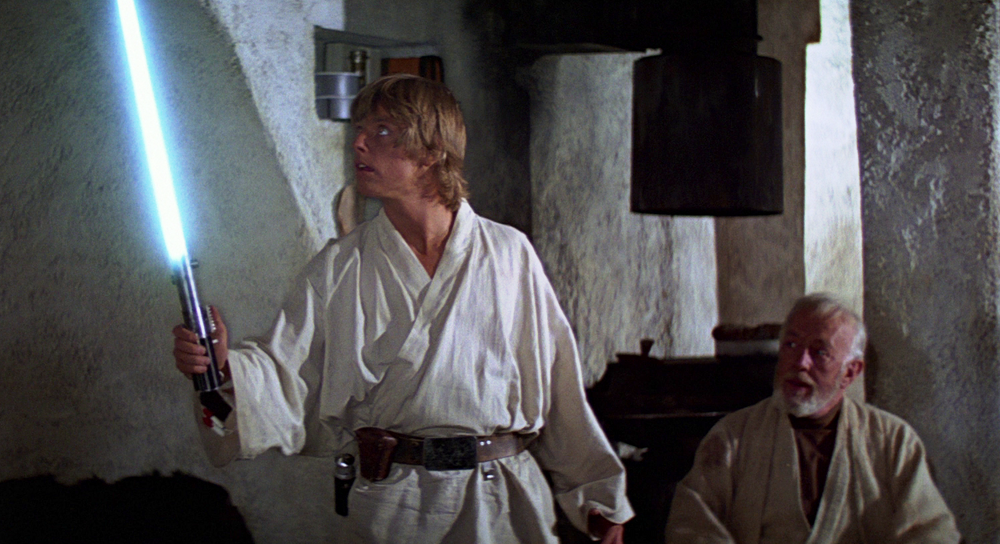 Upon the Falcon’s arrival at the location of Alderaan, the group discover that the planet has been destroyed by order of the Death Star’s commanding officer, Grand Moff Tarkin, as a show of power. The Falcon is captured by the Death Star’s tractor beam and brought into its hangar bay. While Obi-Wan goes to disable the tractor beam, Luke discovers that Leia is imprisoned aboard and, with the help of Han and Chewbacca, rescues her. After several escapes, the group makes its way back to the Falcon. Obi-Wan disables the tractor beam and, on the way back to the Falcon, engages in a lightsaber duel with Vader. Once he is sure the others can escape, Obi-Wan allows himself to be killed. The Falcon escapes the Death Star, unknowingly carrying a tracking beacon, which the Empire follows to the Rebels’ hidden base on Yavin IV. 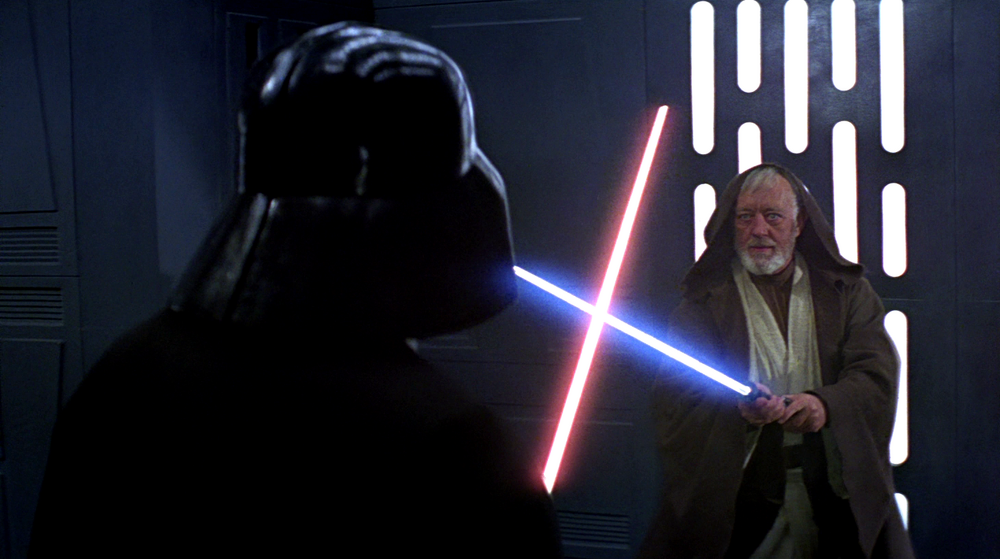 The Rebels analyze the Death Star’s plans and identify a vulnerable exhaust port that connects to the station’s main reactor. Luke joins the Rebel assault squadron, while Han collects his payment for the transport and intends to leave, despite Luke’s request that he stay and help. In the ensuing battle, the Rebels suffer heavy losses after several unsuccessful attack runs, leaving Luke one of the few surviving pilots. Vader leads a squad of TIE fighters and prepares to attack Luke’s X-wing fighter, but Han returns and fires on the Imperials, sending Vader spiraling away. Helped by guidance from Obi-Wan’s spirit, Luke uses the Force and successfully destroys the Death Star seconds before it can fire on the Rebel base. Leia awards Luke and Han with medals for their heroism.

Here begins the greatest cinematic epic of all time, and arguably one of the greatest stories ever told. Originally conceived as a serialized popcorn movie in the manner of the old action movies that Lucas grew up with, Star Wars surpassed even George’s keen and bombastic imagination to become a central part of movie history.