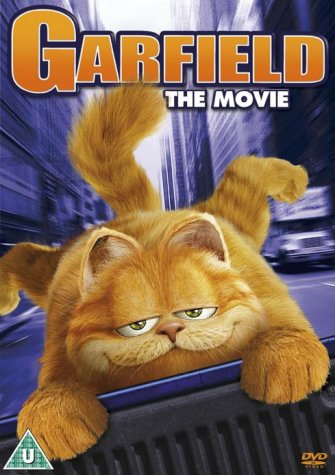 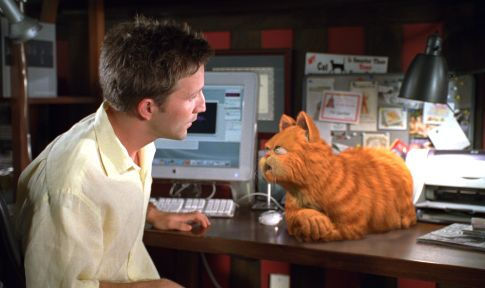 Garfield (voiced by Bill Murray) is a happy, fat, and lazy orange cat who lives with his owner and friend, Jon Arbuckle (Breckin Meyer) in a cul-de-sac in Muncie, Indiana. Garfield passes his time by annoying Jon and mocking a neighbor Doberman Pinscher, Luca. Aside from Jon, Garfield maintains an unlikely friendship with a remarkable mouse, Louis. He also interacts with and occasionally hangs out with his fellow neighborhood cats, including Garfield’s rival Nermal and Garfield’s love interest, Arlene (who are both seen as live-action cats). 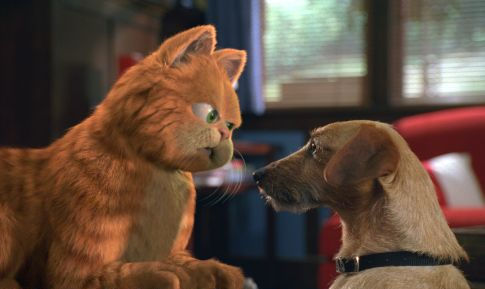 Meanwhile, a local television host, Happy Chapman, known for his cat “Persnikitty” is introduced as supposedly a happy man. In reality he is allergic to cats, jealous of his bad-tempered brother Walter J. Chapman, a news reporter, and wants to outwit him in success wise by performing on TV show Good Day New York. Jon has made a habit of bringing Garfield to the veterinarian, hoping to woo vet Dr. Liz Wilson. Jon tries to ask her out, but due to a misunderstanding, he is given custody of a stray dog, Odie. Regardless, Jon and Liz begin dating. Garfield is displeased at having to share the house with a dog, of whom Jon grows fond. Odie is brought to a canine talent show, where Liz is a judge. Garfield gets involved in a ruckus there with other animals, which moves Odie to the center of the ring, where he begins dancing to “Hey Mama” by The Black Eyed Peas. 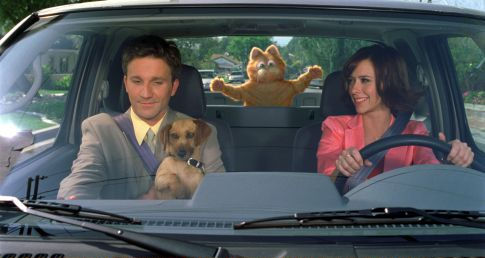 His impromptu performance is a hit. Happy Chapman, who also is a judge of the dog show is impressed with Odie, and offers Jon a television deal for Odie, but Jon declines leaving Happy to apparently be envious of Odie. After Garfield causes a mess inside Jon’s house in a fit of rage, Jon punishes Garfield by making him sleep outside for one night. Odie comes out to comfort Garfield but Garfield, as selfish as he is, reacts by running inside and locking Odie out. Odie runs away, and is picked up by an elderly woman named Mrs. Baker. A distraught Jon works with Liz to search for him, while the neighborhood animals shun Garfield for what he did to Odie. Meanwhile, Chapman and his assistant find a “lost dog” found poster Mrs. Baker created, of Odie and recognizing the lucrative possibilities, claim Odie as Happy’s own. 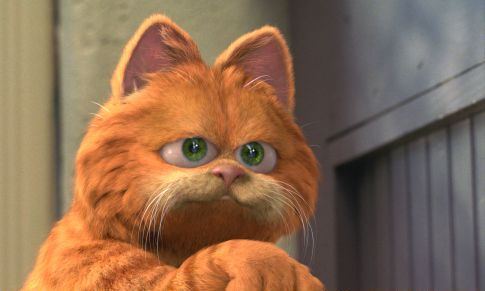 When Garfield sees Odie on television and hears Chapman announce he and Odie are going to New York City by train for a big performance on Good Day New York, Garfield, realizing his selfishness, vows to intervene. Garfield leaves his house on a rescue mission for Odie. Meanwhile, Jon finds out Garfield is missing and he and Liz set out find him. Garfield is able to finally make it to the tower with the help of his friend Louis but sneaks in the air vents which are being worked on. Seen as a blockage from one of the workers’ scanners of the vents, Garfield is blown by the vent air, hitting random walls and it finally ends when he smacks his face on the last wall. At Chapman’s studio at Telegraph Tower, Garfield finds Odie captive in a room; Chapman enters and secures a shock collar to Odie, which, when activated, releases an electric discharge that forces him to perform tricks.Chapman heads for the train station, with Garfield in pursuit. However, an animal control officer snags Garfield as a runaway before he can reach Odie. Meanwhile, Jon contacts Mrs. Baker through her poster, and is told Odie’s real owner had already retrieved him. After learning it was Chapman who took Odie, Jon believes Garfield was taken too and he and Liz race to Telegraph Tower and then to the train station, after learning Chapman has left. Garfield is sprung from the pound by Chapman’s abandoned feline star, the boastful Persnikitty who turns out to be actually named as Sir Roland. At the train station, while the P.A. saying that the Texas Eagle is going to Dallas and San Antonio, Texas, Chapman boards the train, with Odie in the luggage car.Garfield arrives only to see the train depart. As the train speeds away from the station, and seeing a child with a toy train engine (probably the Flying Scotsman in a different shape and size) makes Garfield remembers that his train set at home is similar, so he sneaks into the control room and attempts to stop Odie’s train. The tracks get rearranged, leading to an impending train wreck. Garfield hits an emergency control and causes Chapman’s train to return, and Garfield frees Odie and they exit the train. However, Chapman notices them walk out and gives chase. Chapman corners the two, and threatens Odie with the shock collar, but is greeted by Garfield’s friends and animals from the pound, led by Sir Roland. They swarm and attack Chapman, allowing for Odie to escape.Chapman gets up to find the shock collar has been placed on his own neck, from which he receives two powerful jolts. Jon and Liz arrive to reclaim the animals and find Chapman off-balance. Jon punches Chapman for stealing his pets (although Odie was the only who was taken), and leaves with Liz and the two animals. Chapman is arrested for his supposed involvement with the trains, as well as for abducting Odie and Wendell gives chase to the cops. Garfield regains the trust of his animal friends. Back at home, Liz kisses Jon, while Garfield seems to have learned about friendship, love and not to envy others. He then shoves Odie off his chair repeatedly, and the film closes with Garfield singing and dancing to James Brown’s “I Got You (I Feel Good)”. He does a split and can’t get it back up without help. As the credits roll over still pictures from the film (in black and white), Garfield is heard in the background asking Odie for ice.Garfield is still hilariously funny and you’d have to be incredibly sour not to laugh. The special effects are brilliant – not just the CGI Garfield, but the whole facial animation with the other animal characters. The way that Garfield portrays moral developement is also good and I recommend this as a truly delightful family movie.

Reuben Feffer (Ben Stiller), an insurance actuary, is celebrating his honeymoon with newlywed wife, Lisa Kramer (Debra Messing), on the island of St. Barts, but catches her having sex with Claude (Hank Azaria), a French scuba instructor. Returning home to New York alone, he attempts to piece his life back together. Reuben goes to an art gallery with his friend, Sandy Lyle (Philip Seymour Hoffman), where he runs into former junior high school classmate Polly Prince (Jennifer Aniston).

Reuben and Polly begin dating, with her introducing him to activities he once wrote off as “too risky”, such as eating at a Moroccan restaurant and salsa dancing, which culminates with the pair enthusiastically sleeping together, with Reuben shouting “50” as he orgasms. The contrast between their two personalities is a source of comedy throughout the film until Lisa returns and tells him she wants to reconcile their relationship. Meanwhile, Sandy, a self-centered, former teen idol, is trying to make a comeback by having a documentary filmed about his starring role as Judas in an amateur production of Jesus Christ Superstar. Reuben is torn between the free-spirited Polly and the safe and familiar Lisa. To solve this issue, he enters information about Polly and Lisa into a computer insurance program which measures risk. The computer tells him that, despite his numerous blunders with her, Polly is the best choice for him. Polly joins Reuben on a sailing trip he is going on, to inspect Leland Van Lew (Bryan Brown), a high-risk client, but gets offended when she sees his risk analysis of herself and rejects his proposal to move in together, telling him that he would be better off going back to Lisa.

Back home, Reuben tries talking to Polly, but to no avail. He eventually invites Lisa to Sandy’s opening show, where he learns that Polly is leaving New York for Cincinnati in a few hours. After a speech given by his father, Irving (Bob Dishy), to Sandy about not living in the past, Reuben realizes he wants to be with Polly and not Lisa, and he rushes to her apartment to stop her from leaving. Polly is not convinced she should stay with him, so Reuben eats food off the ground to prove he is capable of taking risks.  Reuben and Polly go on holiday to the same beach where Lisa and he had their honeymoon. Reuben again encounters Claude, but instead of being angry, he thanks Claude, and then heads into the water with Polly to join Van Lew on his new boat.

Along Came Polly was an entertaining film, but just wasn’t an amazing one. Ben Stiller has made some good films in the past. However I thought that the plot was a little weak. I think Ben Stiller’s character should have played out to a larger extent, the fact that he analysed every situation no matter how trivial. I really did not see much point in the ferret! And the romance which was the main feature of the film did not really bowl you over either. The film itself was actually very short aswell. Overall it is a film worth seeing but not one you will particulary want to see again or one you will particularly remember