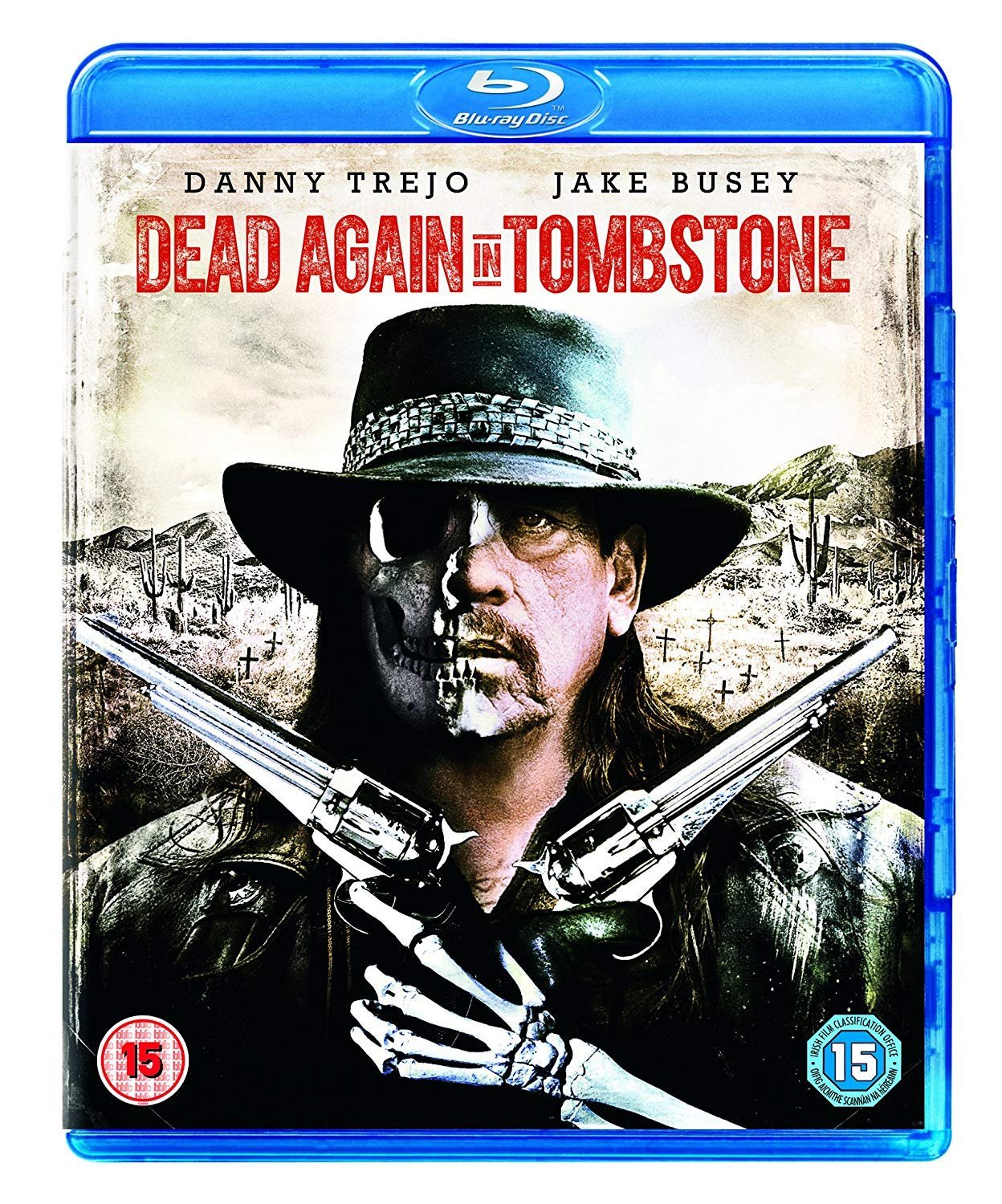 Dead Again In Tombstone revolves around Guerrero (Danny Trejo), a good old-fashioned western outlaw who has sold his soul to the devil and is in Satan’s service forever. After finally returning home to visit his estranged family Guerrero is confronted by Colonel Jackson Boomer (Jake Busey), a disgraced Confederate general and his crew who have escaped persecution from the Union after the conclusion of the Civil War. Colonel Boomer demands that Guerrero hand over a relic that his brother once spoke of, an item that will grant Boomer power, vitality, and will probably, also, bring on the end of the world.

There are also several aspects of the film that deserve mentioning such as the use of practical effects (as opposed to CGI) and the highly choreographed shootout scenes that happen throughout the film. Of course, since Dead Again in Tombstone is a western there has to be at least one shootout, but a major battle in the middle of the film took me completely off guard as I was not expecting a drawn-out camera shot of choreographed movements and actors with blood packs falling from decks and off railings after being shot. Not only did it make the scene smooth and pleasant, but I was actually able to relish it instead of pointing out ridiculous CGI blood or the unrealistic flashbang from the end of small caliber guns. The effect that was placed into this particular scene as well as other fighting scenes that included similar aspects was commendable and added enjoyment to the film. Along the same vein as the SFX and choreographed scenes was the camera work which was, quite simply, breathtaking. There were consistently lovely shots of the wilderness landscape around the town where everything took place and even some exaggerated shots of characters to convey nonverbal clues were well-executed and enjoyable.

There is one shot of Colonel Boomer entering a saloon where he is not welcomed and the camera is at a slightly lower angle, to showcase Boomer’s silhouette as it overtakes the doorway,  that feels oppressive to the viewer. The shot is then slowed down and paired with more camera angles and lighting tricks to capture the sense of dread that is emanating from the other patrons of the saloon at the sight of a disgraced Confederate colonel. However, no amount of camerawork, choreo, and Danny Trejo can erase some of the lackluster performances given throughout the film. While Trejo is delivering lines like “I don’t need Satan’s power to shove this horn up your ass” the villain, Jake Busey, calls out to invoke the dead in a tone that is more appropriate for ordering a latte from Starbucks. Throughout Dead Again in Tombstone Busey is as inconsistent with his tone as he is with his southern accent and sometimes the only reason I knew he was angry or serious was from the menacing snarl he used.

Busey is not the only one that consistently under-delivers their lines, there is also blame to be placed at the feet of Guerrero’s estranged family who seem to have a knack for being either insanely passionate or, again, delivering lines like they are ordering pizza. But the worst offender of all is Madame Du Vere (Elizabeth Lavender) the madam of the local brothel who luckily does not play a major role in the proceedings until the final act of the movie. The Madam is anything but what a madam should be; she isn’t sultry, seductive, powerful, or commands respect, but instead she masquerades as an adorable fresh-faced lady who pretends to be evil with ridiculous lines. After looking at Lavender’s resume, I will lay most of the blame at the poor casting choice and the terrible dialogue that she was fed. Although I understood that she was the madam, none of the dialogue, movements, or scenes gave her the proper air, thus not giving her stable ground to convey the character. In any case, the madam is borderline unbearable.

Yet, if you can forgive the cheesier components of Dead Again In Tombstone, some flaws in acting, and are okay with a plot that you have seen 1000 times before, then Dead Again In Tombstone is for you. It’s catering more for the casual horror watcher who likes the elements rather than the whole package or is a good family (teenagers not children) friendly movie that can be enjoyed for its cheesiness and action-packed plot. 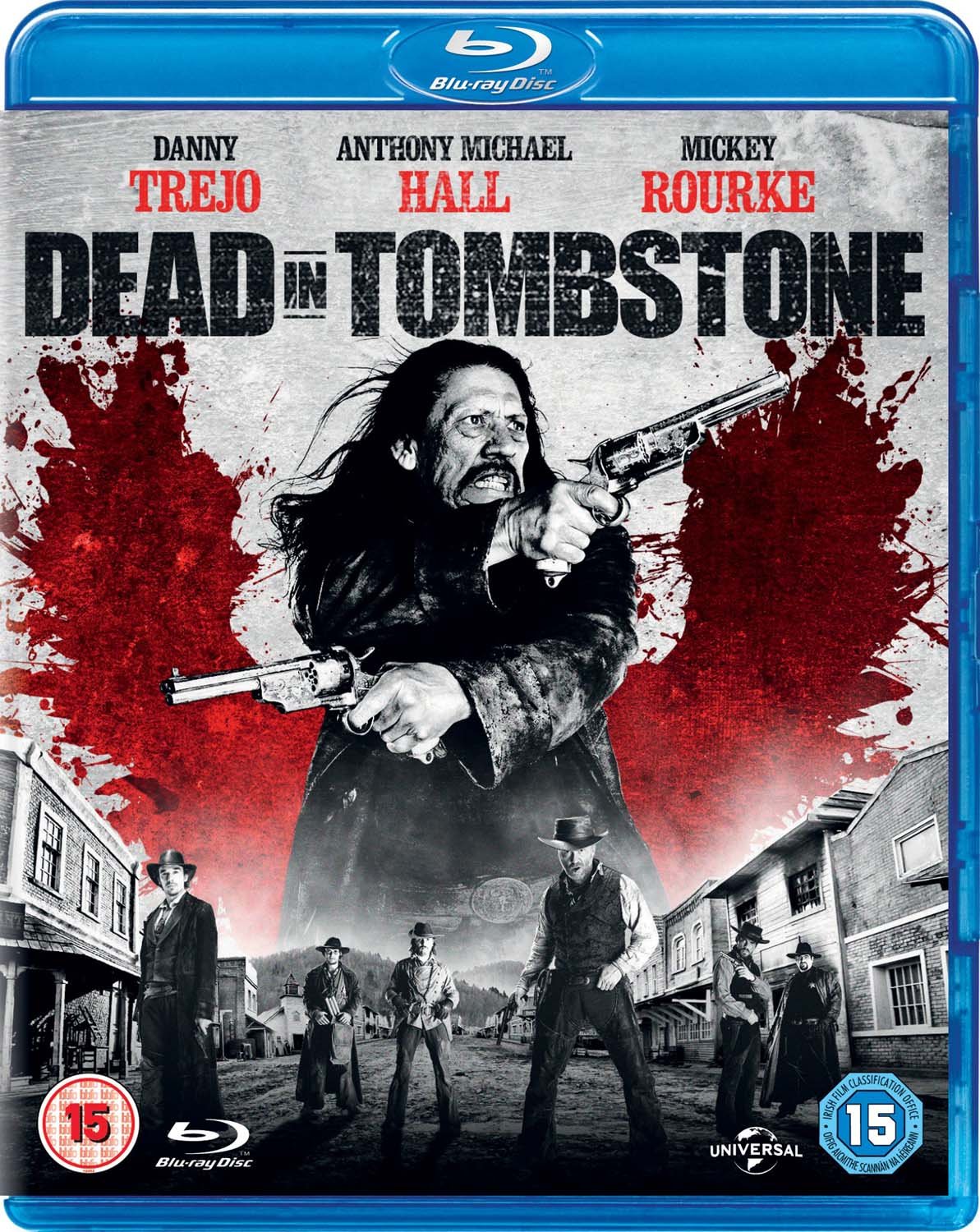 In the Frontier of the Wild West, Red Cavanaugh is to be hanged for his crimes. Calm, he says that every man at the gallows will be dead before sunrise. Moments later, the Blackwater Gang – Baptiste, Darko, Ramos, Snake, and Washington – arrive led by his half-brother Guerrero De La Cruz. After slaughtering everyone and freeing Red, they retreat. The next morning, Red tells them about Edendale, Colorado, where gold ore is being stored in a bank until a mineral dispute can be settled. Guerrero agrees to steal it, so long as they avoid unnecessary deaths. After the seven rob the bank, Red betrays Guerrero, as he had acquired the deed to the mine and desires to take over the town. He shoots Guerrero, and despite Guerrero’s orders, Red convinces the rest of the gang to turn on him; they all shoot Guerrero to death.Finding himself in Hell, Guerrero meets Lucifer, whom he had seen recently in his dreams. Guerrero bargains with him, to allow him to return to Earth and to kill his former gang, so that the fires of Hell can grow hotter than he alone can stoke with his flesh. Intrigued by this, Lucifer grants Guerrero 24 hours to slay all six of his betrayers or his soul will remain damned to Hell; Satan tells him that only Guerrero can kill the six, dissuading him from asking for help. Guerrero wakens one year to the day of his death and makes his way back to town now called “Tombstone” in his memory.Ramos, shaken by an omen earlier, returns to his home and witnesses two of his farmhands killed before confronting Guerrero, whom he does not immediately recognize. After Guerrero puts together his guns, a feat only he and Red could accomplish, Ramos recognizes him, and he is shot to death. Taking his clothes, Guerrero has the local pastor set up six pine boxes as coffins and stations Ramos in one of them. The following morning, Baptiste and Darko discover Ramos and invade a nearby slaughterhouse. After a stand-off with Baptiste and his men, Guerrero kills Baptiste but realizes that he still bleeds like a mortal. Darko tells Red about the stranger killing them off, and he sends Washington to the mine to insure that the man protecting them from the law is paid off in full. The gang goes to the saloon where Guerrero is and a firefight ensues. After defeating them, Guerrero sees the former sheriff’s widow, Calathea, about to kill Red and stops her, but he is trampled by Red’s horse as he flees town. Waking sometime later, he explains to her and Father Paul about his situation. Showing him Darko’s dead body, whom he’d killed during the saloon brawl, Calathea agrees to help him, and the two make their way to the mine.

In the mine, it is revealed that Judah Clark, a Marshall, is aiding Red and protecting Red for access to the gold. They leave Washington and Snake to finish off Guerrero, but he turns the tables and kills Washington as he and Calathea escape back to town with his body. After an intense chase, they return to town. In a stand-off, Guerrero kills Snake with a gunshot to the eye, but he is quickly shot down and Calathea is captured. Lucifer, still intrigued by Guerrero’s tenacity returns him to life with one hour remaining on his deadline. After a mob tries to kill Red, he takes Calathea captive and confronts his brother, who convinces him to a fair duel. Lucifer cheats with seconds remaining on the clock, and Red and Guerrero instead battle by hand. Guerrero gains the upper hand and kills Red, but two minutes after his time is up.

Entering the church, Lucifer informs Guerrero of his failure, but does not want to condemn him to Hell. Instead, he forces Guerrero to kill outlaws to pay off his debt. Now, with Edendale out of danger, Guerrero rides off into the countryside, looking for his next bounty to collect for Hell.

I am not a huge fan of westerns, so imagine my surprise when I deeply enjoyed this movie. The last western that i enjoyed was Tombstone and don’t get me wrong, this movie is no Tombstone but the camera work makes this movie visually enjoyable. Anthony Michael Hall played Red extremely convincingly and Mickey Rourke take as Satan was genuinely likable. Camera tricks, editing and sound made this movie enjoyable even though the plot was predictable. I also like that is was a new twist on the old revenge for death plots Westerns show. If you like movies with slick visual effects, then you will enjoy this. If your looking for great dialog and deep character development then you may want to save this one for a day you just want to be entertained.