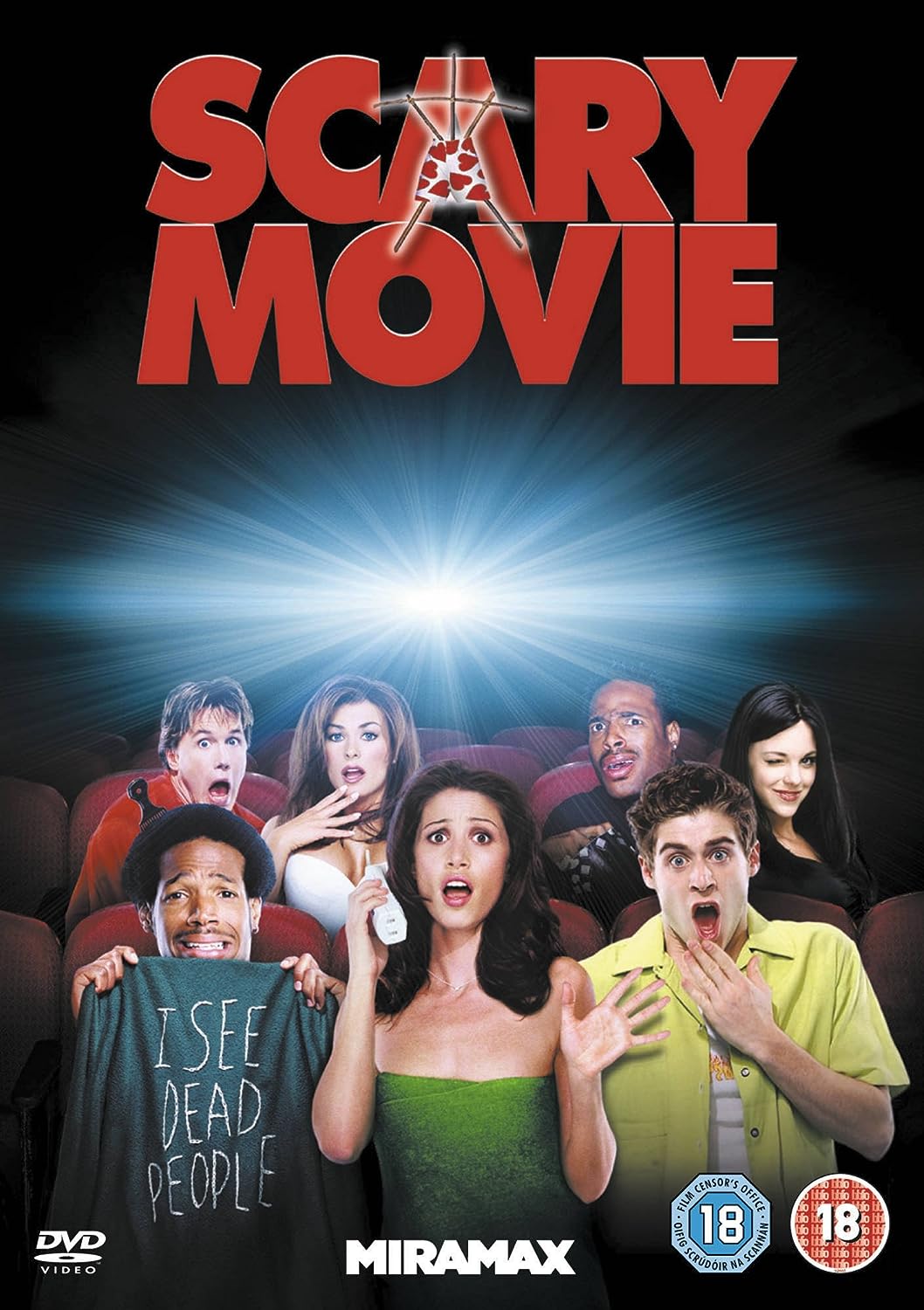 While Cindy is in class, she receives a note reading: “I KNOW WHAT YOU DID LAST HALLOWEEN!” She then realizes that Drew was murdered exactly one year after she and her friends accidentally killed a man (Lloyd Berry) during a wild car ride. Later that same day, Greg finds a photo of his genitals in his locker, with the caption, “I KNOW.” Later that night, Greg is killed by Ghostface in a deserted upper deck during Buffy’s beauty pageant, with the audience mistaking Buffy’s screams as being part of her act. When Buffy realizes she’s won the pageant, she momentarily forgets about Greg’s murder and celebrates her victory.

The next morning, Buffy, still high on the success of her win, ignores Cindy’s warnings about the killer and does not realize she is being killed as it happens, even after she is decapitated (and the killer tosses her head in a Lost and Found bin, though her head keeps talking). Ray and Brenda go to a showing of Shakespeare In Love, where Ray is stabbed in the ear through a bathroom stall. Ghostface then goes after Brenda. Unfortunately, angry movie patrons, fed up with Brenda’s rude behavior during the movie, attack her her before Ghostface can, severely injuring her. 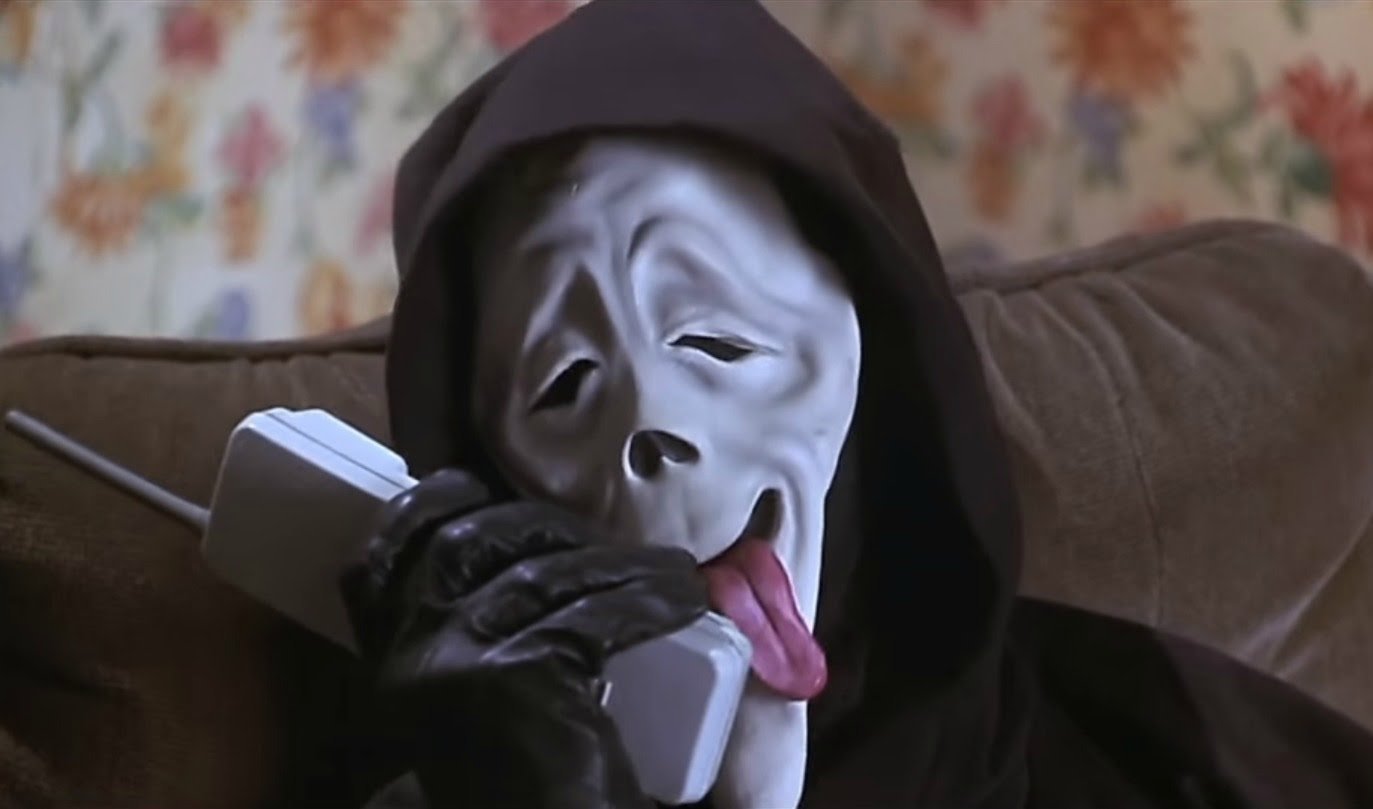 Meanwhile, Cindy throws a house party, hoping for safety in numbers. During the party, Bobby and Cindy go upstairs and have sex. Ghostface unexpectedly appears and stabs Bobby, before disappearing quickly. Cindy gets a gun from a drawer near the entrance, Bobby follows and she tends to his wounds. Brenda’s stoner brother Shorty (Marlon Wayans) comes up from the basement and informs them that the killer had chased many of the partygoers away after killing some. Bobby takes the gun and shoots Shorty, revealing that his wound was an elaborate ruse. Ray arrives on the scene, alive; he and Bobby announce their plan to Cindy to kill her and her father (Rick Ducommun) (despite the fact that they are not actually the killers).

Ray and Bobby also plan to make themselves look like heroes by giving each other stab wounds to indicate they fought back, but the plan backfires when Ray stabs Bobby repeatedly and ultimately kills him, furious because his favorite show, The Wayans Bros., has been cancelled. Ghostface abruptly arrives and attacks Cindy during a fight of karate after stabbing Ray to death, but she successfully subdues him by employing moves copied from The Matrix (and by doing a brief Irish jig while levitating) and kicks him through a window. Nonetheless, Ghostface vanishes before the police arrive. At the police station, Cindy and the local sheriff (Kurt Fuller) realize that Doofy, the only one who knew about the car accident, was actually faking his disability and is the true killer. Unfortunately, Doofy has already escaped with Gail Hailstorm. Upon finding his discarded disguise in the street, Cindy begins screaming, but is soon hit by a car. In a post-credits scene, Shorty appears and breaks the fourth wall by giving tips on how to survive this sort of “situation”. They appear to be on how to survive in a horror movie, but turn out to be tips on how to successfully enact a snatch n run.

Being a fan of the Scream movies, I was keen to see Scary Movie when it was first released. I’m glad I did because it’s a very funny film, hilarious at times. How the actors managed to keep straight faces whilst filming is beyond me….worth watching. 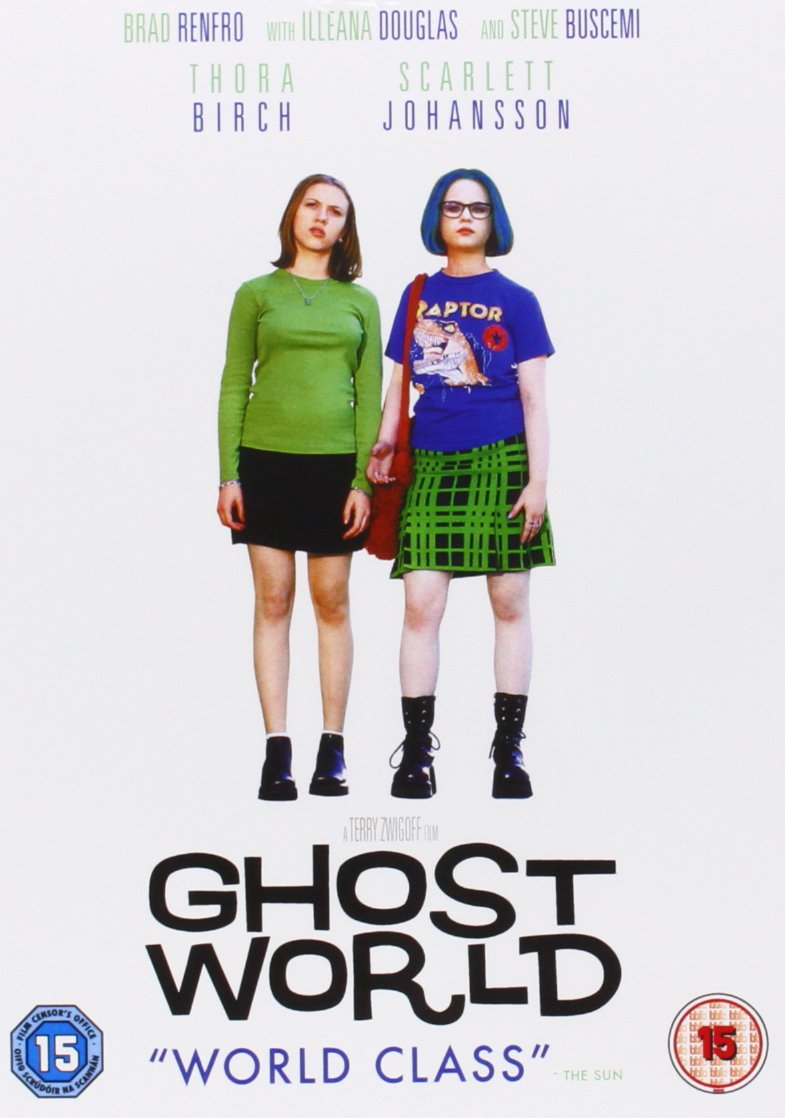 Best friends Enid and Rebecca face the summer after their high school graduation. The girls are social outcasts, but Rebecca is more popular with boys than Enid. Enid’s diploma is withheld on the condition that she attend a remedial art class. Even though she is a talented artist, her art teacher, Roberta (Illeana Douglas), believes that art must be socially meaningful and dismisses Enid’s sketches as nothing more than “light entertainment.”

The girls see a personal ad in which a lonely, middle-aged man named Seymour (Steve Buscemi) asks a woman he met recently to contact him. Enid makes a prank phone call to Seymour, pretending to be the woman and inviting him to meet her at a diner. The two girls and their friend, Josh (Brad Renfro), secretly watch Seymour at the diner and make fun of him. Enid soon begins to feel sympathy for Seymour, and a few days later the girls follow him to his apartment building. They find him selling vintage records in a garage sale. Enid buys an old blues album from him, and they become friends. She decides to try and find women for him to date.

Enid has meanwhile been attending her remedial art class, and she persuades Seymour to lend her an old poster depicting a grotesquely caricatured black man, which was once used as a promotional tool by Coon Chicken Inn, the fried chicken franchise now known as “Cook’s Chicken”, where Seymour works in a managerial position. Enid presents the poster in class as a social comment about racism, and Roberta is so impressed with the concept that she offers Enid a scholarship to an art college. Seymour receives a phone call from Dana (Stacey Travis), the intended recipient of his personal ad. Enid encourages him to pursue a relationship with Dana, but she becomes unexpectedly jealous when he does so. Enid and Rebecca’s lives start to diverge. While Enid has been spending time with Seymour, Rebecca has found a job at a coffee shop and has become more interested in clothing, boys and other typically traditional teenage obsessions. Enid also finds herself a job so she can afford to rent an apartment with Rebecca, but she is fired after only one day. The girls argue, and Rebecca abandons the idea of living with Enid. 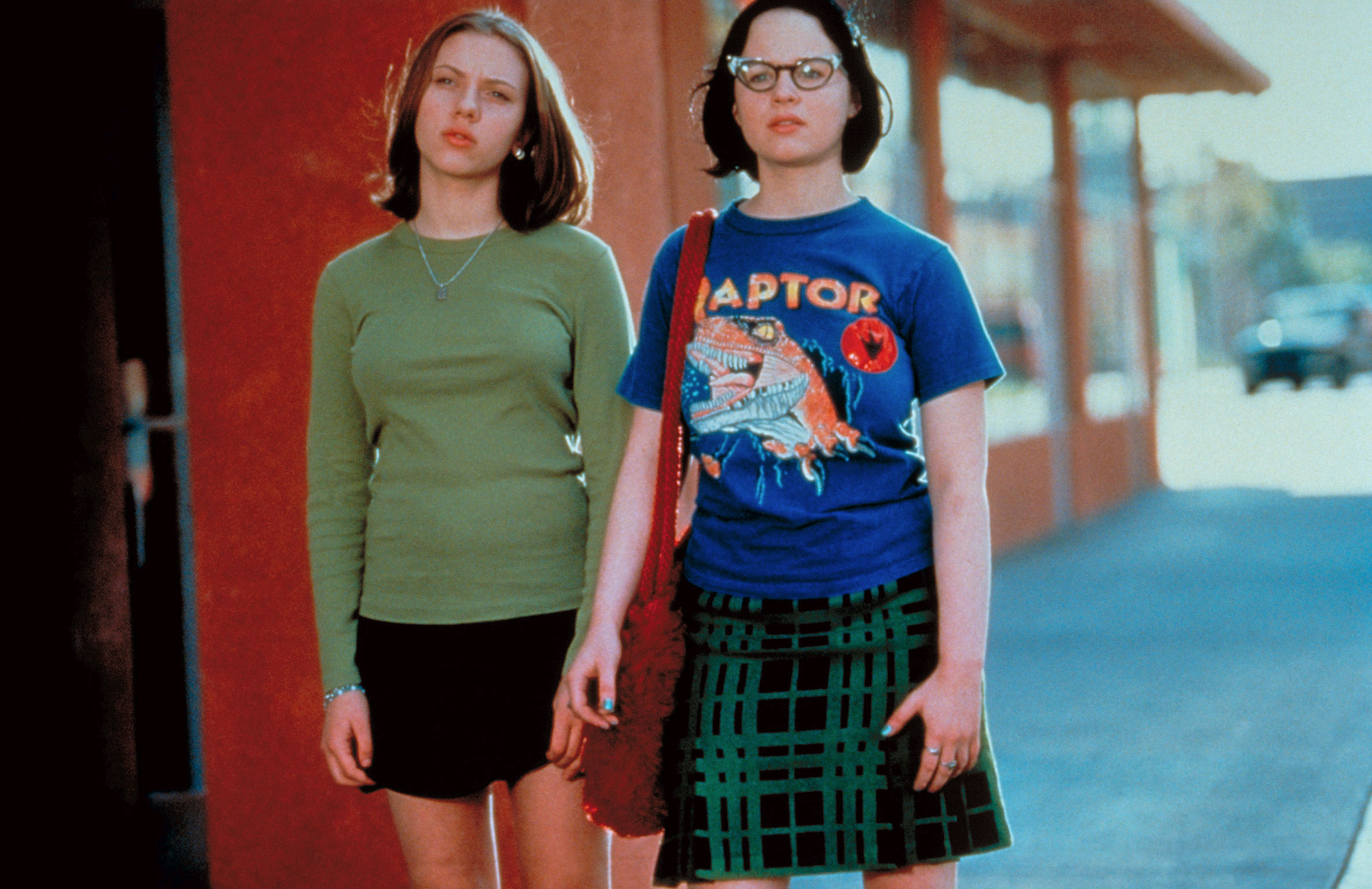 At the end of the summer, Enid and Seymour’s lives fall apart. When Enid’s poster is displayed in an art show, school officials find it so offensive they force Roberta to give her a failing grade and revoke the scholarship. Enid turns to Seymour for solace, resulting in a drunken one-night stand. Seymour breaks up with Dana, and is called to account at work when the Coon Chicken poster is publicized in a local newspaper. He unsuccessfully tries to contact Enid, only for Rebecca to tell him about Enid’s prank phone call, describing the way the trio mocked him at the diner. Seymour is understandably upset and ends up confronting Josh. Seymour is injured while doing so and is hospitalized. Enid visits Seymour in an effort to apologize, causing him to realize that he has no chance of any kind of future with her. 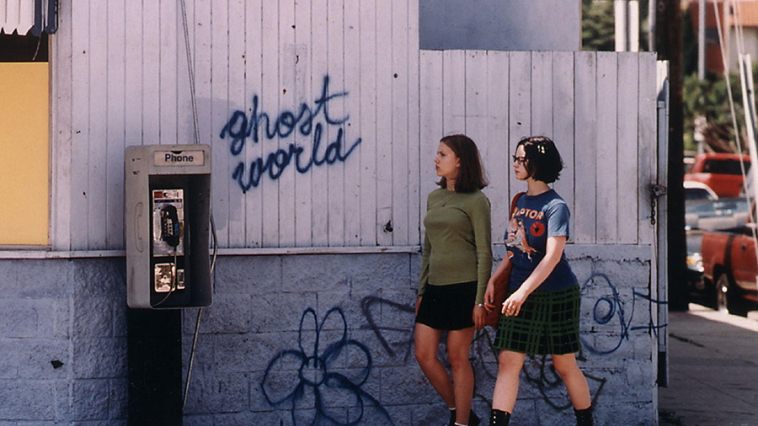 Enid gives in to her childhood fantasy of running away from home and disappearing. Throughout the film, she has seen an old man named Norman (Charles C. Stevenson Jr.), who waits at an out-of-service bus stop for a bus that will never come. Enid sits next to him, and Norman boards an out-of-service bus. The next day, while Seymour discusses the summer’s events with his therapist, Enid returns to the bus stop and boards the out-of-service bus when it arrives.

This is a really enjoyable film. Focusing its attentions upon the young person’s search for identity,the perpetuation/cessation of teen-angst malaise and the fear of conventionality, this is a proverbial hoot. A cracking, well-structured script infectiously and sympathetically portrays an early, formative rites-of-passage tale with infectious and engaging humor. 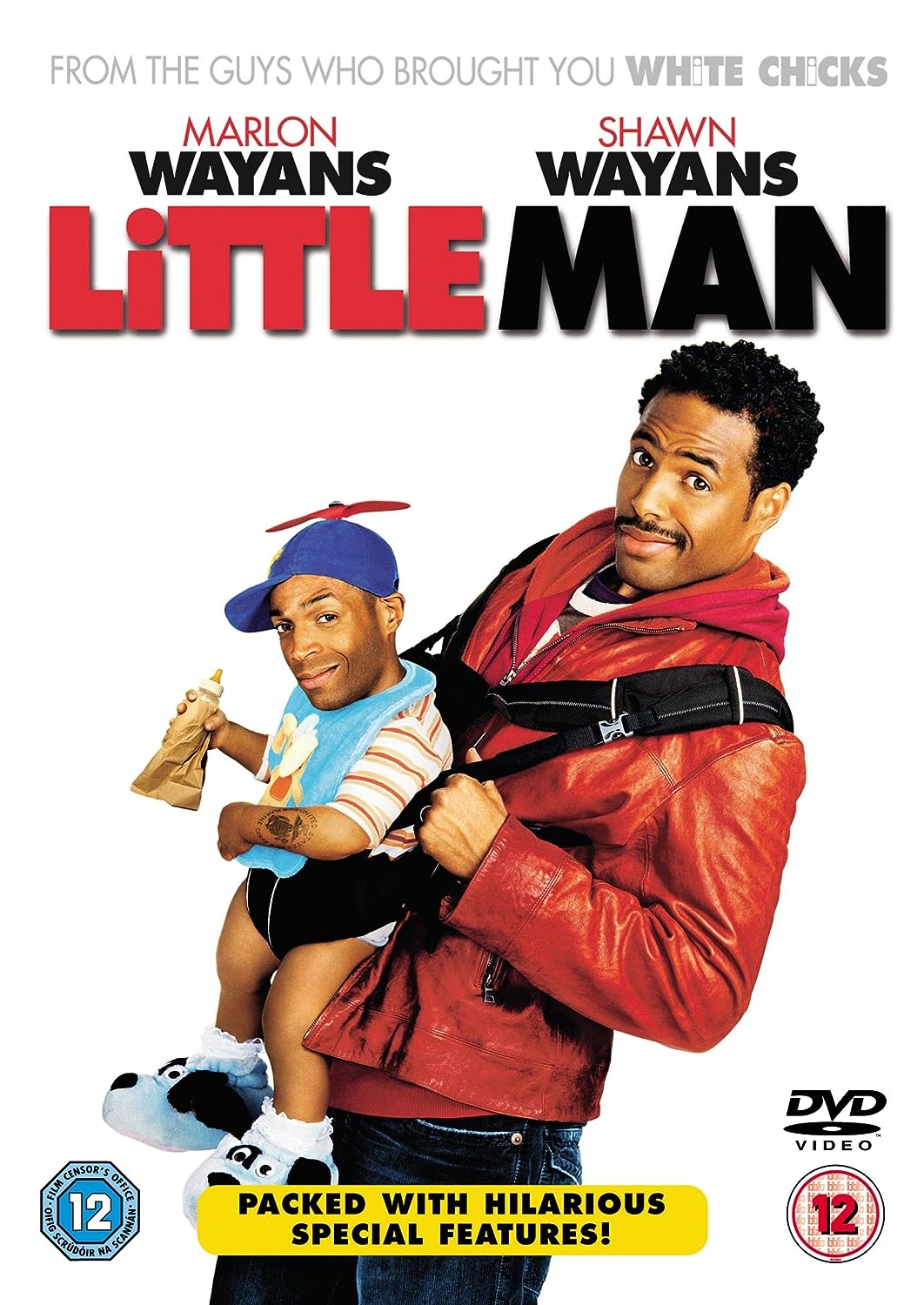 Calvin “Babyface” Simms (Marlon Wayans) is a very short convict. With the help of his goofball cohort Percy (Tracy Morgan), Calvin plots a jewellery shop robbery to steal one of the world’s largest diamonds. After the successful robbery, the duo are almost arrested, but not before Calvin manages to stash the diamond in a nearby woman’s purse. The thieves follow the handbag’s owner to her home where they discover a couple, Darryl (Shawn Wayans) and Vanessa Edwards (Kerry Washington), who are eager to have a child.

Calvin and Percy hatch a plot to pass Calvin off as a baby left on the couple’s doorstep. Darryl and Vanessa, wanting a child, immediately adopt the baby as their own. However, Vanessa’s dad Francis “Pops” (John Witherspoon) has a bad feeling about Calvin. Friends of the couple find Calvin odd as well. A local goon named Walken (Chazz Palminteri), discovers the deception and demands the diamond from Percy. Percy sells out Darryl and now Calvin, in a series of comedic maneuvers, manages to rescue Darryl and have Walken arrested. Darryl is given a substantial reward for the recovery of the diamond, and since Calvin saved his life, he doesn’t turn him over to the police.

Before he leaves, Calvin thanks Darryl for taking care of him even though he wasn’t really a baby and admits that he thinks Darryl would make a great father for a real child someday. Calvin is about to be out of Darryl’s life for good, as Darryl watches him leave. Calvin is crying hysterically, so Darryl decides to let Calvin stay and from that point on, the two men become the best of friends. The film ends at some point in the future with Calvin and Pops playing with Darryl and Vanessa’s real baby, who looks exactly like Darryl (Shawn Wayans’s face superimposed on that of the baby).

This movie is thoroughly enjoyable. The premise is understandable for all ages and it is just a great romp. Not to be taken seriously its just a funny film.