CAST
Daisy Ridley (Scrawl)
John Boyega (Attack The Block)
Oscar Isaac (Ex_Machina)
Mark Hamill (Batman: TAS)
Harrison Ford (Blade Runner)
Carrie Fisher (Sorority Row)
Adam Driver (Bluebird)
Andy Serkis (Lord of The Rings)
Domhnall Gleeson (The Revenant)
Anthony Daniels (The Lego Movie)
Max Von Sydow (Conan The Barbarian)
Peter Mayhew (Killer Ink)
Gwendoline Christie (Game of Thrones)
Simon Pegg (The World’s End)
Kiran Shah (The Hobbit)
Greg Grunberg (Heroes)
Maisie Richardson-Sellers (The originals)
Warwick Davis (The Ewok Adventures)
Mark Stanley (Kajaki)
Ken Leung (Lost)
Billie Lourd (Scream Queens)
Thomas Brodie-Sangster (The Maze Runner)
Bill Hader (Superbad)
Daniel Craig (Cowboys & Aliens)
Ewan McGregor (Mordecai)
Lupita Nyong’o (Black Panther)
Billie Lourd (Scream Queens)
Jessica Henwick (Iron FIst)
Hannah John-Kamen (Ant-Man and The Wasp)
Fred Tatasciore (Hulk Vs)
Approximately 30 years after the destruction of the second Death Star, the last remaining Jedi, Luke Skywalker, has disappeared. The First Order has risen from the fallen Galactic Empire and seeks to eliminate the New Republic. The Resistance, backed by the Republic and led by Luke’s twin sister, General Leia Organa, opposes them while searching for Luke to enlist his aid.
Resistance pilot Poe Dameron meets village elder Lor San Tekka on the planet Jakku to obtain a map to Luke’s location. Stormtroopers commanded by Kylo Ren destroy the village and capture Poe. Poe’s droid BB-8 escapes with the map, and encounters the scavenger Rey near a junkyard settlement. Ren tortures Poe using the Force, and learns of BB-8. Stormtrooper FN-2187, unable to bring himself to kill for the First Order, frees Poe, and they escape in a stolen TIE fighter; Poe dubs FN-2187 “Finn”. They crash on Jakku, and Finn survives but is unable to determine if Poe did as well. He encounters Rey and BB-8, but the First Order tracks them and launches an airstrike. Finn, Rey, and BB-8 flee the planet in the Millennium Falcon, which they steal from a junkyard.
The Falcon breaks down and is captured by a larger ship piloted by Han Solo and Chewbacca, looking to reclaim their former vessel. Two rival gangs, seeking to settle debts with Han, board and attack, but Han and company manage to escape in the Falcon. The gangs inform the First Order of the events. At the First Order’s Starkiller Base – a planet converted into a superweapon that harnesses energy from stars – Supreme Leader Snoke orders General Hux to use the weapon for the first time. Snoke questions Ren’s ability to deal with emotions relating to his father, Han Solo; Ren replies that Han means nothing to him.
The Falcon crew views BB-8’s map and determines it is incomplete. Han explains that Luke attempted to rebuild the Jedi Order but exiled himself when an apprentice turned to the dark side. The crew travels to the planet Takodana and meet with cantina owner Maz Kanata, who offers assistance in getting BB-8 to the Resistance. Rey is drawn to a vault on the lower level and finds the lightsaber that once belonged to Luke and his father Anakin Skywalker. She experiences disturbing visions and flees into the woods. Maz gives Finn the lightsaber for safekeeping.
Starkiller Base fires and destroys the Republic capital and fleet. The First Order attacks Takodana in search of BB-8. Han, Chewbacca, and Finn are saved by Resistance X-wing fighters led by Poe, revealing that he survived the earlier crash. Leia arrives at Takodana with C-3PO and reunites with Han and Chewbacca. Meanwhile, Ren captures Rey and takes her to Starkiller Base, but when he interrogates her about the map, she is able to resist his mind-reading attempts. Discovering she can use the Force, she escapes using a Jedi mind trick on a nearby guard.
At the Resistance base on D’Qar, BB-8 finds R2-D2, who has been inactive since Luke’s disappearance. As Starkiller Base prepares to fire on D’Qar, the Resistance devises a plan to destroy the superweapon by attacking a critical facility. Leia urges Han to return their son alive. Using the Falcon, Han, Chewbacca, and Finn infiltrate the facility and plant explosives. Han confronts Ren, calling him by his birth name, Ben, and implores him to abandon the dark side. Ren kills Han, enraging Chewbacca, who fires and wounds Ren. He sets off the explosives, allowing the Resistance to attack and destroy Starkiller Base. 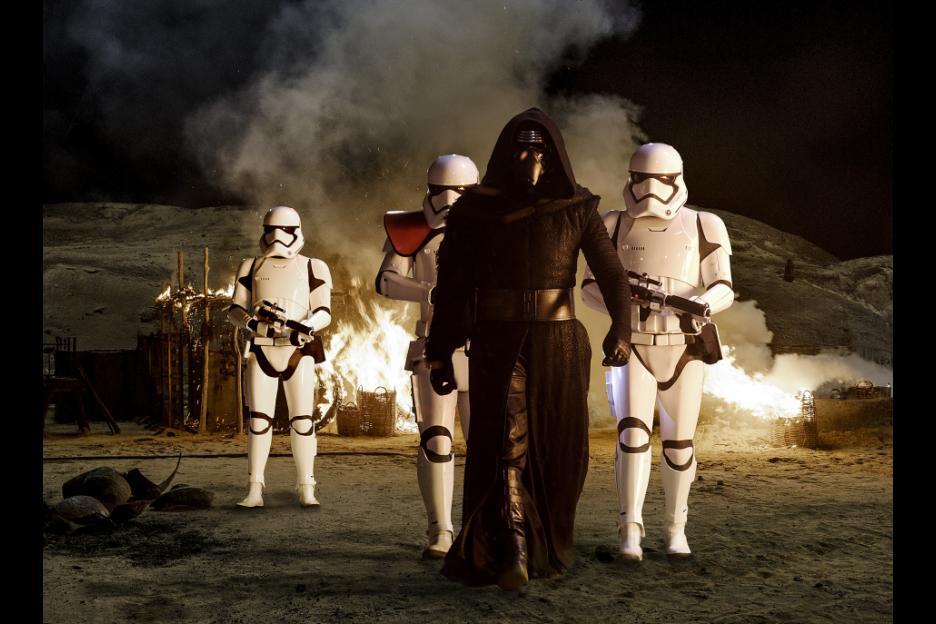 Ren pursues Finn and Rey to the surface. A lightsaber battle between Ren and Finn ensues, leaving Finn badly wounded. Rey takes the lightsaber and uses the Force to defeat Ren, before they are separated by a fissure as the planet begins to disintegrate. Snoke orders Hux to evacuate and bring Ren to him to complete his training. Rey and Chewbacca escape with Finn in the Falcon. On D’Qar, the Resistance celebrates while Leia, Chewbacca, and Rey mourn Han’s death. R2-D2 awakens and reveals the rest of the map, which Rey follows with R2-D2 and Chewbacca to a distant planet. She finds Luke and presents him with the lightsaber. 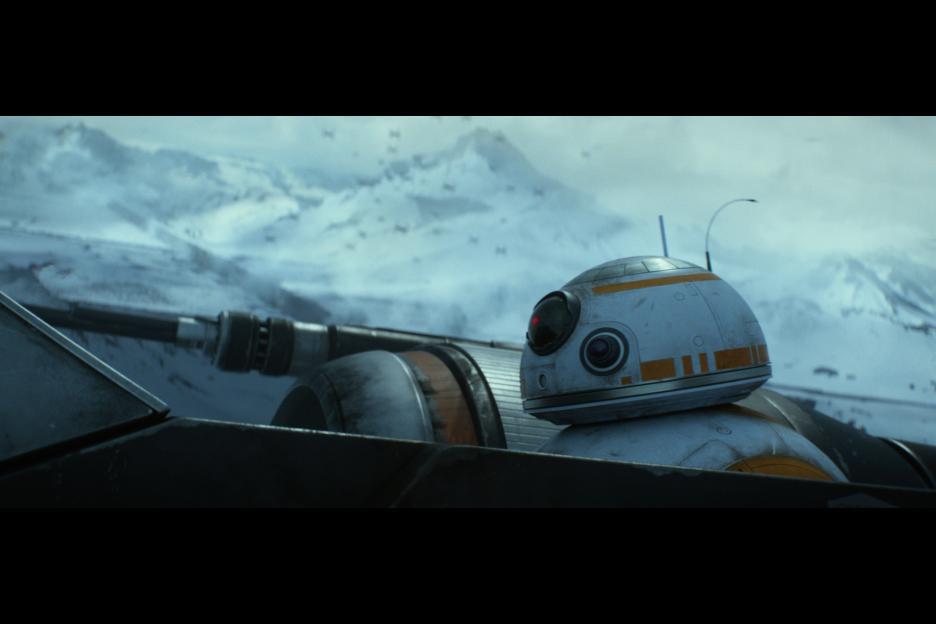 Packed with action and populated by both familiar faces and fresh blood, The Force Awakens successfully recalls the series’ former glory while injecting it with renewed energy.