Dinosaurs plus humans! After millions of years, the strongest and bravest team in history assembles to protect the Earth! Hear our roar! Series writer Riku Sanjo actually writes every episode, a rare feat in tokusatsu. Because of Sanjo’s full involvement, Kyoryuger manages to keep the episodes very coherent and consistent with the story. This includes even the filler type episodes, which, aside from having wacky and odd plots, contain elements integral to advancing the story, as well as developing the cast.

The main team and villains get plenty of characterization that, by the end, makes them all become standout character. Music is a recurring motif that I never thought would be a big factor in the show. Not only does the series have a huge collection of songs, the story and its characters are ultimately connected through melody. I never would’ve guessed that all the dancing and samba music actually meant something outside of the fabulously wacky presentation, but no, it’s that important. In the movie and sprinkled throughout some episodes, there are background information that pretty much confirms this.

The cast starts out small, but it’s actually ridiculously huge. With a total of 10 Kyoryugers in the end (or more depending on how you count them), and not to mention the allies and the villains. Our fearless Red, Daigo aka King, is what many have referred to as a Marty Sue/Gary Stu-type. He’s the macho, always-friendly, always-reliable, perfect kind of guy who’s following his dad’s path. Much of the show revolves around him, and because Daigo is usually just “perfect,” this can be annoying to a lot of others because he has nothing that makes him remarkable. Honestly, even if Daigo stole much of the frames, I do like him because of his positive, energetic outlook. There is a two-parter that does touch on Daigo’s “perfectness” being his weakness, which I thought was an interesting turn of events, though it didn’t really seem to change Daigo all too much, but it was still something.. The beginning episodes started out with the other members only wanting to work together when they had to, for their own different reasons. It was mainly thanks to Daigo that everyone is now really learning about teamwork, which is another key theme in the show. Dantetsu was a pretty cool character himself, though not much else I can say about him other than he did a good job following his plan. I still think Torin makes the better Silver, but to be fair, Dantetsu only became Silver near the end.

Ian has changed a lot, especially after his score with Aigaron was settled. I think Ian never liked having to look after others, which is why he struggled to become a leader while Daigo was going crazy. I imagine that losing his best friend made him not wanna be comfortable with others because he didn’t wanna lose someone close to him again. Obviously that changed after meeting Daigo, but it’s not until the penultimate episode when he’s changed the most, finally acknowledging Souji as his equal rather than just a “Boy” that he was often looking over. Souji is still my least favorite, but he stands out a lot more now. His parental issues worked as an obstacle for him since he is the youngest of the group and he was learning to carve his own path to become adult. Now that he wields Torin’s Feather Edge, his badass level has gone up.

Nossan remains my favorite because of his old man puns. The uncle figure, the clumsy one, the strong one, the devoted brother and uncle. I like that he’s a family man because these days it’s always the young ones become superheroes. Having a family meant he was putting more dedication into his work and fighting in order to keep his family safe and well. His episodes turned out to be some of my favorites, and it’s not just because his sister is played by Kinoshita Ayumi or that he has this fling with Canderrilla who is played/voiced by Tomatsu Haruka. Those are pluses! I think because Nossan was the eldest, he had the episodes that were more fun, more serious, and was just overall genuine. I go back to episode 40 where his scenes with Canderrilla are just some of the best to come out of Kyoryuger.  Not much I can say about Yuko since she was minor, but she was awesome and kicked butt as Cyan. Hey, the blue siblings!

Amy was the closest to Daigo from the start. She wasn’t that into the idea of only working with the team when needed (thus, revealing herself with Nossan in the second episode) and was the one who connected with the other Kyoryugers like Utsusemimaru and Ramirez. I like how Amy is feisty, which may be because she lived in America, but she was just as much a sweetheart as she was a royal buttkicker. Honestly, she didn’t even seem like a rich snob, even with Gentle by her side. Heck, she did waitressing as a part-time job. Her affection for Daigo is one of more real ones; it’s not cheesy, head-over-heels because she’s never felt that way before and she just doesn’t know how to react to it.Moving on, her convincing Lucky to see the good in the world turned out to be a really good angle for the eventual departing of the Deboth members.

Utsusemimaru ’s debut being early was a great choice because it meant that he would have more time to spend with the rest. For a lot of the show, he felt like a regular member because he was usually always there, which is amazing. I do wish more of his period clash played out a bit more. There’s nothing like a Warrior States samurai trying to adjust to modern day Japan. His relationship with Dogold was one of the better dynamics I’ve seen, mainly because the two once shared a body. Definitely enjoyed his rivalry with Dogold up until the end when he finally helped him regain his will to fight for his own. Torin was as wise as he was great. I enjoyed his mentor role through the season and was glad that he eventually became Silver. I know he got stoned twice, but both times I felt really sad because he felt like an actual father figure to everyone, including to Daigo, whose father was anything but a good father figure. And c’mon, he rocked out on his Giga Gaburevolver. Don’t mess with the bird. I was certainly surprised when it was revealed he was a part of Deboth but defected. That explained why he knew about the history of the dinosaurs and everything and how he was involved in creating the Kyoryuger arsenal.

Of course, you can’t talk about arsenal without Doctor Ulshade, the mad scientist and zany narrator of the show. This guy was crazy awesome. Then there’s Yayoi. Sweet, little Yayoi. Besides her hard crush for Daigo, I really liked that the team had a human support who also got to become a Ranger, the first female Violet, at that. A personal favorite and thank goodness there was another female on the team. I love that her weapon of choice was usually always the Gaburicannon in bayonet mode. Finally, the Spirit Rangers Ramirez and Tessai were a cool duo. The two were from way different places and times, but I liked the idea of dead warriors still fighting before passing on their powers to successors and then moving on to the afterlife. These two really kept things interesting in the show thanks to their personalities and fighting prowess. There’s also not much to say about Tessai’s descendant Shinya, other than that I hope Luckyuro finds out he’s the mangaka of his favorite romance manga Love Touch.

On the villain side Deboth had a colorful group. Chaos, who looked liked an evil Statue of Liberty, was pretty calm and calculating, but it’s a shame that he was still like a pawn in comparison to the short-lived Lord Deboth. At least their deaths weren’t as bad as Icerondo and Killbolero. Those two are not very memorable outside their final fights. The generals were a colorful bunch and I really enjoyed each one for being unique. That, and the Wizard of Oz theme each one had gave me a greater appreciation for their designs and their fates. Dogold’s armor dilemma was a cool concept. Endorf’s entry was a good way of spicing up the story and served as a good obstacle in Dogold’s character arc. Aigaron was such a great character on his own. The Tin Man who had a heart in the end, if only because of Canderrilla, who along with Luckyuro, were the fan-favorites and it would not have been right if the two ended up killing people and got killed. A lot of the fun episodes are because of these two, really.

The Monsters of the Week were very fun in design and personality. There was a lot to like about many of them that naming them all would make this entry longer than it needs to be. Kyoryuger had insane production values. Let’s start with having 10+ Kyoryuger suits, all of which were detailed and busy-looking. I’m guessing because of all these awesome suits, Toei had to cut back on the MotWs, but that was okay because they made each MotW memorable. Plus, the arc where they had to fight dead monsters was great because we got to see these monsters again. The miniature models for the Zyudenryu were also incredibly well done, almost like the toys. They used CGI still, but the transformations were mostly models, which have really awesome sequences. 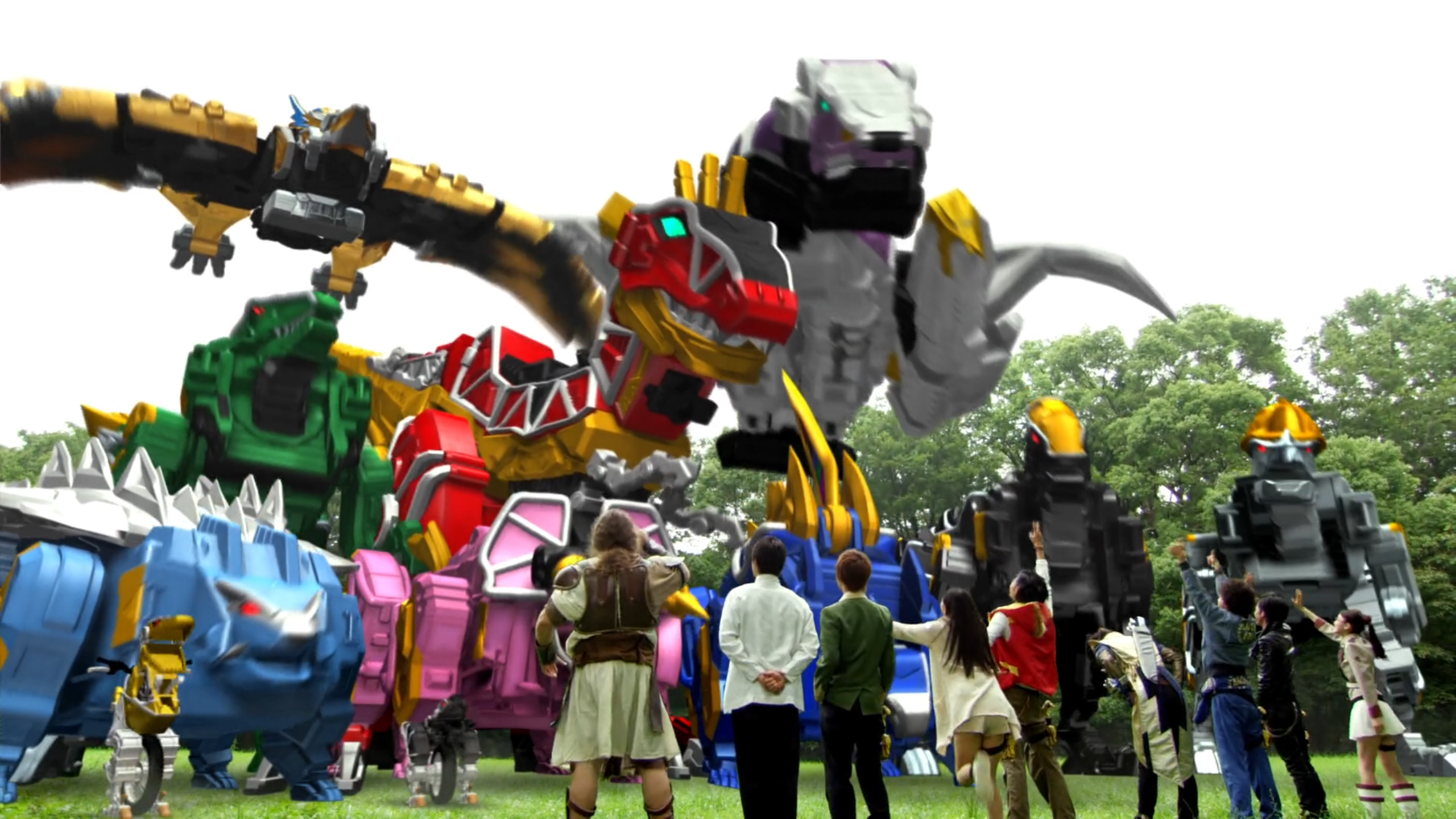 The staff and crew also deserve a lot of credit. Sakamoto’s overall direction for the series was nothing short of phenomenal. His experience in Power Rangers shows in a dozen of these episodes where there are a lot of unmorphed and morphed choreographed fights, handicam shots, dutch angles, and explosions everywhere. Another big hand to the stunties for doing some awesome new stuff every year. Kyoryuger is absolutely fun and exciting. There’s a lot of ridiculousness like the samba dancing, but they are justified through the storytelling, which is pretty good in itself. There’s a lot of enjoyment you can get out of this by the sheer number of heroes and unique combinations of finishers or mecha that they pump out almost every episode to keep things fresh and cool. It definitely deserves to be the bravest.