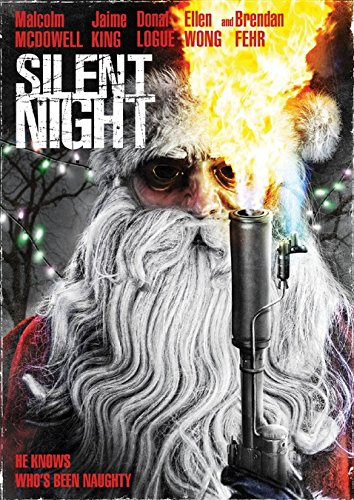 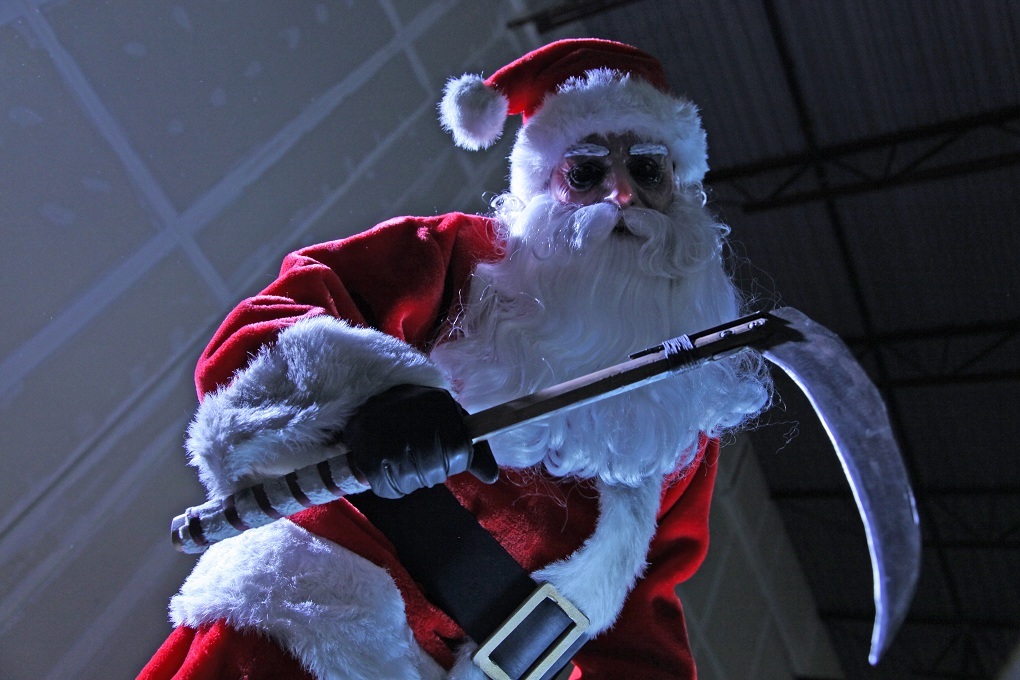 A mysterious man dresses in a Santa Claus suit, complete with a mask. Once dressed, “Santa” captures and kills Jordan (Brendan Fehr), a police officer in the small town of Cryer, Wisconsin. Jordan is sleeping with the married Alana Roach (Ali Tartaryn) and is electrocuted with Christmas lights in his home. The following day, Christmas Eve, the Sheriff of Cryer, Sheriff Cooper (Malcolm McDowell), calls Deputy Aubrey Bradimore (Jaime King) in on her day off when Jordan doesn’t arrive at work. Aubrey is a new addition to the police force, and is still reeling from the unexpected death of her husband John. She doesn’t think she’s a good officer as she is trying to live up to her father, who is a retired cop. Aubrey was going to spend the holiday with her parents but instead goes out to check on Jordan, finding his mangled body and Roach torn apart later in the day. Sheriff Cooper decides not to tell Mayor Revie (Tom Anniko) until the case is solved. 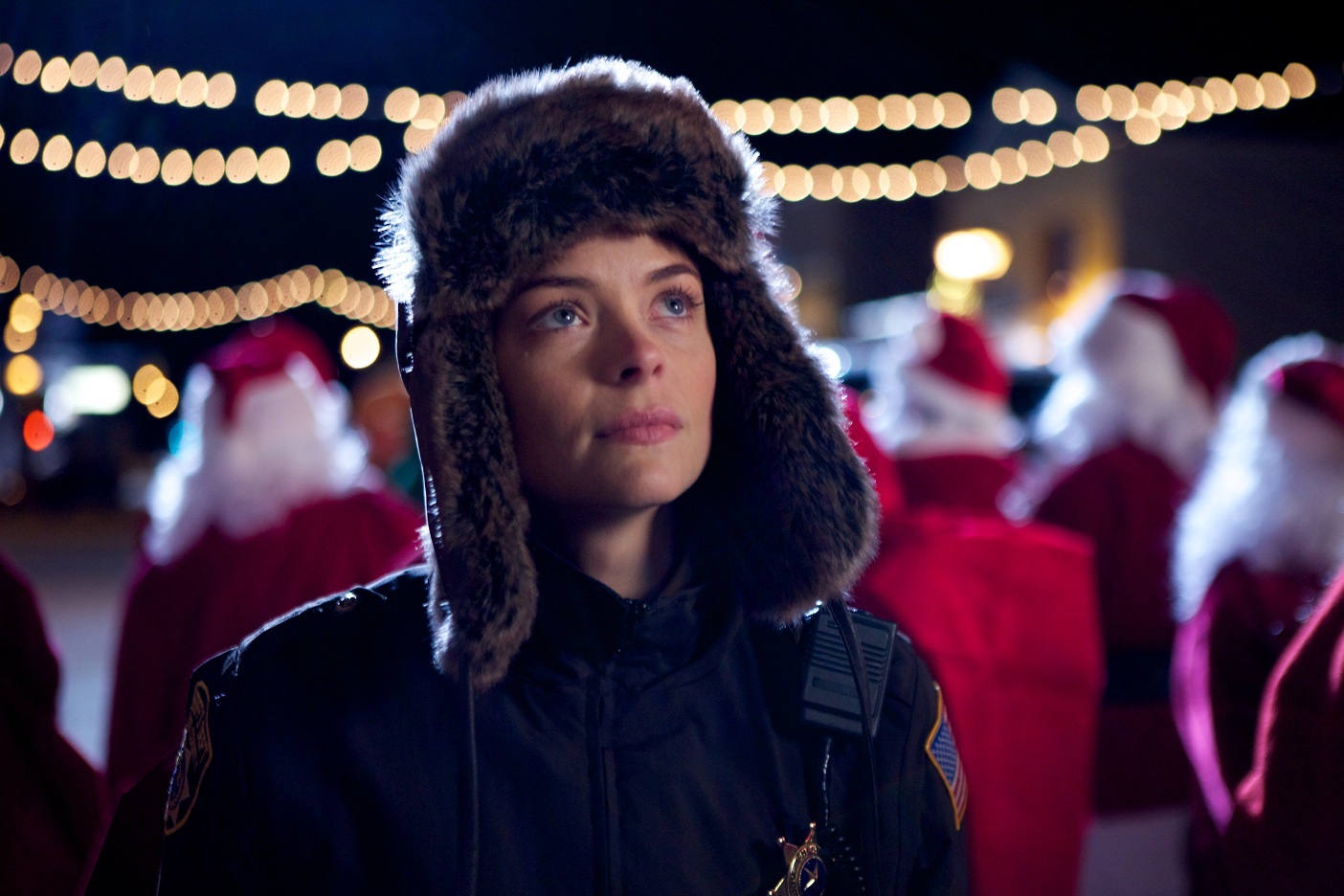 Meanwhile, the masked Santa killer goes on a murder spree, killing those who have done something he considers ‘naughty.’ His next victim is a bratty teenage girl who he kills with a taser, then he makes his way to the local motel, murdering a group of people during a softcore porn shoot. One woman manages to escape and tries to hide inside a Christmas Tree farm, but the killer chops off one of her legs and throws her feet-first into a woodchipper. Sheriff Cooper calls in Deputy Stanley Giles (Andrew Cecon) and goes out to find the killer himself, but comes back empty handed. Aubrey starts to suspect Santa Jim Epstein (Donal Logue), a local drunken Santa portrayer, drug dealer Stein Karsson (Mike O’Brian), and the perverted Reverend Madely (Curtis Moore). 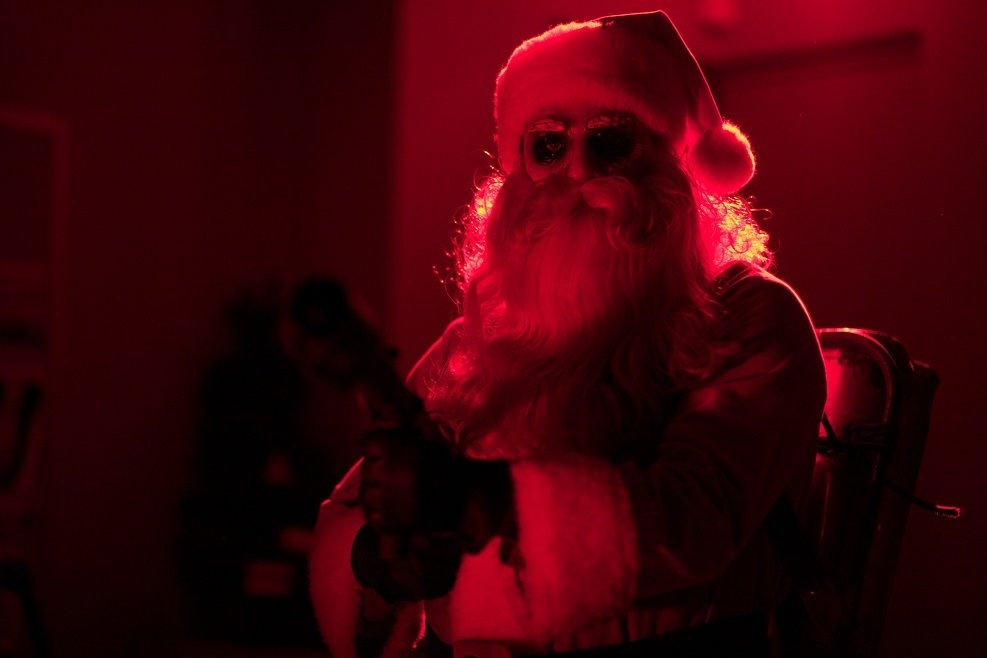 Aubrey attempts to interrogate Karrson, but he flees. Aubrey gives chase, but is nearly killed and only saved by Cooper. That evening, during the town’s annual Christmas parade, Aubrey searches for the killer, but is unable to identify him among a crowd of men dressed in Santa Claus suits, though she arrests Jim when he flees from her. The killer Santa continues on his spree, murdering Mayor Revie, his porn star daughter Tiffani (Courtney-Jane White), and her boyfriend Dennis (Erik J. Berg). The killer then arrives at the church and kills Reverend Madely for stealing donation money. Aubrey goes to Karrson’s motel room to arrest him, and is forced to kill him when he draws a gun. 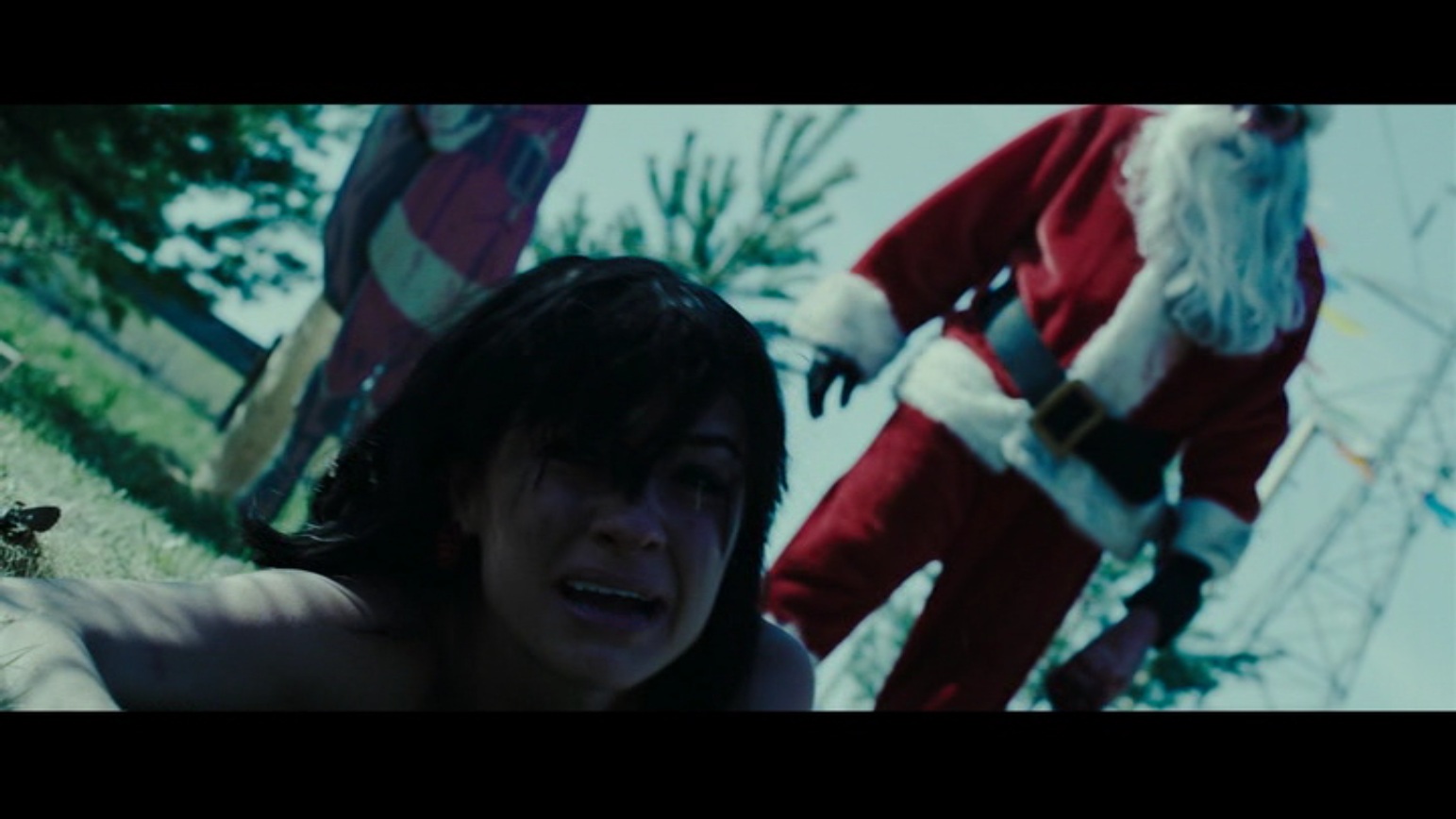 Aubrey notices a gift box that contains a piece of coal, and recalls that both the station and her father had received the same gift. Aubrey arrives at her parents’s home, only to find her father dead. Meanwhile, the killer attacks the station, killing Cooper, Giles, and Jim. Aubrey, along with the station secretary Brenda (Ellen Wong), are cornered by the killer inside the police station, where the killer tries to burn down the place with a homemade flamethrower. Aubrey is able to overpower the killer Santa and sets him on fire, but in the end he manages to escape.It is later revealed that the killer Santa is Ronald Jones Jr., owner of a local chimney cleaning and repair service, and he survived the flamethrower attack. During the hunt for the killer, Aubrey learns from another Santa portrayer that Ronald Sr. had crashed his ex-wife’s Christmas party many years ago, burning her alive with the homemade flamethrower. Aubrey’s father was the police officer that responded to the situation and gunned him down, only to find out that Ronald Jr. was in his father’s truck watching the entire time. The tragedy caused Ronald Jr. to go insane and seek revenge, dressing as Santa so he would not get caught during Cryer’s Christmas festivities.

Now this is not a straight forward remake of SILENT NIGHT DEADLY NIGHT, but it does pay homage in a few scenes, if you remember how Linnea Quigley dies in the original you’ll know what i mean….its a solid film based on its own merit and storyline, some great gore and death scenes, and good acting by the most of the cast..unfortunately apart from Malcolm Mcdowell, who plays the sheriff, terrible dialogue and terrible acting, that was the only issue i had with it, because all round a great seasonal slasher, this will definitely be on the slasher/ horror list to watch every Christmas with all the rest, 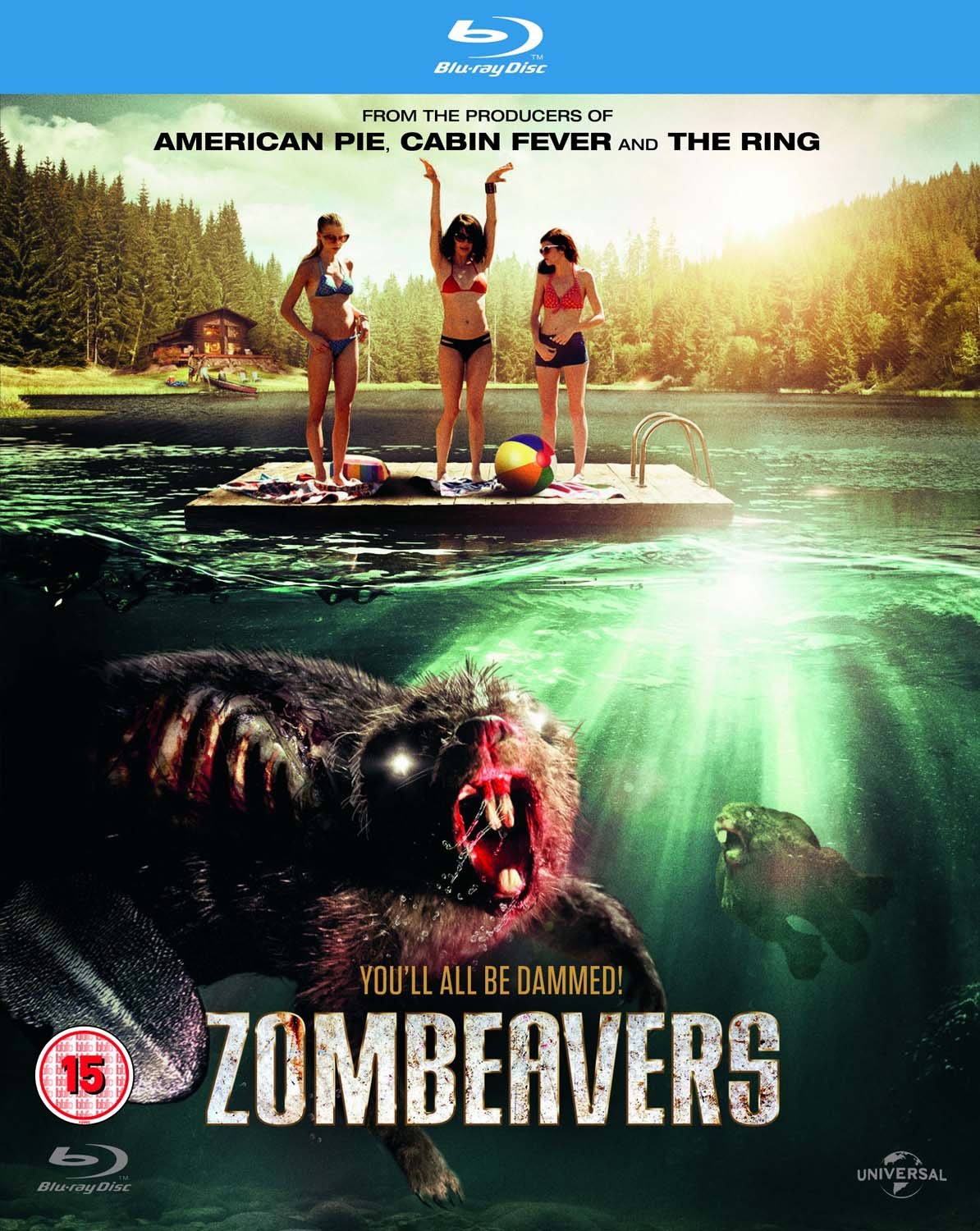 While transporting toxic chemicals, a pair of truckers (one of which is played by the comedian Bill Burr) strike a deer and lose one of their canisters. It rolls into a river, floats downstream, and splashes several beavers at their dam. Later, college students Mary, Zoe, and Jenn arrive at Mary’s cousin’s cabin near the dam. Although Zoe and Jenn are distraught that there is no cell phone coverage, Mary insists that they spend the next two days without interruptions from technology or boys. While swimming at the lake, the girls discover the beaver dam. When Jenn swims closer to see a beaver, they are surprised by a bear. Smyth, a local hunter, scares off the bear and admonishes the girls to stay away from the beavers and dress more appropriately.

At night, the girls’ boyfriends – Buck, Tommy, and Sam – arrive and play a prank on them. Annoyed, Mary orders them to leave, but Zoe, who knew they were coming, insists they stay. Jenn talks Mary into letting them stay, as she wants to resolve her relationship issues with Sam, who has cheated on her. As the couples separate, Jenn leaves to take a shower, only to be attacked by a beaver. Tommy kills it with a baseball bat, but Jenn and Mary feel something is wrong with it beyond rabies. They put the corpse in a bag and put it outside on the porch. In the morning, they discover it is missing, and Jenn insists that it was not merely eaten by wildlife.

All but Jenn go swimming in the lake. Sam and Mary discuss whether to tell Jenn about their affair, but they are interrupted when beavers chew off Buck’s foot and scratch Tommy. The same beaver that attacked Jenn earlier chases her back to the house. She pins it to the counter with a knife, but not before it scratches her leg. Sam throws Zoe’s dog into the water as a distraction, and the rest of the group flee to the house, where they realize the beavers have cut the phone lines. As zombie beavers surround the house, Tommy offers to leave with Buck to get help, and Zoe accompanies him.

The beavers bring down a tree in the road, and Tommy sets off on foot, only to be crushed by another falling tree. Smyth rescues Buck and Zoe, and they return to the house, which the others have boarded up. Unable to enter it, they go to the neighbors’ house. They discover the neighbors are dead, and their phone lines cut. As a result of her wounds, Jenn turns into a beaver-like zombie and attacks Mary. As Jenn’s saliva falls in Mary’s mouth, Sam rescues Mary by hitting Jenn from behind. Mary and Sam lock themselves in the bathroom and check each other for scratches. Satisfied that neither is wounded, they begin to have sex, but Jenn interrupts them and kills Sam by biting off his penis. Meanwhile, Buck turns into a zombie and attacks Smyth. Zoe escapes by jumping through a window, bloodying herself in the process.

As a beaver accidentally sets Mary’s cousin’s house on fire, Sam rises as a zombie. Once Mary kills Sam, she reunites with Zoe. Smyth, now zombified, shoots at them as they flee in his truck. Jenn jumps on top the truck, but Zoe runs her over. Together, Mary and Zoe reach the spot where Tommy died and turned into a zombie. With the road blocked, they decide to walk. Believing that Zoe may be bitten due to her bloody appearance, Mary holds her at gunpoint with a pistol recovered from Smyth’s truck. As Zoe protests that she is not infected, Mary begins changing into a zombie. Zoe kills her with an axe and walks away. On the road, she encounters the same truckers who had earlier dropped the canister, and they run over her accidentally. In a post-credits sequence, a honeybee becomes infected from a corpse and returns to its hive in a zombified state.

Well, as soon as I saw Zombeavers advertised on Blu-Ray, I knew I had to watch it. The storyline is predictable, the same as most low budget mutated animal films. Right from the off you can tell that the film isn’t taking itself seriously, which is exactly how these sort of films should be made. The acting is okay-ish, not the worst I have seen by far! The dialogue is actually not that bad either, which makes a change! The effects are my absolute favourite part of this film, they are mainly puppets and they do not heavily rely on irritatingly bad CGI., so this film took it back to the old school horrors. It is well worth a watch if you fancy a gory giggle.