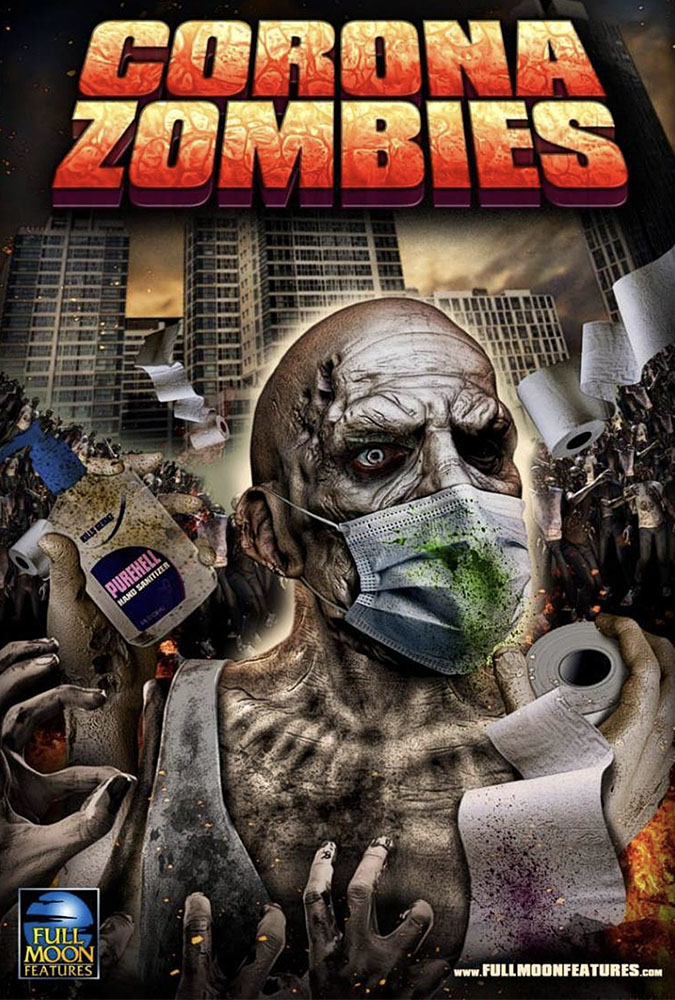 Well, it was bound to happen. You really didn’t we’d get through this pandemic without a movie based on real life events, did you? Someone was bound to cash in on the crisis, and that person was none other than Charles Band of Full Moon Features. Honestly, besides maybe Lloyd Kaufman of Troma, Band is the person I believe best suited to make this ridiculously. Well he made it, and it’s damn funny.

Corona Zombies follows the current event dealings with the Covid-19 virus. In the film, a special military group, known as the Corona Squad, are tasked with finding a crime kingpin who has stolen an enormous supply of toilet paper for himself and his goons. They fight their ways through the unrelenting jungle of Baltimore, MD (yes you read that correctly), fighting off hoards of the undead. We also take a glimpse into the life of the bubbly blonde called Barbie, as she tries to make it through the government imposed quarantine.

Does this sound ridiculous? It absolutely is. But it’s even more ridiculous than you think. See, Corona Zombies isn’t really a full brand new movie. There are some new scenes shot, for sure, but those scenes are spliced with scenes from two other films. One of those movies is Zombies vs Strippers, and the other is the Italian zombie flick Hell of the Living Dead. With these three films edited together to become one, all new dialogue was recorded and dubbed over the existing footage to produce a new narrative.

So is Corona Zombies a good movie? Well, not exactly. But that doesn’t mean I didn’t enjoy the hell out of it. It was a hysterical satire dealing with the real life pandemic, as well as the government’s inept response to it. Some dialogue does fall flat, but there are lots of others that are so stupid I was cracking up. It’s not high brow humor, and it ain’t going to win any awards, but it was a lot of fun. The movie is barely an hour long, which does make it feel kind of rushed, but that’s because it was. The poster for the film was released the day after Band came up with the idea, before anything was really on paper. The film was finally completed just this Thursday, the DAY BEFORE it debuted on the Full Moon Features streaming service. Now I really wish we would get a brand new, feature length film about Corona Zombies.

This film is not for everybody. No doubt many people will decry this as being in bad taste, and those people are probably correct. That being said, there is definitely an audience of folks out there who are into this kind of slapstick, poor taste horror comedy, and those people will enjoy it.