The film finds Aldovia’s King Richard (Ben Lamb) and former New Yorker, Queen Amber (Rose McIver), awaiting their first-born child. However, before they can take a break from their royal duties and prepare for the baby’s January due date, Richard and Amber have to renew the treaty that ended the war between Aldovia and the nearby (and equally imaginary) country of Penglia on Christmas Eve 600 hundred years prior. Though Richard and Amber want to modernize the process by allowing the queens to also sign the treaty for the first time, King Tai (Kevin Shen) and Queen Ming (Momo Yeung) are very traditional and refuse. The point becomes moot, though, when the scroll combining the previous treaties disappears and, if it’s not found and signed by midnight on Christmas Eve, then not only will the war between the countries resume, but a curse will befall Aldovia’s unborn royal baby.

Considering Richard and Amber’s behavior in the previous film, maybe that baby deserves to be cursed. Much of what made The Royal Wedding so frustrating was that it depicted Richard and Amber as such terrible rulers that Aldovia seemed on the cusp of revolution and they don’t do much to change that here. Though Amber spent the last year studying Aldovian history and seemingly winning over everyone in the kingdom (at least, according to her own blog post), the first thing she does when meeting the Penglian royals is to commit a faux pas by *checks notes* introducing herself? It’s a bizarre moment not just because writer Nate Atkins doesn’t give the audience enough context to understand why Amber’s actions would draw literal gasps from the spectators, but because the standoffishness between the Aldovians and Penglians in that scene so quickly becomes irrelevant.

Atkins clearly saw Crazy Rich Asians and in those first moments, Queen Ming feels embarrassingly like a rip-off of Michelle Yeoh’s Eleanor. From the second she steps out of the car, Ming is already looking down her nose at Amber and continues to condescend to her in the following scenes. So, when the scroll disappears, the natural assumption is that it would spark an international incident. Instead, not only to the Aldovians act as if the disappearance of this priceless historical artifact isn’t a big deal, but Amber and Richard decide that the best way to smooth over this diplomatic nightmare is to pass the Penglians of to former villain, Simon (Theo Devaney) to play a traditional Aldovian board game about who can decorate Christmas tree the best.

In any other film, that scene would irrevocably turn the audience against it, but it’s precisely the film’s conviction that the magic of Christmas (and, on some level, Amber’s journalistic skill) will solve everything that ultimately makes it not only so hard to take seriously, but so inexplicably pleasant. Is it utterly unbelievable that Amber and Richard wouldn’t care about finding the missing scroll until they hear about the possible curse? Absolutely, but adding such an insane twist also makes realism irrelevant. Does it make no sense that stuck-up Ming would not only be fairly calm about being separated from her three children over the holidays, but would willingly go to the Aldovian Christmas Market to mingle with commoners? Completely, but nothing that matters in the real world actually matters in the Christmas Prince universe and that’s why it’s so fun

.More than any previous Netflix Christmas film, A Christmas Prince: The Royal Baby is pure escapism. Sure, you could complain about how illogical the story or character beats are, but that would be missing the point. These films are about getting swept up in the magic of Christmas and the consuming power of love. And more than any film before it, Baby makes that total break with reality look like art.

One year after the events of the first film, Amber and Richard are still happily engaged. At Christmas time, Amber and her father, Rudy, travel to Aldovia to plan Amber’s wedding. Amber continues to blog about royal life with Richard. Amber becomes overwhelmed with the dictatorial traditions of royal protocol and lack of control over her own wedding, which is controlled by the flamboyant designer Sahil and Mrs. Averill, as Richard struggles with the failing implementation of his Aldovian economic revitalization program, the New Aldovia initiative, which is mysteriously hemorrhaging money from the monarchy as unemployment and low wages afflict the increasingly discontent populace. To assist in the economic efforts, Queen Helena brings in Lord Leopold to assist Richard, as Leopold had been planning aid efforts with Richard’s late father. Meanwhile, Simon, impoverished due to his divorce from Sophia, also returns to beg to be brought back into the palace; a resentful Richard reluctantly accepts, as Simon is family.Amber and Richard’s relationship grows strained as Richard becomes increasingly distracted with royal demands, and Amber refuses to kowtow to Mrs. Averill’s strict guidelines. After Princess Emily’s play is cancelled due to a strike by governmental workers, Amber hosts the play at the palace. While the move was well-received, Amber becomes furious when Mrs. Averill takes down posts from her blog about the affair due to their casual nature, and is further enraged when Sahil and Mrs. Averill demand she remove her locket (containing her late mother’s photo) for a royal portrait.After receiving a bitter Christmas card from an unemployed worker, Amber investigates the royal finances with her friends, who have come to celebrate her wedding. She learns that the New Aldovia initiative has been failing because a group of new companies has been outbidding local workers and taking the money out of the country. During a paparazzi ambush, she’s saved by Simon, who wants to help investigate the economic issue. With Emily’s help, the group hacks into a site that the shell companies are owned by an association, Glockenspiel Consortium. Mrs. Averill confronts Richard and Amber over paparazzi photos of Amber at a bar while investigating, and Amber admits to the sleuthing. When Richard fails to defend her against Mrs. Averill, she storms out. Richard admits his failings as a fiance to Emily, and after finding Amber, the two reconcile.

During a royal celebration, where Helena gives Amber the blessing to have the ceremony she wants, the group reveals that Glockenspiel Consortium is owned by Leopold, who is accosted and thrown into the palace dungeon. Richard gives a Christmas address that promises holiday bonuses to all Aldovian workers, and the populace celebrates. Richard and Amber finally marry in a ceremony that blends tradition with modernity, and everyone celebrates as Richard and Amber leave to share a private kiss.As a cute, typical, royal romance and Christmas movie, I think it delivers. Yeah it’s cheesy, but of course it is! I watched the first one and it’s the same thing! I think it’s a charming, cheesy, Christmas romance. That’s what we expected.

An aspiring young American magazine journalist, Amber Moore, is sent to the foreign nation of Aldovia to cover a press conference with the crown prince Richard, who is set to take the throne following his father’s recent death. Richard is alleged to be an irresponsible playboy and is also rumored to be planning to abdicate. Amber hopes her work in Aldovia will lead to a big break and she heads to the royal family’s palace for the press conference, but the prince fails to appear, frustrating the assembled journalists. Amber decides to snoop around the palace and while doing so is mistaken for young Princess Emily’s new tutor. Amber takes the opportunity to go undercover to investigate the rumors of abdication. 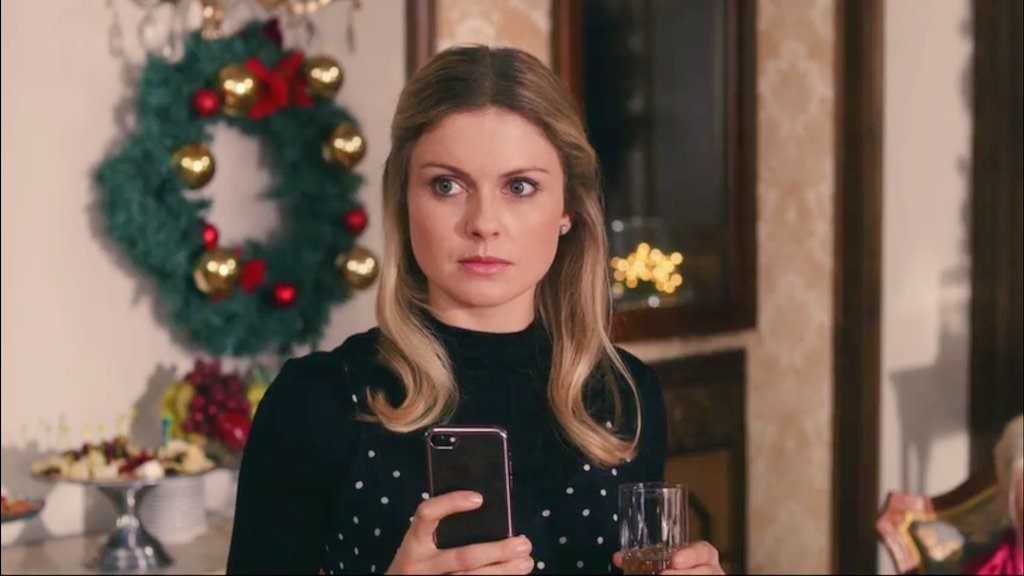 Emily, who has spina bifida, intentionally tries to prank Amber into quitting, but soon warms up to her after Amber treats her like a normal girl. Amber also meets Richard, whom she is embarrassed to realize she insulted earlier after he, incognito, stole the cab she was about to get into at the Aldovian airport. Amber quickly becomes attracted to Richard upon learning that, contrary to rumors, he is actually a compassionate and responsible family man, though he is indeed reluctant to take the throne. During this time she also learns from Emily that Richard’s cousin Simon is next in line for the throne, which he sorely wants; Amber also encounters Richard’s ex-girlfriend Sophia, who Richard suspects was only interested in him for his future title. Amber is eventually confronted by Emily, who reveals that she knows the truth about her identity. Amber prepares to leave, but Emily agrees to not reveal her secret so long as she writes a story that exposes Richard for the real person he is and ends the negative rumors about him.

After Amber follows Richard on horseback through the woods, her horse throws her off and she is nearly attacked by a wolf, only to be saved by Richard. While warming up at his father’s old hunting cabin, the prince reveals to her that he told his father he was going to renounce the throne; they had a fight over the decision, and the king died soon after. Richard shows Amber a mysterious poem written by his father, and the two almost kiss but are interrupted by the sound of neighing horses. After Richard leaves to check on the animals, Amber searches the late king’s desk and discovers a hidden compartment holding documents which prove that Richard was secretly adopted. Amber is reluctant to reveal the truth, as it would deeply hurt Richard, but decides to tell him during a walk; he kisses her instead, and she realizes she is in love with him. At the same time, a suspicious Sophia and Simon search Amber’s room, discovering not only her true identity but Richard’s adoption certificate.

At the Christmas Eve Ball, Richard prepares to be crowned, only for Sophia to reveal his adoption and Amber’s true identity. Simon asserts himself as next in line for the throne as Richard storms off and rebuffs a repentant Amber’s apologies, and she tearfully leaves the palace. The queen reveals to Richard that she adopted him after being told she could not have children, and that she regretted not telling him sooner, but that she and the king considered him their true son. The two reconcile, and Richard promises to not let Simon win the throne so easily.  Simon marries Sophia, but learns he cannot be crowned until the queen is available to preside over the ceremony. Meanwhile, Amber suspects that she can prove Richard is the rightful king based on clues from his father’s poem. She is allowed back into the palace and unearths a secret proclamation in a Christmas ornament made by the king which declares Richard as the rightful heir. Amber carries the document to the official chamber where Simon is being crowned, and she intervenes in time for Richard to be crowned instead, quietly slipping out of Aldovia afterwards.

Back home, Amber’s story on Richard is refused for being a puff piece. In anger, she quits the magazine, deciding to blog about the true Richard instead. Her blog becomes popular and eventually gains the attention of Richard himself. Amber spends New Year’s Eve at her father’s diner, where Richard surprises her and proposes to her, and she happily accepts.

This is cheesy and a straight-shooting plot line. It’s an easy watch, enjoyable movie. It’s a good film for the Christmas season.