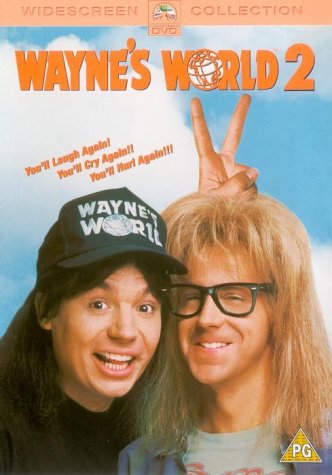 Rock-and-roll fans Wayne Campbell and Garth Algar now host their public-access television television show, Wayne’s World, from an abandoned factory in Aurora, Illinois. After an Aerosmith concert, Wayne has a dream in which he meets Jim Morrison and a “weird naked Indian” in a desert. Morrison convinces Wayne that his destiny is to organize a major music festival. Wayne and Garth dub the concert “Waynestock” and hire Morrison’s former roadie, Del Preston. Their early attempts to sign bands and sell tickets fail, and Wayne wonders if the endeavor is futile.Wayne’s girlfriend Cassandra, singer of the band Crucial Taunt, has a new producer, Bobby Cahn, who tries to pull her away from Wayne and Illinois. After Wayne admits spying on her due to his suspicion of Bobby’s ulterior motives, Cassandra breaks up with him and becomes engaged to Bobby. Garth meets a beautiful woman, Honey Hornée, who attempts to manipulate Garth into killing her ex-husband, but Garth ends the relationship. Tickets are sold for Waynestock but no bands arrive. Leaving Garth to keep the rowdy crowd in check, Wayne disrupts Cassandra’s wedding before escaping the ceremony with her. Meanwhile, Garth has stage fright during the concert. Wayne returns to find the bands have still not arrived. In the dream desert, Wayne and Garth consult Morrison, who says that the bands will not come and that all that matters is they tried. They become lost in the desert. Finding this unacceptable, Wayne and Garth reenact the ending of Thelma & Louise, driving their car off a cliff while trying to find the bands. Finally, Wayne and Garth stage an ending in which the bands arrive and Waynestock is a success. After the concert, the park is covered with trash and the “weird naked Indian” cries. Wayne and Garth begin to remove the litter, promising to clean the entire park.Honestly if someone asked me if Wayne’s World 2 is worth the watch, I’d definitely say yes. This is always guaranteed a good laugh, just Garth’s story alone with Kim Bassinger as Honey Hornee is worth the look. I also love the scene where the guys end up in a gay bar and end up singing “Y.M.C.A.” song. Also Christopher Walken is in this movie, what more do you need to watch a movie? Christopher was such a great addition to the characters and made a great villain. It was great to see all the characters back together and this was a fun sequel, so if you need a good laugh, don’t hold back, this is a movie that is sure to tickle you’re funny bone.

A massive meteor shower destroys the orbiting Space Shuttle Atlantis and bombards a swath of land from the U.S. East Coast from South Carolina through Finland. NASA discovers that a rogue asteroid the size of Texas passed through the asteroid belt and pushed forward a large amount of space debris. The asteroid will collide with Earth in 18 days, causing an extinction event that will even wipe out bacteria. NASA scientists, led by Dan Truman, plan to trigger a nuclear detonation 800 feet (240 m) inside the asteroid to split it in two, driving the pieces apart so both will fly past the Earth. NASA contacts Harry Stamper, considered the best deep-sea oil driller in the world, for assistance. Harry travels to NASA with his daughter Grace, to keep her away from her new boyfriend and one of Harry’s drillers, A. J. Frost. Harry explains he will need his team, including A. J., to carry out the mission. They agree to help, but only after their list of unusual rewards and demands are met.

NASA plans to launch two shuttles, Freedom and Independence, to increase the chances of success; the shuttles will refill with liquid oxygen from the Russian space station Mir before making a slingshot maneuver around the Moon to approach the asteroid from behind. NASA puts Harry and his crew through a short and rigorous astronaut training program, while Harry and his team re-outfit the mobile drillers, “Armadillos”, for the job. The destruction of Shanghai by an asteroid fragment forces NASA to reveal the asteroid’s existence, as well as their plan. The shuttles are launched and arrive at Mir, where its sole cosmonaut Lev helps with refueling. A major fire breaks out during the fueling process, forcing the crews, including Lev, to evacuate in the shuttles before Mir explodes. The shuttles perform the slingshot around the moon, but approaching the asteroid, the Independence’s engines are destroyed by trailing debris, and it crashes on the asteroid. Grace, aware A.J. was aboard the Independence, is traumatized by this news. Unknown to the others, A.J., Lev, and “Bear” (another of Harry’s crew) survive the impact and head towards the Freedom target site in their Armadillo.

Meanwhile, Freedom safely lands on the asteroid, but overshoots the target zone, landing on a much harder metallic field than planned, and their drilling quickly falls behind schedule; in desperation, the military initiates “Secondary Protocol” to remotely detonate the nuclear weapon on the asteroid’s surface, despite Truman and Harry’s insistence that it would be ineffective. Truman delays the military, while Harry convinces the shuttle commander to disarm the remote trigger. Harry’s crew continues to work, but in their haste, they accidentally hit a gas pocket, blowing their Armadillo into space. As the world learns of the mission’s apparent failure, another asteroid fragment devastates Paris.

All seems lost until the arrival of the Independence’s Armadillo. With A.J. at the controls, they reach the required depth for the bomb. However, flying debris from the asteroid damages the triggering device, requiring someone to stay behind to manually detonate the bomb. The crew draw straws, and A.J. is selected. As he and Harry exit the airlock, Harry rips off A.J.’s air hose and shoves him back inside, telling him that he was the son Harry never had, and he would be proud to have A.J. marry Grace. Harry prepares to detonate the bomb and contacts Grace to bid his final farewell. After some last minute difficulties involving both the shuttle engines and the detonator, the Freedom moves to a safe distance and Harry manages to press the button at the last minute, while experiencing flashbacks of happy times in his last moments as the bomb successfully splits the asteroid, avoiding the collision with Earth. Freedom lands, and the surviving crew are treated as heroes. A.J. and Grace get married, with photos of Harry and the other lost crew members present.

This movie is pure escapism fun, which has its place in my collection, movies like Independence Day and Armageddon are great fun to watch and as a bonus the characters weren’t bad the script was reasonable and action was indeed plentiful.

Harry Tasker leads a double life, performing covert missions for the U.S government under a counter-terrorism task force called “The Omega Sector” using the cover of a traveling computer salesman. Albert “Gib” Gibson and Faisal assist him in these missions under the command of Spencer Trilby. However, Harry’s wife, Helen, and his daughter, Dana, believe he is a boring computer salesman who does a lot of “corporate” travel. Harry’s latest mission in Switzerland reveals the existence of a Palestinian terrorism organization group known as the Crimson Jihad, led by Salim Abu Aziz. Harry suspects that antiques dealer Juno Skinner has ties to Aziz. After visiting her, Harry is chased by Aziz’s men through a shopping mall and a large hotel, meanwhile missing the birthday party that his wife and daughter have arranged for him.

Harry plans to surprise Helen the next day at her office to take her out to lunch but overhears her talking to a man named Simon. He uses his connections in Omega Section to learn that Simon is a used car salesman, pretending to be a covert agent to flirt with Helen. Harry and other Omega agents, disguised, kidnap Helen while she is at Simon’s trailer while frightening Simon to stay away from her. Harry, using a voice masking device, interrogates Helen and learns she sought adventure with Harry gone all the time. Harry arranges for Helen to participate in a staged spy mission, where she is to seduce a mysterious agent in his hotel room (in actuality, Harry himself, who hopes to surprise Helen) and plant a tracking bug on him. However, Aziz’ men burst in, kidnap both of them, and take them to an island in the Florida Keys.

Aziz reveals he possesses small nuclear warheads hidden inside antique statues shipped by Juno and plans to detonate one to demonstrate his power, before ordering his men to torture the two. Harry, under a truth serum, reveals his double life to Helen but breaks free and rescues her. They secretly watch as Aziz prepares to detonate one of the warheads on the island in 90 minutes, take one of the warheads into downtown Miami by helicopter, and transport the remaining missiles by truck into the US over the unguarded Overseas Highway. Harry leaves Helen in a safe place as he attacks Aziz’ men, but Helen is captured by Juno and taken with the convey on the Overseas Highway. Harry is rescued by Gib and other Omega Sector operatives who had pinpointed the island’s location using a tracking bug planted earlier in Helen’s purse by Harry and Gib. Assisted by two U.S. Marine Harrier jets, the agents in a helicopter pursue the terrorist convey, destroying part of the bridge to stop the trucks. Harry rescues Helen from Juno’s limo before it falls over the destroyed section. The jets return to the mainland before the first bomb goes off, while Harry and Helen passionately kiss.

After the detonation Harry learns from Gib that Aziz and his men have taken control of a downtown Miami skyscraper and have kidnapped Dana, threatening to detonate the second bomb in downtown Miami. Harry commandeers one of the jump jets to reach the skyscraper quickly, leaving Helen on the Highway barefoot and worried. Faisal poses as part of a requested camera crew for Aziz to make his demands, providing enough distraction for Dana to steal the control key and flee the room. Aziz chases Dana onto an overhead crane while Harry arrives. Using the Harrier’s ability to hover, Harry is able to rescue Dana from the crane but Aziz also falls onto the plane. During the encounter Harry banks the craft, causing Aziz to slip off the plane and become entangled on one of the plane’s missiles. Harry fires the missile through the now-empty skyscraper, destroying a helicopter with Aziz’ reinforcements and naturally killing Aziz. Harry, Helen, and Dana are safely reunited.

A year later, the Tasker’s family integrity has been restored; Harry is able to balanced his career and quality times with his family, and Helen now also works for Omega Sector. Harry and Helen are called to embark on a new mission together, where they encounter “Simon” again, who is a waiter serving champagne and telling a female attendee at the event that he is actually a secret agent on a mission. Using her new skills, Helen intimidates Simon into leaving, just before a tango begins with Harry and Helen taking their places to complete their mission.

One of the big box-office hits of 1994, I was surprised to see True Lies didn’t inspire any genuine imitators. Just as well, I suppose, there’s only so much Bond “parody” you can see without the material getting tiresome. But True Lies’ charms lies in that it works as parody while still excelling as a straight action thriller. When it comes to pure direction, that’s proof James Cameron can be a genius.