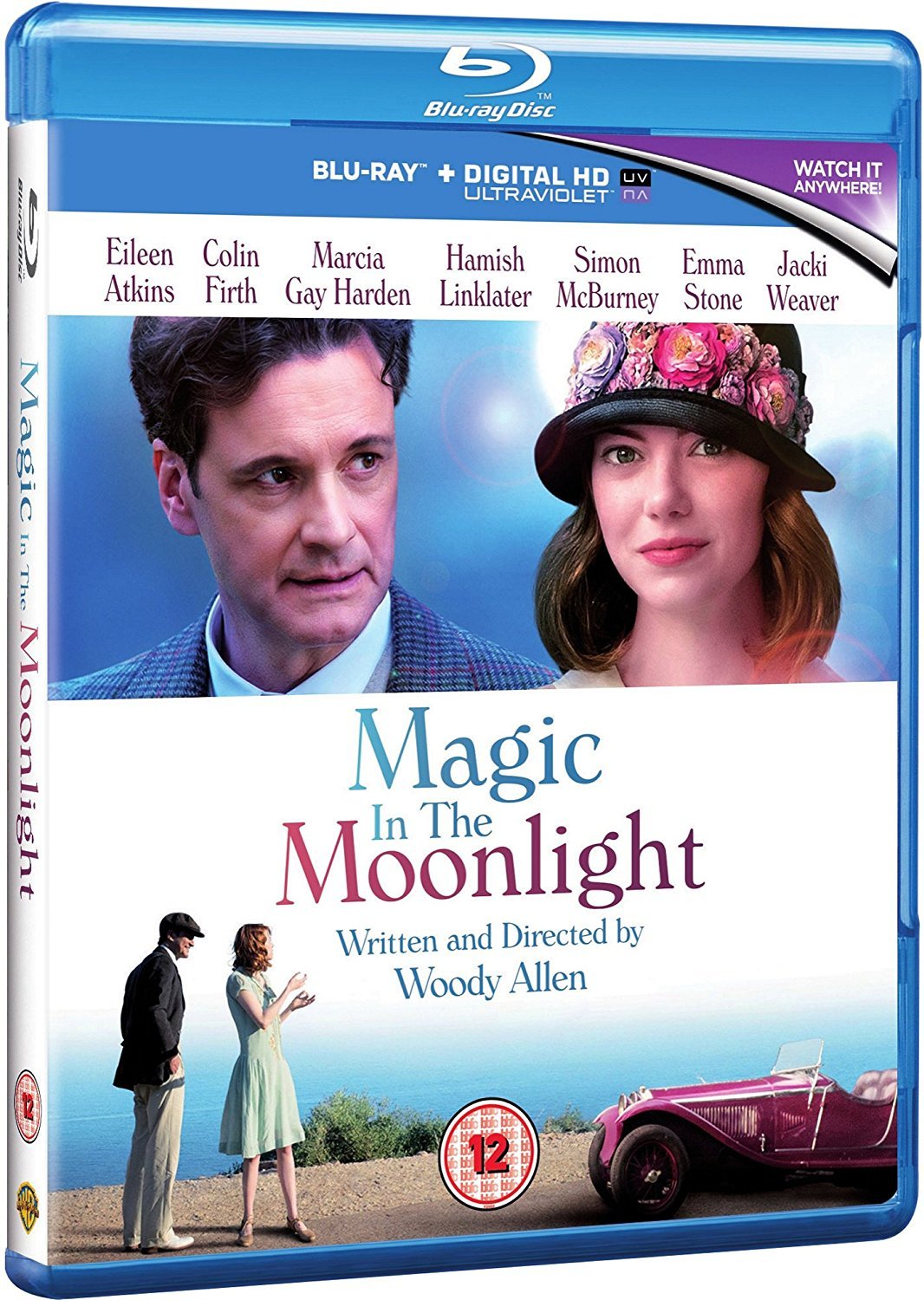 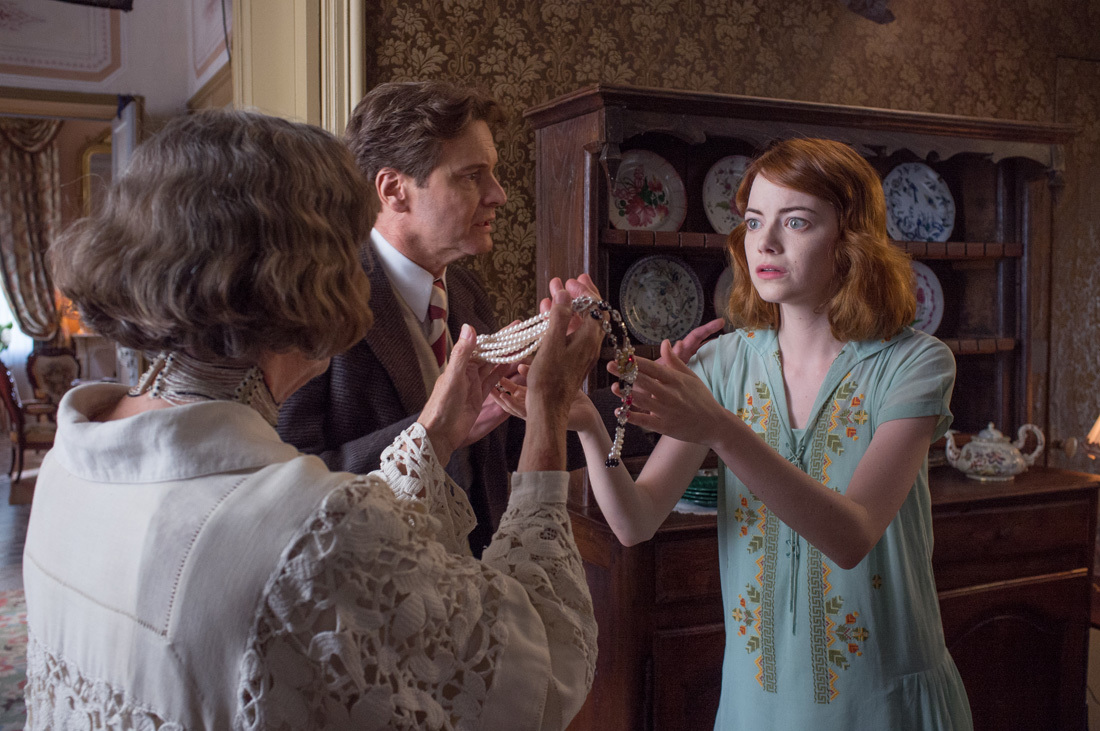 In 1928, a globally famous illusionist, Wei Ling Soo, performs in front of a crowd in Berlin with his world-class magic act. As he walks off stage the film audience sees that he is actually a British man named Stanley (Colin Firth). He berates his employees and is generally curmudgeonly towards his well-wishers. In his dressing-room, he is greeted by old friend and fellow illusionist Howard Burkan (Simon McBurney). Howard enlists Stanley to go with him to the Côte d’Azur where a rich American family, the Catledges, has apparently been taken in by a clairvoyant and mystic, Sophie (Emma Stone). In fact, the son of the family, Brice (Hamish Linklater), is smitten with Sophie, and his sister Caroline (Erica Leerhsen) and brother-in-law George (Jeremy Shamos) are concerned Brice is considering proposing marriage. Howard says that he has been unable to uncover the secrets behind her tricks and he admits that the more he watched her the more he believed she really has supernatural powers. So he would like Stanley, who has debunked charlatan mystics in the past, to help him prove she is a fraud. 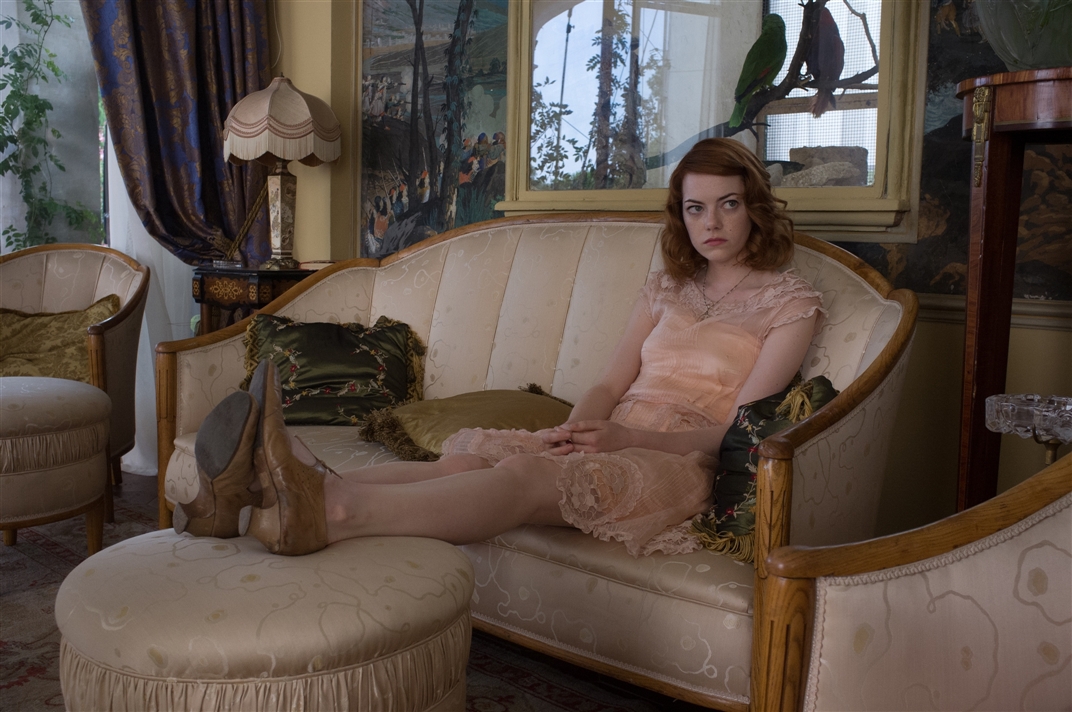 Howard and Stanley travel to the French Riviera, but Stanley is soon astonished by Sophie’s ability to go into a fugue state and apparently pull out highly personal details about him and his family. Stanley witnesses a seance in which Sophie communicates with the deceased patriarch of the American family. A candle floats up from the table and Howard grabs it to try to discern what trickery is at play, but is astounded to find no apparent subterfuge. Stanley begins spending time with Sophie. He takes her to visit his aunt and they drive a convertible along the picturesque rocky corniches.When Stanley and Sophie visit his aunt Vanessa (Eileen Atkins), Sophie is seemingly able, after holding aunt Vanessa’s pearls, to somehow relate secret details of Vanessa’s one great love affair. This finally convinces Stanley of Sophie’s authenticity and he has an emotional epiphany, feeling that his lifelong rationalism and cynicism have been misguided. When caught in a rain storm, they end up at an observatory that Stanley had visited as a child. After the rain subsides, they open the roof up and view the stars.At a Gatsby-esque party, Stanley and Sophie dance. As they walk together later that night, Sophie asks him if he has felt any feelings for her “as a woman”. Stanley, who has admired her talents as a mystic and is grateful to her for opening his eyes to a new worldview, is taken aback and admits that he has not thought of her that way. She leaves upset. The next day Stanley holds a press conference to tell the world that he, who spent his life debunking charlatan mystics, has finally come to find one who is the real deal. The reporters drill him with questions, but the grilling is interrupted when he receives news his aunt Vanessa has been in a car accident. Stanley rushes to the hospital, and in an emotional scene in a waiting room considers turning to prayer for solace. That is, if he now has come to believe in divination and mysticism, perhaps he should believe in God and prayer. He begins to pray for a miracle to save his aunt, but is unable to go through with it. The rationality that has been his whole life comes back and he rejects prayer, the supernatural and by extension, Sophie and her powers. He decides once more to prove she is a fraud.Using a trick seen earlier in his stage act, Stanley appears to leave the room but stays to overhear Sophie and Howard discuss their collusion in what has been an elaborate ruse. He discovers that Sophie was able to know so much about him and his aunt because she and Howard collaborated to fool Stanley. Sophie was indeed a charlatan tricking the rich American family and was quickly discovered by Howard. Rather than unmask her and stop the ruse, he enlisted Sophie to help him one-up his best friend and rival, Stanley.Stanley is initially angry at Howard and Sophie but decides to forgive them. In a conversation with his aunt Vanessa, who has recovered from her car accident, Stanley admits and fully realizes that he is in love with Sophie. He finds her and asks her not to marry Brice, but marry him instead. Sophie is taken aback and finds his haughty, awkward proposal unsuitable. She tells him she still plans to marry the wealthy Brice. Returning dejected to his aunt Vanessa’s, Stanley further admits that he fell in love with Sophie at first sight, and, saddened, is then surprised when Sophie, who had arrived before him, knocks a spirit knock. He proposes, she accepts with a spirit knock, and they kiss as the film ends.Not a classic Woody Allen but a very pleasant and lightly humorous film that older audiences in particular will enjoy. 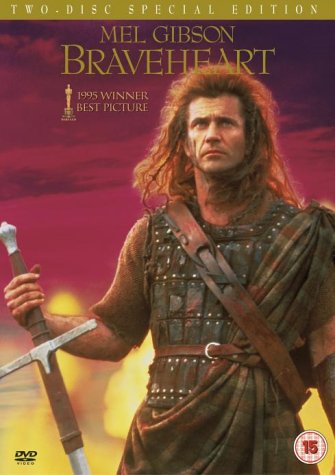 In 1280, King Edward “Longshanks” invades and conquers Scotland following the death of Alexander III of Scotland, who left no heir to the throne. Young William Wallace witnesses Longshanks’ treachery, survives the deaths of his father and brother, and is taken abroad on a pilgrimage throughout Europe by his paternal Uncle Argyle, where he is educated. Years later, Longshanks grants his noblemen land and privileges in Scotland, including Prima Nocte. Meanwhile, a grown Wallace returns to Scotland and falls in love with his childhood friend Murron MacClannough, and the two marry in secret. Wallace rescues Murron from being raped by English soldiers, but as she fights off their second attempt, Murron is captured and publicly executed. In retribution, Wallace leads his clan to slaughter the English garrison in his hometown and send the occupying garrison at Lanark back to England.Longshanks orders his son Prince Edward to stop Wallace by any means necessary. Wallace rebels against the English, and as his legend spreads, hundreds of Scots from the surrounding clans join him. Wallace leads his army to victory at the Battle of Stirling Bridge and then destroys the city of York, killing Longshanks’ nephew and sending his severed head to the king. Wallace seeks the assistance of Robert the Bruce, the son of nobleman Robert the Elder and a contender for the Scottish crown. Robert is dominated by his father, who wishes to secure the throne for his son by submitting to the English. Worried by the threat of the rebellion, Longshanks sends his son’s wife Isabella of France to try to negotiate with Wallace. After meeting him in person, Isabella becomes enamored of Wallace.Warned of the coming invasion by Isabella, Wallace implores the Scottish nobility to take immediate action to counter the threat and take back the country. Leading the English army himself, Longshanks confronts the Scots at Falkirk where noblemen Lochlan and Mornay, having been bribed by Longshanks, betray Wallace, causing the Scots to lose the battle. As Wallace charges toward the departing Longshanks on horseback, he is intercepted by one of the king’s lancers, who turns out to be Robert the Bruce. Remorseful, he gets Wallace to safety before the English can capture him. Wallace kills Lochlan and Mornay for their betrayal, and wages a guerrilla war against the English for the next seven years, assisted by Isabella, with whom he eventually has an affair. Robert sets up a meeting with Wallace in Edinburgh, but Robert’s father has conspired with other nobles to capture and hand over Wallace to the English. Learning of his treachery, Robert disowns his father. Isabella exacts revenge on the now terminally ill Longshanks by telling him she is pregnant with Wallace’s child.In London, Wallace is brought before an English magistrate, tried for high treason, and condemned to public torture and beheading. Even whilst being hanged, drawn and quartered, Wallace refuses to submit to the king. As cries for mercy come from the watching crowd deeply moved by the Scotsman’s valor, the magistrate offers him one final chance, asking him only to utter the word, “Mercy,” and be granted a quick death. Wallace instead shouts, “Freedom!”, and the judge orders his death. Moments before being decapitated, Wallace sees a vision of Murron in the crowd, smiling at him.In 1314, Robert, now Scotland’s king, leads a Scottish army before a ceremonial line of English troops on the fields of Bannockburn, where he is to formally accept English rule. As he begins to ride toward the English, he stops and invokes Wallace’s memory, imploring his men to fight with him as they did with Wallace. Robert then leads his army into battle against the stunned English, winning the Scots their freedom.The historical content may have been distorted, but even though, this movie is meant for entertainment. It is not a history lesson caught on video.The acting is absolutely superb, this movie is guaranteed to have you on the edge of your seat for the entire three hours