With Planet Hulk, an adaptation of the like-titled comic book series, the studio delivers an above-average hit — a movie that doesn’t shy away from the fact that it’s basically Ridley Scott’s Gladiator, with Bruce Banner’s gamma-irradiated alter ego stepping in for Maximus.

For comics fans seeking a pleasant distraction or looking for something to tide them over until the next live-action Hulk movie arrives, one could do worse than watching this gory, action-packed Marvel story.When Iron Man and Reed Richards deem Hulk too dangerous to remain on Earth, he is exiled into space and set on a course for an uninhabited planet. But our heroes never cleared that destination with the green guy, so he goes all smashy in mid-flight and ends up crash landing on the planet Sakaar. Here, Hulk is taken as a slave and forced to pla in the evil Red King’s gladiator arena. At first, all Hulk wants to do is pummel, brood and repeat, but then he joins forces with his fellow slaves in an attempt to take back the planet from Red King’s tyranny. 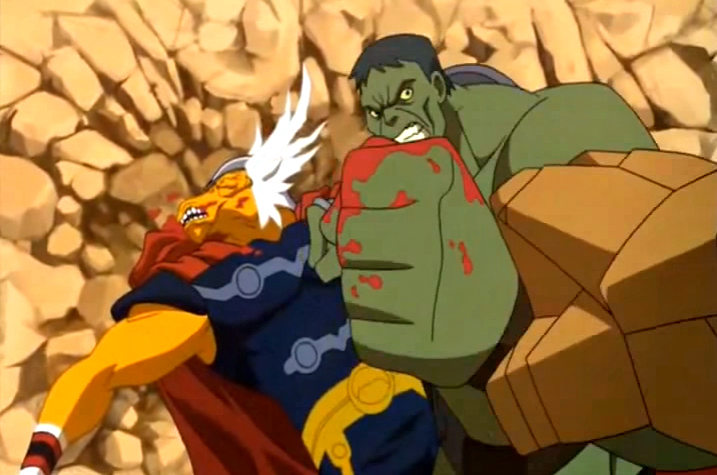 Despite an obvious need for a bigger budget to fully realize the scale of the battles, Hulk manages to streamline the source material into a fast-moving 80 minutes that taps the necessary action beats to satisfy the Hall H attendee in all of us. Those looking for serious pathos will be disappointed, but that’s not to say that Greg Johnson’s screenplay is void of any character drama. Two of Hulk’s fellow slaves are provided decent flashbacks that add some depth to their otherwise 2D characters, but the script’s “telling tales around the campfire” approach to these flashbacks grows a bit redundant. Still, these character touches make us care more about Hulk’s fight to save a world, and maybe find peace, once the dust settles.

Fans of the comic will be glad to see that most of the original storyline and brawls are intact. One of the biggest changes from the comic has to be (spoilers) swapping out Silver Surfer for Beta Ray Bill as an opponent during a key fight. The swap, dictated mostly by the fact that 20th Century Fox has rights to the character, works well onscreen, and Hulk seems better matched to fight Bill than he did Galactus’ herald.For the most part, the core of the original story remains intact, which leads to a third act that feels separate from the main arc, but nonetheless entertaining. It’s Hulk vs. an invasion by the Spikes, which turn everyone into zombie porcupines. The climax provides us with the movie’s darkest beat, where a character carries a smoldering child who turns to ash, following the aftermath of a nuclear attack. The movie retains this darker edge leading to the final showdown between Hulk and the Red King, which feels a bit rushed.Planet Hulk is a great movie that provides several graphic “Hulk Smash!” moments without forgetting to link them to some semblance of characters that we care about. It’s not a perfect movie to be sure, but it certainly qualifies as one of Marvel’s better efforts in the direct-to-DVD realm.