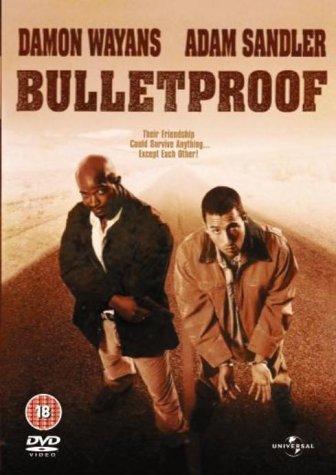 Archie Moses (Adam Sandler) is a small-time crook and a thief who lives in Los Angeles, before he is working for a local drug lord named Frank Colton (James Caan). He is unaware that his best friend Rock Keats (Damon Wayans) is actually an LAPD undercover cop, with a real name being Jack Carter, who is seeking evidence against Colton, and he befriended Moses only to infiltrate Colton’s gang members.One night, Jack goes out with Moses and gets him drunk, and manages to get info from Moses, and he finds an address for one of Colton’s fronts. During a raid on Colton’s warehouse, but Archie realizes that Jack is an LAPD cop, and he tries to escape the warehouse during the police raid, during which an out of control crane hits Moses in the back and he accidentally shoots Jack in the head. Jack miraculously survives and makes a full recovery with the aid of his physical therapist Dr. Traci Flynn (Kristen Wilson). Moses then flees the state, and is subsequently found and arrested later on. Moses is brought into custody, and he agrees to testify against Colton, but the trial is at the other side of the country. After Jack’s recovery, his superior officer Will Jensen (James Farentino) orders him to get Moses to transfer him personally to the courtroom.Having been bitter about the accident, Carter harbors resentment against Moses, and problems escalate since a simple transfer has gone awry when Colton learns through bribed federal agents and Los Angeles Police Department officers of Moses’s attempt to testify against Colton. Carter and Moses slowly mend their friendship and are successful in returning to their local police department. However, Colton apparently holds Flynn hostage, and blackmails Carter into turning Moses over in order to save Flynn. However, Carter and Moses pretend to comply with Colton and shoot their way through Colton’s guards. It is later revealed that Flynn was responsible for leaking Carter’s and Moses’ whereabouts to Colton and was actually on Colton’s payroll. Carter manages to distract Colton after Moses gets shot in the shoulder by Colton and after apprehending Flynn and Moses manages to kill Colton. However, Moses gives the incriminating documents on Colton to Carter, and he heads to Mexico, where he becomes a bullfighter, with Carter and Moses’ mother later accompanying him.Bulletproof is one of those movies that the critics are obviously going to give a blow and thumbs down, but in reality, I really had a good time watching Damon Wayans and Adam Sandler dodging bullets, cussing each other out, just basically getting on each others nerves.  A decent film to pass the time.