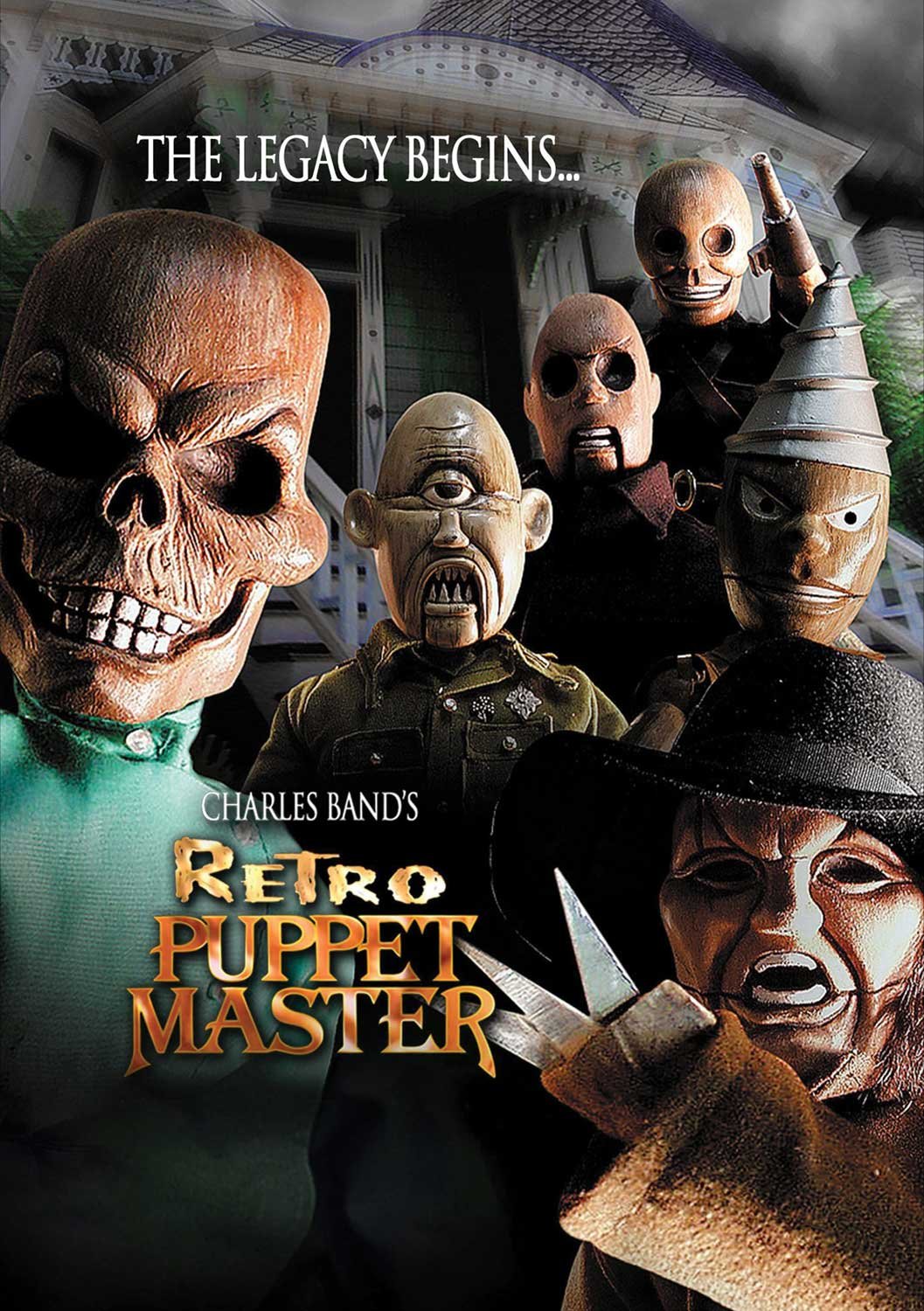 The film begins in 1944, Switzerland, taking place after the events of Puppet Master III: Toulon’s Revenge. Toulon and his little friends are still on the run, and decide to hide in the Kolewige, an inn 4 miles from the Swiss border. Blade finds the wooden head of an old puppet named Cyclops in their trunk, and when Toulon sees it, he then tells his puppets the adventures with the woman he loves, and his retro puppets, starting in Cairo, Egypt, in 1902.

A 3,000-year-old Egyptian sorcerer, named Afzel, has stolen the secret of life, and is fleeing the servants of an evil Egyptian god, named Sutekh. Two servants, imbued with magical power from Sutekh, attack him, but are killed easily by Afzel and his own magical power. After dispatching the two servants he begins his journey to Paris. Meanwhile, Sutekh has given life to three of his oldest servants—Egyptian mummies. After they rise from their chamber they too begin to pursue Afzel. Cut to Paris, where a young André Toulon is putting on a puppet show of Dante’s Divine Comedy. Watching from the crowd is Elsa, who has left her cold-hearted abusive ambassador father and harmless mother to view the wonders of the country and has decided to see the play. In the sewers nearby the three mummies have hired two thugs to kill Afzel. The thugs are necessary since Afzel has the power to sense the coming of the mummies.

Afzel is beaten brutally until Elsa, leaving the theater, sees them and cries for help. The thugs then scatter, leaving Toulon and Elsa to pick Afzel up and bring him inside. Later, when he stirs from his sleep, he talks with Toulon and reveals that he knows the secret of life, and it’s the only thing that can protect humankind when the elder gods rise up in 100-1,000 years, and needs to pass it on to Toulon. Toulon is skeptical until Afzel begins to make the puppets move. Now Toulon realizes he is genuine and begins to learn his powers. Then Afzel starts to make the puppets draw a barrier that’s supposed to protect him if the servants come back.

While stepping outside for a brief moment, Toulon begins to talk to a beggar who has sat on the steps since the beginning of the movie. However, he is dead, and when Andre becomes aware of this he begins to mourn. Afzel tells him to bring him inside to teach him the true secret of life. After bringing him inside they use a ring to transfer the soul of the beggar to the puppet, “Pinhead”. The puppet starts to move but, after a few questions the puppet runs away into the theater. Later on, Elsa returns to talk to Toulon, until her father’s rude servants come by, and they take Elsa and Toulon back to her house, and after Toulon talks to the father, he gets knocked out, and is then thrown into the woods.

The next day, back at the theater, Valentin storms in as the barrier written on paper falls off the wall. The three mummies see their chance to attack and begin their rampage through the theater. Valentin finishes repairing the door as two of the mummies break in and kill him. Vigo runs backstage to Duval and Latour and falls dead. Duval stabs the lead mummy in his hand as the mummy kills him with his other hand. Latuor gets out a gun and shoots the lead mummy three times as the other mummy comes in through the back door and all three of them use their magic to kill him. Afzel appears and says Sutekh shall not claim his life, and kills himself with his own magic. Satisfied with victory, the mummies begin to leave. Once Toulon returns from the woods, he sees what has happened and acts quickly by putting their souls inside his puppets. The men return, having sensed someone with the knowledge of the secret of life, and try to kill Toulon. His puppets, however, kill one of the mummies with Six-Shooter by shooting the chandelier chains, causing it to crush the servant. The two henchmen retreat in order to plot the capture of Elsa to lure Toulon into a trap.

Feeling that he had won the battle, André and his puppets go to a train station to leave Paris to Kara, Togo before things start to get bad, not realizing they had already begun. The servants killed her parents, the guards and capture Elsa, and then send a dream to Toulon that shows Elsa tied up, and a train. Knowing the meaning, he quickly changes trains to Merca, Somalia and gets his puppets ready for the showdown. When the train leaves, André looks around, having released his puppets and letting them follow him throughout the train, until finally coming to the last car and finding Elsa tied up like in his dream. The two men appear and ask for the secret of life. André displays the scroll where the secret is written and asks, “How do you know I haven’t copied it?” to which the leader states he did not have enough time to do so, but still is doubtful he hadn’t. André, noticing he is distracted, attacks the leader while his puppets attack the other. A large struggle breaks out, and the other henchman is killed with the final leader of the three being thrown from the car. Freeing Elsa, the group rides away in the train, beginning their adventure. After telling the story, the puppets wonder what happened to the other puppets. Andre tells them that’s another story, which he will tell them in the future.

Greg Sestero brought a lot of charisma to the role of Andre Toulon. And though the cinematography was not excellent, and there was minimal violence and gore, this film was a lot of fun. I am a big Puppet Master fan and have grown to expect blood and gore from the films of this series, but I can say that I was never bored through the entire course of watching Retro Puppet Master.

A heart attack moves a Pulitzer winning journalist to leave NY for the peace of a small New England town, but he soon finds himself pulled into a case of a man accused of killing his gay lover with the blade of a shovel. Wanting to keep the case quiet, the town turns against the journalist and his family when he begins digging into its secrets, until finally the accused man is found hanging in his cell and the truth comes out about more than just the killing.

I’d recommend seeing “Skeletons” because it is a mystery, but unfortunately the mystery doesn’t last long enough and when the “twist” comes, we’ve already figured it out.

In order to get a sizable inheritance, Denis Leary is understated but hilarious as Doug, who must suffer the indignities associated with apologizing all of the women he has betrayed. Elizabeth Hurley, with her impeccably straight laced English accent is perfect as Anna, a rigid, nearly always thoroughly offended lawyer charged with chaperoning him on this perilous journey in what is sure to be the road trip from hell.

The first woman is a crazy cat lady – a wise choice to try to justify why he left her. Never mind that she may have become that way because he dumped her. The next woman is a sex maniac, so one wonders why he would dump that kind of chic. It would have made more sense to keep this one around kicks. Who knows, maybe she was too much for the old boy.  Christine is a militant African American mayor who publicly flogs Doug while he stands in her campaign headquarters. While she clearly used him as an experiment designed to see what would happen if she dated a white man, she is clearly still bitter about the situation. With good measure, she refuses to accept his apology. Anna insists he go back to renegotiate by admitting to disgusting things about himself as she feeds him the words to grovel for forgiveness. She relents. On to his next victim. Angel is a model who embarrasses him because she doesn’t remember their rendezvous. Then she drags him off to a private room while the director says tells the crew to take 5. Only Doug is unable to perform, despite trying to fake it. Again, Anna must listen to them trying to have sex as she waits by the car, but doesn’t laugh enough to make the scene funnier. Instead, she modestly cups her hand over her face as if she is discovering something she shouldn’t know about.

Emma’s picture looks decidedly normal and sweet. She has a daughter and you can pretty well guess what this means. The girl says her mother died and that she does not have a dad. He could be her father, but the kid’s granny sends him away. Anna shows some compassion and says she won’t count that one. He finds Erica at a strip joint but she is now a transsexual living as Eric. Then she busts a move using all her stripper guile. She became a man because she was sick of being a doormat. Then she whips out her junk. She says he was the first person she had oral sex with and that he’d told her not to worry that she would get the hang of it. When she finds out he stands to get an inheritance she demands that he perform oral sex on her new manhood. Anna comes to the rescue, just as Eric is beating the crap out of him. So this is the second time that she shows him compassion. We are well on our way to their mating ritual.

Will Sasso is hilarious as white trash trailer park Willy, the sister of the equally hilarious Alex Borstein (both Mad TV alum) who plays Doris. Of course, at least one of the babes he boned must have gotten fat — so she has blown up like a puffer fish on steroids. Doris relates her tale of woe, telling him how he’d promised to marry her. He admits to being a cad during their high school years. No doubt, he probably deflowered her, too. Maybe there was a reference I missed. She asks for a kiss and then promptly jumps him in anger. I was expecting her to try to put the moves on him, because hot guys always seem to think that all fat chicks want them, despite what a douche they may be. So I was glad to see that instead, she throws him out and refuses to forgive him.  He can’t get the little girl he thinks he fathered out of his head and returns to talk to granny. He finds out Emma fell for him, but when she realized she was pregnant, she knew Doug was an ass and didn’t want him raising her kid.Anna finds him weeping in his hotel room, consoles him and says he’ll get his million dollars. She says she is not actually married. You know the rest. Then POW! Anna is actually one of his victims! So she concocted the whole scheme up … there is no inheritance! She’s getting revenge for how he treated her when she was a mousy, bespectacled college student. course, he reunites with the daughter he never had. They run into each other and it is revealed that Anna perhaps regrets what he did to Doug to pay him back for breaking her heart. He turns to glance at her and we are supposed to know that eventually, they get together..

Stay for the out takes. They are worth it! All in all a funny film.