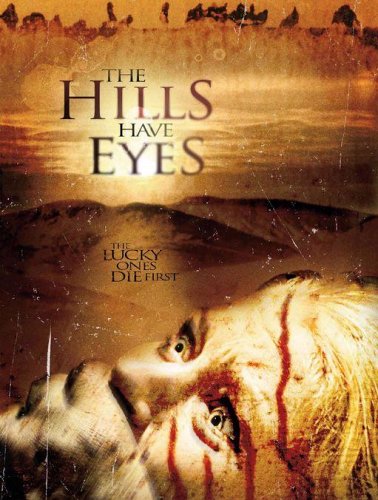 A group of scientists are killed by a mutant named Pluto (Michael Bailey Smith). Later, Bob Carter (Ted Levine) and his wife, Ethel Carter (Kathleen Quinlan) are traveling from Cleveland, Ohio to San Diego, California for their silver anniversary. With them are their teenage children Bobby (Dan Byrd), and Brenda (Emilie de Ravin), eldest daughter Lynn (Vinessa Shaw), Lynn’s husband Doug Bukowski (Aaron Stanford), their baby daughter Catherine (Maisie Camilleri Preziosi), and their German Shepherds, Beauty and Beast. In the New Mexico desert, they meet a gas station attendant named Jeb (Tom Bower), who tells them of a short-cut through the hills. After taking the supposed short-cut, their tires are punctured by a hidden spike strip. Doug and Bob go look for help, while the rest of the family stays behind.

Bobby chases a panicked Beauty into the hills and finds her mutilated body; frightened, he runs and accidentally falls, knocking himself unconscious. A young female mutant named Ruby (Laura Ortiz) finds him and protects him from her brother Goggle (Ezra Buzzington). Bob goes back to the gas station for help, and upon investigation finds news clippings detailing various disappearances that have occurred in the area. He realizes the attendant purposefully led them to danger by suggesting they take an alternative route through the hills. When Bob exits he finds the hysterical Jeb, who commits suicide in front of him. In fear, Bob attempts to flee, but is attacked by the mutant leader, Papa Jupiter (Billy Drago), and dragged into the mining caves by Jupiter, Jupiter’s eldest son Lizard (Robert Joy), and Pluto. Bobby returns to the trailer, but doesn’t mention Beauty’s death not wanting to frighten the rest of the family. Later that night, the family is awakened by Bob’s screams, and they all rush from the trailer, except for Brenda and the baby, who are left behind. Outside they find Bob being burned alive on a stake and frantically try to save him, but to no avail. Meanwhile, Pluto and Lizard use the distraction to ransack the trailer, where Lizard beats and rapes Brenda. When Lynn returns to the trailer she is greeted by Lizard and Pluto, and forced to let Lizard drink from her breasts while her baby is held at gunpoint. When Ethel returns she is shot by Lizard, and Lynn stabs Lizard in the leg, prompting Lizard to shoot Lynn in the head. Lizard and Pluto flee with the baby after Lizard attempts to shoot Brenda.

Doug and Bobby return to the trailer and discover Lynn and Ethel, who die shortly afterward. Goggle, who is watching the Carters with a pair of binoculars, is attacked by Beast, who tears his throat out, killing him. The next morning, Doug and Beast set off to rescue Catherine. Doug finds an abandoned nuclear testing village, and is knocked unconscious by Big Mama (Ivana Turchetto) during his search. Upon awakening, he escapes an ice box filled with human body parts and continues his search, only to encounter Big Brain (Desmond Askew). After Big Brain tells him the mutants’ origins, Doug is attacked by Pluto, who severs two of his fingers with an axe. Pluto almost kills Doug, but Doug manages to gain the upper hand while Pluto is distracted, and kills him with his own axe. Outside, Doug kills the mutant Cyst (Gregory Nicotero) and continues to search for Catherine. After ordering Lizard to kill Catherine, Big Brain is mauled to death by Beast. Lizard takes a cleaver and prepares to kill Catherine, but finds that Ruby has taken her. Doug sees Ruby running through the hills with Catherine and follows her. At the trailer, Brenda and Bobby prepare an explosive trap, which destroys the trailer, apparently killing Papa Jupiter.

Doug catches up with Ruby, but before she can return Catherine, Lizard attacks him. Lizard and Doug fight, and Lizard is presumed dead. When Doug turns his back Lizard aims a shotgun at him, but Ruby tackles Lizard off a cliff, killing them both. Bobby and Brenda find that Papa Jupiter managed to survive their trap, and Brenda finishes him off. They are then reunited with Doug, Catherine and Beast. As they celebrate their apparent victory, an unknown mutant watches them through binoculars from the hills. 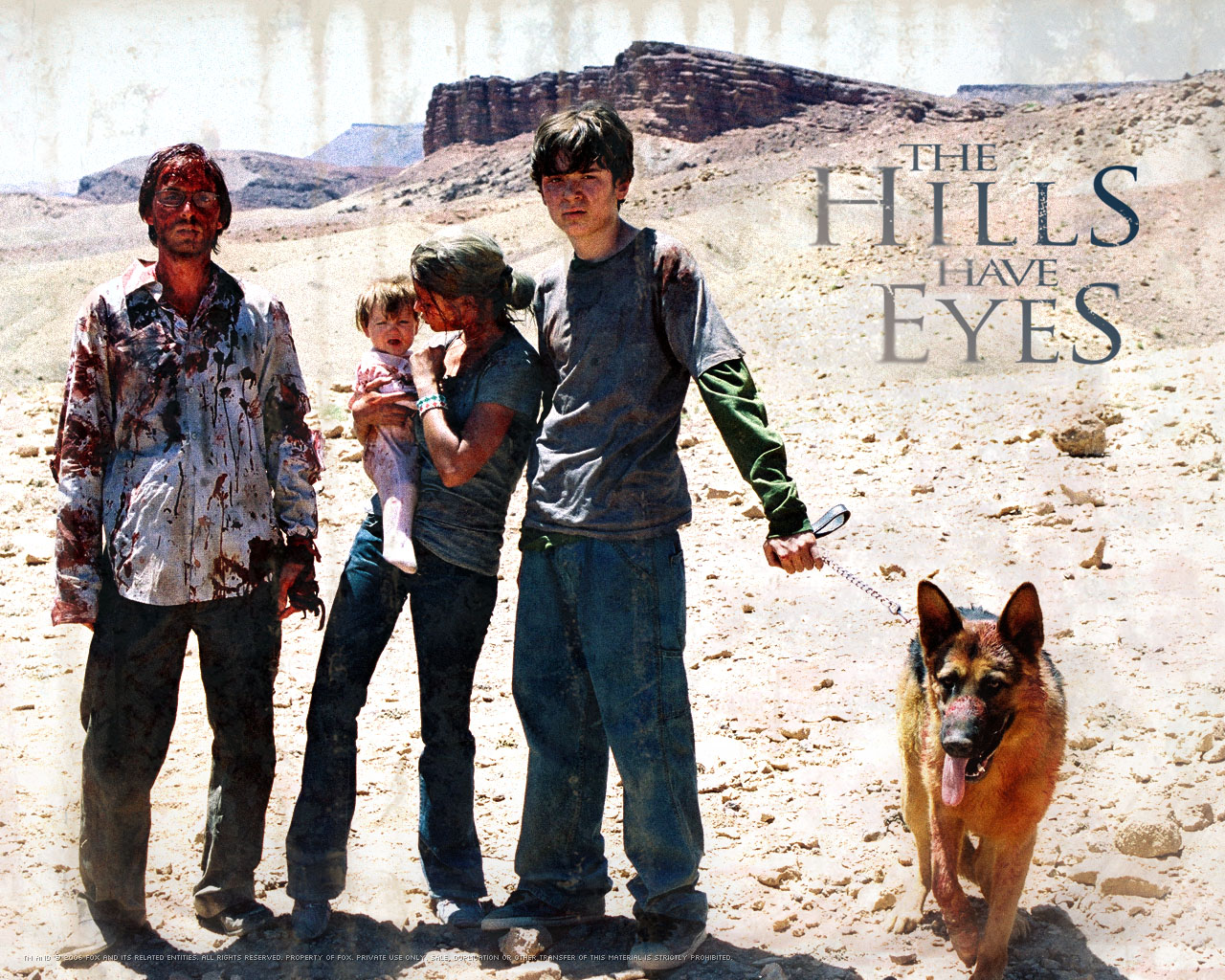 Very much following the marker set by Craven’s original, is actually what stops this from truly breaking the mould. It lacks freshness to go with it’s willingness to set bloody parameters. But, and it’s a good but, this is still one fine and squeamish little ride, one that lingers even after you watched the film.

We open with two greedy gravediggers who get sliced up by an unseen presence before delving into the 5-minute credits sequence. Then we witness a tipped-over van, out of which fall a collection of slimy convicts and one extra-jiggly female guard. The group promptly decides to wander off into a surprisingly verdant desert wasteland, whereupon they come across a mumbling Danny Trejo. Vulgarities are exchanged, and then the convict crew (and busty broad) wanders off into the desert again, only to arrive at an authentic-style Old West town, complete with booze, whores, and  a bunch of lame-looking zombies who pop out once the sun goes down.

And then it’s just a bunch of aimless meandering and tons of insipid dialogue before the flick winds down with an amusingly inept finale. A movie that wanted to be a From Dusk Till Dawn-style genre stew is, instead, a painfully inert, agressively silly, and absolutely dreary concoction. It’s a dumb story populated by obnoxious characters who do moronic things. Often.

First-time director Nick Quested makes all sorts of embarrassing mistakes: He allows his annoyingly incongruous rock & rap tunes to simply blare over the dialogue, the lighting on the flick is consistently insufficient, and there’s way too many redundant (not to mention pointless) fade-ins, fade-overs, and stutter-step editing gimmicks. And don’t even get me started on the horrific screenplay.

B-movie fanatics will no doubt see a cast list that includes Cerina Vincent, Danny Trejo, Martin Kove, and Billy Drago, and get a few charitable thoughts in their head. Ignore those feelings and simply rent something else. Trust me. Cerina Vincent was the only reason I bought this, being a fan of hers ever since her Lost Galaxy days.

Tim and Allie’s car breaks down and they attempt to find shelter in a remote desert farmhouse after becoming lost. A strange Charles Manson-like character, Preacher (Billy Drago), allows them inside to use the phone. The couple find out they won’t be able to get tow service until the following day. Preacher and his Ukrainian wife Oksana let them stay the night with strict orders to be gone by morning, and not wander “where you are not invited.” They find their hosts weird but don’t think much of it and head to bed after dinner. Allie wanders off in the middle of the night after using the outhouse, and discovers the garage has been converted into a cult worshipping church. She then stumbles upon a crumbling outbuilding where she hears faint cries coming from a child. 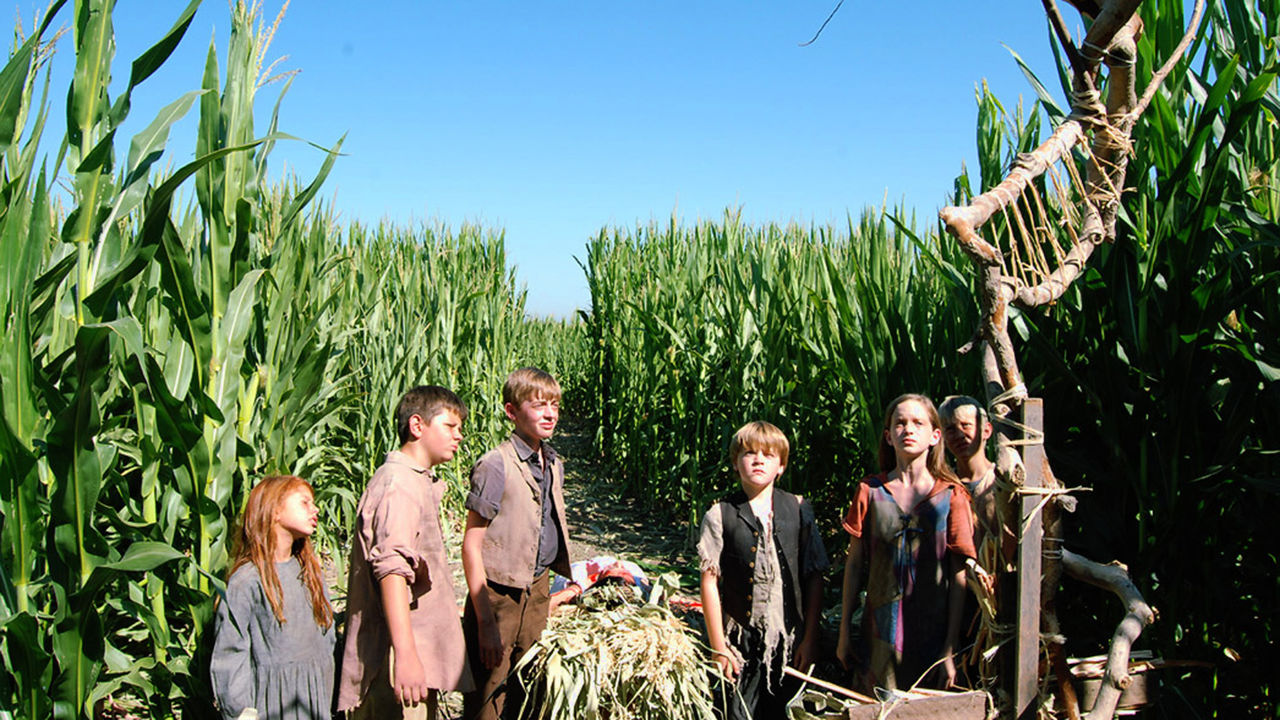 Allie runs back and tells Tim what she witnessed, but at first he doesn’t believe her. He agrees to confront the Preacher about the voices, but falls into a hypnotized trance while viewing digital photos in Preacher’s camera. The child then walks into the house and plants a seed inside Allie and disappears before being seen. Tim and Allie try to leave the house, but get locked in the house by a supernatural force. Allie calls the police, but is unsure if she got through as the line gets cut off halfway. Allie falls asleep and dreams about being murdered by children in a cornfield. Allie and Tim wake up to headlights flashing into the room and a cop arrives to check on the house but is thrown into the air and killed by the supernatural force. After witnessing this Tim insists on answers from the Preacher, finding out that the supernatural force needs children to survive and has already planted a seed inside Allie.

Come morning, a parcel delivery driver drops things off at the house. He agrees to give Tim and Allie a ride into town. Tim has a bad feeling about the driver so he takes off with Allie in the abandoned police vehicle instead. They get to the main road. The child in the outbuilding then kills Oksana and psychokinetically causes Tim and Allie to have a car accident, in which Tim dies. The parcel driver approaches the accident and brings Allie back to the farmhouse where a group of children and their mothers greet her. In a trance, she sits next to the little child in the outbuilding and begins to sing to him. The child is then seen playing with a doll, then drops it on the floor, which causes the cop’s corpse to fall from the sky onto the ground.

This actually turned out to be An Excellent entry in a series that I thought had run it’s course,but this is very well directed and acted with some good creepy moments