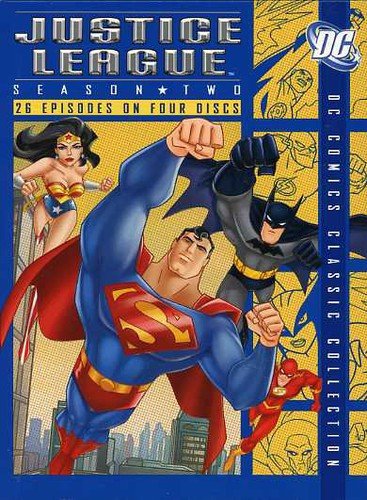 Now this is more like it. Justice League’s second season takes all of the wrinkles found in the first year and smoothes them over. The action is bigger, the stories are more exciting, and Batman’s rating on the cool-o-meter reaches new highs – exactly how things should be. The result is a boxed set that offers perhaps the finest collection of superhero animation that your hard-earned dollars can buy. They don’t come any better then this, kids.

Much like the comic book universe from which these characters came, the Warner Bros. superhero shows headed by Bruce Timm and friends (Batman: The Animated Series, Superman: The Animated Series and Batman Beyond) have created a continuity and universe all their own. Justice League is the latest (and, sadly, final) entry in this cartoon universe and it takes all of the best stuff from what has come before it and combines it into a near-perfect superhero animated series. While the first season was light on character development and solid storytelling, the second season gets the balance of action, story, and character just right. Again we’ve got great supporting characters and villains from the DC universe; Darkseid, John Dee, Despero, and even Doomsday all make appearances.

The action is also a lot more exciting, with more imagination having gone into the writing of the fights. Furthermore, this season we’ve got some great CG effects (used for vehicles and ships) – the air dogfight in Maid of Honor between the Batwing and some jetfighters is especially cool to watch.  Another standout this season is the music. The series composers (Lolita Ritmanis, Michael McCuistion, and Kristopher Carter) have created some amazing stuff here. In each episode you’ll find several musical cues that will really get your attention and at least one that will tug at the ol’ heartstrings. The music knows when to fade into the background and let the images do the work and when to take centre stage. With stuff this good you want the music to take centre stage as much as possible. There is a Princess Mononoke-esque “nature endures” moment in Hearts and Minds where the score was just wonderful. The music in these episodes is too good for a cartoon TV show.

So the action is awesome, Superman is fixed, and the music is one-of-a-kind. All that’s left is the writing… and it’s the best part. The writing here is really great, with story and character always being the focus of each episode. A Better World answers a simple question in an interesting way: what if Superman crossed the line? In an alternate universe, Superman realizes that Luthor really is an unredeemable villain and he kills him. We see that the murder – even the murder of a monster like Luthor – changes both Superman and the League. They become Big Brother-like sentries of the planet. When a cross-dimensional rift is opened, this “darker” league (known as the Justice Lords) has a showdown with our untainted heroes. The episode brings up some very interesting questions and is a blast to watch.

We’ve also got some fantastic variety. The Paul Dini-penned Comfort and Joy is a very touching Christmas episode, while Hereafter transports Superman to a Planet of the Apes-ish future where he is the planet’s sole survivor (he even grows a Robinson Crusoe beard and fashions himself a jungle-machete!). The Terror Beyond makes for a very fun H.P. Lovecraft-inspired romp which sees Solomon Grundy fighting his way into the brain of the massive Ichthulhu (voiced by Rob Zombie) and wrestling a nightmare creature inside this thing’s head. Very bizarre, but very cool. Finally there’s the three-part season finale, Starcrossed. This is a balls-to-the-wall action spectacular which culminates in Batman piloting the League’s watchtower into the planet, while Green Lantern and Hawkgirl’s relationship is torn to shreds.

This is a fantastic collection of episodes, to be sure, but there are still a few nitpicks that keep the set from getting a perfect score. For one, while Superman is tougher, much of the new attitude doesn’t feel genuine – it seems that they wanted to make him “cooler” so they made him more badass. Problem is, Superman isn’t a badass character. Second, there are a few episodes (Maid of Honor and Eclipsed) that feel somewhat stale, and one episode, Wild Cards, that, sadly, let its driving gag get the better of the story. On TV you’ll find many cartoons, but you’ll only find one Justice League – its second season is a shining example of superhero animation done right in virtually every respect. Most importantly, the show’s creators have crafted a series that respects the intelligence, attention-span, and maturity of its audience. This isn’t just a kids show nor is it just a television show. It’s Justice League – and it’s great.