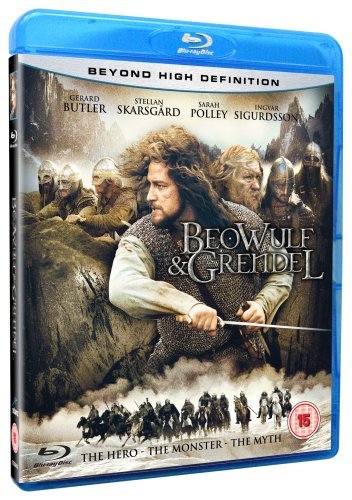 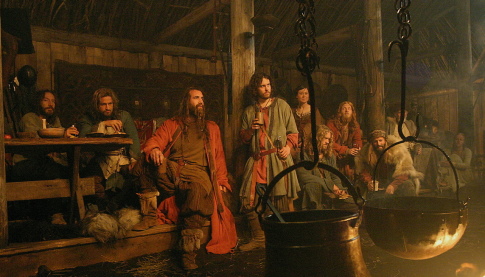 In 500 A.D., Hrothgar, king of Denmark, and a group of warriors chase a large and burly man, whom they consider a troll, and his young son, who already bears cheek and chin whiskers, to the edge of a steep seaside cliff. The father directs his young son, Grendel, to hide from the attackers’ view; whereupon The Danes shoot the father dead, and his dead body plunges onto the beach far below. The Danish king sees the young Grendel, but spares him. Later, Grendel finds his father’s body and cuts the head off to take it home. Many years later, the severed (and mummified) head is inside a cave where the boy Grendel has become as large and powerful as his father, and plans revenge. 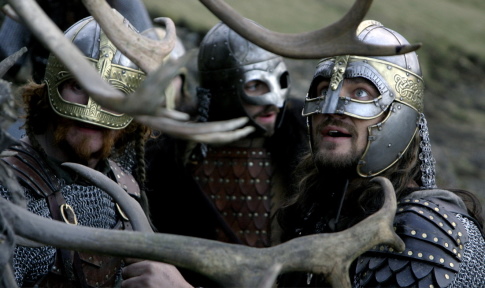 When Hrothgar finds twenty of his warriors killed inside his great hall, the Danish king falls into a depression. Beowulf, with the permission of Hygelac, king of Geatland, sails to Denmark with thirteen Geats to slay Grendel for Hrothgar. The arrival of Beowulf and his warriors is welcomed by Hrothgar, but the king’s village has fallen into a deep despair and many of the pagan villagers convert to Christianity at the urging of an Irish monk. While Grendel does raid Hrothgar’s village during the night, he flees rather than fight. Selma the witch tells Beowulf that Grendel will not fight him because Beowulf has committed no wrong against him. 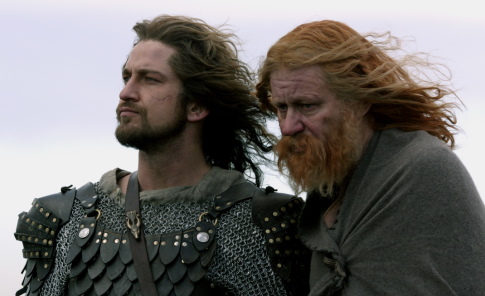 A villager, recently baptized and thus now unafraid of death, leads Beowulf and his men to the cliff above Grendel’s cave. When the villager is found dead, Beowulf and his men return with a rope and gain entry to Grendel’s secret cave, where one of Beowulf’s men mutilates the mummified head of Grendel’s father. That night, Grendel invades Hrothgar’s great hall, kills the Geat who desecrated his father’s head, and leaps from the second story, but is caught in a trap by Beowulf. Grendel, refusing capture, escapes by severing his captive arm, and dies near the site of his father’s death, where his body is claimed by a mysterious webbed hand. Thereafter Hrothgar admits to Beowulf that he had killed Grendel’s father for stealing a fish but had spared the child Grendel out of pity. Grendel’s severed arm is kept by the Danes as a trophy. In revealing more about Grendel, Selma recounts that Grendel had once clumsily raped her and has protected her since that day; and Beowulf becomes her paramour. 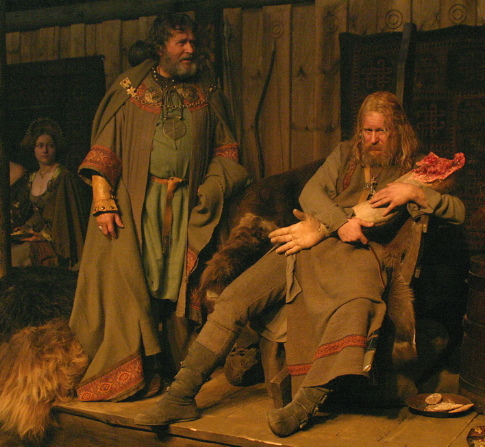 The Danes are later attacked by Grendel’s mother, the Sea Hag; and Beowulf slays her with a sword from among her treasure, and then notices that the battle was being observed by child of Grendel and Selma. Later Beowulf, with Grendel’s son watching, buries Grendel with ceremony. Shortly thereafter, Beowulf and his band of Geats leave Denmark by ship, having warned Selma that she must hide her son, lest the Danes destroy him. 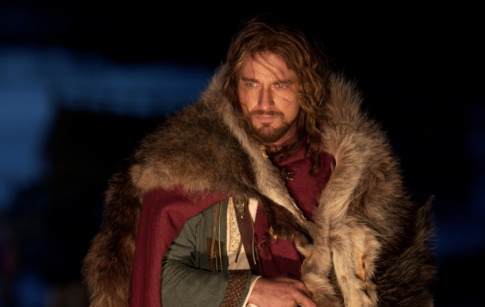 This is a very updated version of the Anglo-Saxon poem “Beowulf,” using contemporary English.This movie still has the mythical, epic qualities of the poem that have inspired readers throughout the ages. In an excellent performance, Gerard Butler effectively captures the conflicted hero Beowulf as he endures the slow erosion of his military code of conduct. Beowulf & Grendel is more than a story of blood and war. Themes of vengeance, loyalty and mercy are powerfully entwined with the beginnings of Christianity in southwest Sweden in 500 AD. Another theme which is explored is human inability to tolerate that which is different. Gerard Butler is extremely effective as Beowulf, but perhaps the best performance in the movie is that delivered by the tempestuous and weirdly beautiful land of Iceland. I think this movie is definitely worth seeing. 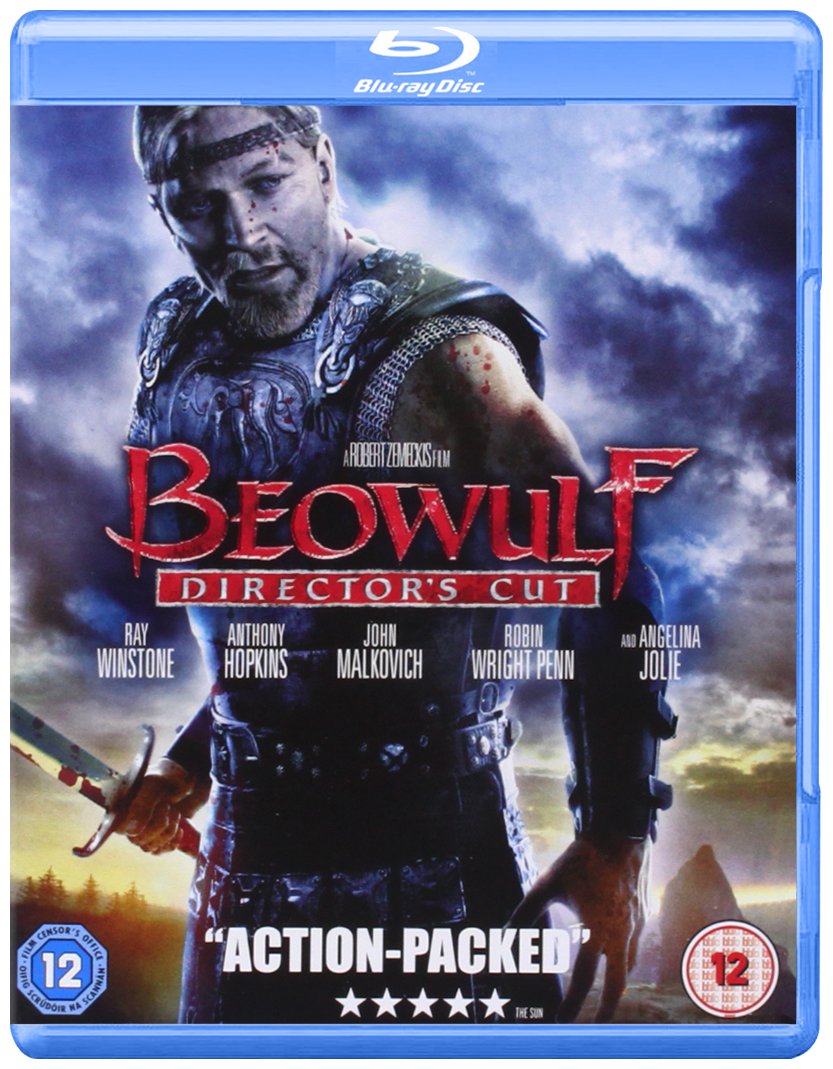 Set in 507, Beowulf is a legendary Geatish warrior who travels to Denmark with his band of soldiers, including his best friend, Wiglaf. They meet King Hrothgar, who needs a hero to slay Grendel (Crispin Glover), a hideously disfigured troll-like creature with superhuman strength. Grendel attacks Heorot, Hrothgar’s mead hall, whenever the Danes held a celebration, and Hrothgar has been forced to close the hall. Upon arriving, Beowulf becomes attracted to Hrothgar’s wife, Queen Wealtheow, who reciprocates his interest.Beowulf and his men celebrate in Heorot to lure Grendel out. When the beast attacks, Beowulf engages him unarmed and naked. During the fight, Beowulf discovers that Grendel has hypersensitive hearing, which is why he interrupts Hrothgar’s celebrations – the noise they make is physically painful to him. After his eardrums are ruptured by Beowulf, Grendel attempts to escape. Beowulf restrains Grendel and severs his arm with the door. In thanks for freeing his kingdom from the monster, Hrothgar gives Beowulf his golden drinking horn, which commemorates Hrothgar’s victory over the mighty dragon Fafnir.In his cave, the dying Grendel tells his mother what was done to him, and she swears revenge. She travels to Heorot and slaughters Beowulf’s men while they are sleeping. Hrothgar tells both Beowulf and Wiglaf, who had been sleeping outside the hall during the attack, that it was the work of Grendel’s mother. She is the last of the Water Demons, who were thought to have left the land. Beowulf and Wiglaf travel to the demon’s cave to slay her. Beowulf enters the cave alone and encounters the demon, who takes the form of a beautiful woman. She offers to make him the greatest king who ever lived, in exchange for a son to replace Grendel and Hrothgar’s drinking horn.Beowulf agrees to the deal and returns, claiming to have killed her. Hrothgar, however, realizes the truth. He indirectly tells Beowulf that, much like him, Hrothgar was seduced by her, and Grendel was the result of their tryst. Hrothgar crowns Beowulf king, much to the dismay of his royal advisor, Unferth, who was hoping to take the throne. Hrothgar then commits suicide by jumping from the castle parapet onto the beach below. A wave momentarily engulfs Hrothgar’s body, there is a golden flash underwater, and the body is gone.Years later, the elderly Beowulf is married to Wealtheow. Over the years they had grown apart, husband and wife in name alone. Beowulf takes a mistress, Ursula, but his tryst with Grendel’s mother has left him sterile. One day, Unferth’s slave Cain finds the golden drinking horn in a swamp near Grendel’s cave and brings it back to the kingdom. That night, a nearby village is destroyed by a dragon, which leaves Unferth alive to deliver a message to King Beowulf: the dragon is Beowulf’s son born to Grendel’s mother. Removing the horn has voided the agreement between Beowulf and Grendel’s mother, who has now sent their son, the dragon, to destroy his kingdom.Beowulf and Wiglaf go to the cave once again and Beowulf enters the cave alone. When Grendel’s mother appears, Beowulf gives her the golden horn, but she refuses to stop the attacks. The dragon flies straight towards Beowulf’s home, threatening Wealtheow and Ursula. Despite his age, Beowulf goes to great lengths to stop the monster, even severing his own arm. Eventually, he kills the dragon by ripping its heart out. A mortally wounded Beowulf watches the dragon transforming into a humanoid body and being washed out to sea. As Wiglaf approaches him, Beowulf tries to tell the truth about his affair with Grendel’s mother, but Wiglaf insists on keeping his legacy intact. Beowulf then dies.As the new king, Wiglaf gives Beowulf a Norse funeral. Grendel’s mother appears and gives Beowulf a final kiss before his burning ship sinks into the sea. Wiglaf sees the golden horn in the sand while Grendel’s mother floats in the sea, looking at him seductively. The movie ends ambiguously with Wiglaf holding the horn and staring back at her.The plot isn’t much to write home about. The acting is variable – Robin Wright-Penn is fine, Hopkins is his usual reliable self, Ray Winstone is suitably heroic as the heroic, self-aggrandising Beowulf, and Crispin Glover is just brilliant as Grendel. Grendel is a lovely creation, oozing slime and blood, and wracked with pain. It’s entertainment. And I was royally entertained.