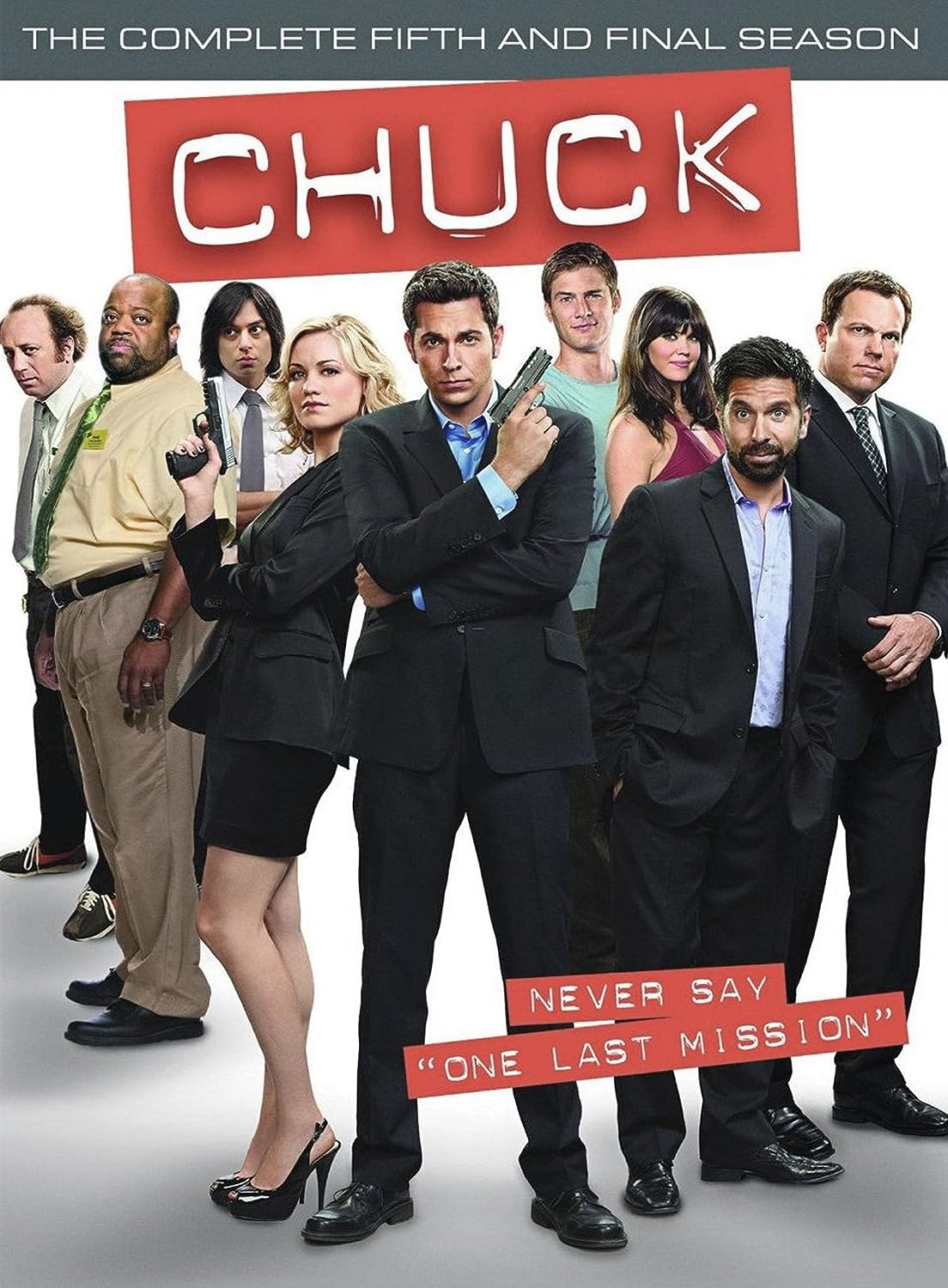 Chuck Bartowski no longer possesses the Intersect, but has matured into a confident and capable secret agent. As he mentors the new Intersect, he also has to deal with the fact he and his team are now independent contractors with bills to pay and rival companies to compete with. When a dangerous agent comes after the Intersect, Chuck has to call upon his resources and training to stop them.

Chuck has always been a curious show, a geek comedy with dramatic and romantic overtones whose tone has often spun on a dime. The show has always done a good job of managing these different tones and styles, keeping everything grounded though Zachary Levi’s earnest-but-sympathetic performance as the title character. In the fifth season, the show experiences several additional such tonal shifts, as Chuck is betrayed by his best friend (but it turns out not to be his fault) and, most surprisingly, has his life almost ruined in the final few episodes of the series. For a show that’s always been quite warm-hearted and entertainingly cheesy, the surprisingly bleak tone of the final few episodes comes as a bit of a shock.

The season  only consists of thirteen episodes. Given the tone of the show, I was confidently expecting some last-minute solution or cure would be found. Instead, we get a highly inconclusive ending. It’s not quite The Sopranos, but the series ending without ever answering the central question poised by the last couple of episodes is an unexpected and possibly even brave choice. Whether it’s the right choice is one that fans will be arguing about for years to come. For myself, Chuck has always been first and foremost an escapist and fun show, not a gritty drama like the new BSG or something from HBO. Ending the show in this manner feels out of character for the series, and a little bit of pointless torture for our main characters who really deserved more of a happy ending.

That aside, the final season of Chuck is entertaining, well-acted and often quite funny.  the ending will be divisive, but certainly the season is worth watching for established fans. In particular, the way Chuck’s character develops across the five seasons, going from nerd to an intelligent, resourceful agent  does pay off very well here.

As Reed Richards and Sue Storm prepare for their wedding, a silver object enters Earth’s atmosphere, creating 1 mile wide craters across the Earth. General Hager asks Reed to track and identify its movements. He initially refuses, to appease Sue, who feels he is again neglecting her for his work. However, he secretly builds a radar tracker to locate the object, as the Army requests.

During the wedding, Reed’s systems detect the phenomenon approaching New York City, which suffers a blackout since it emits electromagnetic pulses that cause power outages. Johnny Storm, the Human Torch, pursues the object, discovering it to be a silver humanoid on a flying surfboard. The “Silver Surfer” drags him into the upper atmosphere, suffocating him, and drops him. During his fall, Johnny finds his flame powers fluctuating and barely survives, successfully flying only at the last moment. Later, Sue and Johnny switch powers when they touch, prompting Reed to deduce that exposure to the Surfer has affected Johnny’s molecular structure, allowing him to switch powers with his teammates through physical contact. Tracing the cosmic energy of the Surfer, Reed discovers that a series of planets the alien has visited have all been destroyed.

With the Surfer creating craters around the globe, Reed determines that the next will appear in London. The team arrives too late to stop the crater, which drains the River Thames, but they prevent the London Eye from collapsing after it is damaged by the quake (though Johnny nearly thwarts their effect in the process when he switches powers with Reed). Afterward, Reed and Sue contemplate abandoning their lives as superheroes in order to have a normal life and raise a family, but are unaware that Johnny is listening. Meanwhile, the Surfer’s movements around the globe bring him past Latveria, where the cosmic energy affects Victor Von Doom, freeing him from two years encased in metal. A scarred Doom traces the Surfer to the Russell Glacier and offers to join forces. When the Surfer rebuffs him, Doom attacks. The Surfer retaliates, blasting Doom through the ice, but the cosmic energy of the Surfer’s blast heals Doom’s body.

Doom leverages his experience into a deal with the American military, who force the Fantastic Four to work with Doom. Deducing that the Surfer’s board is the source of his power, Reed develops a tachyon pulse generator that will separate him from it, while Doom works on a machine whose function he keeps a secret. In the Black Forest, the Surfer confronts Sue and reveals he is merely a servant to the destroyer of worlds, and regrets the destruction he causes. The military opens fire on the Surfer, which distracts him and allows the Fantastic Four to fire the pulse, separating the Surfer from his board. The military imprisons the Surfer in Siberia, where they torture him for information. Sue uses her powers to sneak into his cell, where he reveals more information. He tells her his master, known by the people of his world as Galactus, is a massive cloud-like cosmic entity that feeds on life-bearing planets to survive, and that his board is a homing beacon summoning Galactus to the planet. The Silver Surfer has to serve Galactus, who will otherwise destroy not only his loved ones but also his planet.

Using the device he has created earlier, Doom betrays Hager and steals the board from the compound, killing the majority of the Army present there. The Fantastic Four rescue the Surfer and pursue Doom in the Fantasticar, confronting him in Shanghai. During the battle, Sue is mortally wounded. With the Surfer powerless, Johnny absorbs the combined powers of the entire team (inspired by comics character the Super-Skrull) in order to battle the now cosmic energy-empowered Doom. Johnny succeeds in breaking Doom’s controlling device over the Surfer’s board, and Ben Grimm uses a nearby crane to knock Doom into the harbor, possibly drowning him. However, Galactus arrives and Sue dies in Reed’s arms. The Surfer regains control of his board, restoring his power. He revives Sue and chooses to defend Earth, flying, with an extra boost from Johnny, into Galactus. The conflict results in a massive blast of energy that engulfs Galactus, and apparently kills the Surfer as well. Johnny has recovered his stable molecular state after touching the Surfer’s board. Reed and Sue get married in Japan, in an abbreviated ceremony. Receiving news that Venice is sinking into the Adriatic, the team heads to Italy. In a post-credits scene, the Silver Surfer’s seemingly lifeless body floats through space. His eyes then open and his board races toward him, showing that he is still alive.

A great sequel to the first film – good, fun, family friendly superhero action with lots of effects and action and a decent enough story to keep you entertained