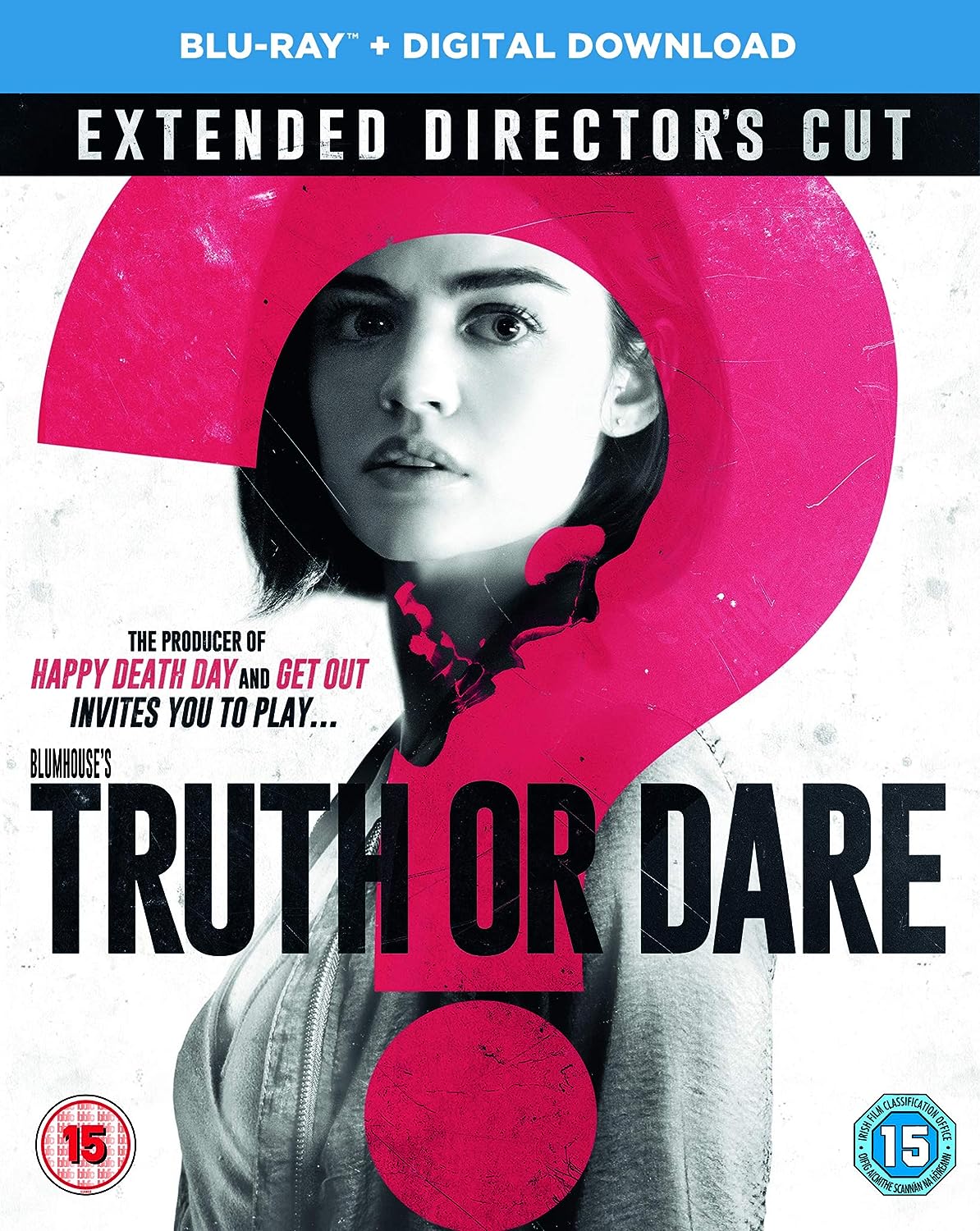 Olivia Barron, her best friend Markie Cameron, Markie’s boyfriend Lucas Moreno, along with Penelope Amari and her boyfriend Tyson Curran, and Brad Chang go on a trip to Rosarito, Mexico. In Mexico, Olivia runs into fellow student Ronnie who proceeds to harass her until a man intervenes on her behalf. The man introduces himself as Carter and eventually convinces her and her friends to join him for drinks at the ruins of a mission. There, Carter initiates a game of Truth or Dare with Olivia and her friends, plus Ronnie, who followed the group. Eventually, the game ends when Carter reveals that he deceived Olivia as a means of tricking her and her friends to the mission to offer them in his place in the supernatural game of Truth or Dare. As Carter leaves, he explains to Olivia that the game will follow them and they must not refuse it.At a local college bar, sometime after everyone returned from Mexico, Ronnie dies when he fails to complete a dare. Olivia, having become convinced that Carter was telling the truth, gathers and attempts to convince her friends that the game is real. The game, playing in accordance to the order the group played in Mexico, turns to Markie, having already appeared to Olivia and Lucas, and she is forced to break Olivia’s hand. At the hospital, Brad is then forced by the game into revealing to his father, Officer Han Chang, his homosexuality.The next day, the skeptical Tyson lies when forced to tell a truth and, as a result, dies. A drunken Penelope is next forced by the game to drink and finish a full bottle of vodka whilst walking along the edge of the roof of a house. She eventually falls from the roof after finishing the bottle, but is saved by Brad, Markie, and Olivia. The group manage to come into contact with a woman named Giselle, who is also a participant in a separate incarnation of the game, and the group go to meet her.

Giselle reveals that she and her friends played the game and her friend Sam, the only other survivor of her incarnation of the game, was responsible for the game becoming reality in the first place, having wrecked the ruins of the mission. Giselle reveals that a truth can only be chosen twice before the next player is forced to chose dare. Giselle draws a handgun on Olivia and shoots, confessing that she was dared to kill her. However, Penelope jumps in front of Olivia and is shot and killed. Failing to kill Olivia, Giselle shoots herself in the head. Later, following Olivia, Lucas, and Markie’s turns in the game, Brad is dared to withdraw his father’s gun and make him beg for his life. However, in the act, Brad is shot and killed by an approaching officer. At the precinct, Olivia learns that Carter is Sam. 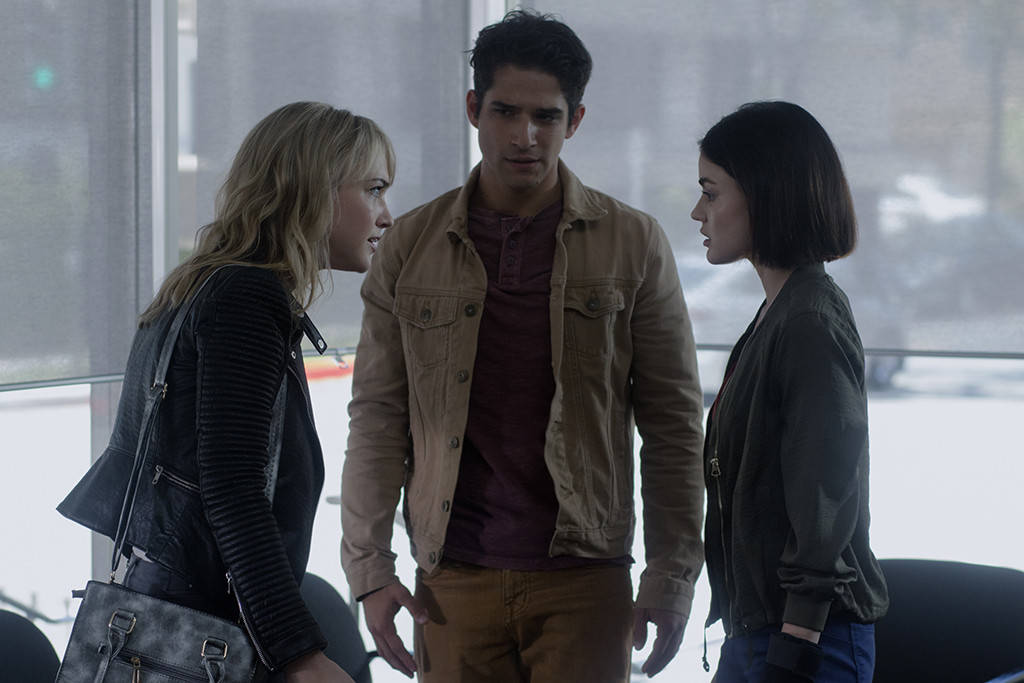 Olivia and Lucas drive to Tijuana and meet with a mute woman and former nun who operated out of the church in which they originally played the game. The woman informs them that they are dealing with a demon she first summoned, who possessed the game of Truth or Dare and can only be stopped if the last person who evoked it sacrifices their tongue into an urn and seals it with wax after an incantation is made in the church.Olivia, Markie, and Lucas find Sam and force him at gunpoint back to the ruins of the church in Mexico. There, Sam begins the ritual and is about to sever his tongue when it becomes Lucas’ turn to play the game. Lucas is dared to kill either Olivia or Markie, which he refuses. Possessed by the demon controlling the game, Lucas is forced to kill Sam, before the latter can complete the ritual to end the game. He then proceeds to slit his throat and die.Olivia forces the demon to reveal to her whether or not there was a definitive way to end the game with Markie and herself alive. The demon reveals that now that Sam is dead, there is not – but they can draw more people into the game and prolong their turn in it. Olivia hastily records and uploads a video to YouTube, warning of the game and its rules, before challenging the viewer of the video to Truth or Dare, initiating them, effectively involving millions of new Truth or Dare players therefore postponing her and Markie’s involvement in the game for the rest of their lives thus saving them.Wow the haters all came out for this one. There was nothing wrong with this film. The directing, writing/screenplay, acting, cinematography, score and vfx where all on point! I really enjoyed this one and it was much better than most of the films out lately in this genre. Watch it, you will be happy you did. 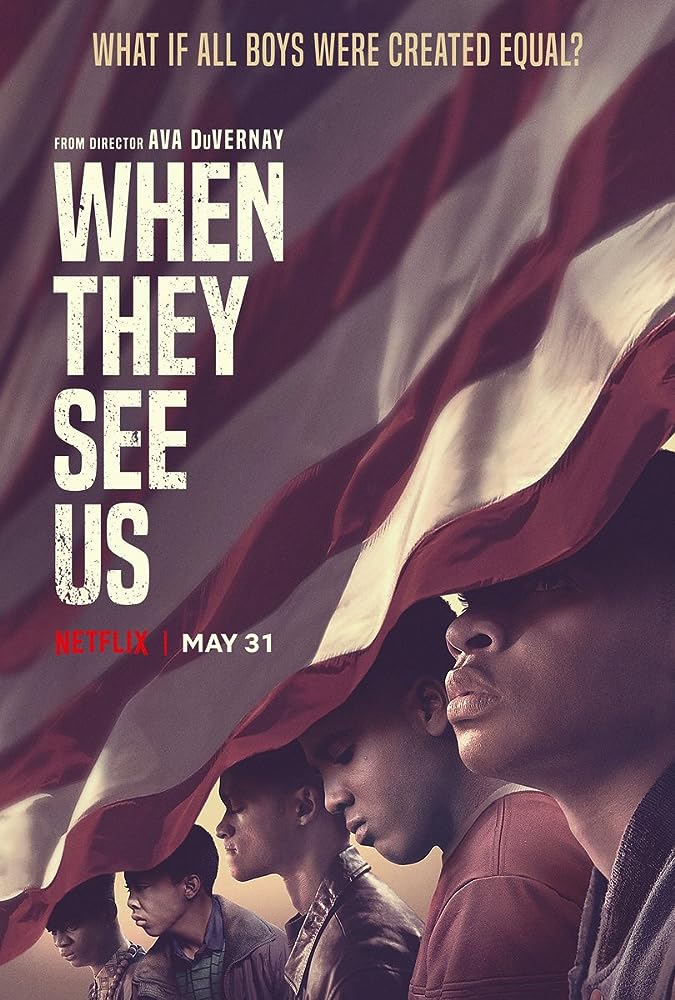 When They See Us,  premiering on Netflix, is the kind of miniseries you get when the right showrunner assembles the right team and right performers with the unequivocating intent to correct an important story that many people still get wrong. In this case, the celebrated producer, director and screenwriter Ava DuVernay (“Selma”; “Queen Sugar”) takes on the injustice of what happened to the Central Park Five — four African American men and one Hispanic man who, as teenagers, were rounded up, taken to a police precinct office and coerced into saying they brutally assaulted and raped a white woman who was jogging in Central Park one evening in April 1989. 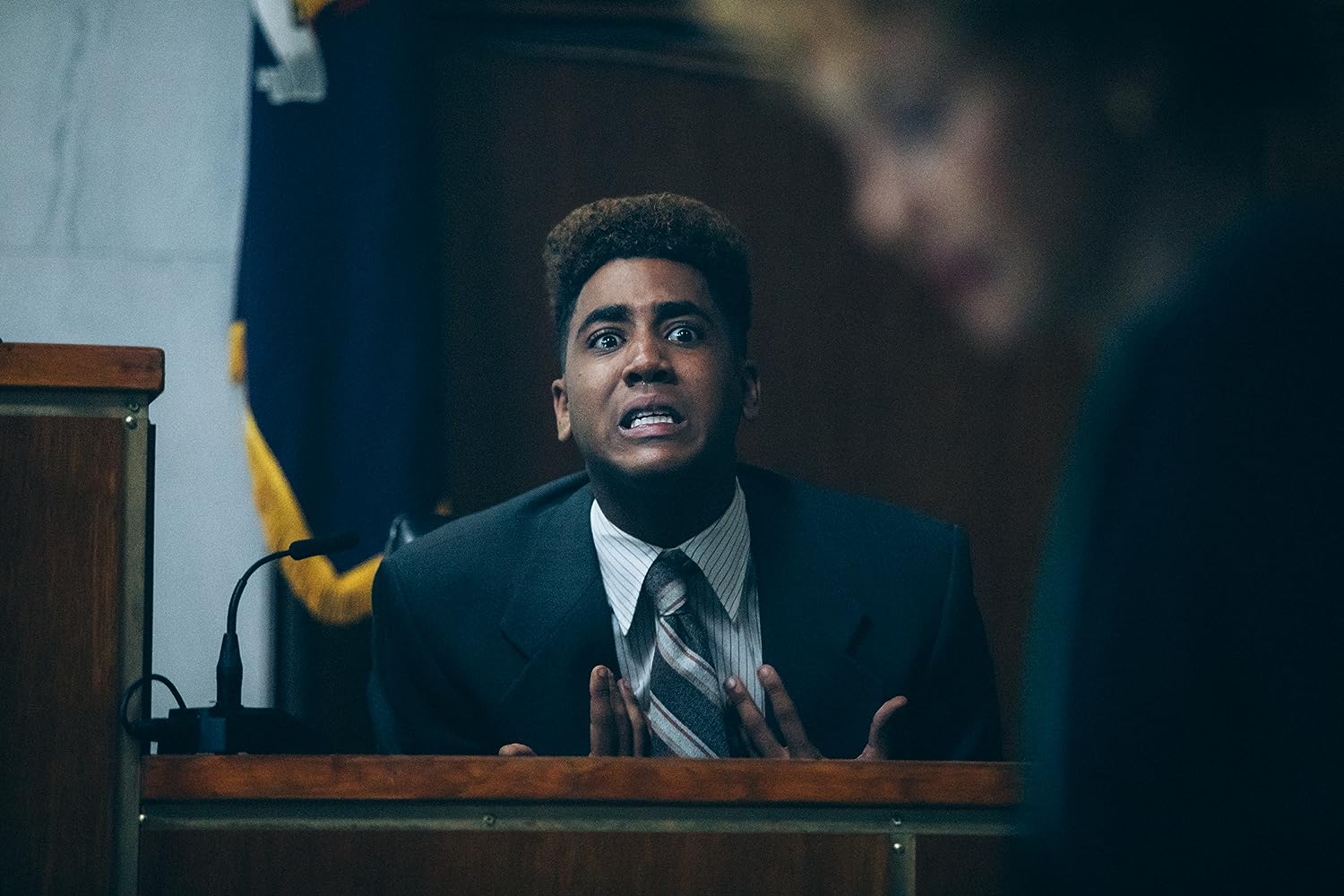 There was never any physical evidence that they did. The boys, who ranged in age from 14 to 16, confessed after many hours of coercion, intimidation and threats from detectives; two of the boys were separately urged by their fathers to tell the police what they wanted to hear. In media coverage, the boys were compared to savages who took part in a “wilding” crime spree. The real estate mogul Donald Trump took out newspaper ads to demand their execution. The boys — Korey Wise, Yusef Salaam, Raymond Santana, Kevin Richardson and Antron McCray — were found guilty on some of the charges in a 1990 trial. They spent between six and 13 years in detention centers and prisons. As everyone ought to know by now, the jogger’s true attacker confessed in 2002 and his DNA matched the physical evidence. A state Supreme Court vacated the Central Park Five’s sentences on the district attorney’s recommendation. As adults, the five men sued the city and finally reached a $41 million settlement in 2014 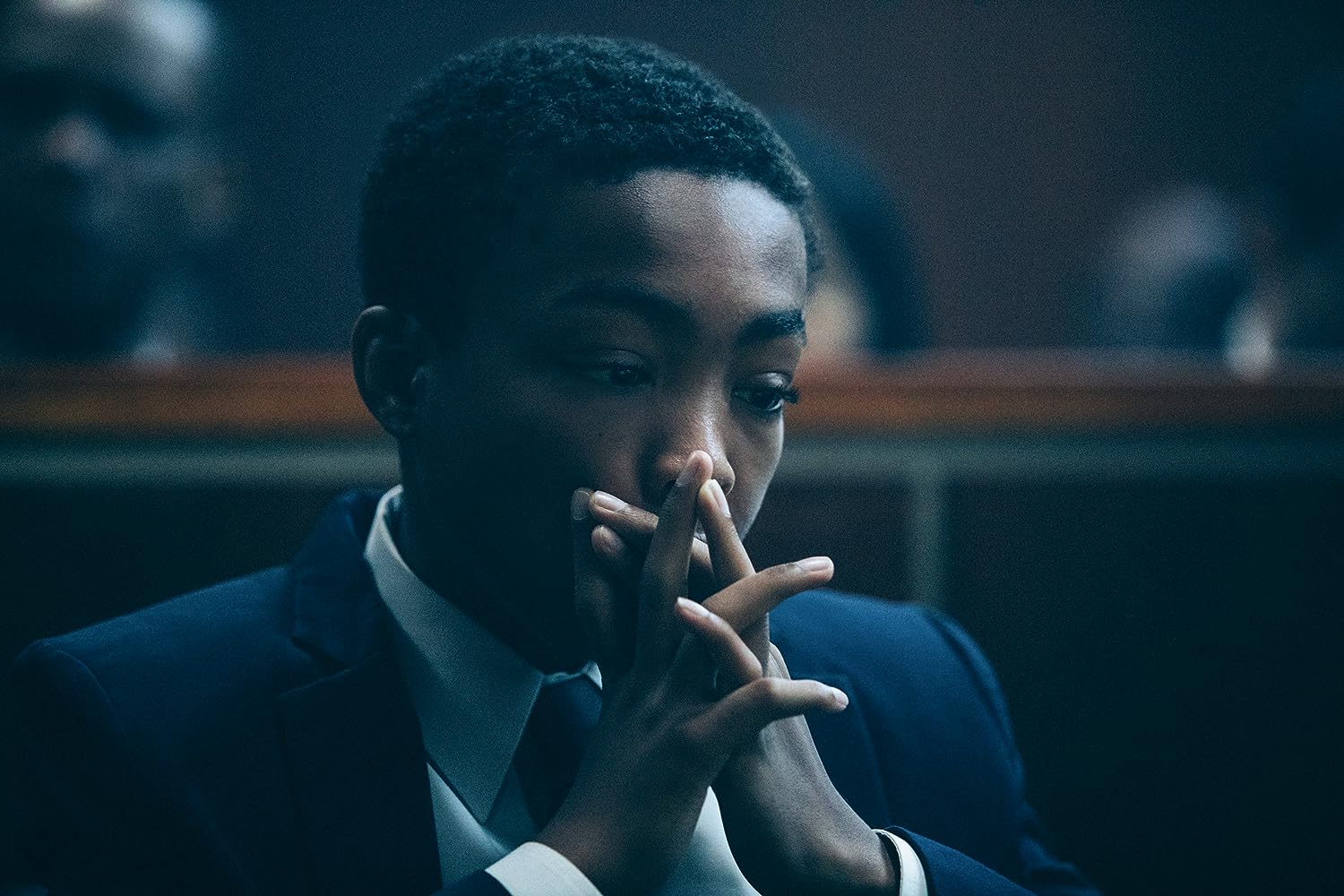 If the next words that occur to you are “Yes, but what about the victim?” (meaning the jogger, Trisha Meili, who wrote a memoir and still publicly expresses her doubt about a lone attacker, as well as her disappointment that the city agreed to a settlement), then it seems you have two options, 30 years later: You can absorb what “When They See Us” is trying to tell you, or you can retreat comfortably back to the open-shut templates of “Law & Order” reruns. Split into four episodes, DuVernay’s approach bluntly but successfully turns this story inside-out, borrowing the look of true-crime dramas while discarding the genre’s usual tropes. It focuses primarily on the boys, their families and the irreparable effects of their jailing. Rather than lionize them, it goes one better and humanizes them. As the title suggests, it’s all about how they were seen, and, by extension, how most minority teenage boys are still often seen — not as children and young citizens, but as potential thugs. The series is deftly attuned to context, portraying a late-’80s New York that seethes with mob mentality when it comes to solving and prosecuting this particular crime — which, to be sure, was both heinous and infuriating. This is a drama about modern lynching; rather than leading to a noose and branch, it follows the Central Park Five on a ruinous trip through a penal system that finds ways to punish inmates even after they’re paroled.

In tone and execution, “When They See Us” fits somewhere between John Ridley’s underwatched ABC anthology “American Crime,” which also subverted the procedural genre in revealing ways, and Ryan Murphy’s FX hit “The People v. O.J. Simpson: American Crime Story,” which taught viewers a thing or two about the effects of time and context. Without any background primer, the first episode moves quickly through the night of the crime and the days after, beginning with the adolescent lure of watching a group of one’s peers decide, in the moment, to head off to Central Park on a spring evening. The pace and dialogue are not expository, nor do they provide much time to get to know the boys intimately as characters. (That comes later.) The young actors playing the teens (Jharrel Jerome as Korey; Ethan Herisse as Yusef; Caleel Harris as Antron; Asante Blackk as Kevin; Marquis Rodriguez as Raymond) ably convey the confusion and panic of being misidentified, hauled in and falsely accused.

Felicity Huffman (talk about timing) plays Linda Fairstein, the newly appointed head of the district attorney’s sex-crimes unit, who arrives at the crime scene not long after an unconscious, nearly dead Meili was discovered. “When They See Us” is unsparing in the way it portrays Fairstein pushing detectives to make the case fit the wilding narrative. You better believe DuVernay is in no mood to re-litigate, build a Wikipedia page or pay lip service to anybody’s doubts. Here, in this telling, the cops are almost always corrupt, Fairstein is menacingly reckless and the prosecutor (Vera Farmiga as Elizabeth Lederer) lucks out in the second episode with a jury willing to convict the boys based on the videotaped confessions alone.

This swift treatment of the crime and the trial allows DuVernay and her co-writers(Robin Swicord, Attica Locke, Yusuf Hassan and Michael Starrbury) to spread their wings in the series’ second half: Once the headlines die down, the boys become men — first languishing behind bars and then, after most of them make parole, trying to put their lives back together. The story of their parents and family (with fine performances from Niecy Nash, John Leguizamo and Michael K. Williams, among others) also begin to take shape. The showstopper comes in the fourth episode, as Korey, who was tried and convicted as an adult rather than as a juvenile, embarks on a violently terrifying, dozen-year journey through the state prison system, which includes a long detour into solitary confinement and a heartbreaking, hallucinatory (yet artfully envisioned) glimpse of his past and present. Jerome, the only actor in the series to play both the teen and adult versions of his character, gives a remarkable performance, as the system beats Korey down to the mental equivalent of rubble and he emerges as an entirely different man. When the news of his freedom comes — and the series reaches its full, swelling sense of the miraculous — the viewer will finally understand his or her part in all this: All that’s being asked of us is to see.