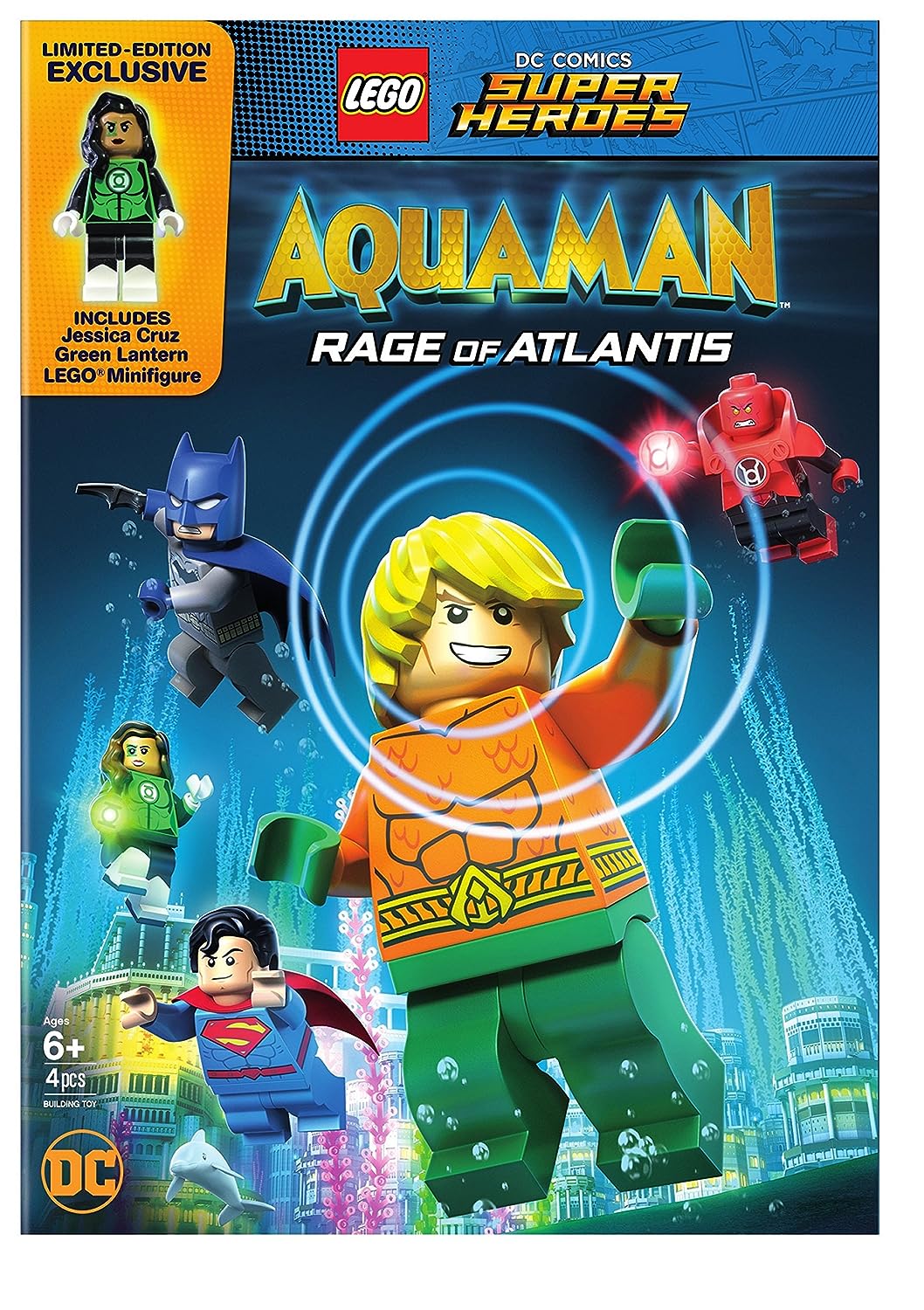 At the Hall of Justice, Justice League newcomer Jessica Cruz is busy examining for suspicious activity when the Trouble Alert goes off, alerting Batman, Superman, Wonder Woman and Cyborg about Lobo’s attack on a warehouse at Dread Lake storing alien technology. When Aquaman receives word of this, he attempts to join in. He soon realizes that Dread Lake is in fact a dry lake bed, leaving Aquaman’s abilities futile as he is repeatedly beaten by Lobo until the Justice League arrive. Although Lobo manages to escape with a glowing blue orb despite their efforts.

Wanting to lighten the mood, Aquaman invites the Justice League to a feast that Atlantis is hosting in honor of his anniversary as king. While attending the feast (using a spray Batman designed to help them breathe underwater), Aquaman’s brother Ocean Master soon gathers the inhabitants of Atlantis where the entire city is engulfed in a bizarre red light which begins to corrupt and enrage them (a force field created by Cruz prevents the Justice League from its effects). With Atlantis under his influence, Ocean Master reveals an Atlantean scroll which reveals a law that only a pure-blood Atlantean can be king. Since Aquaman is half-human, he reluctantly gives up the crown to Ocean Master.

Now in control, Ocean Master introduces his corrupted subjects to his new adviser Atrocitus, leader of the Red Lantern Corps (who was responsible for corrupting the Atlanteans) and demands the destruction of the Justice League. Attempting to escape the corrupted Atlanteans, Aquaman and the Justice League use a device known as the Atlantean Gateway (which can open portals to other water-based worlds) to escape. However, Cruz fails to enter the portal before it closes.

The Justice League end up arriving on a desert world with a red sun (rendering Superman powerless) and find themselves in a factory of Red Lantern vehicles and robots. Noticing that this planet’s end of the gateway is being powered by the orb Lobo stole, the Justice League realize that Atrocitus plans to send his forces to Earth and have the Atlanteans invade the surface world. After escaping the factory, the Justice League have Aquaman (who is naturally drawn to water due to his Atlantean physiology) lead them to water where they find it in a bar known as the Watering Hole and learn that water on this planet has become scarce and expensive on this planet ever since Atrocitus drained it dry. Fearing that Earth will suffer a similar fate, the Justice League become determined to return home. Encountering Lobo, they learn that he was hired to steal the orb by Ocean Master and request his assistance in exchange for returning his beloved dolphin Fishy (who was also corrupted by the Red Lanterns) to him….an offer Lobo reluctantly accepts.

Back on Earth, Cruz is rescued by Mera who initially attempts to aid against the corrupted Atlanteans only to be corrupted herself. Escaping on a Red Lantern vehicle, Cruz makes it to a seaside fair where the Atlantean invasion begins. Cruz, Robin and Batgirl do their best to fend off the invading Atlanteans led by an enraged Mera. Upon realizing that the entire world is watching her on the news, Cruz flees from the battle, but works up the courage to return and fight back when she sees Mera attempting to corrupt Batgirl and Robin. Using her power ring, Cruz is able to defeat Mera and negate the effects of the Red Lantern light, returning Mera to her benevolent self.

Elsewhere, the Justice League attempt to return to Earth. They succeed in shutting down the Red Lantern’s factory and the Gateway, but not before Fishy, Red Lantern Corps member Dex-Starr and a handful of Red Lantern drones make their way through it. Upset for their failure, Lobo storms off. The Justice League manage to use some reserve power and new vehicles to temporarily re-open the Gateway and return to Earth, but are defeated by Ocean Master and Atrocitus and locked in a gold cage.

At this moment, Atrocitus betrays Ocean Master and reveals his true intentions. Using a weapon known as the Submerged Limitless Underwater Rapid Pump (S.L.U.R.P.), Atrocitus plans to drain Earth’s water supply and spray it into space until Earth is as dry as a desert. Seeing the error of his ways, Ocean Master helps the Justice League escape and uses his magic to protect them from the Red Lantern’s light. Using the Trident of Poseidon (which can only be wielded by the rightful king of Atlantis), Aquaman is able to defeat Atrocitus and destroy the Red Lantern power battery (the source of his power), undoing the effects of its light. Surfacing, the Justice League, Batgirl, Robin and Mera attempt to destroy the S.L.U.R.P. but their efforts prove futile. Lobo (who has been reunited with Fishy) arrives to aid the Justice League. With Aquaman’s advice to work together, the combined efforts of the Justice League and Lobo destroy the S.L.U.R.P. while Superman pushes the water that was already drained (which had frozen into a brick of ice) back into Earth’s atmosphere where it melts into rain and is restored to Earth’s oceans.

With Atlantis the peaceful and happy kingdom it once was once more, Ocean Master apologizes for his actions and even admits to falsifying the law which dethroned Aquaman in the first place. This, coupled with the fact that Aquaman was able to wield the Trident of Poseidon allow Aquaman to be reinstated as King of Atlantis. Atrocitus and Dex-Starr are handcuffed and acquired by Lobo who plans to head to Oa to collect the bounty placed on them. As he leaves with Fishy, Lobo states that when he returns he “might not be on his best behavior”. As the Justice League celebrate their victory, Cyborg receives word that Gorilla Grodd and his forces are attacking Kathmandu, forcing the Justice League into action.

Aquaman must battle foes in the air, on land and in the depths of the Seven Seas, along with some help from The Justice League, to save the day . As a big fan of DC’s Lego movies i was very excited for this but unfortunately although i was entertained for sure i was also disappointed and that was mostly with Aquaman which for at least the first 2 acts is a bit silly and dumb plus the villains were so cheesy and not as good as some previous Lego villains such as Joker and Reverse Flash. Overall decent Lego DC Film but it could have been better also.

Billions of years ago, the Oan scientist Krona was obsessed with uncovering the origins of the universe, and he created a machine that’d allow him to pull back the curtain and witness that initial spark of creation. This forbidden quest created an antimatter universe and led to Krona’s transformation into a being of pure energy. The consequences of his actions placed the entire universe — multiple realities, even — in grave danger, prompting Krona’s fellow Oans to rechristen themselves the Guardians of the Universe.

To atone for the havoc that Krona had wrought, the Guardians created an interstellar police force known as the Green Lanterns…creatures from one end of the universe to the other possessing great will and the capacity to overcome fear, each gifted with a power ring that is perhaps the most powerful weapon in creation. Despite the eons that have come and gone since the formation of the Green Lantern Corps, Krona’s destructive grip has yet to be fully eradicated. He’s planted a seed of destruction in the Oan sun that marks the very center of the universe, and the shadow demons he’s unleashed are devouring any Corpsmen they come across. As the Guardians rally the troops for what may be the greatest threat they’ve ever faced, seasoned Green Lantern Hal Jordan fills rookie Arisia Rrab in on the history of the Corps — its proudest moments and greatest figures — all of which will prove key to overcoming Krona once and for all.

Emerald Knights is handled so startlingly well here. Its visuals and storytelling both flow together wonderfully. The five very different stories that make up Emerald Knights all come together in its final moments, feeling very much like parts of a greater whole. It helps that all of the segments woven throughout the movie are consistently engaging. There’s not one I’d point to as a favorite or a disappointment; they’re all great. Even though this anthology by its very nature is continually bounding from one story to the next, Emerald Knights still feels intensely focused. These stories are short but immediately establish a sense of character and purpose, and the fact that there are such dazzlingly well-choreographed fight sequences, strikingly fluid animation, and an appropriate sense of awe and cosmic wonder maintain that initial adrenaline rush. The Lanterns that make up the Corps are on one hand strange and alien, and yet they do come across as a cohesive whole. Its characters are injected with enough personality that I almost forget their inspired, otherworldly appearances, and it doesn’t hurt that they’re brought to life by vocal talent like Firefly’s Nathan Fillion and Mad Men’s Elisabeth Moss either.