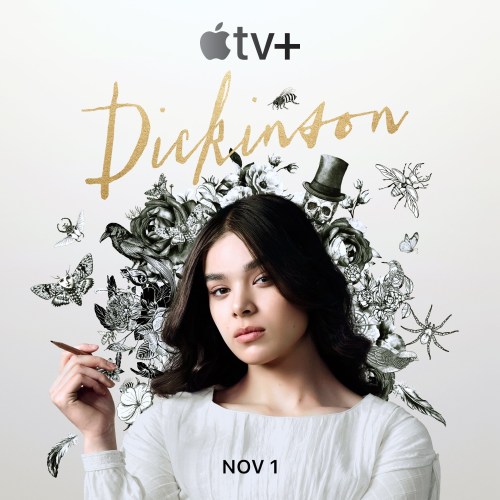 This is such bullshit. That’s how 19th-century poet Emily Dickinson (Hailee Steinfeld) feels – as Apple TV+ series Dickinson would have it – about being asked to fetch water at four in the morning. Never mind that the expletive wasn’t invented until nearly a century later. And never mind that “pretty psyched”, “nailed it” and “yo” weren’t exactly kicking around then, either. Dickinson is a peculiar, messy, anachronistic delight.Some reviews have taken issue with Alena Smith’s comedy series, one of the first batch of original shows from the newly launched Apple TV+, for its strangely contemporary language. But it makes a kind of sense, given that its hero was out of step with the order of the day. The real-life Massachusetts poet had her ambitions scuppered by a father (played here by Toby Huss) who did “not approve of a woman seeking to build herself a literary reputation”. In that respect, Steinfeld is perfectly cast. She has a face – and a set of elastic expressions – that feels both well-suited to a period piece (as first displayed in her Oscar-nominated role in True Grit in 2010), and resolutely out of place in it. Just as Emily Dickinson was. Steinfeld crackles with charm and impropriety.

When we meet Emily, her mother (30 Rock’s Jane Krakowski, sweetly cruel as ever) is unsuccessfully attempting to marry her off to any man available. Emily is is as uninterested as her mother is desperate, partly because she wants to become a great writer, and “a husband would put a stop to that”, and partly because she’s in love with her best friend Sue (Ella Hunt), who is engaged to her brother Austin (Adrian Enscoe) but who steals clandestine kisses with Emily in the rain.

That part actually is historically accurate. Or at least, based in truth – the real-life Dickinson would write long, unmistakably romantic love letters to Susan: “Susie, will you indeed come home next Saturday, and be my own again, and kiss me as you used to?” The solemn, elegant 2016 film A Quiet Passion, in which Cynthia Nixon played a far more timid version of Dickinson than Steinfeld portrays, omitted this relationship. Another recent adaptation (Dickinson’s having a comeback, it seems), 2018’s Wild Nights With Emily, made it its focus. It’s to Dickinson’s credit that it neither shies away from, nor ogles at, the affair between the two.

But there is another great love in Emily’s life – death. This is where things gets really weird. Making very literal the immortalised line, “Because I could not stop for death/ He kindly stopped for me”, Emily is visited at night, to the strains of Billie Eilish’s “Bury A Friend” no less, by a carriage containing the human embodiment of death. And who better to play the part than a gold-toothed, top-hatted Wiz Khalifa? Surprisingly, the rapper and Steinfeld shares a wry, roiling chemistry. “You’ll be the only Dickinson they’ll talk about in 200 years,” he tells her. I don’t think they’ll be talking about this Dickinson in 200 years. But it’s very fun nonetheless.