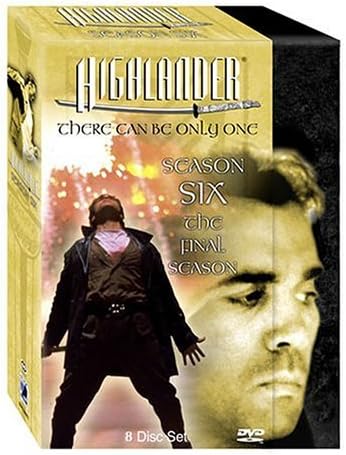 After the murder of his friend and fellow immortal Richie Ryan, Duncan MacLeod (Adrian Paul) retreats to a Southeast Asian monastery for a year and mentally prepares for his battle against the demon Ahriman. Ahriman taunts MacLeod by appearing in the guises of the Highlander’s late enemies: the rogue watcher James Horton (Peter Hudson) and the leader of the four horsemen, Kronos (Valentine Pelka). The friendships between Duncan, ancient immortal Methos (Peter Wingfield), and watcher Joe Dawson (Jim Byrnes) also become strained as MacLeod retreats to his Parisian barge, aides several female immortals from his past, and tries to find himself again.

Yeah, that is kind of a sucky summary of Highlander: The Series’ 13 episode final season. Unfortunately, this season itself is kind of sucky and should most definitely not be used as judgment for the series as a whole. Year 6 begins a little hokey with the two-part Ahriman opener “Avatar” and “Armageddon,” then concludes with an It’s A Wonderful Life cop out in “To Be” and “Not to Be.” Yes, it’s too abstract, David Lynch-esque, and mystical, but the Ahriman storyline- carried over from the finale of Season 5- both takes too long to get over with and yet seems to be too easily wrapped up and tidy. While a fan of the series can see the importance of MacLeod going this route, questioning the meaning of his immortal life, and despairing over the death his longevity causes; this critical turn is only explored in half the episodes this season. Highlander: The Series just gets too weird here, departing from all that made it so great in favor of bad immortal crime and female revenge crap. This tiresome stretch of chicks all seem the same and drive this season into the ground.

We’ve never seen any of these women before- at the very least why should we care about them when the immortals we know and love have so much more to tell? If anything, Season 6 has me feeling a little bit of resentment for these guesting women who do nothing but waste the precious time being taken away from our real players. Though a lovely piece in of itself, only MacLeod ends up with some small resolution in the series finale- which seems more like a mid-season two-parter by magically presenting the alternate possibilities of the rest of our company. Yes, the show is supposed to be about The Highlander. However, over the previous 5 seasons, we saw just how much MacLeod both rose and fell based on the mortal and immortal support about him. To simply have the others smile as the sun sets is a little unfair for all the characters- and certainly unkind to the audience. But again, it is still a lovely final episode, complete with a tear-jerking Highlander: The Series goodbye montage. Sniff.

Fortunately, there are a few goods to be had this season. “Diplomatic Immunity” and “Black Tower” are worthy MacLeod centric episodes. “Unusual Suspects” with Roger Daltry returning as Hugh Fitzcairn is also great in another fun, all in the past delight that again proves more could have been done historically instead of resorting to these immortal women follies. And let’s talk about all these guesting female immortals. Isn’t it amazing that in 13 episodes, it seems like we’ve had more lady immortals than in all the previous seasons combined? Hmm, why is that? Some of these gals are, unfortunately, seriously bad. Dara Tomanovich (Bio-Dome) as Alex Raven in “Sins of the Father” is kind of cool, perhaps the first female immortal who can actually fight and likes it. Her plot and motorcycle style, are however, a bit Renegade; and again, I wonder why Highlander: The Series would choose to retread this route.

Even more tragic is Alice Evans  in “Patient Number 7.” While it’s not a bad premise, the episode is just very badly done, and Evans most definitely cannot carry one show, let alone an entire spin off. Likewise, “Justice” and “Deadly Exposure” just stink. Claudia Christian (Babylon 5) is lovely, but her backdoor pilot “Two of Hearts” is just…no. Not only does it have none of the regular players, but also the subsequent episode “Indiscretions” exclusively features Dawson and Methos and thus proves just how unnecessary all this Star Search for the next female immortal really was. You want another gal in the cast? It might have been nice to see more of Joe’s daughter Amy (Louise Taylor, Eyes Wide Shut) as a player in Highlander: The Watcher Adventures. Anything would have been better than how Season 6 actually turned out, I’m just saying.

Of course, the MacLeod specific episodes are still the best, but remember, Duncan is, well, barely there in Year 6. Of course, we’re sorry to see him go, but in many ways, one can understand star Adrian Paul’s readiness to depart towards bigger and better things. He even cuts his hair, people! Seriously, what else was left for Mac? Why did they need to reduce the character to a shadow of his former self this season anyway? Did they really have so little faith in the rest of the cast without him? Why couldn’t Duncan have stayed monking it out in his temple while Joe, Methos, Amanda, and a new watcher or young immortal or two had adventures searching the globe for the elusive Highlander? Although it’s kind of silly, I want to say Season 6 is a little underhanded in the way MacLeod is treated. After 5 years, he can go through whatever serious stuff he wants this season- so long as he gets over it in 3 episodes? It’s almost cruel to end Highlander: The Series this way. As I wrote in my Season 5 essay, I would watch “The Modern Prometheus,” skip the Year 5 finale “Archangel,” and the Ahriman plot, then pick up “Unusual Suspects” and “Indiscretions” here before the series conclusion. Everything else is kind of a slap in the face for longtime viewers.

Fortunately, we spend this shortened season exclusively in Paris, and the European locations and period flashbacks are great as always. We see a lot of pre-MacLeod times and places in a good portion of the flashbacks- thanks to our rotating door of 1,000 year old immortal gals (Didn’t we already have a 1200 year old immortal gal? coughamandacough) Still, it’s nice to see that the historical style holds up without the eponymous man himself. Unfortunately, the action suffers this season thanks to all those guest ladies who can’t hold a sword to save their lives. They all also seem to wear the exact same pair of black jeans with a zippered up black leather motorcycle bomber, too. And again, chick Quickenings are a Hell No. Even Duncan’s sweet Barge suffers- losing all its wonderful art and décor so Mac can have a more Zen like environment. While season 6 may leave a bitter taste even in the Highlander completist’s mouth, it’s more important to look at the gem of the series overall.