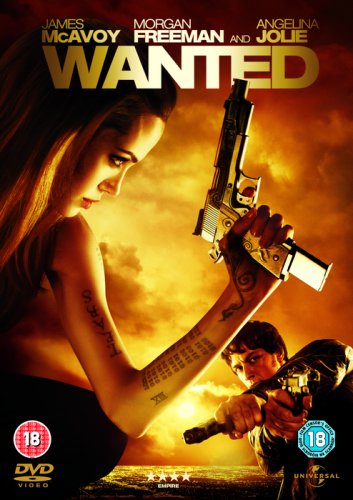 In Chicago, 24-year-old Wesley Gibson (James McAvoy) works at a dead-end desk job with an overbearing boss, takes anti-anxiety medication for panic attacks, and has an unfaithful live-in girlfriend who cheats on him with his friend and colleague, Barry (Chris Pratt). One night at the pharmacy, Wesley is told by a woman named Fox (Angelina Jolie) that his recently murdered father was an assassin, and the killer, a man named Cross (Thomas Kretschmann), is now hunting him. Cross and Fox engage in a shoot-out with hi-tech guns. Wesley panics and runs into the parking lot followed by Cross who steals a truck and attempts to run Wesley down. Fox flips Wesley into her car and then calmly executes a spectacular escape.

Wesley awakens in a mysterious factory surrounded by Fox and other fellow assassins. The group’s leader, Sloan (Morgan Freeman), forces Wesley at gunpoint to shoot the wings off of several flies buzzing around a trash can, which he does, much to Wesley’s shock. Sloan explains that Wesley’s panic attacks are actually the untrained expression of a rare ability that allows Wesley’s body to distribute massive amounts of adrenaline, granting superhuman strength, speed, and heightened perception. He reveals that Wesley’s father, as well as Cross, were members of the Fraternity, a secret society of assassins that maintains balance in the world. Sloan wants to teach him to become an assassin so that he may help them kill Cross.

Wesley awakens the next morning in his apartment, quickly stashing the gun Sloan gave him (which belonged to his father) in his toilet. He then discovers that his bank account now contains several million dollars. Filled with new confidence, Wesley snaps in a public outburst against his boss before picking up his keyboard and hitting Barry in the face with it as he leaves. Fox arrives while Wesley is outside looking at newspaper headlines that he is wanted by police over the previous night’s shooting.

Wesley begins training as an assassin under Fox’s tutelage, studying under different specialized assassins (the Butcher teaches knife fighting, the Gunsmith teaches marksmanship, and the Repairman teaches endurance and hand-to-hand combat). Frustrated by his lack of progress and the brutality of the training, Wesley insists to Sloan he is ready, but is denied going after Cross. Fox, overhearing Wesley complaining, beats him until he admits he does not know who he is. Sloan tells Wesley about his father, and how he was betrayed by Cross. Reinvigorated with new purpose, Wesley begins to take his training to heart and starts to excel. Sloan then shows him the Loom of Fate, which gives the names of future targets through errors in the fabric. Those whom the Loom identifies will apparently create evil and chaos in the future, but only Sloan can see and interpret the messages. After his first assassination, Wesley tells Fox that he is questioning whether the Fraternity is right. Fox tells him about how her father was burned alive by a hired killer who had been targeted by the Loom weeks beforehand, but a Fraternity member had failed to pull the trigger.

After several missions, Wesley returns to his old apartment to retrieve his father’s gun. He soon has a shootout with Cross, wherein Wesley accidentally kills the Exterminator, a Fraternity member he had befriended. Cross shoots Wesley in the shoulder. Sloan grants Wesley’s wish to avenge his father and sends him after Cross—but then secretly gives Fox a mission to kill Wesley, saying that his name had come up in the Loom, as well. Analyzing the bullet that hit Wesley, it is discovered that it was manufactured by a man named Pekwarsky. Wesley and Fox capture Pekwarsky, who arranges a meeting with Cross. Wesley faces Cross alone on a moving train. Fox steals a car and crashes it into the train, causing a derailment. After Cross saves Wesley from falling into a ravine, Wesley fatally shoots him. Before dying, Cross reveals that he is Wesley’s real father. Fox confirms this, and explains that Wesley was recruited because he was the only person Cross would not kill. Fox points her gun at Wesley, but he shoots the glass under him and falls into the river.

Wesley is retrieved by Pekwarsky, who takes him to Wesley’s late father’s apartment (which is located just opposite to his own) and explains that Sloan started manufacturing targets for profit after discovering that he was targeted by the Loom of Fate, and he did not tell the Fraternity members that they were now nothing more than paid killers. Cross discovered the truth, went rogue, and started killing Fraternity members to keep them away from his son. Pekwarsky departs, stating that Wesley’s father wished him a life free of violence. Wesley, however, decides to kill Sloan after discovering a secret room containing all of his father’s weapons and schematics to attack the Fraternity.

Wesley launches a single all out assault on the Fraternity using explosive rats (a tactic he learned from the Exterminator), killing a majority of them in an explosive gun battle. Upon entering Sloan’s office, he is surrounded and reveals Sloan’s deception. Sloan reveals that all of the assassins’ names had come up in the weaving, and that he had acted to protect them. He gives the members a choice: kill themselves, per the code, or kill Wesley and maintain their power over the world. As the Gunsmith and others prepare to kill Wesley, Fox curves a bullet around the room, choosing to follow the code and kill everyone. She throws her gun to Wesley before being killed by her own bullet. Wesley pursues Sloan to the now destroyed Loom chamber, but Sloan manages to escape.

Afterwards, Wesley checks his bank account and sees that Sloan has seized his funds, leaving Wesley broke again. A man is seen at Wesley’s desk much later. Sloan appears and points a gun at the back of the man’s head. The man turns around and is revealed to be a decoy. Sloan sees an “X” on the floor, and, shocked, says, “Oh, fuck.”, and is killed by Wesley using a long-distance bullet. Wesley states this is him taking back control from his life before turning to the audience and asking “What the fuck have you done lately?”Overall this was a very good film, with enough thrills and spills to keep you entertained and a plot that keeps you interested throughout. It is one you could easily watch more than once and if you have yet to see this I recommend you check it out at some point in the near future.