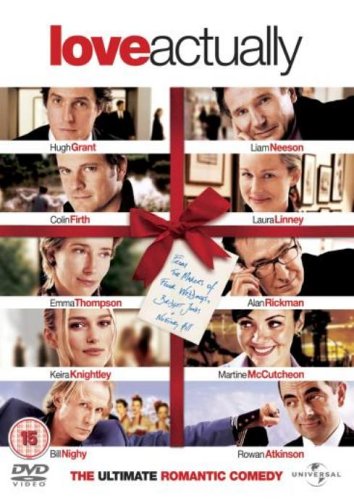 The film begins with a voiceover from David (Hugh Grant) commenting that whenever he gets gloomy with the state of the world he thinks about the arrivals terminal at Heathrow Airport, and the pure uncomplicated love felt as friends and families welcome their arriving loved ones. David’s voiceover also relates that all the messages left by the people who died on the 9/11 planes were messages of love and not hate. The film then tells the ‘love stories’ of many people:

Juliet (Keira Knightley) and Peter (Chiwetel Ejiofor) get married in a lovely ceremony orchestrated and videotaped by Mark (Andrew Lincoln), the best man. He promises no funny business on their wedding day, but as they walk down the aisle as husband and wife, a singer, choir and band appear performing “All You Need Is Love”. Both Juliet and Peter believe that Mark dislikes her to the point that, when she has a favour to ask, Peter warns his best friend to be nice. Mark avoids seeing her so he will not have to show her his taped version of her wedding, but she stops by one day with a snack hoping to get him to warm to her. She confesses that she knows they are not close, but asks him to give her a chance. When asked to show her the tape, he feigns ignorance of where it is, but Juliet quickly finds it after only a brief search. She pops it in and at first is happy to see a decent shot of her in her wedding dress as the professionals messed theirs up. As the video continues, she sees it’s focused only on her and it causes her to stop talking. Left in an uncomfortable silence, Mark can only blurt out that he acts that way for ‘self-preservation’ before running out and leaving her alone. On Christmas Eve, the doorbell rings at Juliet and Peter’s house. She runs down and opens the door, only to find Mark, carrying a boom box playing Christmas songs and large cue cards. The first one tells her to tell her husband that it’s carol singers. One by one, the cards confess his love for her. Then he walks away. Juliet runs after him to give him a quick, innocent kiss and runs back inside.

Writer Jamie (Colin Firth) is pushed to Juliet and Peter’s wedding by his girlfriend (Sienna Guillory) as she feigns illness. He returns between the ceremony and the reception to check on her. Finding his brother there, at first he believes his explanation, but the reality is revealed when she yells down to his brother that she wants to have sex a few more times before Jamie comes back. Crushed by this, Jamie withdraws to his French cottage where he meets Portuguese housekeeper Aurélia (Lúcia Moniz) who speaks only her native tongue. Despite their inability to communicate, they have similar personalities and become attached to each other. When Jamie returns to England, he realises he is in love with Aurélia and begins learning Portuguese. He returns to France to find her and ends up walking through town, gathering people as they walk to her job at a restaurant. In his broken Portuguese he declares his love for her and proposes. She responds, “Thank you. That will be nice. Yes is being my answer” in broken English as the crowd erupts in applause.

Harry (Alan Rickman) is the managing director of a design agency; Mia (Heike Makatsch) is his new secretary. Harry is comfortably married to his wife, Karen (Emma Thompson), who stays home to raise their children. Harry becomes increasingly aroused by Mia’s overtly sexual comments and actions at the office and does nothing to dissuade her. At the company Christmas party held at Mark’s gallery, he not only inquires if Mark is her boyfriend, but dances closely with her. While at the shops, he calls Mia to find out what she wants for Christmas and ends up almost caught by his wife purchasing an expensive necklace from the jewellery department thanks to the salesman Rufus (Rowan Atkinson). Later on, Karen discovers the necklace in Harry’s coat pocket and happily assumes it is a gift for her. When he hands her a similarly shaped box to open on Christmas Eve, she is heartbroken to find it is a Joni Mitchell CD instead and struggles to hide her pain from her husband and children. She realises that the necklace was for someone else and asks him what he would do if he was her and if the supposed affair is just sex or more than sex (love). When he sees the harm he’s done to his wife, he is truly sorry and calls himself a fool. She responds that not only has he made a mockery of their marriage but of her and the way she chose to live her life.

Karen’s brother, David (Hugh Grant), is the recently elected Prime Minister. Natalie (Martine McCutcheon) is a new junior member of the household staff at 10 Downing Street and from the moment they meet, there is a spark that David continuously admonishes himself for. One day, while meeting with the U.S. President (Billy Bob Thornton), they run into Natalie and the president makes some inappropriate comments to David about Natalie’s body. Later, David walks in on Natalie serving tea and biscuits to the president, and it appears that something untoward is happening. Natalie seems ashamed, but the President has a sly grin on his face. Due to this, when he gives his political speech, David is uncharacteristically assertive while taking a stand against the President’s intimidating policies. Finding that his relationship with Natalie has become strained and a distraction, David has her moved to another job. However, he is spurred to action on Christmas Eve when he finds a Christmas card from Natalie declaring that she is his and no one else’s. After a hilarious door to door search of her street, he comes across Mia, who informs him that Natalie lives next door. The entire family is on their way out the door to a multi-school Christmas play and he offers to drive them so he can talk to her. After Natalie sneaks him in to the school, he runs into his heartbroken sister who believes he is there for his niece and nephew. As the two try to keep from being seen and watch the show from backstage, they finally kiss. All their hiding was for nothing because as the curtain rises, they are seen kissing by everyone.

Daniel (Liam Neeson), Karen’s friend, mourns the recent death of his wife Joanna, as he tries to raise his stepson Sam (Thomas Sangster) alone. Sam has fallen for an American classmate, also named Joanna (Olivia Olson), and, after discussion with his stepfather, decides to learn the drums so that he can accompany her in the big finale for their school’s Christmas pageant (the same one that Natalie’s nephew and Karen and Harry’s children are in). After Sam feels that he missed his chance to make an impression on her, Daniel convinces Sam that he must go catch Joanna, who is returning to the US, at the airport that night and show her how he feels, lest he regret it for his whole life. Sam runs away from the airport security and says hi to Joanna, who then kisses him on the cheek. Meanwhile, Daniel, who previously mentioned admiring supermodel Claudia Schiffer, meets Carol, played by Schiffer, the parent of another of Sam’s school mates.

Sarah (Laura Linney) first appears at Juliet and Peter’s wedding, sitting next to her friend Jamie. She is an American who works at Harry’s graphic design company and has been in love for years with the company’s creative director, Karl (Rodrigo Santoro). For unknown reasons they admire one another from afar, but neither is willing to make the first move. They finally connect at the Christmas party and he drives her home. They kiss but before more could occur, they are interrupted by her mentally ill brother, Michael, phoning from his residence in a mental care facility. Sarah and Karl’s evening tryst is aborted and Karl leaves. On Christmas Eve both are working late and, when Karl wishes her good night, he tries to say more but cannot and only wishes her Merry Christmas. As he leaves, Michael phones and she spends the night with him, sharing her Christmas scarf.

Colin, Tony, and the American girls

After several blunders attempting to woo various English women, including Mia and Nancy (Julia Davis), the caterer at Juliet and Peter’s wedding, Colin Frissell (Kris Marshall) informs his friend Tony (Abdul Salis) he plans to go to America and find love there, convinced that his Britishness will be an asset to him in a foreign country. Landing in Milwaukee, Wisconsin, Colin meets Stacey (Ivana Miličević), Jeannie (January Jones), and Carol-Anne (Elisha Cuthbert), three stunningly attractive women who fall for his Basildon accent and invite him to stay at their home, where they are joined by roommate Harriet (Shannon Elizabeth).

John (Martin Freeman) and Judy (Joanna Page) are professional body doubles for films. They meet for the sex scenes in a film for which Tony is a production assistant. John tells Judy that “It is nice to have someone [he] can just chat to.” While the two are perfectly comfortable being naked and simulating sex on-set, they are shy and tentative off-set. Carefully pursuing a relationship, they attend the Christmas pageant (involving David and Natalie, Harry and Karen’s children, Daniel and Sam, et al.) at the local school with John’s brother

Rufus, played by Rowan Atkinson, is the jewellery salesman, whose obsessive attention to gift-wrapping nearly results in Harry being caught buying a necklace for Mia by Karen. Also, it is his distraction of staff at the airport which allows Sam to sneak through to see Joanna. In the director and cast commentary, it is revealed that Rufus was originally supposed to be a Christmas angel; however, this was dropped from the final script.

The epilogue is set one month later; the relationships of the characters have continued to evolve. Billy arrives with a gorgeous groupie in tow, and confirms to Joe that his hit song has launched his successful comeback. Juliet, Peter, and Mark arrive together to meet Jamie and his new bride, Aurélia. Karen and the kids greet Harry, but Karen’s reaction suggests that they are struggling to move past his indiscretion. Sam greets Joanna, who has returned with her mother from America, and Daniel is joined by his new girlfriend Carol and her son. Newlyweds John and Judy, heading off to their honeymoon, run into Tony who is awaiting Colin as he returns from America. Colin returns with the gorgeous Harriet and her sister Carla (Denise Richards) who greets Tony with a hug and a kiss. Natalie aggressively welcomes David back from his flight in view of the press, indicating that their relationship is now public. These scenes dissolve into footage of actual arrivals at Heathrow Airport, as the screen is divided into an increasing number of smaller segments which form the shape of a heart, as The Beach Boys’ “God Only Knows” plays on.

the film is a bit over the top, a bit exaggerated, but it still works perfectly, has the perfect balance of humour and seriousness, and is one that I would see again