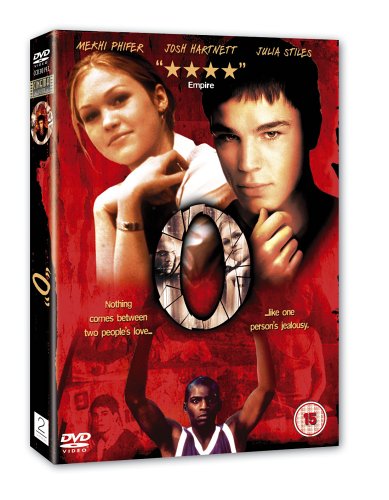 During a high school basketball game, Odin James (Phifer) scores the basket that wins the game for his team. Later at an awards ceremony, the coach, Duke Goulding (Martin Sheen) presents the MVP award to Odin for his efforts, an award he shares with his teammate Michael Cassio (Andrew Keegan). In giving Odin the award, Duke passes over his son Hugo (Hartnett), Odin’s teammate and best friend. At a party celebrating the victory, Hugo plans with school outcast Roger Calhoun (Elden Henson) to go to the school’s dean, Bob Brable (John Heard) and tell him that Odin raped his daughter, Desi (Stiles), whom Odin has been dating. Hugo promises Roger that Desi will be his after Odin is out of the way, but Roger is only a pawn in Hugo’s ultimate plan to destroy Odin.

Later in another game Odin’s team wins once again. At the celebration party, Hugo engineers a fight between Roger and a very drunk Michael, who is temporarily suspended from the team. Hugo tells Michael to ingratiate himself with Desi so that she will talk to Odin on his behalf. Soon afterward, Hugo tells Odin that Desi and Michael have been spending a lot of time together, and that she may be cheating on him. Odin doesn’t believe this at first, but gradually comes to suspect them. Odin questions Desi, but she calms him down and he believes her. Nevertheless, the stress of the situation drives Odin, a recovering cocaine addict, to begin using again. Hugo manipulates his girlfriend Emily (Rain Phoenix) into stealing a scarf for him that Odin had given to Desi. Hugo, in turn, gives it to Michael in hopes that Odin will believe that Desi gave Michael the scarf, and so is cheating on him. Meanwhile, Desi and Odin are having passionate sex at a motel. During their lovemaking, Odin sees an image of Michael on top of Desi in the mirror; angered, he becomes very rough with Desi, to the point that she cries out for him to stop, a plea he ignores. Afterward, they lie together staring in opposite directions.

After Odin assaults another student a game in a drug-fueled rage, Hugo tells him about the scarf, convincing him that Desi is cheating on him. Enraged, Odin vows to kill her; Hugo then promises to kill Michael. Hugo, with Odin and Roger, plans to kill Michael and Desi. Hugo and Roger attempt to kill Michael in a carjacking, but it does not go as planned: Roger and Michael struggle, Hugo hits Michael with a crowbar, knocking him unconscious. Roger shoots Michael in the leg, and then Hugo turns the gun on Roger and kills him after telling him that Desi is dead.

Odin and Desi are in Desi’s room talking and Odin is pretending to make up with her. They are making out on the bed when suddenly Odin attacks her; she fights back, but he finally strangles her. Emily rushes into the room and sees Desi’s body; she soon finds out what Hugo has done. She begins telling Odin that Hugo told her to steal the scarf and exposes his plot. Hugo tells her to shut up, but she refuses, so he shoots and kills her. Odin finally realizes that Hugo has been manipulating him the entire time, and demands to know why; Hugo refuses to answer. When the police arrive, Odin tells them what happened, and commits suicide, shooting himself in the heart. As Hugo is taken into police custody, he says in voice over that he will have his day in the spotlight.

Othello in the 20th century, and I don’t think it could have been imagined in a more powerful or original way. A true work of art, if at times violent (but then Shakespeare certainly didn’t shrink from it, either). The basic story is the same, though this is set at an exclusive college in the southern US, and the rivals are basketball players rather than soldiers, but all the characters are true to life and the acting is superb. Another Sundance Festival film, and the quality shows.

Cameron James, a new student at Padua High School in the Seattle area, becomes instantly smitten with popular sophomore Bianca Stratford. Geeky Michael Eckman warns him that Bianca is vapid and conceited, and that her overprotective father does not allow Bianca or her older sister, the shrewish Kat, to date. Kat, a senior, is accepted to Sarah Lawrence College in New York, but her father, Walter, wants her to stay close to home. Bianca wishes to date affluent senior Joey Donner, but Walter, an obstetrician worrisome of teenage pregnancy, will not allow his daughters to date until they graduate. Frustrated by Bianca’s insistence and Kat’s rebelliousness, Walter declares that Bianca may date only when Kat does, knowing that Kat’s antisocial attitude makes this unlikely.
When Cameron asks Bianca out, she informs him of her father’s new rule and, as a pretense for allowing her to date Joey, suggests that Cameron find someone willing to date Kat. Cameron selects “bad boy” Patrick Verona, but Patrick scares him off. Michael assists by convincing Joey to pay Patrick to take out Kat, under the pretense that this will allow Joey to date Bianca. Patrick agrees to the deal, but Kat rebuffs his first few advances. Michael and Cameron help him by prying Bianca for information on Kat’s likes and dislikes. Armed with this knowledge, Patrick begins to win Kat’s interest. She goes to a party with him, which enables Bianca to go as well, much to Walter’s dismay.

At the party, Kat becomes upset when she sees Bianca with Joey, and responds by getting drunk. Patrick attends to her, and Kat starts to open up, expressing her interest in starting a band. However, when she tries to kiss him, Patrick pulls away and Kat leaves, infuriated. Meanwhile, Bianca ignores Cameron in favor of Joey, leaving Cameron dejected. Patrick encourages him to go after what he wants and screw what Joey thinks Bianca soon realizes, however, that Joey is shallow and self-absorbed, and asks Cameron for a ride home. Cameron admits his feelings for her and his frustration with how she has treated him. Bianca responds by kissing him.
Joey offers to pay Patrick to take Kat to the prom so he can take Bianca. Patrick initially refuses, but relents when Joey offers him more money. Kat is still angry with Patrick, but he wins her over by serenading her with the accompaniment of the marching band, and she helps him sneak out of detention. They go on a date which turns romantic, but Kat becomes suspicious and angry when Patrick insists that she go with him to the prom, an event she is adamantly against. Bianca is irritated that Cameron hasn’t asked her to the prom, and so accepts Joey’s invitation, but Walter won’t allow it unless Kat goes too. Bianca claimed Kat was always a shrew about it, leading her to confess why she doesn’t want her sister to go with Joey. When they were freshmen, Kat had dated Joey and she succumbed to peer pressure by having sex with him because their friends were doing the same. Afterward she regretted it and Joey dumped her, so Kat vowed to never again do anything just because everyone else was doing it. Bianca insists that she can make her own choices, so Kat agrees to go to the prom with Patrick, and Bianca decides to go with Cameron instead of Joey.

All is going well at the prom until Bianca learns that Joey planned to have sex with her that night and is embarrassed by this. Angry that Bianca has spurned him for Cameron, Joey reveals his arrangement with Patrick, which causes Kat to leave heartbroken and embarrassed. Joey then punches Cameron for stealing his date and using Patrick for his own gain. He is in turn beaten up by Bianca who publicly scolds Joey for embarrassing her and hurting both her sister and Cameron. Bianca and Cameron share another kiss.
The next day, Bianca reconciles with Kat and begins dating Cameron. Walter is still concerned, but Kat wisely tells him that he needs to let Bianca make her own decisions. He admits that Kat is capable of taking care of herself and gives her permission to attend Sarah Lawrence College. For an assignment in which the students were required to write their own version of William Shakespeare’s Sonnet 141, Kat reads aloud a poem titled “10 Things I Hate About You”, revealing that she still loves Patrick. Patrick surprises her with a guitar bought with the money that Joey paid him, and confesses that he has fallen for her. Kat forgives him, and the two reconcile with a kiss.

A classy teen update on Shakespeare’s Taming of the Shrew, this excellently made and very diverting romantic comedy more than hits all the right comedic buttons as well as the romantic ones. The script’s nicely paced, the slick direction from newcomer Gil Junger’s inspiring and delightful and the end result is predictable but ever-so rewarding.