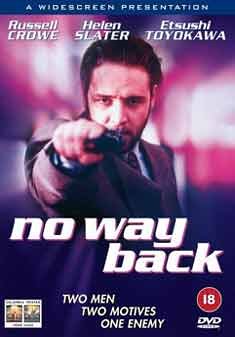 No Way Back stars Russell Crowe as Zack Grant, a special agent who is called upon to lead a federal unit to bring down the son of a huge mob boss, Frank Sariano (played by Michael Lerner). But after making a bad judgment call, and sending in a rookie agent who goes haywire, Zack lands himself in some hot water with his department. Yet, after figuring out that the agent he sent in was actually working with the Yakuza, and using a little detective work, Zack finds a way to clear his name. However, to do so won’t be easy.

Zack must journey to Japan and go undercover to bring back one of Yakuza’s big bosses, Yuji (Japanese actor Etsushi Toyokawa). Bringing Yuji back to justice won’t be easy because, not only will Zack have to deal with the Yakuza gunmen, Sariano has taken Grant’s son, and is offering a trade for the life of Yuji, whom he believes to be the man responsible in his son’s murder. Making the choice for Zack won’t be easy but along for the ride is a flighty stewardess (Helen Slater in the worst form of her career), who may be able to inspire Zack in to making the right choice. What ensues is an action road comedy, with a three-way twist when Zack is put in the middle of a three way “war”, with no side to call his own.

The film although lacking a little in the story department, just needed a few added scenes, the actors were great. The comic relief was great. Worth checking out for Supergirls Helen Slater.