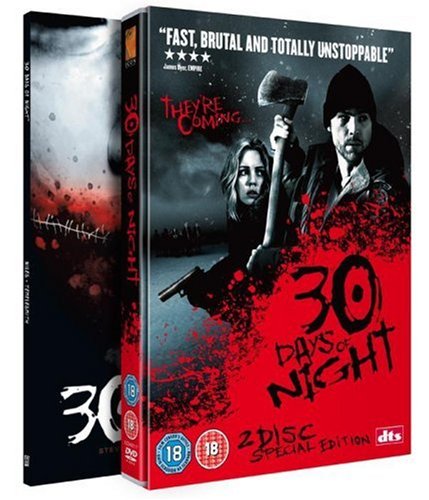 The town of Barrow, Alaska is preparing for its annual “30 Days of Night”, a period during the winter when there is a month-long polar night. As the town gets ready, a stranger (Ben Foster) rows ashore from a large ship and sabotages the town’s communications and transport to the outside world. Barrow’s sheriff, Eben Oleson (Josh Hartnett) investigates and also learns that his estranged wife, Stella (Melissa George), missed the last plane and must stay the 30 days. That night, a coven of feral vampires, led by Marlow (Danny Huston), attack and slaughter most of the townspeople, forcing Eben, Stella, Eben’s younger brother Jake (Mark Rendall), and several other survivors to take shelter in a boarded-up house with a hidden attic. Marlow finds the stranger locked up in the station. The stranger believed Marlow was going to turn him into a vampire. Marlow thanks him for doing what he asked, and then snaps his neck. Marlow ironically comments to his fellow vampires: “The things they believe.”Eighteen days later, when a blizzard hits, the group uses the whiteout to go to the general store for supplies, but are stranded after it ends. While the group heads for the station, Eben creates a diversion by having the vampires chase him to his grandmother’s house, where he uses one of her ultraviolet lights to burn the face of Marlow’s lover, Iris (Megan Franich), so badly that Marlow is forced to kill her. As he escapes, the town snow plow operator, Beau (Mark Boone Junior), creates another distraction with his tractor, killing many of the vampires, before trying to blow himself up; when he fails, Marlow crushes his head. Eben arrives at the station, where he is then forced to kill Carter (Nathaniel Lees), who has been bitten and is turning into a vampire.Two weeks later, Stella and Eben see the deputy, Billy (Manu Bennett), signaling them with a flashlight and bring him back to the station, after finding out he killed his family to save them from a more painful death. The trio find the others have made for the utilidor, a power and sewage treatment station that still has power, and head over there but are separated after Stella saves Gail Robbins (Rachel Maitland-Smith), a young girl whose family was slaughtered by a vampire named Zurial (John Rawls) who was stalking her. Eben and Billy make it to the utilidor but are attacked by Arvin (Andrew Stehlin), who bites Billy; Billy knocks Arvin into the heavy-duty shredder, before being killed by Eben because he is starting to turn.As the month comes to an end, with the sun due to rise, the vampires start to burn down the town to destroy evidence of their presence, and prevent any survivors from telling the world what happened. Realizing Stella is trapped and that he cannot beat the vampires in his current state, Eben turns himself into a vampire by injecting himself with Billy’s infected blood. He confronts Marlow, and they get into a vicious fight, before Marlow is finally killed by having a hole punched through his head, causing the remaining vampires to flee. Knowing he will die soon, Eben and Stella go off to watch the sunrise together, sharing one last kiss. As the sun comes up, Eben’s body burns to ash in Stella’s arms, while she stares at the sky, coming to grips with what has happened.For a movie that takes place almost completely in the dark, 30 Days Of Night is well shot. The snowbound settings and claustrophobic interiors instantly conjure up memories of Carpenter’s The Thing but the similarities are really only superficial.