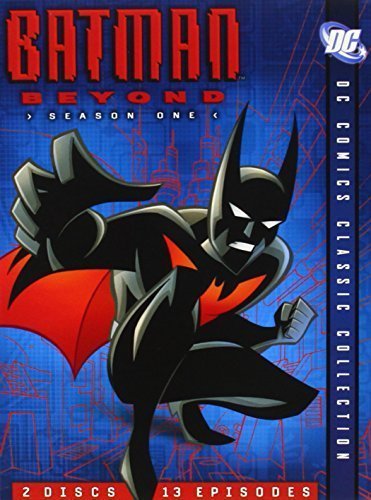 Fifty years after Batman: The Animated Series came to a close, Gotham City is without a protector. Failing health and a chilling act of desperation prompted Bruce Wayne to give up Batman’s cape and cowl, and the corporation that had stayed in his family for generations has been wrest from him by a corporate raider named Derek Powers. Never married and abandoned by his sidekicks, the elderly, embittered Wayne lurks inside a sprawling mansion that seems more like a mausoleum than the stately manor of old. Derek Powers is using the remnants of WayneCorp to illegally manufacture an endlessly destructive but extremely profitable nerve gas, a secret that Wayne/Powers employee Warren McGinnis stumbles upon and pays for with his life.

His troubled son Terry blames himself for the murder, but a chance encounter with Bruce Wayne results in the theft of a Batman suit brimming with cutting-edge technology and the revelation of the man truly responsible for his father’s death. By the time the two-part episode “Rebirth” is over, Bruce Wayne has agreed to guide Terry as the new Batman, and an irradiated Derek Powers is a walking fusion reactor.batman-beyondBatman: The Animated Series, Superman, and Justice League all drew heavily from the established mythos, but Batman Beyond is a largely original creation. Sure, there are quite a few nods to the original series — it’s still set in Gotham City, Barbara Gordon has taken the mantle of police commissioner, and there are winks to fans like the Grey Ghost costume in the Batcave.

Terry McGinnis is a very different lead character than Bruce Wayne was in Batman: The Animated Series. In the previous series, it seemed more as if Batman was who this man really was and Bruce Wayne was just an occasionally convenient mask for him to wear. Terry is seen out of costume much more frequently than Bruce ever was and feels like more of a fleshed-out character. He has friends, he has family, and he has a life outside of the pointy-eared hood. Gotham City is still teeming with bad guys, but even though Batman has been transplanted to the future, he’s not squaring off against Joker II or The Riddler Redux. The rogue’s gallery of this futuristic Batman doesn’t lift much from the previous animated series or even from the comics. The only familiar faces are Mr. Freeze, The Royal Flush Gang, and, briefly and unrecognizably, Bane. The other villains are original creations with some striking character designs, such as the amorphous corporate saboteur Inque, sound-engineer-with-a-power-suit Shriek, and the hypnotic Spellbound. This season also doesn’t rehash the same villains over and over again, with Inque being the only baddie other than Derek Powers’ Blight to strike more than once.

Several of the supervillains aren’t costumed-threats-of-the-week, but ordinary people in extraordinary situations: Willie Watt in “Golem” is a nerdy high schooler who seizes control of a two-story-tall construction robot to exact revenge on the bullies who torment him, and “The Winning Edge” is about high school athletes using steroids yet deftly avoids playing like ‘a very special episode of Batman Beyond’. One thing Batman’s adversaries, costumed and plainclothes alike, have in common is their origins. Nearly all of the villains in Batman Beyond are born of tragedy or greed, and that gives these episodes more of a resonance than something like The Joker pumping Gotham City with laughing gas for no reason in particular.

Another stand-out is “Shriek”, pitting Batman against an enemy whose technology enables him to manipulate sound. One of the most inventive sequences in the entire run of the series is set in a car factory where Batman starts setting off every piece of equipment in arm’s reach as a distraction. Shriek uses his technology to block out the noise and isolate Batman’s movements, resulting in an almost entirely silent battle with no dialogue, few sound effects, and a sparse, subtle score.

This first season of Batman Beyond is remarkably consistent, offering perhaps the strongest debut of any DC animated series to date.