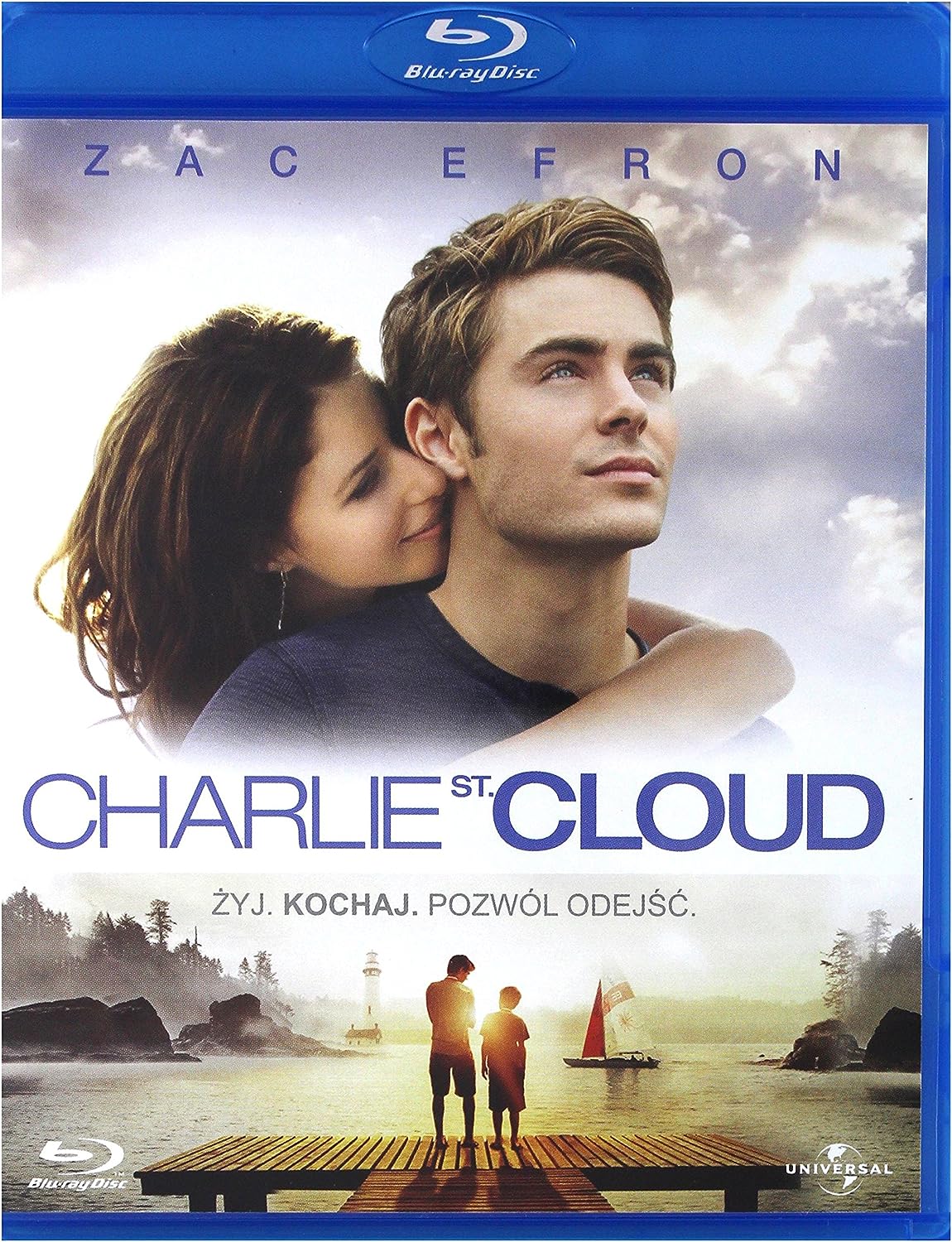 Charlie St. Cloud is a sailor who wins a boating race on his sailboat, the Splendid Splinter, along with his younger brother Sam. In 2005, he receives a sailing scholarship to Stanford University. Charlie graduates from Winslow High School and after returning from his graduation ceremony, Charlie promises Sam that they will practice baseball every day until he leaves for Stanford. That night Charlie is supposed to go to a graduation party with his friends, but his mother makes him babysit Sam while she picks up another shift at her job.When Sam watches television, Charlie tries sneaking out to the party. He is caught by Sam, who asks Charlie to drive him to his friend Tommy’s house. Charlie and Sam get into a car accident. During an out-of-body experience, Charlie hugs a badly wounded Sam and reassures him that everything will be fine. Knowing his injuries are fatal, Sam asks Charlie to never leave him alone, saying that if so they will always be together. As Charlie promises, a paramedic named Florio Ferrente revives Charlie; Sam has died in his arms. At Sam’s funeral, Charlie runs off after being unable to put Sam’s baseball glove in the grave. After a run through the woods, Charlie finds Sam’s spirit and discovers that Sam can interact with him on the physical plane. Charlie fulfills Sam’s dying wish by practicing baseball with him every day at sunset.Five years later, Charlie, who gave up his scholarship, is a caretaker at Waterside Cemetery. At the cemetery, he speaks with Sully, an old friend who died in the Marines. During a trip into town, Charlie visits the boat docks and meets Tess Carroll, a sailor planning to sail solo around the world. The following day, Charlie runs into Florio. Florio is dying of cancer and asks Charlie if he ever wonders why he was saved. Charlie returns to the cemetery and finds Tess injured tending her father’s grave. He takes her to his home to patch her up and they develop a relationship. Sam begins feeling that he is being erased from existence because Charlie is forgetting him when Charlie arrives late for their game. Tess follows Charlie and he explains to her that the more he is in her world, the less he is in Sam’s.Charlie discovers that Tess went missing while sailing through a storm a few days earlier; Charlie has been seeing her just like he can Sam. Florio’s wife Carla tells Charlie that Florio died the previous night. During one of the evenings Charlie and Tess have together they play hide and seek. Tess sticks a note on the door which says “come find me” with a drawing of a boat beneath it. Charlie realizes that Tess is not dead and that he must find her. Along with his friend Alistair and Tess’s coach Tink, Charlie takes a boat to find her. The following sunset, Charlie misses his game with Sam. As Charlie confesses his love for his departed sibling, Sam tells Charlie that he loves him back and moves on from the living world. He appears to Charlie as a shooting star in the sky to reveal Tess’ location. The group finds Tess’ wrecked boat along with her lying on the rocks. Charlie uses his body heat to keep Tess warm until they are found by the Coast Guard.Alistair tells Charlie that Tess had hypothermia and he saved her. Later, Charlie purchases an old dilapidated sail boat from a family-friend and asks Tess if she would like to take a ride with him. However, Tess fears him explaining that she had vivid dreams about them together. Charlie tells Tess that her dreams are memories and recites a quote from her father’s funeral that they spoke about in her dreams. Charlie resigns from his job and goes into the forest to say farewell to Sam, telling him they will always be brothers; although he is unable to see him, Sam is there and reveals that he is at peace. Sometime in the near future, Charlie and Tess complete repairs to the sail boat and set off to sail around the world.Though the story is heavy on the saccharine edge and strains credibility, the team of actors is very fine – especially Zac Efron, whose presence is on the screen in practically every frame – so the film ends up being endearing. The cinematography by Enrique Chediak is gorgeous and the musical score by Rolfe Kent leans heavily on sad love songs. It is not a profound film though it does dip gently into the ideas of ‘the beyond’, but there is something about the honesty of it all that makes it s a satisfying evening of entertainment.

High school student Wendy Christensen visits an amusement park with her boyfriend Jason Wise, best friend Carrie Dreyer, and Carrie’s boyfriend Kevin Fischer for their senior class field trip. As they board the Devil’s Flight roller coaster, Wendy has a premonition that the hydraulics securing the seat belts and roller coaster cars will fail, killing everyone on board. When she panics a fight breaks out and several people leave or are forced off the ride, including Kevin; best friends Ashley Fruend and Ashlyn Halperin; alumnus Frankie Cheeks; athlete Lewis Romero; and goths Ian McKinley and Erin Ulmer. As they leave they witness the roller coaster derail, killing the remaining passengers, including Jason and Carrie, leaving Wendy devastated.

5 months later, Kevin tells Wendy about the explosion of Flight 180 and the subsequent deaths of the survivors. Believing that Kevin is mocking her, Wendy dismisses his theory and leaves. Later on, Ashley and Ashlyn are killed at a tanning salon when a loosened shelf falls and locks them in the overheating tanning beds. Now convinced that Death is still after them, Wendy and Kevin set out to save the remaining survivors using omens hidden within photos that were taken of them the night of the accident.

Frankie dies next at a drive-thru when a runaway truck crashes into the back of Kevin’s truck, causing the engine fan to blow out and slice off the back of Frankie’s head. The next day, they try to save Lewis at the gym, but he tells them he doesn’t believe them shortly before two iron weights from the machine he is using swing down and crush his head. Next, they find Ian and Erin working at a hardware store. Wendy manages to save Ian before he is impaled by falling planks of wood, but a chain reaction causes Erin to fall backwards onto a nail gun, and she is shot repeatedly through the head. This leaves Ian devastated, and causes him to resent Wendy.

Later, Wendy learns that her sister Julie was also on the roller coaster, and rushes to the county fair to save her. She and Kevin are able to prevent Julie from being impaled on a harrow, and Wendy asks Julie who was sitting next to her on the roller coaster, as they are next on Death’s list. Her question is answered when Julie’s friend Perry Malinowski is suddenly impaled by a flagpole that is launched by a rope tied to a horse. Wendy saves Kevin from an exploding propane canister caused by all the commotion and is confronted by a deranged Ian, who blames her for Erin’s death. A set of fireworks go off in their direction and nearly hit Wendy, but she ducks and they strike a nearby cherry picker instead. As Ian shouts that Death cannot kill him, the cherry picker collapses and crushes him. Wendy believes the cherry picker was meant for her, but Ian inadvertently took her place.

Five months later, Wendy is on a subway train with her roommate Laura and friend Sean. After seeing more omens Wendy attempts to leave the train, but she encounters Julie as she enters the carriage and decides to stay. Wendy then notices Kevin sitting at the back end of the carriage. Suddenly the train derails and everyone on board dies: Julie is hit by a stray wheel; Kevin is ground between the train and tunnel wall; and Wendy survives the crash but is hit by another train. This turns out to be another premonition and the three attempt to stop the train. The screen then cuts to black, followed by the sound of screeching metal.

I am a Final Destination fan, and could not wait till this movie came out, and it was not a let down. Excellent scenes, excellent storyline, and new and unusual ways to die makes this an excellent addition to the first two.