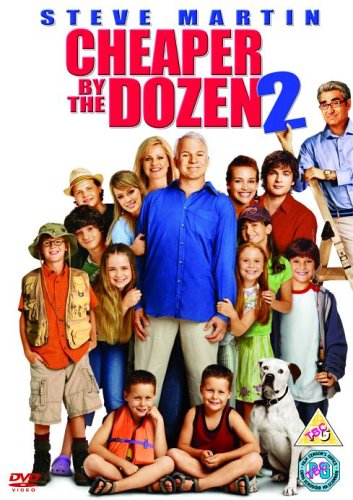 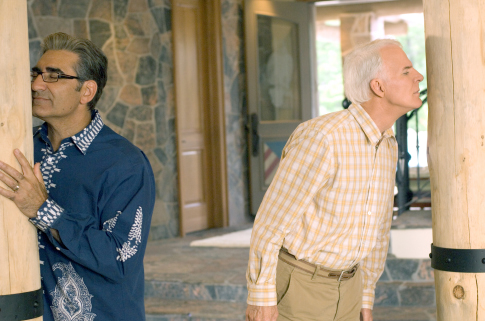 Two years after the events in the previous film, the Baker family begins to undergo many changes, beginning with Lorraine’s (Hilary Duff) high school graduation and her desire to study in New York. Their oldest daughter, Nora (Piper Perabo), is now married to Bud McNulty (Jonathan Bennett) and heavily pregnant with his child. They intend to move to Houston because of Bud’s new job promotion. 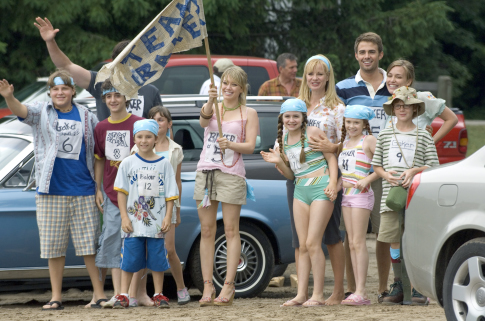 Feeling the family is breaking apart as the children grow up and move away, Tom (Steve Martin) persuades the entire family to take one last family vacation together at Lake Winnetka. Tom’s old rival, Jimmy Murtaugh (Eugene Levy), his trophy third wife, Sarina (Carmen Electra), and his eight kids are also there for the summer. Jimmy constantly flaunts his wealth and success to Tom, as well as the accomplishments of his children, often suggesting to Tom that his children are less successful because of Tom’s parenting style. The Baker kids get into many incidents, several of which are accidental: at a fancy party, Mark (Forrest Landis) is given community service for accidentally setting off a backpack of fireworks that is thrown into a boat, igniting its engine and causing it to explode; Sarah (Alyson Stoner) is caught shoplifting makeup from a gift shop, and Mark, along with Kenny Murtaugh, crashes into a tennis court with a golf cart. 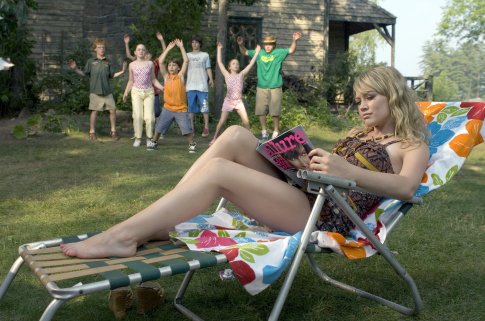 Jimmy again mentions that Tom needs to use a firmer hand on his kids. Tom is angered by this, and they decide to settle the matter at the Annual Labor Day Family Cup. Tom trains the kids for days, not realizing they are miserable. Sarah and Elliot Murtaugh (Taylor Lautner) go on a movie date to watch Ice Age, but are spied on by their fathers. The two men argue and end up humiliating their children. Upon returning home, Sarah is furious and refuses to compete for her father in the “stupid cup”. Everyone, including Kate, is angry with Tom, not only for spying on Sarah, but also for ruining the entire trip through his competitiveness. 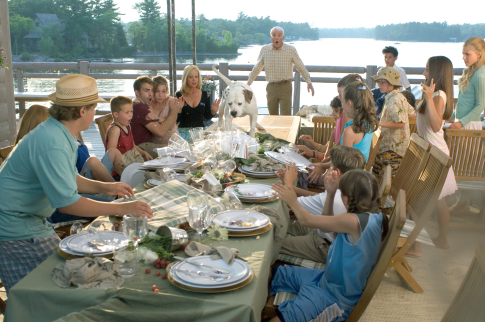 The next morning, Tom goes to the Cup to compete, taking Nigel and Kyle, the only two still willing to go. However, after discovering an old “Team Baker” flag thanks to a well-known old “rival” rat of the family known as “The Chiseler”‘s theft, Kate and the rest of the family show up, showing they have forgiven Tom and are willing to compete. Unfortunately, after all the events, the Bakers and the Murtaughs are tied for first; a tiebreaking canoe race is announced, in which every family member must compete. At first, Tom kindly decides to forfeit for Nora’s pregnancy, but Nora bravely decides to join in after Jimmy rebuffs Tom. During the race, Nora’s water breaks; the Murtaughs want to help, but Jimmy, sensing the opportunity to defeat Tom once and for all, initially and carelessly refuses to help. Eventually, the Murtaugh kids convince their father that they should help the Bakers as they jump out of their canoe one by one to join the Bakers so, the Bakers and the Murtaughs work together to get Nora quickly to the hospital as she goes into labor. Bud, Lorraine (soon to be christened as their baby’s future godmother), and Kate go with Nora in the delivery room, while Tom, Jimmy, Sarina, and the rest of the kids stay in the waiting room.

While talking to Jimmy, Tom realizes that he has to let his kids grow, but wherever they go, they will always be with him, and he will always be with them. Nora then gives birth to a baby boy. She and Bud name him Tom in honor of her father, who has shown them “there is no way to be a perfect parent, but a million ways to be a really good one.” Bud also announces that they have bought “The Big House”, the vacation home that the Bakers have been renting. Nora, Bud, and baby Tom leave for Houston three days later, Charlie (Tom Welling) and Anne Murtaugh (Jaime King) start a relationship as Charlie prepares to become a garage owner near Lake Winnetka and Anne decides to go to Madison Arts School to become an artist, and Sarah and Elliot start a relationship as well.

This film will give you laughs by the dozen. Steve Martin reprises his role as the Baker da and helps this film excel in being as good as the original. Eugene Levy is great as the competition. The children make this movie complete with a great ensemble. Hilary Duff shows she’s maturing. A good fun comedy. 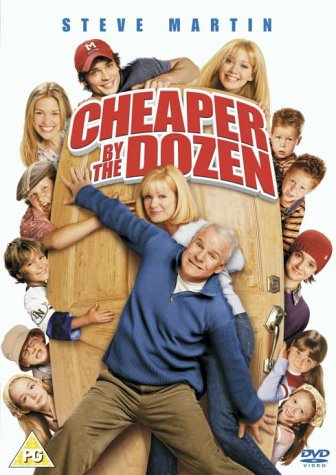 Tom Baker (Martin) is a football coach at a small rural college in Midland, Indiana, where he raised twelve children, and his wife, Kate (Hunt), has written about her life story in a book and hopes to send it to her friend to publish it. At the film’s beginning, Tom unexpectedly receives an offer from his old friend and football teammate, Shake McGuire (Richard Jenkins), to coach at his alma mater in Evanston, Illinois. Tom accepts the offer, and he and Kate begin making their plans on moving to Evanston. All twelve Baker children find out and demand the move be put to a vote, although Tom says it would not have any power. Tom loses the vote, even after he and Kate join, but goes ahead with the move anyway, claiming there will be more money and that they will be a “happier and stronger family”. However, the atmosphere at the Bakers’ new house is tense, and the situation at school for the children is even worse, although their new neighbors: the Shenks seem alright, especially the father, Bill and their first and only son, Dylan.

When her book is ready for publication, Kate is told that she must do a national book tour to promote it in New York for three days. Tom thinks that he will handle everything around the Bakers’ house while Kate is away, so he decides to hire his older child, Nora, and her boyfriend, Hank, to manage the children. When Nora arrives at her family’s house to manage them, the children plan to make Hank the target of their prank by soaking his underwear in meat and assisting their pet dog, Gunner, to attack him by chewing on his butt, prompting him to refuse to assist in baby-sitting since they know that he hates kids. As a result, Nora is angry at the children and later drives off with Hank, while Tom berates the children for their prank and cuts off their allowance within a month.

Shortly after Kate departs for her national book tour, Tom realizes that he cannot handle the children on his own after a chaotic night since Kate is told to stay for two more weeks. In reply to this revelation, Tom tries to hire a housekeeper, but nobody is willing to work with a family as large as his, so Tom decides to bring the football players from work into his house for game practicing in the living room to prepare for the Saturday night football game as the children perform chores and their household games. However, the children start causing trouble at school, in which Kyle and Nigel hurt their kindergarten teacher, Charlie and Lorraine continue suffering insults from teenage bullies without any violence involved, and the others stand-up against a group of bullies by fighting them for picking one of their own brothers, Mark and are both suspended from school for the fight after Mark and the others along with the bullies were sent to the principal’s office. Because of these incidents, Tom grounds the Baker children from any fun and games and forbids them all from going to Dylan’s birthday party, although they already have presents for him.Without Tom noticing them, the children sneak out of the house to give Dylan his presents and cause havoc at the party. While discussing the plays, Tom overhears party-goers screaming from Dylan’s house as one of the gifts turns out to be a Brazilian mud viper snake from Mark. Tom sends his players to retrieve his kids while he tries to retrieve his daughter, Sarah, but during a mess, he fails and the bounce house explodes. In all of the commotion, Dylan gets injured by Tom and is later sent to the hospital with a broken arm as his mother, Tina, coldly forbids the Baker kids from ever playing with Dylan ever again. Tom is forced to cancel the game after Shake advises him not to bring the players in his house or the children in the department again.

Kate overhears from the children about the chaos and cancels the book tour to take charge of the situation. Kate’s publisher decides to create an additional promotion for her book by inviting Oprah Winfrey to tape a segment about the Bakers in their home instead. However, Tom finds a letter in his mailbox revealing that Charlie got kicked off the football team as he berates Tom and storms out of the house to rejoin his girlfriend, Beth, back at Midland. Tom is even more shocked to discover Hank having returned and slept over with Nora at home. Despite much coaching from Kate, the Bakers are not able to demonstrate the loving, strongly bonded family that Kate described in her book. When Mark becomes upset that his pet frog, Beans, has died, which Sarah tells him that nobody cares and calls him Fedex once again, a heated fight erupts moments before the segment starts, leading the cameramen to tell Winfrey to cancel it. Afterwards, Mark runs away from home, prompting the Bakers to find him.Tom suspects that Mark is trying to run back to the Bakers’ old home, and eventually finds Mark on a train en route from Chicago to Midland. Reuniting with the rest of their family, the Bakers begin to address their issues with each other. After burying Beans in the garden and performing a kind of eulogy with the whole family there, Tom ultimately resigns from his position at his alma mater and settles for a less-time consuming job. The film ends at a Christmas dinner with the Bakers when the chandelier lamp breaks off and smashes.Directed by Shawn Levy (‘Just Married’ and ‘Big Fat Liar’), the film is not a bad one. It’s not a brilliant one either, but is warmly written, well-acted and contains many physical gags that children in particular will love. Ashton Kutcher is hilarious in the film as the self-obsessed boyfriend who claims he is hounded by the paparazzi for the single TV commercial he has starred in. All in all, it’s well worth a look