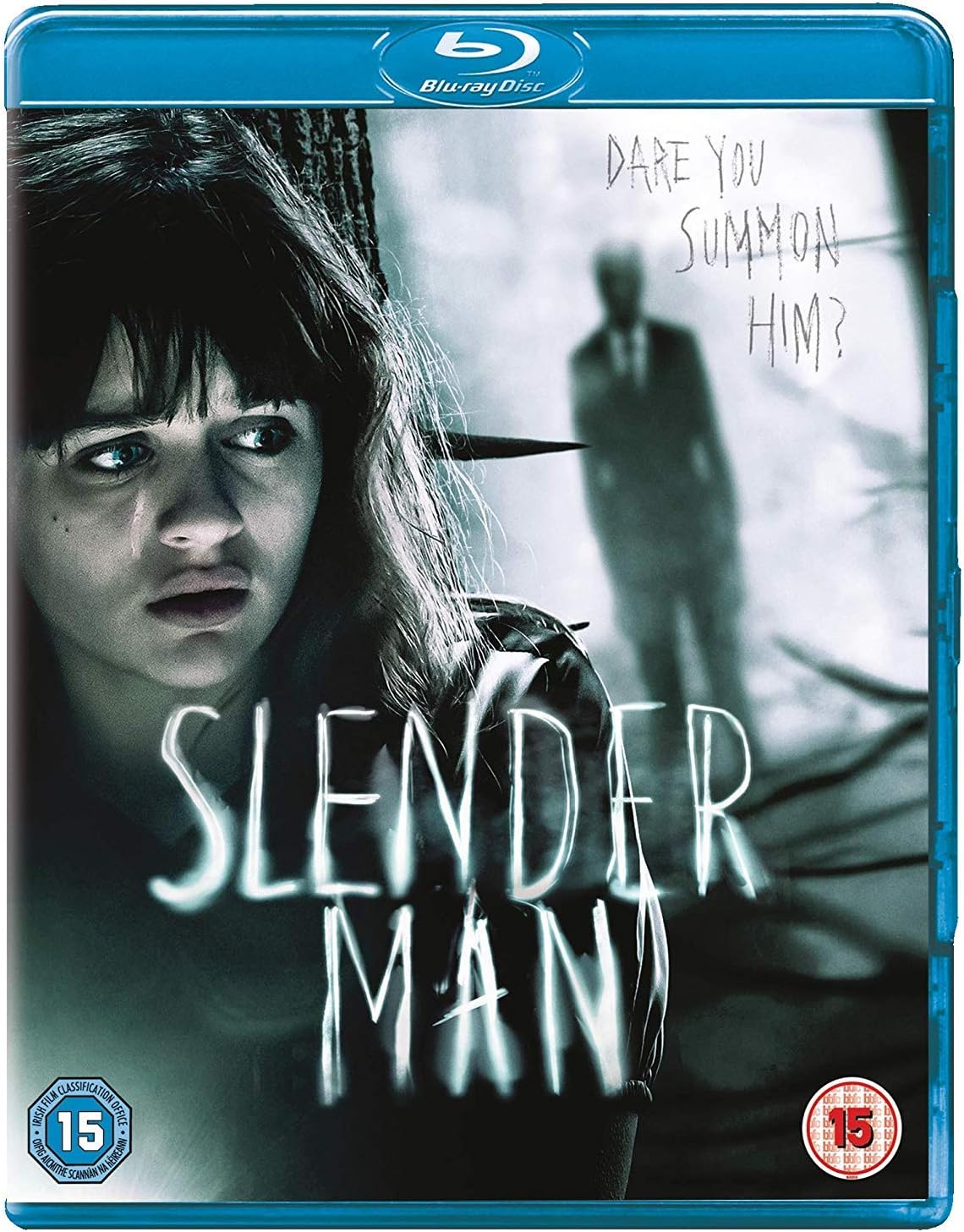 In a small town of Massachusetts high school, four best friends – Wren (Joey King), Hallie (Julia Goldani Telles), Chloe (Jaz Sinclair), and Katie (Annalise Basso) approach a group of guys to ask what they are doing that evening, but they tell the girls it’s top secret. Wren picks Hallie up that night to go to Katie’s house, along with Chloe. They hang out in her basement while her dad (Kevin Chapman) is passed out drunk. The girls then discuss that the guys are trying to summon the Slender Man (Javier Botet), a monster known through the internet that takes children. They find a video online to see how one can summon him. The girls close their eyes as they wait to hear the tolling of bells.A week later, the girls are on a field trip with their class to a cemetery when Katie suddenly becomes spooked by something in the trees. After a while, she disappears without a trace, and her whole class is left there for hours until the police show up to begin searching for her themselves. Hallie is in her room with her sister Lizzie (Taylor Richardson) when they hear a thumping sound coming from downstairs. They get frightened, and Hallie goes to check it out. It’s Katie’s dad, drunk and asking if Katie is with Hallie. He gets mad, accusing Hallie of getting Katie into some occult business, and he tries to attack Hallie. The police arrive, and Katie’s dad is arrested, just as Hallie’s parents are outside and her father is yelling at him.

Hallie goes with Wren and Chloe to Katie’s house to investigate. Wren distracts Katie’s dad while the other two sneak in from the back. They go into Katie’s room and take her laptop. After they leave, they look into the laptop and find videos of others that have encountered Slender Man. The girls read Katie’s messages and see that she was talking to someone with the handle “AleeyCat93”. Katie had been messaging her about how to deal with Slender Man. Hallie then talks to AleeyCat93 again to ask what they can do to get Katie back, and she responds that they must give up something they hold near and dear to them. 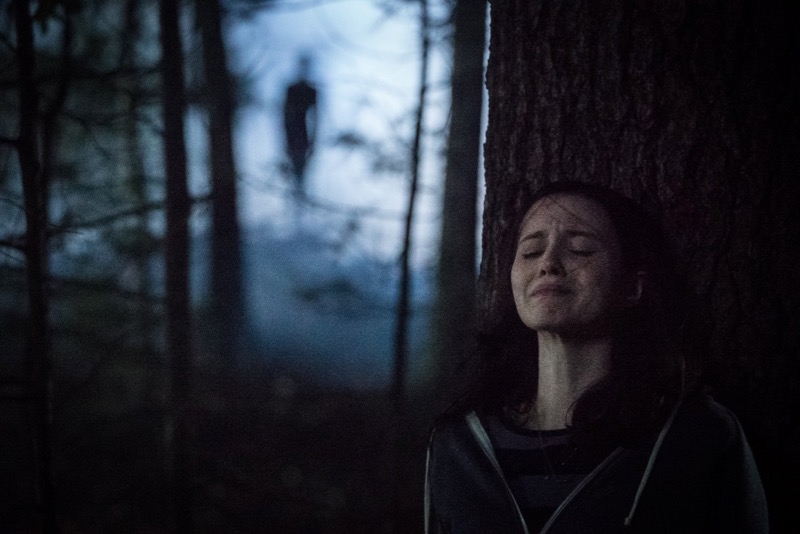 The girls go into the woods to give up personal items to Slender Man. Wren has been doing research on Slender Man, and she tells the other two to put on blindfolds and to not take them off even if they hear something. Sure enough, Chloe takes hers off, and she runs off screaming when she thinks she hears Slender Man. She runs until she actually comes into contact with him. When Hallie and Wren find her, Chloe appears too calm and claims she just lost a shoe. Soon, Chloe stops coming to class. At home, she sees a video on her phone from the point-of-view of someone going through her house. Slender Man appears in her room and starts to choke her, but when she looks in the mirror, her own hands are on her throat. Wren and Hallie later visit Chloe’s house, and she her eyes appears sunken. She has gone mad because of Slender Man. 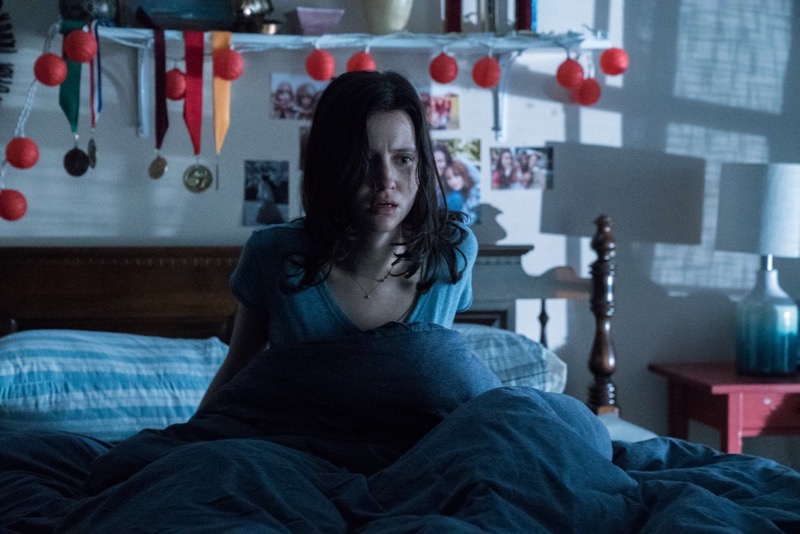 Wren goes to the library to try and find more information on Slender Man. The lights go out and she is alone. She turns on the flashlight on her phone and sees Slender Man lurking in the shadows. He goes near her and touches her, causing Wren’s face to disappear. She runs until she stumbles into one of the library employees, and she appears normal once more. Hallie is approached by her crush Tom (Alex Fitzalan) to see if she wants to hang out. While he talks to her, Hallie thinks she sees Slender Man in the bushes. Wren and Hallie have an argument over Hallie hanging out with Tom and avoiding their Slender Man issue. Hallie goes to Tom’s house that night where they try to hook up, but Hallie gets freaked out by nightmarish visions of Slender Man. At Hallie’s house, Lizzie suffers a major panic attack and is hospitalized. She yells to Hallie “He has no face!”, meaning she has seen Slender Man as well. Hallie looks into Lizzie’s laptop and sees that Wren took her into the woods to make contact with Slender Man.

Hallie goes to Wren’s house to confront her. The door is open so she goes up to Wren’s room and finds a bunch of information that she gathered on Slender Man’s victims. One of them that was driven insane was named Allison Riley – AleeyCat93. Hallie finds Wren about to jump out the window, but Hallie pulls her back inside. Wren feels guilty for what happened to Lizzie, but she tells Hallie that Lizzie came to her with interest in Slender Man. Wren tells Hallie that he doesn’t want their stuff, he wants them. Slender Man then pulls Wren through her window with his tentacles. Hallie runs into the woods to face Slender Man herself. When she sees the creature, she tells him to take her so that Lizzie can be okay. Slender Man tries to grab her, but she runs for it. He uses his tentacles to move around like a spider before he grabs Hallie and pulls her toward him. He starts to turn into a tree, and Hallie becomes fused to the tree until there is nothing left of her. Lizzie wakes up in the hospital screaming for Hallie. She is left to reflect on what has happened to her sister and her friends. 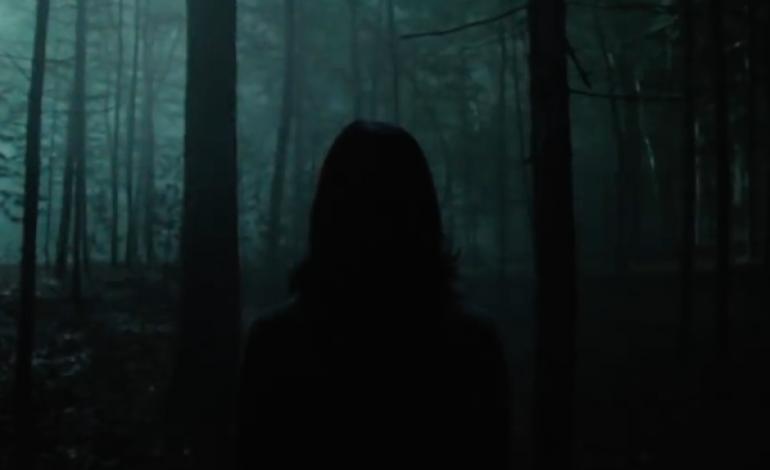 Slender Man is okay. Basic formula you’ve seen before in these cheap horror movies. It’s not scary, nor is it bad enough to be enjoyable in that sense. Surprisingly some of the cinematography looks good and there’s some interesting surrealist moments, but the acting is okay at best and the dialogue is sometimes quite cringey. “Scares” are mostly just jump scares and a lot of the scenes felt the same.

The source material is hard enough to work with so those familiar with Slendy’s origins will find this strangely adapted. Slender works more for creepypastas and video games, not so much cinematically. Far from the worst horror movie made, but definitely disappointing, although what would you expect from a Slender Man movie coming out in 2018? Some will hate this movie because of how bland it is, and I could totally understand that, but from a more objective perspective, it’s a functional film that lacks spirit.