Willie T. Stokes (Billy Bob Thornton) and his dwarfed assistant Marcus (Tony Cox) are professional thieves. Every year, Willie disguises himself as a department store Santa Claus and Marcus disguises himself as an elf in order for both of them to rob shopping malls blind at night. Willie is an alcoholic, a sex addict, and is gradually unable to perform his Santa duties appropriately with children, much to Marcus’ dismay. When they are hired at the fictional Saguaro Square Mall in Phoenix, the vulgar remarks made by Willie shock the prudish mall manager Bob Chipeska (John Ritter), who brings it to the attention of security chief Gin Slagel (Bernie Mac).

At the mall, Willie is visited by Thurman Merman (Brett Kelly), a friendly but exceedingly naive and gullible, overweight boy who thinks Willie is really Santa. The boy is a target of taunt and torment from a skateboarding gang. At a bar, Willie meets Sue (Lauren Graham), a woman with a Santa Claus fetish, and they begin a sexual relationship. Willie is harassed by a man in the bar, but Thurman intervenes. Willie gives Thurman a ride home, then enters the boy’s house where he lives with his senile grandmother (Cloris Leachman). Thurman reveals that his mother died, and his father, Roger, is away “exploring mountains” (meaning he is actually in jail for embezzlement) until next year. Willie tricks Thurman into letting him steal from the house safe and steals a BMW owned by Thurman’s father. Bob informs Gin that he overheard Willie having sex with a woman in a mall dressing room; Gin starts to investigate. Willie goes to his motel room and sees it being raided, causing him to take advantage of Thurman’s naivete and live in his house. The next day, Marcus gets angry at Willie for taking advantage of Thurman, stating his disapproval of Willie’s sex addiction.

Gin’s investigation of Willie includes visiting Thurman’s imprisoned father, who reveals that Willie is staying with Thurman illegally. He confronts Willie at the mall, and takes him and Marcus to a bar. There, he reveals that he has figured out their plan, blackmailing them for half of the cut to keep silent.
Willie attempts to commit suicide by inhaling vehicle exhaust fumes. He gives Thurman a letter to give to the police, confessing all his misdeeds. Willie notices Thurman’s black eye, which persuades him to make an example of the skateboarding bully. A renewed sense of purpose for Willie has him attempt to train Thurman in boxing. Enraged at Gin for blackmailing him, Marcus and his wife Lois (Lauren Tom) set up a trap for Gin, feigning needing a jump start for their vehicle from Gin’s. Lois hits Gin with the car, then Marcus kills him. On Christmas Eve, when the heist is almost complete, Willie goes to get Thurman a pink stuffed elephant that he had wanted for Christmas. Just as he gets the elephant, Marcus reveals to Willie that he intends to kill him, fed up with his increasing carelessness. Lois tells him to hurry up and kill Willie so they can get away with the money and merchandise. But just as Marcus is about to shoot Willie, the police swarm the trio, tipped off by the letter Willie gave to Thurman. When Marcus opens fire, the police shoot at him and Willie flees. Determined to give Thurman his present, he leads the police on a chase to Thurman’s house, ignoring orders to freeze. He is repeatedly shot on Thurman’s porch, but survives.
The epilogue is told through a letter from Willie, who is in a hospital recovering. He expresses his gratitude for Thurman in giving the letter to the police and his name was cleared of unarmed robbery. Shooting an unarmed Santa embarrassed the police, and Sue is granted guardianship over Thurman and his house until Thurman’s father, Roger, is released. Willie also explains that Marcus (identified as Santa’s Little Helper) and Lois are serving time behind bars for their actions, while expressing hope Roger is wise to avoid the two. The movie ends with Thurman finally standing up to his bully by kicking him in the crotch causing him to fall to the ground. Thurman is seen riding his bike away flipping off the bully.

Bad Santa is not a film for those easily offended, however it does manage to be genuinely funny, and makes a welcome diversion for adults. 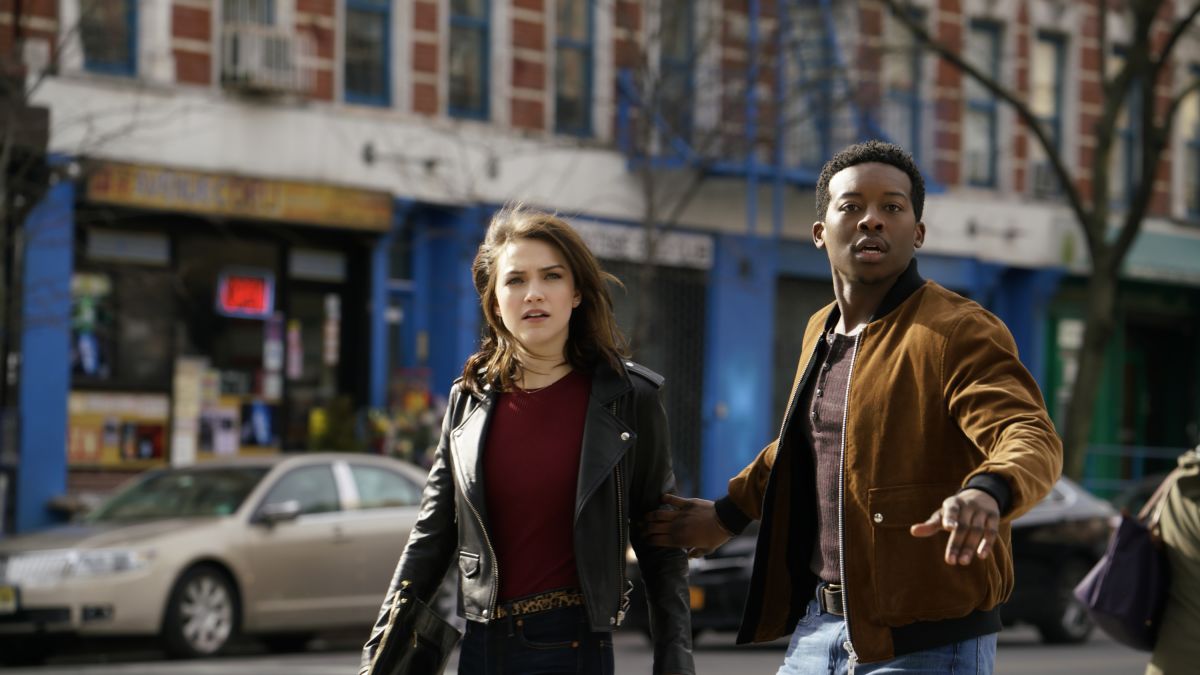 At first blush, “God Friended Me” is an easy target for mockery. Its title promises something wacky and miraculous, with a bonus social- media tie-in for relevance. In actuality, the new CBS drama is almost too earnest to ridicule, wrapping its absurd premise with the kind of moralistic sincerity that has fueled broadcast network dramas for decades. It’s “Touched by an Angel” re-imagined for the millennial generation. 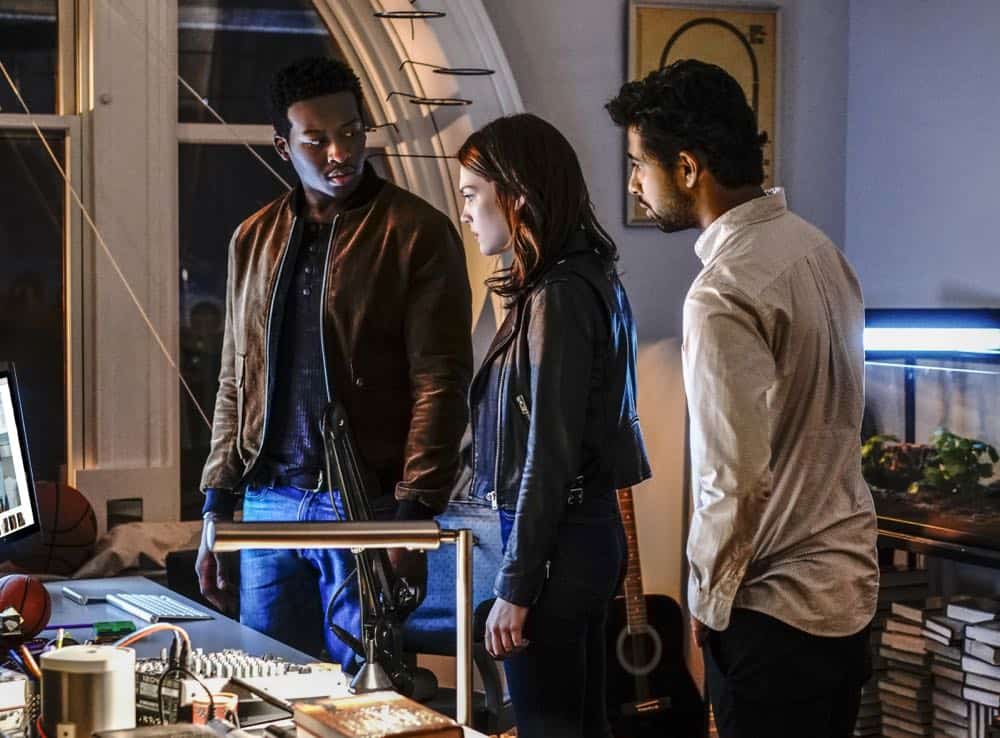 When a mysterious “God” Facebook account friends skeptical atheist Miles (Brandon Micheal Hall) out of nowhere, he’s shaken to find that it seems to anticipate the future by encouraging him to help people who need it, whether they know it or not. Complicating matters is the fact that Miles is also trying to sell a podcast about atheism in which he’d challenge people of faith on their views. This was complex enough before, especially since Miles’ father (Joe Morton) is a reverend who can’t understand his son’s insistence on preaching a lack of gospel. But now, with this seemingly all-knowing Facebook account watching and trying to dictate his every move, Miles finds himself more confused than ever. In the attempt to flesh out Miles and his twenty-something world, creators Steven Lilien and Bryan Wynbrandt throw in as many millennial buzzwords as they can. Miles’s co-worker and best friend Rakesh (Suraj Sharma) complains about dating apps, insisting that “no one uses Tinder anymore” with a knowing eye roll on a show that nevertheless insists twenty-somethings are still avid users of Facebook. Miles is trying to sell his podcast to SiriusXM under the moniker “The Millennial Prophet.” And by the time the God account points him in the direction of Cara (Violett Beane), a writer who hasn’t turned in one of her signature viral think pieces for six weeks but somehow maintains a corner office, the show has itself a whole grab bag of millennial clichés that never add up to anything especially believable.It’s telling that even on a series featuring a possibly omniscient being nudging people to do good through the insidious act of suggesting friends on Facebook, the most confusing aspect of “God Friended Me” is the question of who, exactly, it’s for. God Friended Me is able to  convince viewers to get past its premise and develop the wholehearted drama fueling it, which helps the series find its way. with a second season ordered it will interesting where the show will go.

Ramu Gupta (Jimi Mistry), a dance teacher, leaves his native city Delhi, India, to seek his fortune in the United States. He is lured by the exaggerations of his cousin, Vijay, who has already moved to New York City. Vijay’s deception is the first of several that drive the plot. 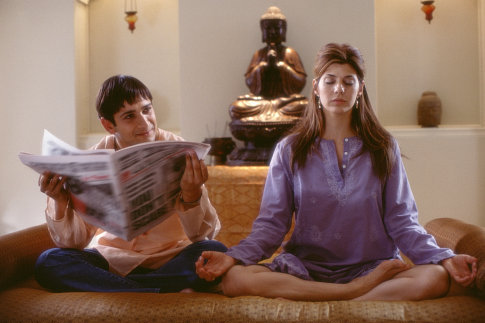 Seeking work as an actor, the naïve Ramu unknowingly lands a role in a pornographic film. That evening he accompanies Vijay and his roommates on a catering job at a society birthday party. When the Indian swami hired to address the party falls into drunken oblivion, Ramu takes his place. Lacking a real philosophy, he improvises by repeating advice he had been given by Sharonna (Heather Graham), an adult film actress he met earlier.

Lexi (Marisa Tomei), the birthday girl, is so impressed that she promotes him as a New Age sex guru to her friends. Ramu hires Sharonna, ostensibly for advice on how to be an actor in adult films, though what he really wants is more ideas he could use in his new role as the guru of sex. A personal relationship develops between the two, though Sharonna is engaged to a firefighter who thinks she’s a school teacher. Complications ensue from these and other deceptions.

A very funny & intelligent movie that spoofs all stereotypes, American as well as Asian. A real good hearted, feel good movie with some wise insights into peoples’ foibles 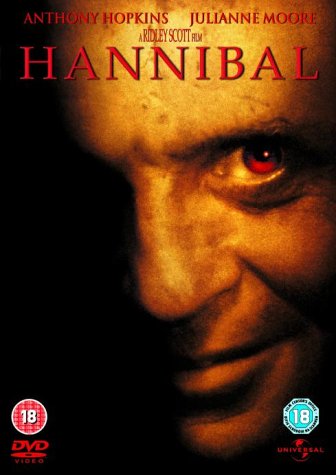 When Thomas Harris’s follow-up to “Silence of the Lambs” was announced, it was obvious that the filmed version would be soon announced. Yet, the pieces didn’t fall into place quite as easily as those involved would have hoped. Anthony Hopkins was in, but Jodie Foster was in and out and in, then out again – instead, she chose to direct her own feature and Julianne Moore was brought in. Original “Silence” director Jonathan Demme passed, so producer Dino De Laurentis (who was working on “U-571”) went a short distance to the “Gladiator” set, where director Ridley Scott said yes to the film. The screenplay was credited to two of the most highly regarded screenwriters in the business, Steven Zaillian and David Mamet, although apparently, Mamet’s work did not end up in the final draft – he received credit due to guild regulations.Although the final feature met with mixed reactions, it was a suprising success in this era of crackdowns on the “R” rating. Scott’s picture is a different creature altogether; a horror film wrapped in grand elegance. Scott brought two “Gladiator” collaborators to the party – cinematographer John Mathieson and editor Petro Scalia, and both do excellent work. The movie is also different in terms of set-up; where Clarice was the main character in “Silence”, she becomes a supporting figure here. As Hannibal himself has been let free, the story focuses on him instead. After Clarice (Moore) is demoted (her basement lab looks like Mulder’s from “The X-Files”, while Moore reminded me of Scully at times during the early scenes) after a botched drug bust, we are launched into the main story.

A previous victim of Lecter who has escaped, Mason Verger (an uncredited Gary Oldman), wants revenge on Lecter. It’s Lecter himself though, that invites Clarice back into the game. The original picture had Lecter being simply evil, while here has gotten himself back out into the world – living in Florence, Italy he has become an art curator and occasionally stops off for a coffee. Yet, there’s another individual on the hunt already in the neighborhood. An Italian detective named Pazzi (Giancarlo Giannini) wants the reward for Hannibal’s capture, which turns out to be a predictably bad idea. Even though the result of his chase seems rather obvious, I’ll give Scott credit for maintaining a respectable amount of tension throughout these scenes.Also, I’ll give Scott credit for a terrific first half. The picture was not exactly what I’d been expecting from it; although there is some definite violence early in the picture, the film maintains a fine level of tension.

The performances are generally excellent. Moore’s ability and range are once again remarkable, allowing herself to convincingly become a dark and lonely character – she does everything she can with a character that is less involved this time around. Hopkins is, as usual, an engaging villian who, now unleashed into the world, plans out his crimes, allowing the tension to build as to whether or not he’s going to go after his persuers.

The film is impressive, with stunning cinematography, amazing production design, great editing and a typically great score from Hans Zimmer.  Hannibal is a fine sequel to the Silence of the Lambs and is a must see for any Hannibal fans