Nicole Barlow is finalizing preparations for her mother’s funeral at her childhood home in San Pedro, California. Her sister, Annie does not want to attend, reminding Nicole of the way their mother used to treat them. Nicole tries to contact her cousin, Liz and her daughter Eva via video call. After losing the connection, Nicole sees an open door, leading into a dark room and walks inside. Annie arrives, having been informed that Nicole is missing, and finds Nicole’s phone along with a photo. That night, she awakens from a bad dream and finds a photo of two pregnant women—her mother and a woman in a floral dress. The next day, Annie attends her mother’s funeral, and it is shown that Annie has one blue eye and one green eye, but her mother didn’t.After the funeral, Annie meets Liz and Eva, and the three return to Annie’s mother’s house. Later, Annie dreams of a shirtless man crying, and, while she sleeps, her phone shows a map, pinpointing an address. When Annie awakens and sees a figure in the hall, she enters Liz’s room and finds her bed empty. An unseen force tries to attack Annie, but she is able to escape the house with Eva. The police don’t believe Annie’s story, with one officer, Bill Creek, implying her guilt in the disappearances. In a motel, Annie notices the address on her phone, finding a blurred picture of a figure in a floral dress. That night, she dreams of the crying man again, as well as a decapitated woman in a floral dress; still in the dream, Annie tries to flee from the room but the door slams shut.In the morning she wakes up, extremely agitated. Annie, accompanied by Bill Creek, return to her mother’s house where they discover a hidden room, one which Annie has absolutely no recollection of. When nobody else will take her seriously, she recruits her psychic friend, Stevie. Stevie, Annie, and Stevie’s protective brother Giles go to the house. In the hidden room, Stevie has a hysterical fit, repeating the name “Judas”. They then see the corpse of a woman in a floral dress floating above them, and Annie realizes that it is not her mother haunting the house. Outside, Giles blasts Annie for putting his sister Stevie in harm’s way. They have a brief altercation, and Giles angrily drives away with Stevie, leaving Annie all by herself. Researching Judas online, Annie finds a serial killer, dubbed the “Judas Killer”, who decapitated a woman in a floral dress, Jennifer Glick. Annie also discovers that her mother has a brother, and that both had connections with Glick.Creek investigates the house after finding a mysterious photo pointing to a cupboard, where there is a secret door leading into the hidden room. Creek is then murdered by an unknown assailant. Desperate for answers, Annie uses a makeshift Ouija board to contact Glick, who confirms her suspicions that Glick was murdered by her uncle, the Judas killer. Annie sees Judas come up from a secret hatch, and hides, discovering the bodies of Creek and Nicole. While Judas cries, Annie takes Creek’s gun but is overpowered by Judas and knocked unconscious. She awakens to find herself tied up and imprisoned in the closet, but manages to escape, stabbing Judas with a coat hanger. Before Judas can kill her, Glick’s spirit pulls her away, to Creek’s gun. Annie shoots Judas, killing him, noting that he has heterochromia as well. In the aftermath, Annie is awarded custody of Nicole’s daughter, Eva. With Liz and Nicole dead, the house has been sold and is under renovations. In the final scene, which may or may not be a part of Annie’s dream, Judas’ eye opens, and he looks around.Most horror movies either insult the audience a little by over-explaining, or they leave many elements simply unexplained (which can be a plus too.) This one actually gives you all the clues you need to put it together and get the answers. Really, it’s all there – if you are observant, you don’t need the characters to spell it out for you. I found the characters and dialog very believable (for a horror film, of course.). A decent Horror and a must see for fans of Caity Lotz. 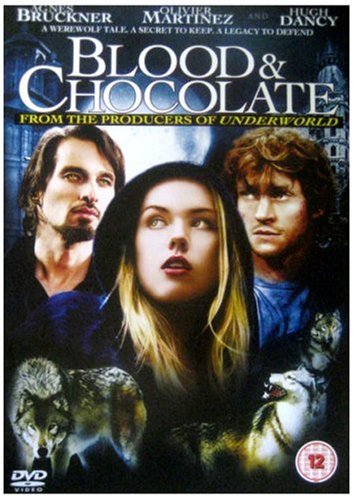 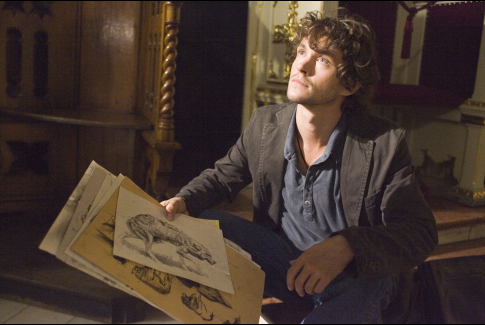 Vivian (Agnes Bruckner) is a nineteen-year-old werewolf born in Bucharest, Romania to American parents who then moved back to America. When Vivian was nine years old, her parents and two siblings were killed by two hunters who then proceeded to burn down their house. She then moved back to Bucharest to live with her aunt Astrid (Katja Riemann), who was the mate of the pack’s leader, Gabriel (Olivier Martinez) at that time. To Astrid’s distress, Gabriel left her after seven years in accordance with pack law to choose a new mate. The culmination of another seven years is only a few months away and Gabriel wants the reluctant Vivian as his. 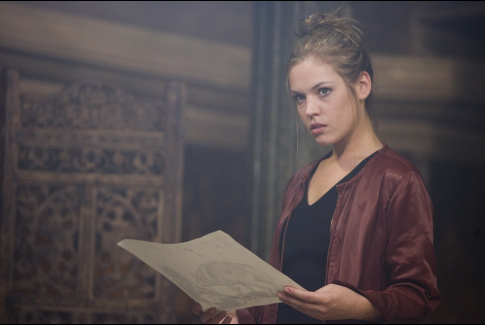 This is not, however, what she wants. She begins a romance with a graphic novelist Aiden (Hugh Dancy) who is researching for his latest book. Though he is human, he knows much about her kind, the Loups-Garoux (werewolves). Their romance is closely watched by her cousin Rafe (Bryan Dick) and his friends Ulf (Chris Geere), Gregor (Tom Harper), Finn (John Kerr), and Willem (Jack Wilson), together known as The Five. Believing that she is telling him all their secrets- as seen by a drawing he did of her and wolves because he knew her as “The Wolf Girl”- and may grow to be a danger to their pack, Rafe tells Gabriel of them. Gabriel then tells Rafe that Aiden must leave or he must be dealt with. 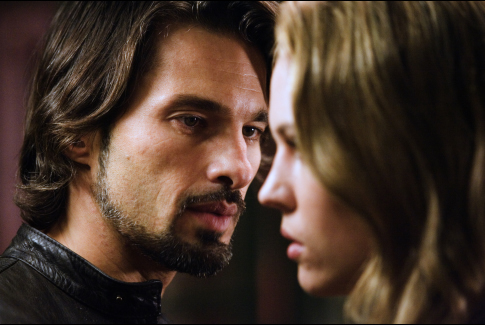 Rafe lures Aiden to an abandoned church with the ruse that Vivian wanting to reconnect and attempts to scare him away. When this doesn’t work, Rafe attacks and underestimates Aiden who defends himself and forces him back into a table where he cuts himself. Aiden, who did not know prior what Vivian and her friends were, sees the golden glow of the Loups-Garoux and realizes what he’s been dating. The two fight, with Aiden attacking Rafe with a silver pendant and Rafe turning to a wolf, until Aiden eventually gains the upper hand and sends both over the rail, killing Rafe. 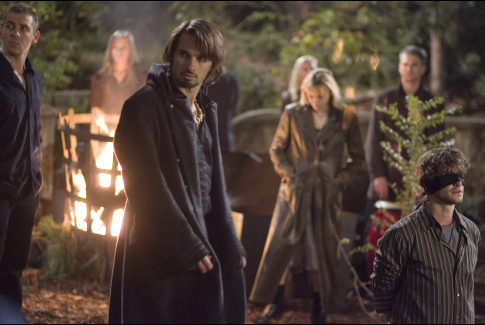 Afterwards, Aiden confronts Vivian about what she is, tempting her with his blood. She does not give in but is hurt that Aiden would think she was such a monster. Not long after, Aiden is captured by the pack to answer for killing Rafe, Gabriel’s son. He is made to run through the forest while being chased by the pack. If the pack catches him, he dies. If he makes it to the river and crosses it, he lives. Vivian is scared for him and changes into her wolf form, a white wolf, to save him from the rest of the pack. Aiden makes it to the river by confusing the pack, using his blood to spread his scent and make it harder for the pack to track him. Gabriel, however, is angry that Aiden made it to the river and attempts to follow him anyway, to kill him. Vivian helps to protect Aiden by throwing Gabriel off. Aiden, not realizing that the white wolf is Vivian, strikes her with a silver knife causing her to slowly die unless she gets an antidote. 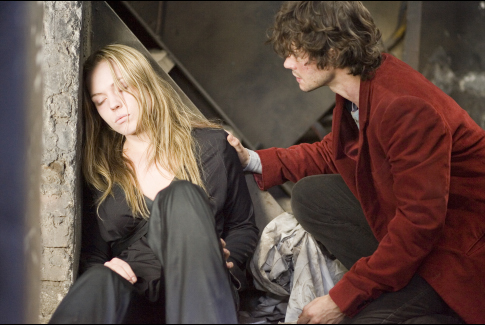 After hiding from the pack, Aiden and Vivian find the pharmacist who has the antidote for the silver poisoning and steals it from him, but not before he calls the rest of the pack. After being chased, Vivian tells Aiden to save himself and is captured by the pack. She is held in a cage and taunted by the rest of the five while Gabriel attempts to curve her to his way of thinking. Aiden comes to Vivian’s rescue and in the end Vivian has to kill Gabriel. 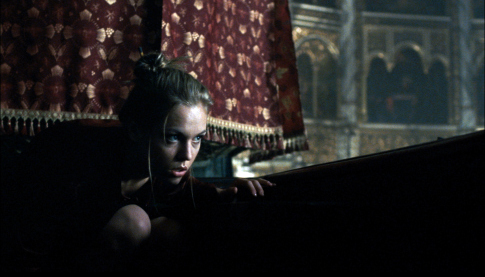 Aiden and Vivian go towards the age of hope. Driving past other Loups-Garous, the wolves are shown to bare their necks in respect to Vivian and Aiden, showing Vivian to possibly be the new leader of the pack. 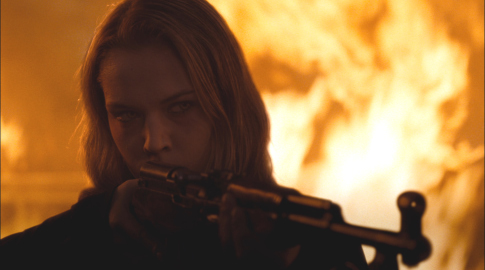 Not necessarily the most original plot or delivery but the locations in the film are stunning, the transformation into wolves (and use of real wolves) is simple and effective and the soundtrack wraps it all up together, creating a beautiful film in my opinion. If you like a love story mixed with the supernatural set in a gorgeous location then I would definitely recommend this film.