Genetic engineers Clive Nicoli (Adrien Brody) and Elsa Kast (Sarah Polley) hope to achieve fame by splicing animal DNA to create hybrids for medical use at the company N.E.R.D. (short for Nucleic Exchange Research and Development). Their work previously yielded Fred, a dog-sized vermiform creature intended as a mate for their female specimen, Ginger. After successfully mating them, Clive and Elsa plan to create a human-animal hybrid that could revolutionize science. Their employers Joan Chorot (Simona Maicanescu) of N.E.R.D. and William Barlow (David Hewlett) forbid them to do this. Instead, they are to find and extract proteins used for commercial drug production from Fred and Ginger. Clive and Elsa pursue their own agenda in secret. They develop a viable female creature (Abigail Chu).

Although they had planned to terminate the hybrid before it reached full term, Elsa persuades Clive to let it live. The hybrid subsequently becomes aggressive and stings Elsa several times. The hybrid sheds body parts in an effort to escape when they try to destroy her, but they subdue her. They discover that she is aging at a vastly accelerated rate. Elsa discovers that the creature is undergoing mental development such as that of a young human child. Elsa names the creature “Dren” after the creature spells out NERD, having seen the letters on Elsa’s shirt. Elsa subsequently refuses to let Clive refer to her as a “specimen”.

After moving Elsa to a new location for fear of discovery, they find Dren has a dangerously high fever. In an attempt to save her they place her in a large industrial sink full of cold water. Clive places a hand around Dren’s neck and pushes her under the water, seemingly drowning her. However, it is found that Dren is amphibious, though it is unclear whether Clive knew this, having analysed scans of Dren, or whether he did intend to kill her. While studying Dren, Elsa and Clive neglect their work with Fred and Ginger. At a highly publicized presentation of their work, Fred and Ginger savagely fight to the death. It is subsequently discovered that Ginger had spontaneously changed to a male, but Elsa and Clive failed to notice because they were focused on Dren.

Elsa forms a motherly bond with Dren. After Dren attacks Clive’s brother, Gavin (Brandon McGibbon), they move her to an isolated farm. There, Dren develops carnivorous tendencies and retractable wings. She grows into adolescence (Delphine Chanéac) and becomes bored with being locked up in the barn, but Elsa and Clive fear that letting her outside might lead to her discovery. Clive realizes that the human DNA used to make Dren was Elsa’s, not from an anonymous donor as Elsa had told him. When Dren assaults Elsa again, Elsa removes Dren’s stinger and uses it to synthesize the protein for which they had been searching. Dren seduces Clive; Elsa discovers them having sex in the barn and becomes upset. Clive accuses Elsa of never wanting a “normal” child because of her fear of losing control; instead she chose to raise one as an experiment, where control could be assured. Deciding the only solution is to terminate Dren, they return to the farm and find Dren already dying.

William Barlow discovers human DNA in Dren’s protein samples and arrives to investigate. Elsa tells Barlow that Dren is dead and buried behind the barn. However, a winged, male Dren rises from the grave and attacks the group, killing Barlow and Gavin, raping Elsa, and killing Clive before being himself killed by Elsa. Elsa is later informed that Dren’s body contained numerous biochemical compounds for which the company has begun filing patents. Joan offers Elsa, now visibly pregnant, a large sum of money, which Elsa accepts. 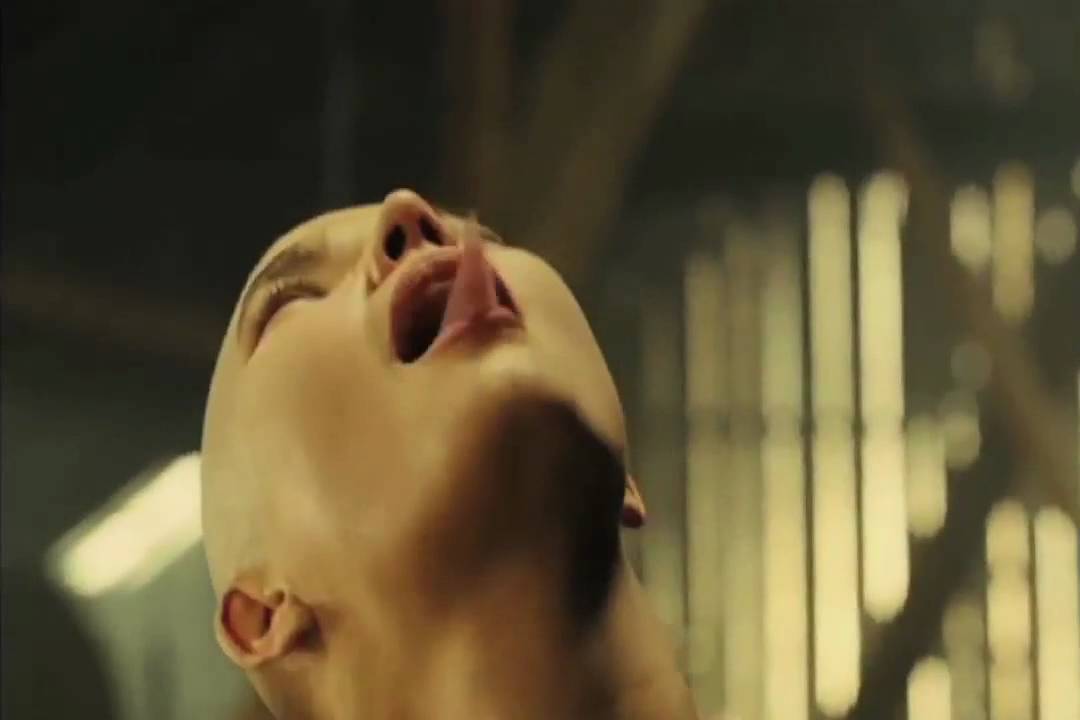 A refreshingly sick, in every sense of the word, ‘Splice’ is a film that pays homage to the likes of Cronenberg and Lynch – weird, wonderful, and intellectually disturbing 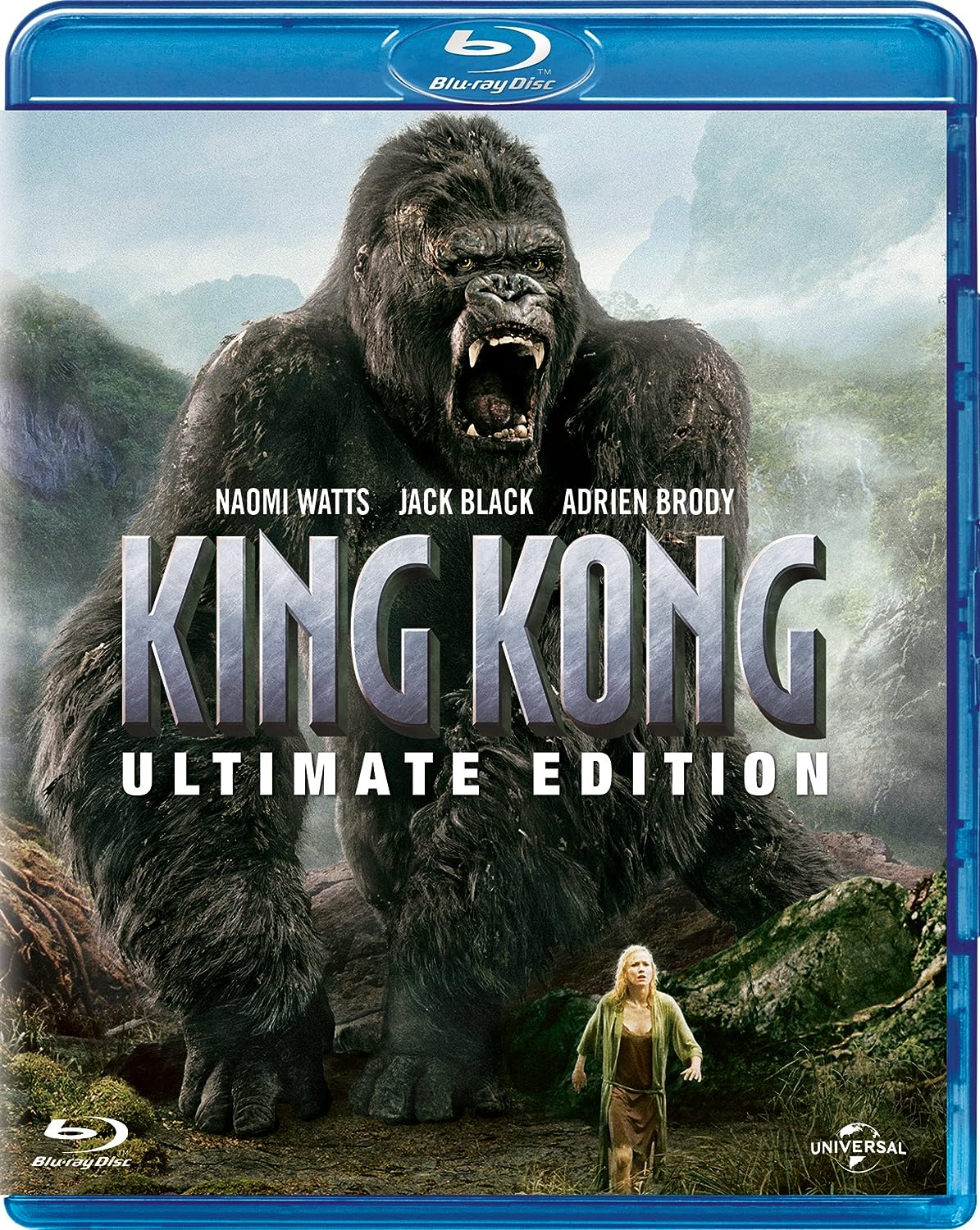 In 1933, at the height of the Great Depression, New York City vaudeville actress Ann Darrow has lost her job and is hired by financially troubled filmmaker Carl Denham to star in his new film. Ann signs on when she learns her favorite playwright, Jack Driscoll, is the screenwriter. As their tramp steamer, the SS Venture, makes the lengthy journey to the remote and mysterious Skull Island, Ann and Jack fall in love. Captain Englehorn begins having second thoughts about the voyage, prompted by crew speculation of trouble ahead.

Deep in the southern waters, the Venture receives a radio message informing Englehorn that there is a warrant out for Carl’s arrest due to his defiance of the studio’s orders to cease production. The message instructs Englehorn to divert to Rangoon, but despite his attempt to comply, the ship becomes lost in fog and runs aground on the rocky shore of Skull Island. Carl and his crew explore the island to film and are attacked by vicious natives. Mike, the sound technician and one of the sailors are killed. Ann screams as she is captured, and a loud roar is heard beyond the wall. The matriarch of the tribe vows to sacrifice her to “Kong”, a 25 ft (8 m) tall gorilla. Englehorn kills one of the natives and his crew break up the attack and return to the ship. They lighten their load to float off the rocks and carry out repairs, but Jack discovers Ann has been kidnapped by natives. On the island, Ann is offered as a sacrifice to Kong by the natives. The crew returns armed, but is too late as Kong takes Ann and flees into the jungle. Ann gradually wins Kong over with juggling and dancing, and eventually begins to grasp Kong’s intelligence and capacity for emotion. 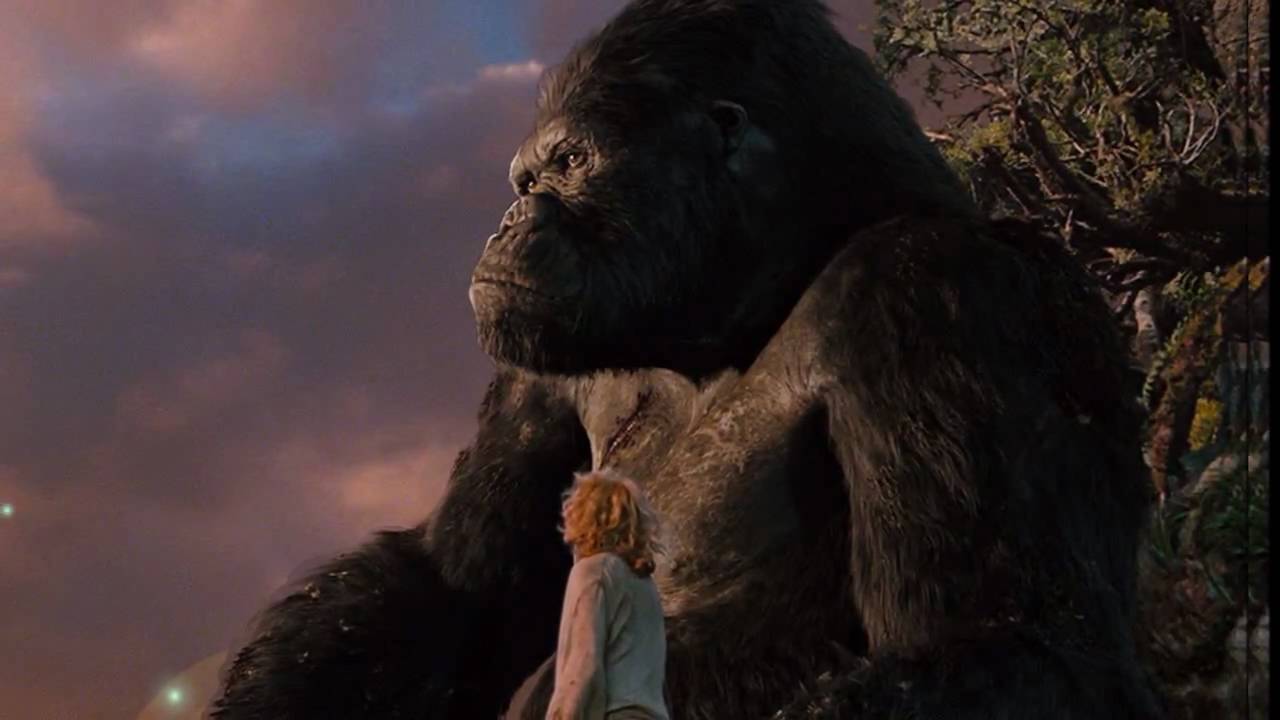 Englehorn organizes a rescue party led by First Mate Hayes and includes Jack Driscoll, Carl Denham, Jimmy, Bruce Baxter, Preston, Lumpy, Herb, Choy, and several sailors. The party barely gets outside of the walls before they run into a Ferructus that Hayes kills with his machine gun. The rescue party is then caught in the middle of a pack of Venatosaurus saevidicus hunting a herd of Brontosaurus baxteri, and Herb is killed along with four sailors. The rest of the rescue party come across a swamp where actor Bruce Baxter and two others leave the group. The rescue party makes their way across a giant fallen log, when Kong attacks the rescue party. Hayes, Choy and several other crewmen are killed after being thrown off the log by Kong to the bottom of the cliff, and the rest of the crew is shaken off the log into a ravine; Carl’s camera is destroyed as well. Kong returns to Ann and rescues her from three Vastatosaurus rex, killing them. Kong then takes her to his lair in the mountains. The remaining crew wakes up to find themselves in a pit full of giant insects where Lumpy and two others are killed. Englehorn, Baxter and the rest of the crew returns, and save the last four members of the rescue party (Jack, Carl, Jimmy, and Preston) from the pit. As Jack continues to search for Ann, Carl decides to capture Kong. Jack goes to Kong’s lair, inadvertently waking him. As Kong fights a swarm of flying Terapusmordax, bat-like rodents, Ann and Jack escape. They arrive at the wall with the angry Kong following them, and Ann becomes distraught by what Carl plans to do. Kong bursts through the gate and attempts to get her back, killing several sailors in the process, but is subdued when Carl knocks him out with chloroform.

Back in New York, Carl presents “Kong, the Eighth Wonder of the World” on Broadway, starring Baxter and an imprisoned Kong. Ann is played by an anonymous chorus girl, and Kong becomes enraged after realizing that the girl on stage is not Ann. After breaking free from his chrome-steel chains, he wrecks the theater. Kong wreaks havoc around the city and chases Jack in a taxi across town. He knocks him out by stopping his taxi and flipping it, then encounters Ann again. Kong and Ann share a moment on a frozen pond in Central Park until the army attacks. Kong climbs with Ann onto the top of the Empire State Building, where he fights off six F8C-5 Helldiver Navy planes, downing three. Kong is mortally wounded by the gunfire and gazes at Ann for the last time before falling from the building to his death. As Ann is reunited with Jack, civilians, photographers, police and soldiers gather around Kong’s corpse. Carl takes one last glimpse at him and says, “It wasn’t the airplanes. It was Beauty killed the Beast.”

Naomi Watts is fantastic in the Fay Wray role, as is Adrien Brody as her love interest. The beast itself and cinematography are simply astonishing (and any reservations about Black are swiftly pushed aside once the real star of the show emerges). It’s a film that manages to both capture the (romantic) essence of adventure movies from that era and succeed as a modern action adventure.