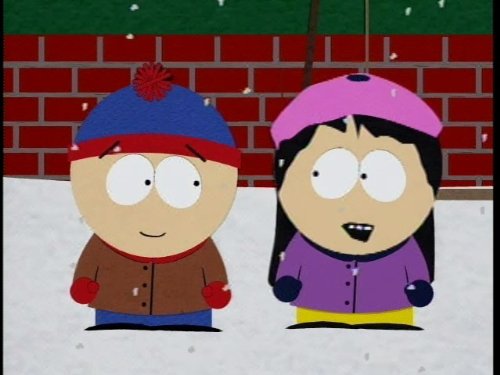 Kyle is playing Saint Joseph in the South Park Elementary School’s Christmas nativity play, but he is forced to quit when his mother hears of the play and expresses outrage that her Jewish son is being forced to participate in a Christian production. She demands that the religious elements be taken out of the public school, and threatens to take her case to the mayor. Kyle suggests he could sing the “Mr. Hankey, the Christmas Poo” song as a non-religious substitute, but his suggestion is rejected because nobody else believes in Mr. Hankey, a living and talking “Christmas poo”. Kyle leaves the school feeling lonely and excluded because he cannot celebrate Christmas with everyone else.

Mayor McDaniels decides that anything offensive to anyone will be removed from the Christmas celebrations, including Santa Claus, Christmas trees, wreaths, fairy lights, candy canes, mistletoe and the Star of Bethlehem. Kyle once again tries to suggest that they use Mr. Hankey as a non-religious Christmas icon since he does not discriminate against anyone. At home, Kyle is scolded by his parents for believing in Mr. Hankey. While Kyle is brushing his teeth, Mr. Hankey comes out of the toilet, spreading feces stains everywhere he goes, prompting Kyle’s parents to blame Kyle for the mess. Kyle decides he will bring Mr. Hankey to school to prove he is real, but this only causes more problems as Mr. Hankey disguises himself as an unadorned, dried-out piece of feces when he is around people who do not believe in him, leading Cartman to ask if carrying around boxes with feces in them is some kind of Jewish tradition. Mr. Hankey leaps at Cartman’s face as he sings “Kyle’s Mom is a Big Fat Bitch” in D Minor, and Kyle is blamed. He is sent to talk to guidance counselor, Mr. Mackey, but Kyle only gets into further trouble when Mr. Hankey takes a bath in Mr. Mackey’s coffee. Cartman, Stan and Kenny believe Kyle is insane and check him into a mental institution.

Like the whole town, the school Christmas pageant is stripped of all symbols of Christmas, and the children instead present a minimalist song and dance created by composer Philip Glass. The parents, astounded by how awful the pageant has turned out, begin blaming one another for destroying Christmas and a fight breaks out. When Chef finds out where Kyle is, he reveals to the children that Mr. Hankey does actually exist. When all the children start believing, Mr. Hankey finally reveals himself to everyone and scolds them for losing sight of the good things of Christmas and focusing on the bad. The townspeople release Kyle from the asylum and apologize, then they all sing Christmas songs and watch Mr. Hankey fly away with Santa Claus. Cartman, Stan, and Kyle feel that something is still missing. “THE END” then appears, and Kenny is excited and relieved that he has survived the entire episode without getting killed in spite of being involved in dangerous and life-threatening situations throughout. During the end credits, Jesus dejectedly sings, “Happy Birthday” to himself alone in his television studio.

Mr. Hankey, the Christmas Poo has been described as one of the classic episodes of South Park and its easy to see why it’s a classic Christmas episode that brings us an iconic character who wil lreturn in other holiday specials