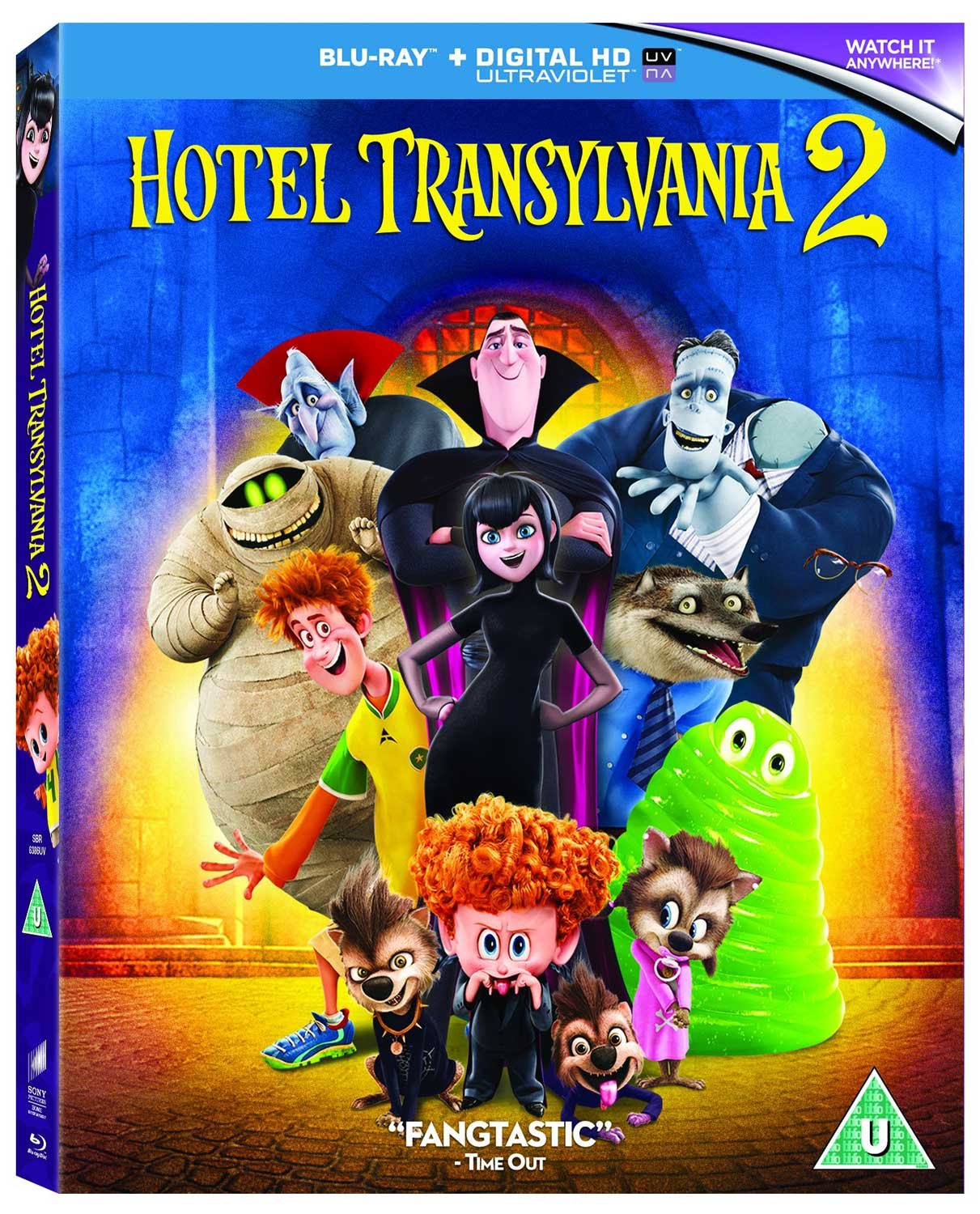 Seven years after the first film, Mavis and her new fiancé Johnny are finally married, with the approval of her father Dracula, and the world becomes aware of (and unfazed by) the existence of monsters. Mavis later reveals to Drac that she is pregnant and a year later, she gives birth to a baby boy named Dennis, who later befriends Wayne’s daughter Winnie. Nearing his fifth birthday, Dennis has yet to grow his fangs and Drac worries that his grandson might not gain vampire powers. Noticing the dangers of Transylvania, Mavis starts to consider raising Dennis where Johnny grew up, much to Drac’s disapproval.Drac tells Johnny (who does not want to leave the hotel either) to bring Mavis to California to visit his parents, Mike and Linda, but to make sure to keep her distracted so that she will not move, leaving Drac to “babysit” Dennis. Drac enlists his friends Frank, Wayne the Werewolf, Griffin the Invisible Man, Murray the Mummy, and Blobby the Blob to help train Dennis to become a monster, to no avail.Drac takes Dennis to his childhood summer camp, Camp Winnepacaca, where he learned to hone his vampire abilities and discovers that the camp is safer than it was when he went there. Drac stubbornly believes Dennis is a “late fanger”, so he hurls Dennis from a tall, unstable tower to pressure the boy’s transformation into a bat. Dennis does not transform, and Dracula has to fly and rescue him at the last second. The stunt is filmed by the campers and uploaded to the Internet, which eventually reaches Mavis and Johnny.Mavis angrily transforms into a bat to fly her and Johnny back to Transylvania. Drac and his friends reach the hotel a couple of seconds after Mavis. She confronts her father for putting Dennis in grave danger and his inability to accept that he is human. She states she will move out of the hotel after Dennis’ fifth birthday the following Wednesday. Drac hangs his head with deep guilt.Mavis invites Vlad, her grandfather and Drac’s father, to Dennis’ birthday party. As Vlad is much worse than he was when it comes to humans, Drac tells Johnny to have the human party-goers disguise themselves as monsters. Vlad receives the invitation and arrives with his monstrous bat-like servant Bela to meet his great-grandson for the first time. Meeting him, he believes that fear will cause Dennis’ fangs to sprout and possesses a stage performer dressed as Dennis’s favorite television monster, “Kakie the Cake Monster”, to scare Dennis, but Drac shields his grandson at the last moment and exposes the deception to Vlad, who is outraged that Drac has accepted humans as guests in his hotel. Drac confronts his father about how humans are different now. Mavis becomes upset with her grandfather’s behaviour.While the family argues, Dennis sadly flees the hotel and enters the forest with Winnie in tow, hiding in her treehouse. They are attacked by Bela, who mistakes Dennis for a human. When Bela injures Winnie and threatens to destroy the hotel, Dennis’ anger causes him to instantly grow his fangs and his vampire abilities manifest. He begins to fight Bela, who calls his giant-bat minions. Drac, Mavis, Dennis, Johnny, the rest of the monsters and Johnny’s family team up to defeat his minions. A livid Bela then attempts to kill Johnny himself with a stake. Having been won over by Drac’s claim that humans are harmless now, Vlad shrinks Bela and tells him never to bother his family again. Bela then flees. With Dennis having vampire abilities, Mavis and Johnny continue to raise him in Transylvania, and they resume the party with his friends.It is not as good as the original. But it is still very funny. And really shows Adam Sandler who has starred in some flops recently, still has his charm as Dracula.