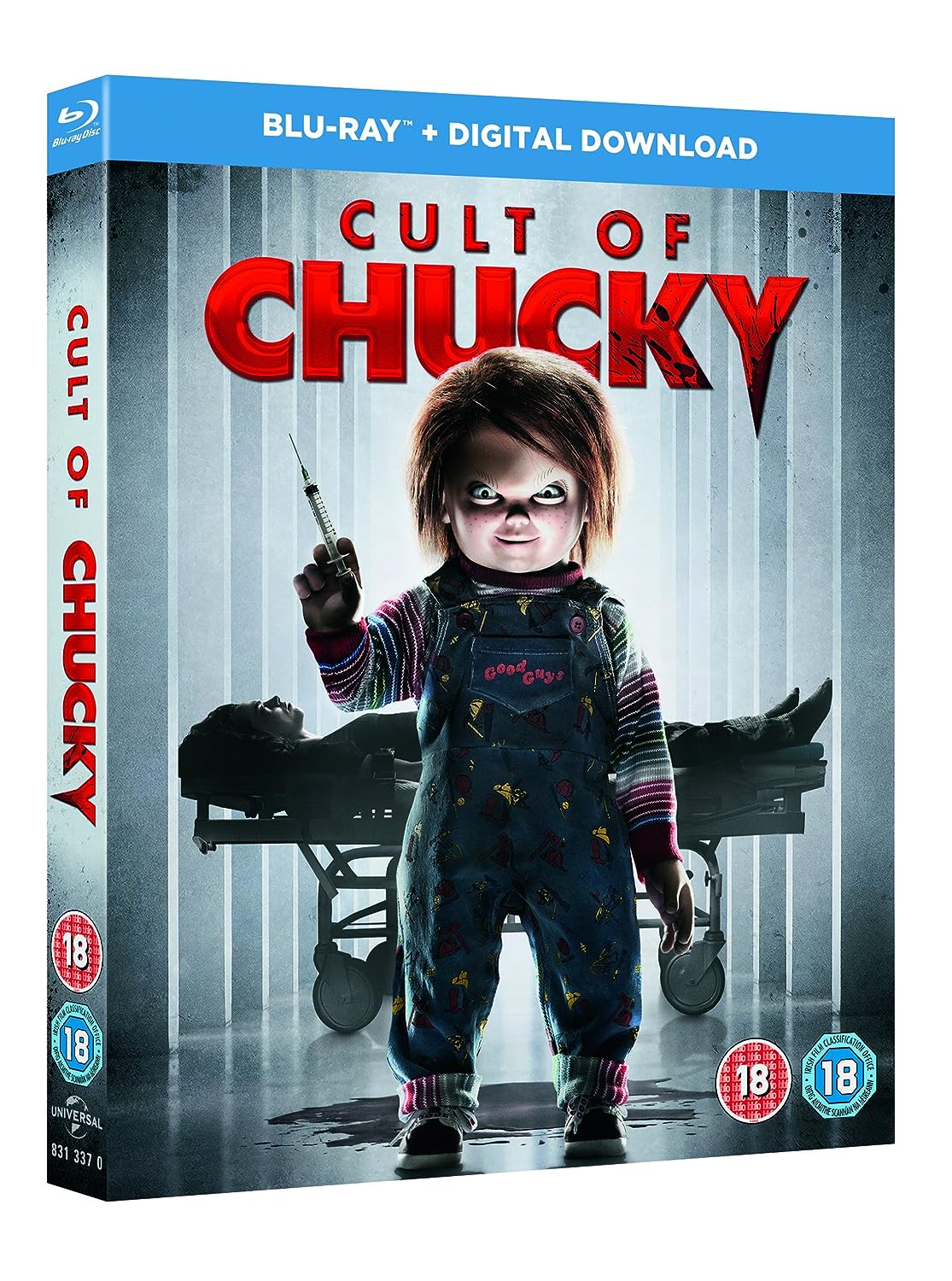 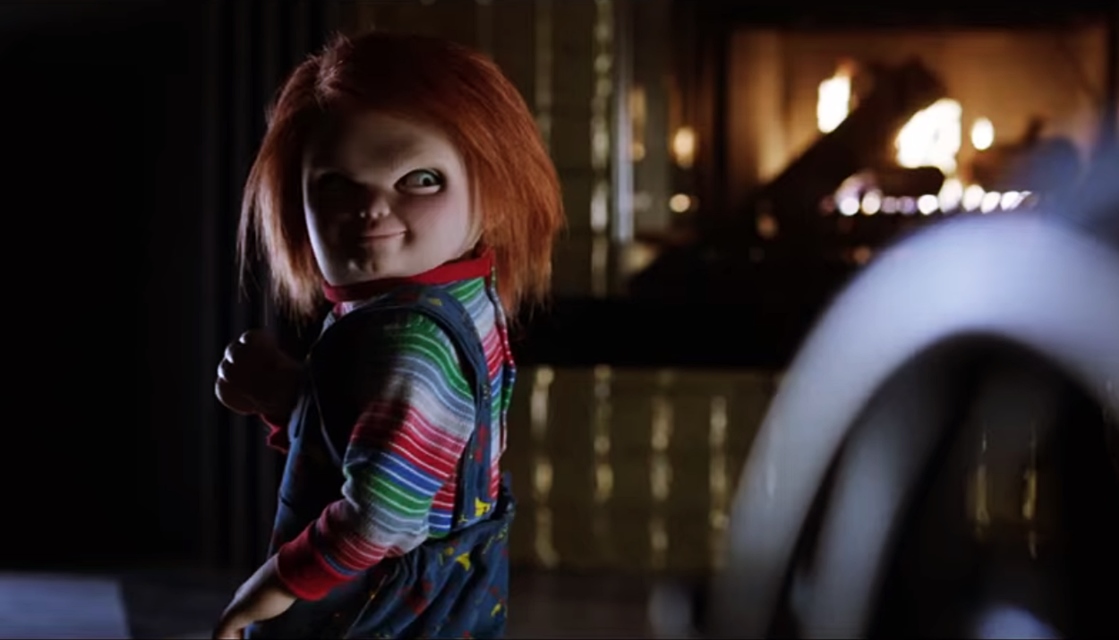 An adult Andy Barclay returns home after a bad date and is revealed to have the original Chucky’s head, which is still conscious and deformed after being repeatedly tortured by Andy in retribution for his crimes. Meanwhile, Nica Pierce has spent the past four years in a mental institution after being framed by Chucky for the murders of her family. After years of intense therapy, she now believes she was responsible for the murders and that Chucky was just a manifestation of her psychosis. As a result of her “breakthrough”, her doctor, Dr. Foley, has her transferred to a medium security mental institution. Andy presents Chucky’s severed head to Dr. Foley to convince him of Nica’s innocence, but he dismisses the head as “special effects”. 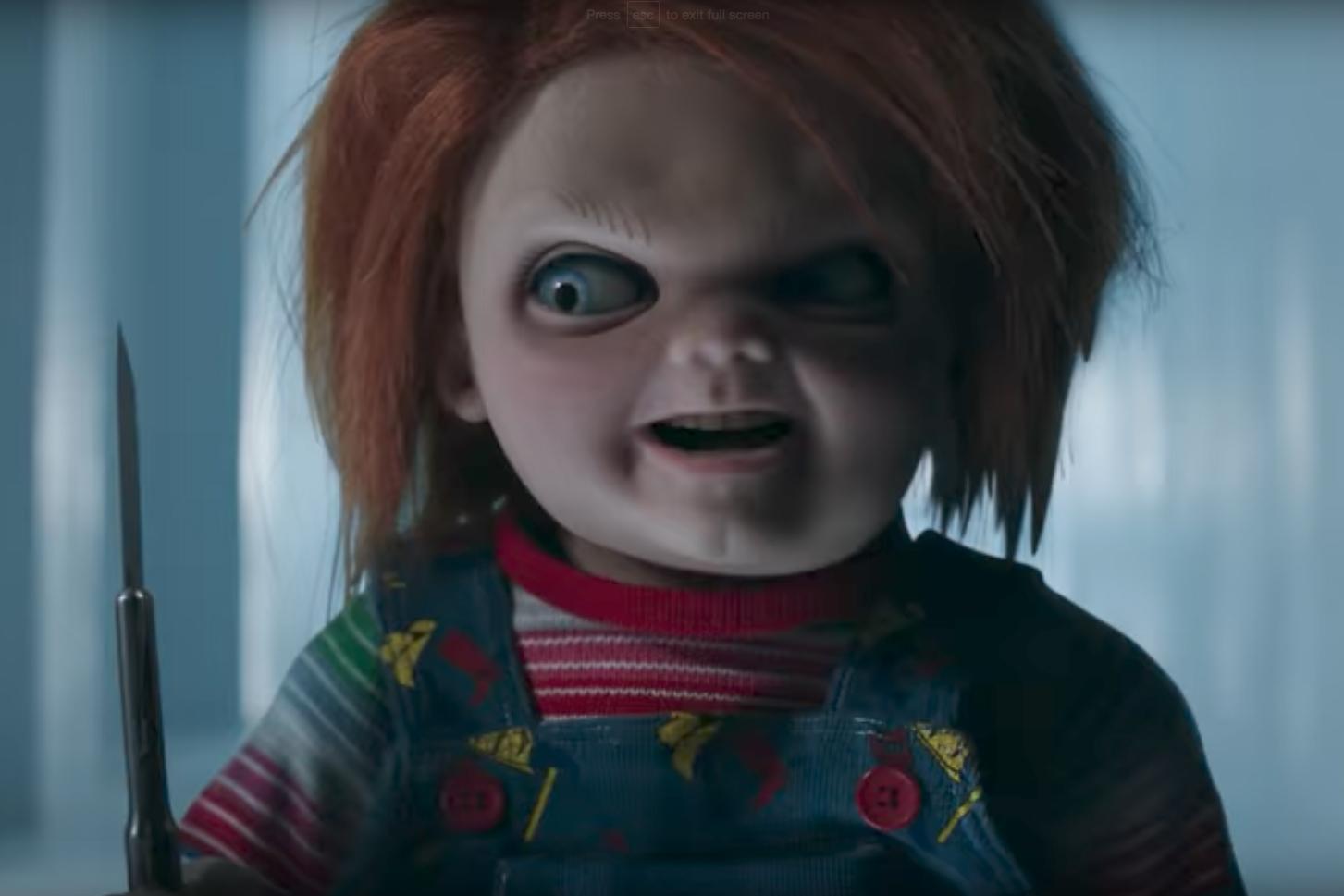 After arriving, Nica becomes part of a regular group therapy session, which is composed of Malcolm, a man with multiple identity disorder, Angela, an old woman who believes herself to be dead, Claire, a woman who burned her house down and Madeleine, a disturbed patient who smothered her infant son to death. Dr. Foley introduces a new therapy technique which involves a Good Guy doll to the group. Most of the patients are deeply unsettled by the doll except for Madeleine, who takes the doll and treats it as her baby.Nica is visited by Tiffany Valentine, who reveals that Nica’s niece, Alice, has died and leaves her a Good Guy doll, which she claims was a gift from Alice. That night, Chucky awakens and finds Nica only to discover that she had attempted suicide by slashing her wrists with one of the spokes of her wheelchair. The next morning, Nica awakens to find that her wrists have been stitched up and that a message stating “not so fast” has been left in a puddle of her blood. She then discovers that Angela has died, apparently of suicide after having her wrists cut and the message “Chucky did it” left in her blood.

Angela’s death leaves the group shaken and after realizing that Valentine was the last name of Charles Lee Ray’s girlfriend, Nica begins to believe that Chucky is real. Believing Madeleine is in danger, Nica has Michael pursue her out to the institution’s graveyard in order to warn her. However, Madeline throws both the doll and Michael into an empty grave. The orderlies rescue Michael, but it is heavily implied that Chucky has transferred his soul into his body. After Claire tries to get rid of the other doll, it bites her leaving Dr. Foley and the orderlies to believe that she is self-harming. Claire becomes hysterical and Dr. Foley and Carlos sedate her and strapping her to a Gurney. After Claire is left alone, one of the Chucky dolls kills her by smashing the skylight in the room and decapitating her with shards of broken glass.In a private session with Dr. Foley, Nica agrees to be hypnotized in order to regain any repressed memories about her involvement in the murders. While hypnotized, it is revealed that Foley has been sexually abusing Nica during their previous sessions. Foley is then hit from behind by Chucky with a glass bottle and offers Nica one of the shards to kill Foley, although she doesn’t go through with it. Foley believes Nica is the one who assaulted him but is willing to keep quiet in order to blackmail her for sexual favors. Meanwhile, Madeleine takes her Good Guy doll and smothers it with a pillow forcing her to confront the repercussions of her real child’s death. The orderlies bury the doll as a form of catharsis for Madeleine.Andy learns about the murders online and realizes that Chucky has somehow managed to transfer his soul into multiple bodies at once. He hatches a plan to end the carnage by sending a Good Guy doll to the facility with a gun inside, cutting its hair so he can tell the difference. Andy arrives at the institution and commits himself by assaulting one of the security guards. Madeleine is visited by her doll, who has risen from the grave and allows him to kill her so she can finally be with her baby again. Foley returns to his office and finds Nica tied in a straight jacket. He attempts to assault her again but is knocked out by one of the Chucky dolls. The other Chucky doll enters, and upon seeing the Good Guy doll Andy sent, awakens him. The three Chuckys reveal that the original Chucky found a voodoo spell on the Internet which allowed him to separate his soul from multiple host bodies. He then reveals that Alice was one of his hosts, but was killed after one of Chucky’s victims fought back against her. Carlos suddenly appears in Dr. Foley’s office and watches Nica surrounded by the three Chucky’s. All the dolls kill Carlos by stabbing him, cutting his stomach open with the broken glass bottle and stabbing him with a screwdriver as Nica looks on in horror. 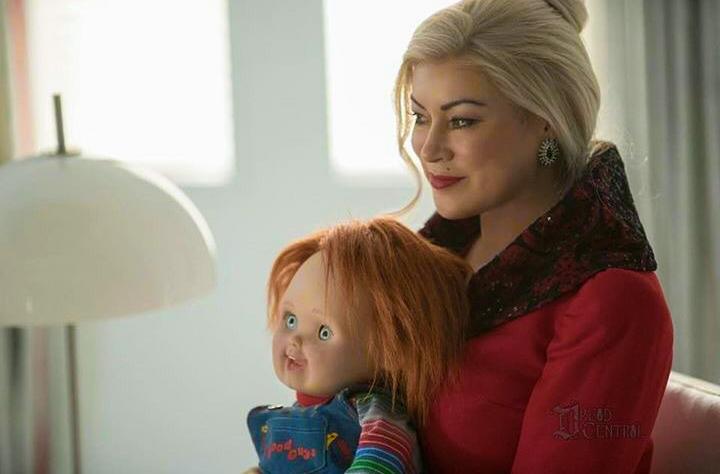 While the short-haired Chucky leaves to kill Andy, one of the other Chucky’s transfers his soul into Nica, granting her body the ability to walk, and stomps Foley’s skull in with the red high heels Foley had earlier placed on her, as retribution for his treatment of Nica. Chucky/Nica wanders the hospital and stumbles upon Michael who shows her the body Ashley claiming that he killed her. Chucky/Nica refuses his claim as he had never actually transferred his soul into his body. Michael breaks down and states that he takes on so many personalities as a way of trying to be someone who matters before being killed by Madeline’s Chucky who cuts through his skull with the screwdriver. The short-haired Chucky attacks Andy in his cell, but after a brief struggle Andy reaches into Chucky’s chest and pulls out the gun, and shoots the doll repeatedly before stomping its head. Andy attempts to shoot Chucky/Nica, but had wasted all of his ammo. The institution is sent into lockdown resulting in Andy being locked inside his cell, Madeline’s Chucky going into hiding, and Chucky/Nica escaping. Chucky/Nica reunites with Tiffany and kiss passionately before driving off together with the Tiffany doll, hinting that the eighth film might be revealed in the future. 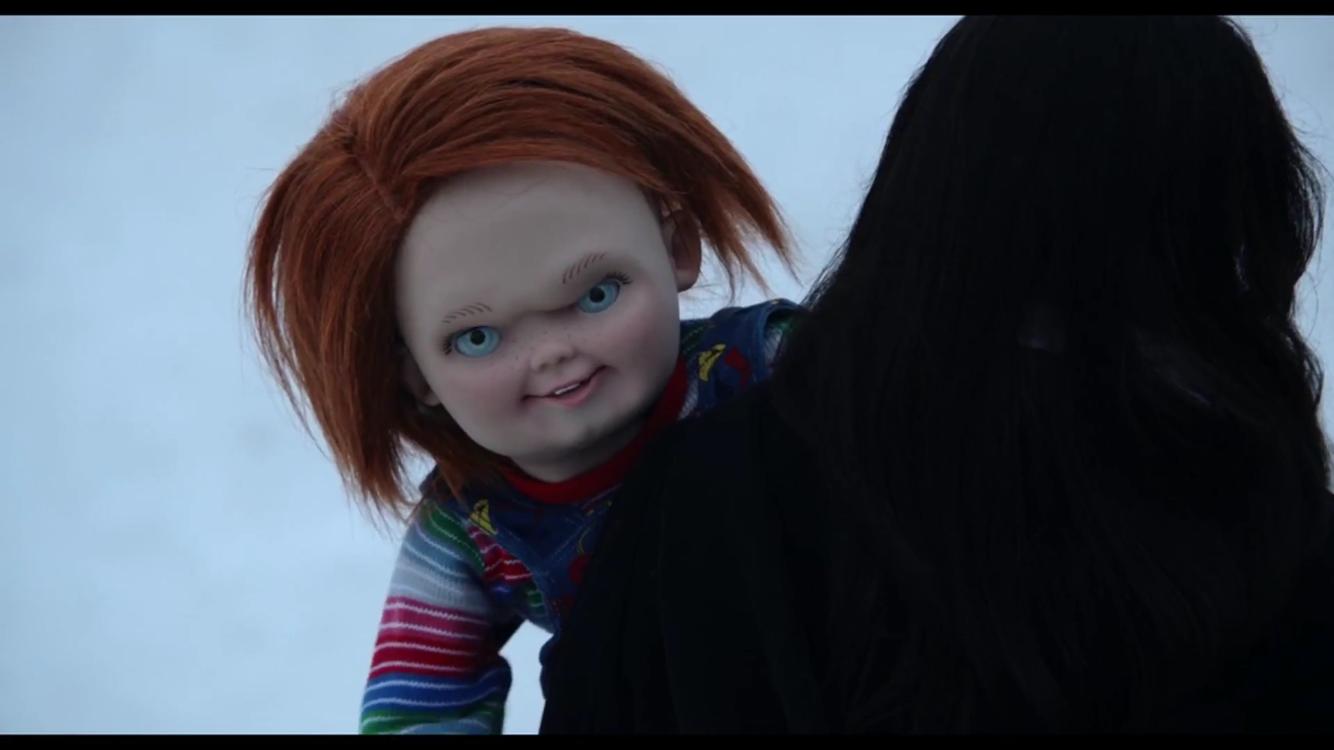 In a post-credits scene, Andy’s former foster sister Kyle from the second film enters Andy’s house, having been sent by Andy to continue torturing the original Chucky’s severed head. 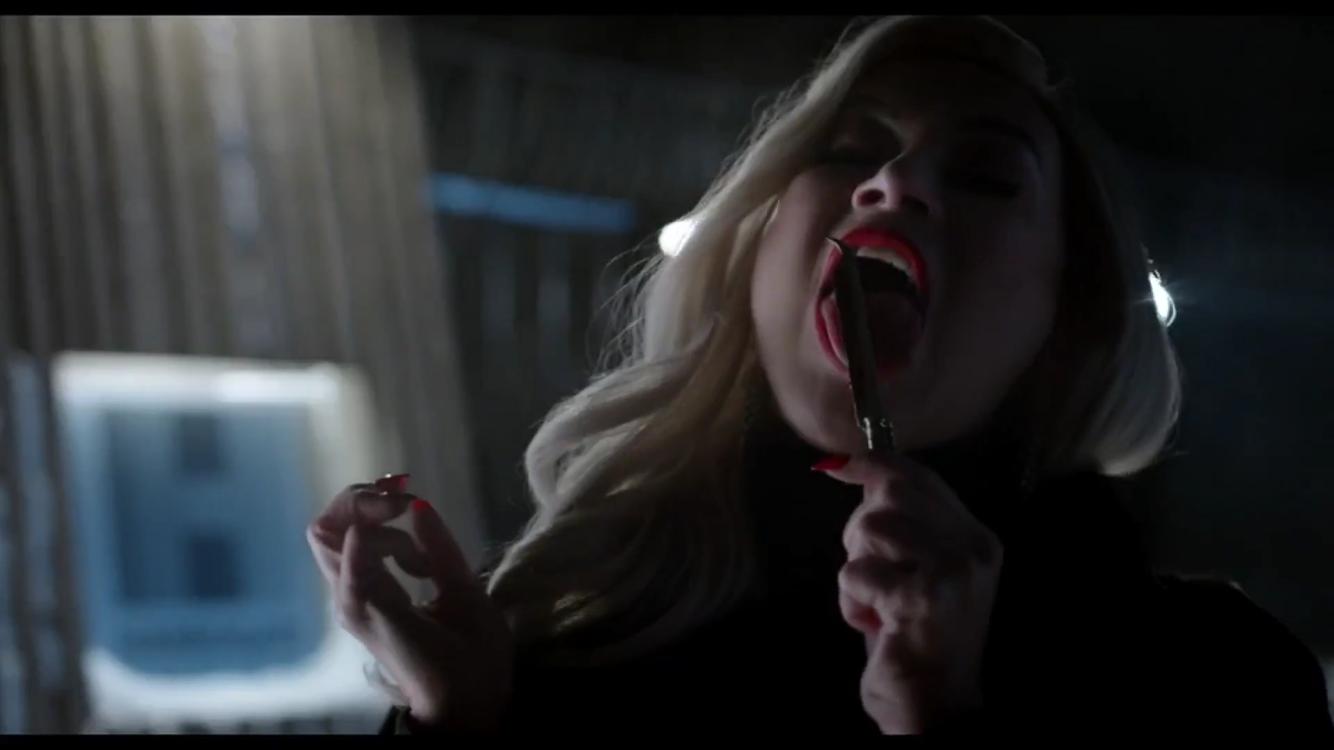 Don Mancini has created another interesting entry in the franchise and there is plenty on offer here for the fans. I would say that whatever Don has planned for the next installment will be more interesting as this one is very much a build up with a lot going on. After the two revelations at the end, one I don’t know what to think because I suppose the loss of innocence plays a part in it and another that breaks new ground and is interesting but I am not sure how Don will play it out. He sets this one up to make you really want to see what happens next and on that note, the film works and is a clever addition to the franchise