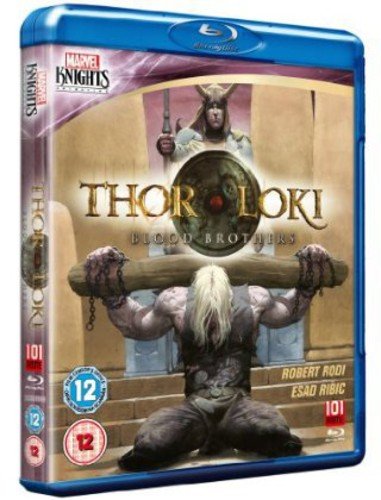 Loki has become the ruler of Asgard. However, he doesn’t have dominion over Hela, the goddess of death. Loki is demanding fealty from everyone in Asgard. Hela asks Loki for the soul of Thor for her “legions in Nifelheim”. Lady god Sif is imprisoned at the ending of the first segment. Karnilla, the queen god of Nornheim meets Loki in the second segment. She pleads for the release of Balder from imprisonment. In the third segment, Loki orders the destruction of the Rainbow Bridge. In a flashback, Odin defeats Laufey in battle. In the final segment, Loki refuses to execute Thor and spurns Hela.

To say this is “inspired by” the four-issue Loki graphic novel series of 2004 is a little misleading. The scripting, story and artwork are identical, but that’s not necessarily a bad thing. The animation is a more than a little stifled, mostly relying on computer technology to manipulate a single static image rather than produce extra frames. I find this adaptation to be fascinating. The transfer from graphic novel to albeit limited animated feature showcases the original artwork in an incredible way, adding a vibrancy to the work. The addition of the more traditional elements of Norse mythology and it’s clever integration is a very nice touch. If you liked the original source material then this you will love.