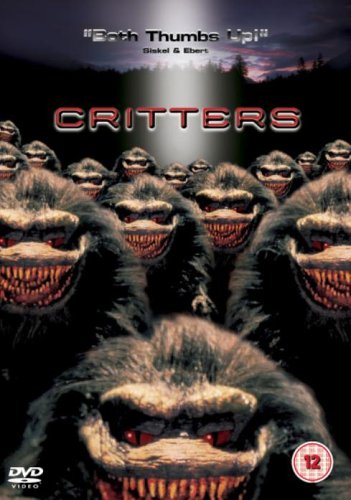 The film begins on a prison set on an asteroid, from which a group of ‘Critters’ are set to be transported to another station. When the Critters kill two guards and injure three, hijack a ship from the station, and escape, the commander of the station hires two shape-changing bounty hunters to pursue them.

On Earth, the Brown family are living in a rural Kansas town: the father, Jay; the mother, Helen; the teenage daughter, April; and the son, Brad, who keeps company with mechanic Charlie McFadden. When he and Brad are outside, shooting off homemade fireworks and playing with Brad’s slingshot, Charlie accidentally hits April with a slingshot pellet, and Brad assumes the blame on himself to protect his friend (one of his apparent only friends throughout the movie). When on the roof later, Brad mistakes the Critters’ spaceship for a meteorite. The ship thereafter lands, causing the ground to shake. Investigating, Jay discovers Brad in a tree, and allows him to come along.

Devouring the majority of a cow, the Critters are interrupted by Jay and Brad’s discovery of the carcass. The Critters thereafter consume a police officer, and later approach the farm and cut its electrical connection. Jay, Helen, and Brad go to check the circuit breaker, and Jay is attacked by one of the Critters. The Critters reveal they can shoot quills laced with a fast acting venom that tranquilizes their targets, rendering the limb or body temporarily numb or useless, and hit Jay in the right leg with one as his family struggles to pull him out of the basement. In the barn, April is attempting sexual intercourse with her boyfriend Steve when he is killed by the Critters, and Brad then kills one of them by tricking it into eating a cherry bomb firecracker he had in his pocket. Meanwhile, the two bounty hunters search the town, causing a ruckus at the town church, and then the local bowling alley. They are later recruited by Brad.  The Critters return to their ship when the bounty hunters arrive, with their leader having kidnapped April, and start the ship up to fly away and escape the bounty hunters as well as firing the ships weapons to destroy the family’s house out of pure malice; only then do they realize that Charlie and Brad were able to get April out of the ship before it took off, and Brad has thrown a homemade bomb made from Charlie’s bottle of whiskey into the ship, causing a fire which lights off both the homemade bomb and the additional fuel the ship was carrying, the explosion supposedly killing all the Critters. The bounty hunters leave in their ship after giving Brad a hand held device that they say to “call them” by, and also by which the family’s house is restored. At the very end, Critter eggs can be seen in the barn inside a chickens nest that seem to be ready to hatch.

This Movie is a perfect look of how we can take a plot that may sound sort of pathetic, and make it a hit. This movie has great special effects for its time, as well as great looks. The Critters are Nasty looking and can give you quite a scare. You cant look at this movie as a modern aged and modern special effects man. This was 86, and not the biggest time of great effects