It’s been ten years since we last saw Katee Sackhoff suit up as Kara “Starbuck” Thrace in the critically acclaimed series Battlestar Galactica, and now she’s taking to the stars once again in her new Netflix series Another Life. This dark intergalactic adventure sees Sackhoff leading a team of scientists on a mission to uncover the truth about a mysterious alien vessel that has appeared on Earth. Unfortunately, despite the show’s best efforts to channel Sackhoff’s earlier sci-fi success (along with several other notable staples of the genre), it struggles to establish its own identity in a season filled with underdeveloped characters and stakes that somehow manage to simultaneously feel both too high, and not quite high enough. 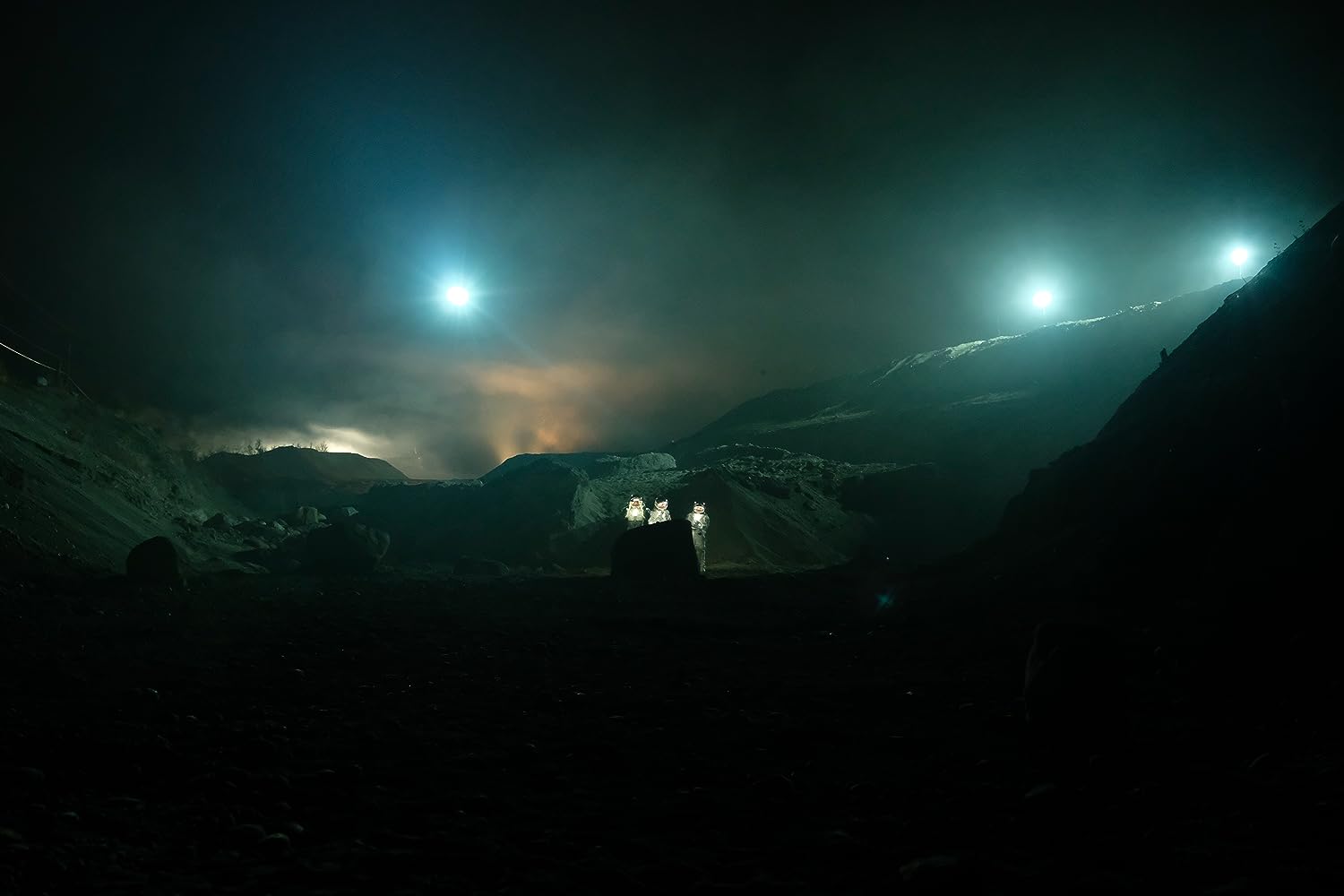 From creator Aaron Martin (Slasher), Another Life opens on influencer-journalist Harper Glass (Selma Blair) watching as an alien spacecraft (which resembles a giant, metallic Möbius strip) passes outside her window. It eventually lands in a field, where it promptly cocoons itself in a shimmering crystalline shell, reminiscent of Annihilation’s Shimmer. This is the last we see of Harper in the pilot episode; she won’t reappear until midway through episode two, which feels indicative of the show’s general lack of focus when it comes to its large supporting cast. They appear when the plot requires it, and feel as though they fizzle out of existence the second they leave the screen.Following the arrival of the alien craft, Another Life jumps ahead six months in time, switching perspectives to Niko Breckenridge (Sackhoff), her husband, Erik Wallace (Justin Chatwin), and their young daughter Jana (Lina Renna). Erik is a scientist who has been studying the “Artifact,” as the humans have come to call the alien structure. While he and his team haven’t made much headway in determining who the aliens are or what they want, they do know that the Artifact is sending signals out into space, and Niko has just been appointed as the commander of the ship tasked with following those signals to their destination, Pi Canis Majoris. Neither of them really want Niko to go, but she worries that without her, the mission will fail, putting their family in jeopardy.So Niko heads off on the Salvare, where the plan is to spend most of the months-long mission in induced soma sleep, but of course, there wouldn’t be much of a series if everything went according to plan. A month into their journey, Niko is awakened by William (Samuel Anderson) the ship’s holographic onboard computer, who has been programmed to be the ideal complement for Niko — which makes sense — and also, bafflingly, to feel human emotions, including fear, anger, and uncertainty, which is a little perplexing given that William controls every system on the ship. I have a hard time coming up with a scenario in which it makes sense to give a glorified auto-pilot the potential to have a panic attack if things get intense (and they do indeed get very intense), but okay. Despite taking itself extremely seriously, Another Life is not a series that welcomes peeking underneath the hood to examine its internal logic, so it’s best to just let it be.

Unsurprisingly, William informs Niko that the Salvare has encountered a complication while en route to Pi Canis Majoris, and soon the entire primary crew has been awakened in order to deal with it. I say “primary” crew because the Salvare also has a seemingly limitless supply of backup crew members still in soma sleep, conveniently stowed away in their soma pods until the moment they’re needed to take over for a member of the primary crew who is no longer able to serve their function. But we’ll get to that in a minute. This crew consists of a dozen diverse twenty-somethings, ostensibly chosen at least in part for their youth; one character explains in the pilot that cowardice tends to flare up after people turn 27, and that it therefore makes sense to staff a dangerous mission with a crew who won’t shy away from risks. This logic doesn’t entirely track — both Niko and her second-in-command, Ian Yerxa (Tyler Hoechlin)are in their 30s — and is one of many, many examples throughout Another Life’s first season of the show doing its best to answer small questions no one was asking, while ignoring other, much bigger ones.

Chief among them: who are all these people? Another Life has an intimidatingly large cast, and with the exceptions of Niko and Erik, it doesn’t seem particularly interested in exploring who any of them are. I spent most of the ten-episode season barely able to recall any of the Salvare crew’s names or jobs, and there’s a few whose roles I still can’t quite pin down. It doesn’t help that Another Life has a shockingly high body count, with multiple members of the Salvare’s crew dying horribly every couple episodes. However, those deaths don’t carry the weight they should, for either the viewers or the characters. We never get to know these characters well enough to really mourn their loss, and the endless supply of backup personnel ensures that the Salvare will never have to operate with less than a full crew, making the life-or-death stakes feel both too extreme — watching one shallowly drawn character after another die excruciating deaths becomes rapidly exhausting — and weirdly meaningless.

The only characters Another Life imbues with any real sense of history or interiority are Niko and Erik, who each do their admirable best to carry their respective storylines, Niko on the Salvare, and Erik back on Earth, doing his best to solo parent Jana while continuing to study the Artifact. Sackhoff and Chatwin each give earnest performances (although Sackhoff does occasionally succumb to the urge to chew the scenery, and often defaults to a facial expression I can best describe as “Blue Steel intensity”), making it easy to buy into their relationship, despite their limited screen time together. But for every flashback (or occasionally, more inventive method) used to explore their identities and backstories, it becomes even more glaring how little Another Life is willing to dig into the rest of its characters. With so many people to keep track of, I found myself longing for the show to deep-dive one supporting character at a time, rather than spend so much energy on Niko while giving the rest only the most surface-level treatment.

Throughout its first season, Another Life intentionally channels a number of intense sci-fi films such as Alien, Arrival,or Annihilation, although it’s debatable whether including such heavy parallels to highly acclaimed properties works in its favor, or whether they simply function as a reminder of all that Another Life isn’t. However, as I watched, I couldn’t help drawing comparisons to other, perhaps less-obvious shows like LOST or even Game of Thrones, which also had large ensemble casts and a tendency to brutally kill off principal characters without warning, but were skilled in developing those characters in ways that made their deaths uniquely devastating. Even in their first seasons, deaths on those shows were heartwrenching, not just because death is innately painful, or because the circumstances were objectively horrifying, but because we had emotionally invested in those specific characters, and it hurt to lose them.

More than anything else, it’s this lack of specificity that holds Another Life back in its first season. Despite its familiarity, its premise is still intriguing, and while the pacing can occasionally get bogged down in undercooked subplots that don’t seem to tie neatly into the main thread of the series, the show is adept at ending each episode in a way that had me immediately reaching for the remote, eager to start the next one. And although I wished for more conflict that stemmed from the characters’ actions as opposed to originating externally, Another Life still manages to keep the moment-to-moment excitement pretty high. But the series’ failure to invest in any of its cast outside of Sackhoff and Chatwin means that even when Another Life is functioning at its best, it still feels as though it’s holding its audience at arm’s length.

It’s a shame, because there’s a ton of unmined story potential in the characters of Another Life, who are diverse across a variety of spectrums, including race, sexuality, and gender. It’s only toward the end of the season that the show begins hinting at more in-depth storylines and relationships for a few of its secondary characters, who have spent most of the season running, screaming, and spouting exposition-heavy technical dialogue. Yet even those brief glimpses at what might lie ahead already feels more compelling and interesting than most of the narratives they’ve been given up until that point. There is a much better, more emotionally affecting show lying just beneath the generically futuristic trappings of Another Life, but in its first season, it fails to develop its characters in a way that would give its extraterrestrial threats and space-horror scares any sort of significant weight. As such, despite some intriguing central mysteries — what is the Artifact? Who sent it? And what do they want? — the series has a hard time getting me to invest in finding answers. I can only hope that, should Another Life receive a second season, it spends a little more time building up the connections and conflicts within the Salvare itself, so that it’s all the more terrifying when the dangers lurking outside threaten to rip them apart.